I guess if the big boss is making it public, it’s safe to say that Reclaim Hosting has been helping Coventry University get up and running with a pilot of Domain of One’s Own (DoOO). As I alluded to in a previous post, hosting Coventry Domains on Digital Ocean has enabled us to comply with Europe’s data privacy requirements while offering a fast, seamless experience. In fact, given the miserable day we had with our Reliable Site datacenter in New Jersey, having Coventry Domains hosted in Digital Ocean’s London data center has been a total godsend. There will be more of that to come soon. 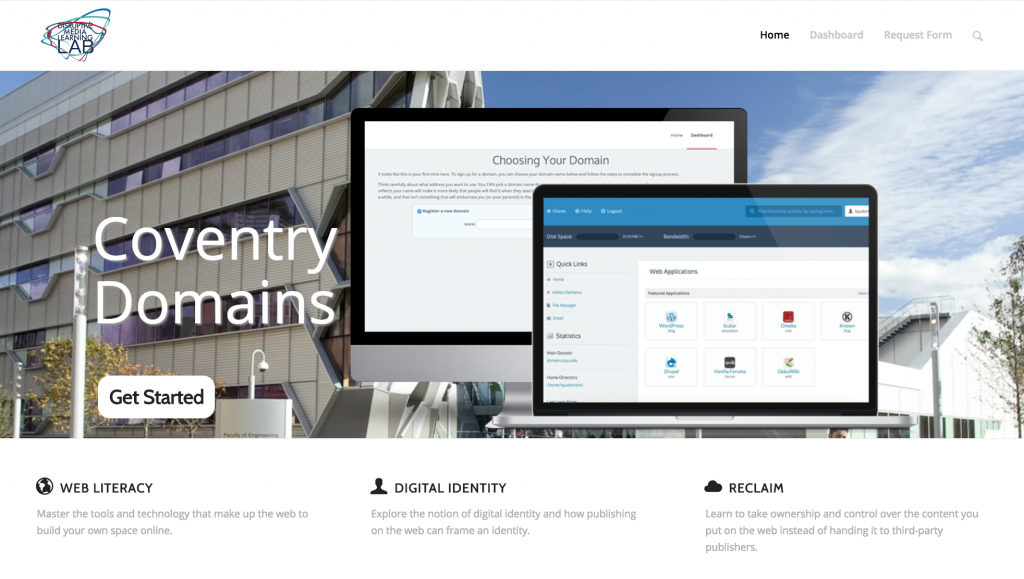 This is pretty exciting for both Coventry and Reclaim because this is officially the first school in the UK (Virginia Woolf would be proud!) that is exploring Domains on a broader, institutional scale. One of the things that has had me blown away over the last two days of workshops (I’ve done 6 already and there will be 9 all told) is the turn out. I’ve helped a number of schools get up and running with a pilot, but I have to say that Coventry’s roll-out is not feeling very pilot-y. I’ve met with more than 50 faculty and staff the last two days, and there are 30+ more scheduled for tomorrow! Crazy, and a number of faculty have modules (the strange term the English use for courses) with as many as 80-120 students they want to get up and running with digital portfolios, project sites, blogs, etc. I have been extremely impressed by the enthusiasm of faculty and staff—that have been waiting for this. And as I already joked on Twitter, they may very well need a bigger boat.

Really impressed with turn-out and interest in Coventry's Domain of One's Own initiative. I think they're gonna need a bigger boat 🙂

The lion’s share of the credit for making all of this happen goes to Daniel Villar-Onrubia, who has spearheaded and led the initiative quite adeptly. Daniel works at Coventry’s Disruptive Media Learning Lab (which is sponsoring this pilot), and he has tirelessly seen this project to fruition over the last five months—which justifies major kudos. Institutional due diligence and attention to process in Britain can invoke scenes from Dickens’ Bleak House at times 🙂 I was particularly touched when Daniel introduced me as a Visiting Fellow at the Disruptive Media Learning Lab—it felt like old times. I’ve been holed up in my Italian mountain fortress for the last several months, so working intensely with Daniel to get Domains out in front of the university community for the last two days has been equal parts exhilarating and exhausting.  We make a good team, and it reminded me a bit of all those beginnings of the semester at UMW we spent getting folks fired up about publishing on the web—that never gets old for me.

I have more to blog about regarding my time at Coventry, catching up with the great Helen Keegan and the Game Changers (great band name, right?), talking living rooms and buses, etc. But Daniel has me on a tight and early schedule—he is a bit of a task master—so I need to have my tea and biscuits before hitting the kip. Cheerio!

This entry was posted in Domain of One's Own and tagged Coventry, Daniel Villar-Onrubia, DMLL, domains, reclaim. Bookmark the permalink.