A Monument to Trentino’s Founding Father 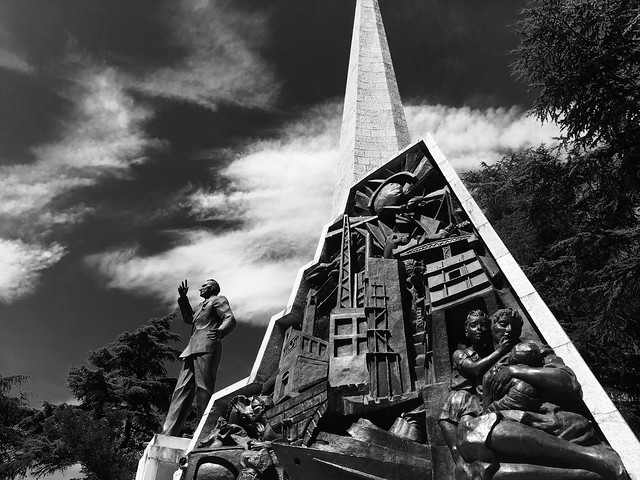 In a couple of weeks I’ll have been in Trento for a year, which is mind boggling to me. As some may have guessed who follow me on social media, I’m enjoying myself immensely. This has arguably been the single best year of my life, if only for having more time on a daily basis to hang out with the family. Add a solid, sustainable model for ReclaimHosting and Italy as the change of venue—and you have a perfect storm of awesome. I know these things can never last, so I am trying to savor it.Anyway, I’m starting to get used to the idea of actually living in Trento rather than being a long-term tourist, and I am beginning to see and understand the city and its history a bit better. A recent example of this is the monument to Alcide De Gasperi in the park adjacent to Trento’s Piazza Venezia.

I had heard bits and pieces about De Gasperi over the last 15 years since I first started coming to Trento, but not until I started taking the kids to camp this Summer in the park near Piazza Venezia did I start to get a sense of his importance in the political reality of post-war Italy. De Gasperi helped found the political party Democrazia Chrsitiana after World War II which became the predominant political party alongside the Communists (with Post-War Italians fairly split in their allegiances between the two). De Gasperi was an staunch anti-fascist during the war, in fact he had run-ins with Mussolini who briefly lived and worked in Trento as a journalist. Beyond the Democrazia Chrsitiana party,  his larger vision  was the idea of unifying Europe politically—a gutsy move post WWII. This visions remains of particular relevance these days as does his role in imagining and architecting what would become the European Union. Alongside Robert Schuman, Jean Monnet, and Paul-Henri Spaak), De Gasperi felt that in the wake of two devastating World Wars and countless losses the best way to establish peace and prosperity was to unify the continent under a single military. The unified Army proposal was shot down by France, but the first brick in what would become the European Union community came in 1950 with the European Coal and Steel Community. 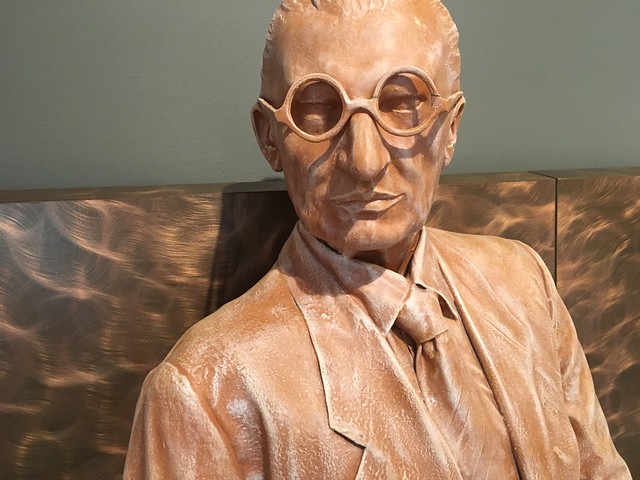 So, you get the point. De Gasperi was a big deal in post-war European politics, and he’s a native son to Trentino. He was born in the small, mountain town Pieve Tesino on the border with Alto Adige—this idea of his being from a border zone (culturally and linguistically) is a fact his birthplace museum suggests was crucial to his political vision for the EU. 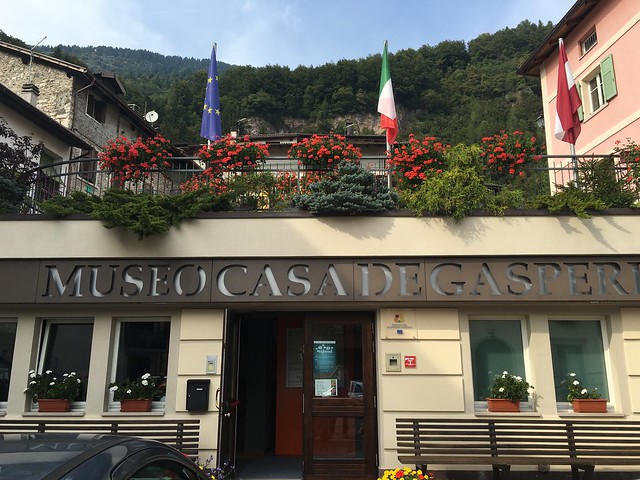 We actually visited his birthplace museum after a hike to a river nearby, and on the particular Sunday afternoon we visited Pieve Tesino it seemed like something out of a Twilight Zone episode. Abandoned, and if you look at the census stats it has been losing folks consistently since the 1920s. It was a gorgeous, small mountain town, and the border town between Trento and Alto Adige, or even Italy and the Austro-Hungarian Empire if you travel back before World War I. 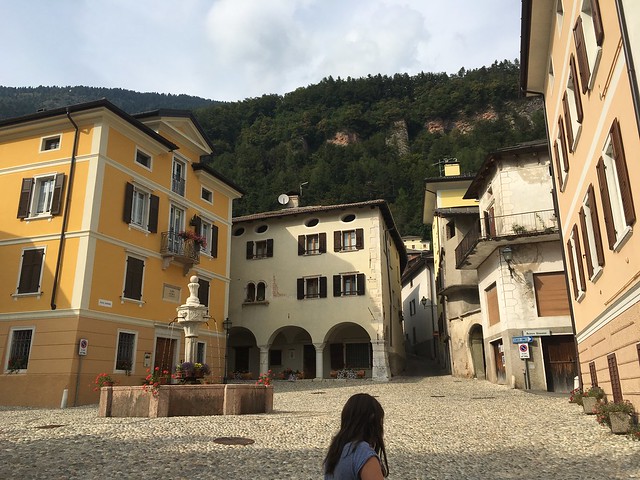 But what started this whole thing was the crazy monument to De Gasperi in Trento’s Piazza Venezia created by Florentine sculptor Antonio Berti in 1955-56. What is so wild about it is the way in which the monument uses allegory to tell the story of the pre and post-World War II Italy through the figure of De Gasperi. The monument has a statue of De Gasperi with a obelisk monument behind him, the reliefs on the horseshoe like perimeter is what caught my attention though. The panel on the left tells the story of war-torn Italy in chaos, where the right shows a harmonious vision of Italy post-war. And the difference between (literally) these two visions is De Gasperi. 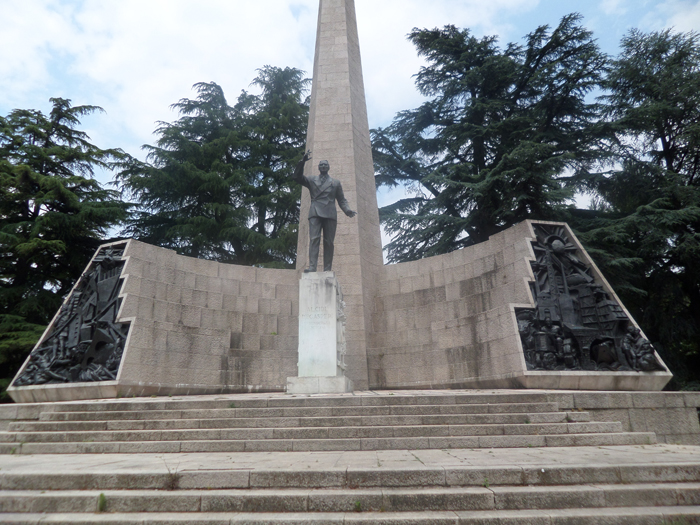 I took some shots with my phone and I added the noir filter as I was blown away. At first I tweeted these visuals were seemingly Fascist in their aesthetic, but on further viewing the panels seem to be inspired by German expressionism and the Futurists (Fortunato Depero was another native son), not to mention some real Soviet visions of labor and harmony. Anyway, I’ve talked enough already, below are a bunch of detail shots from the monument of the chaos and harmony panels, wonder if you can tell which is which  🙂 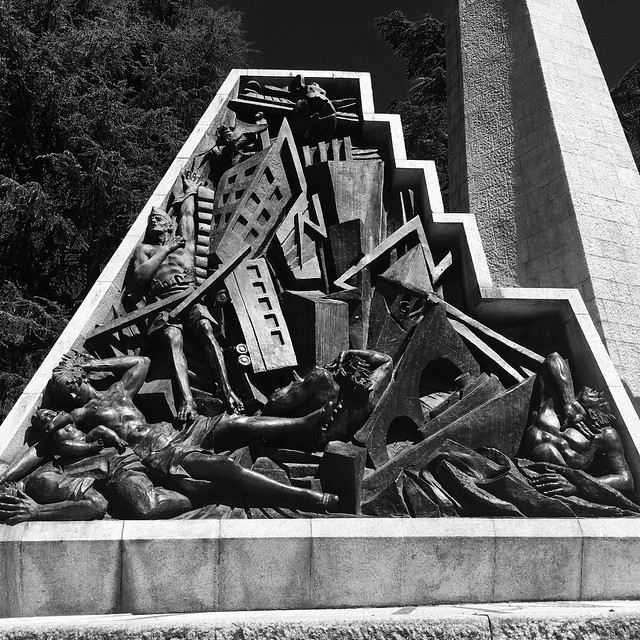 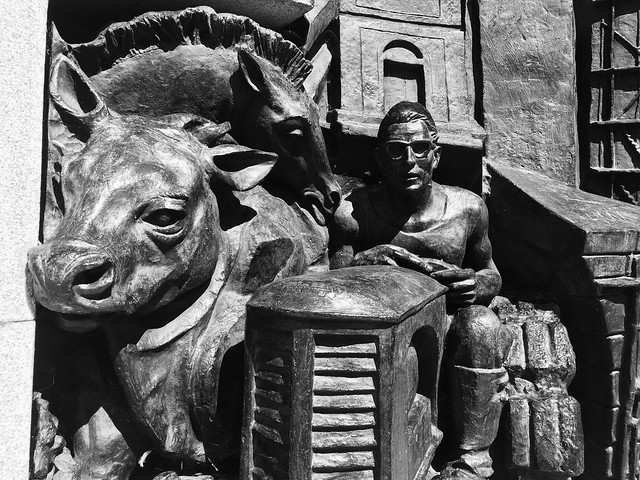 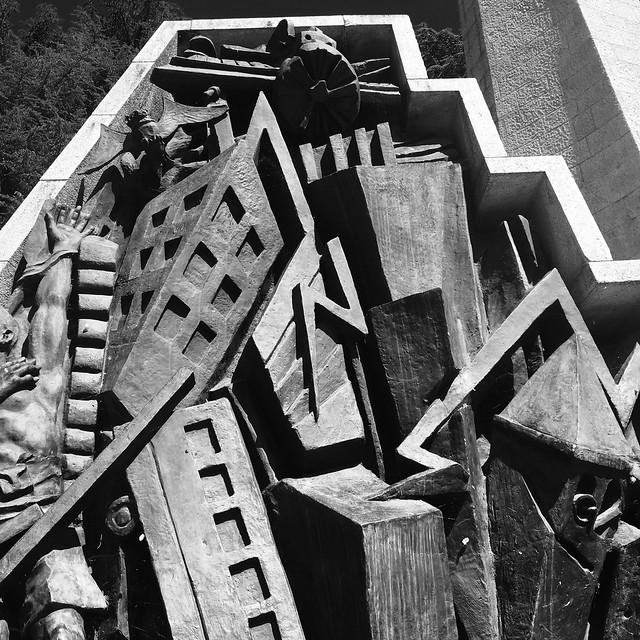 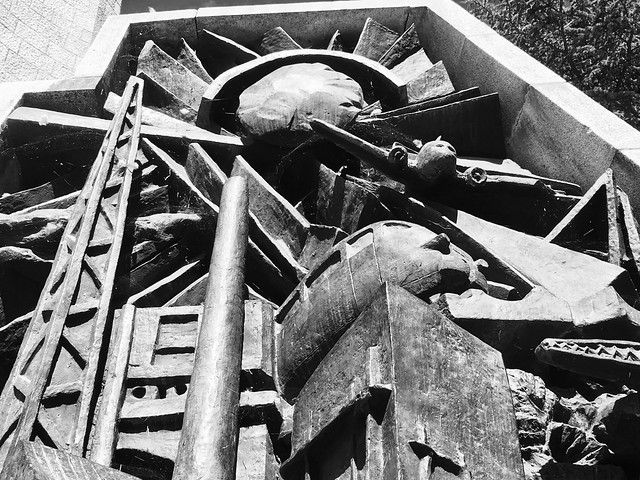 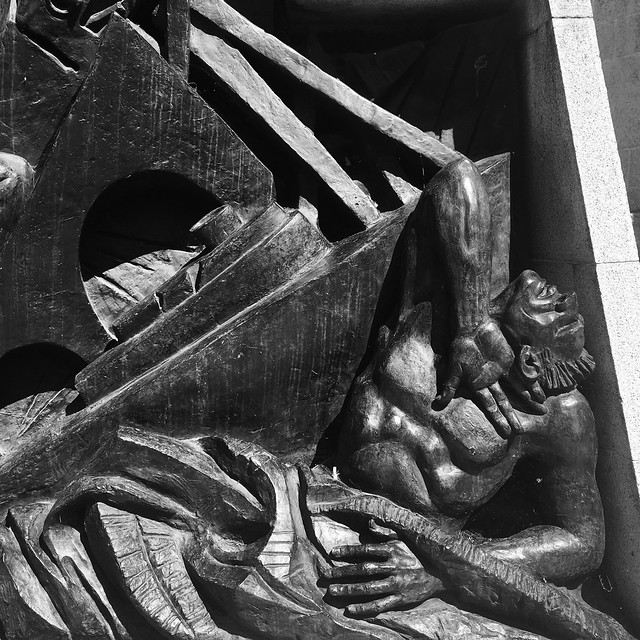 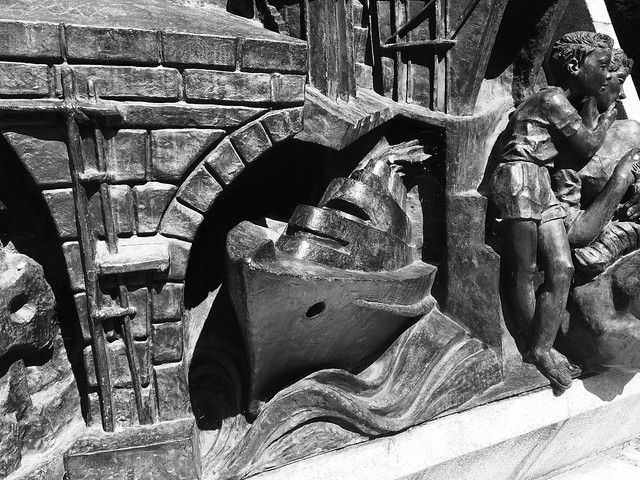 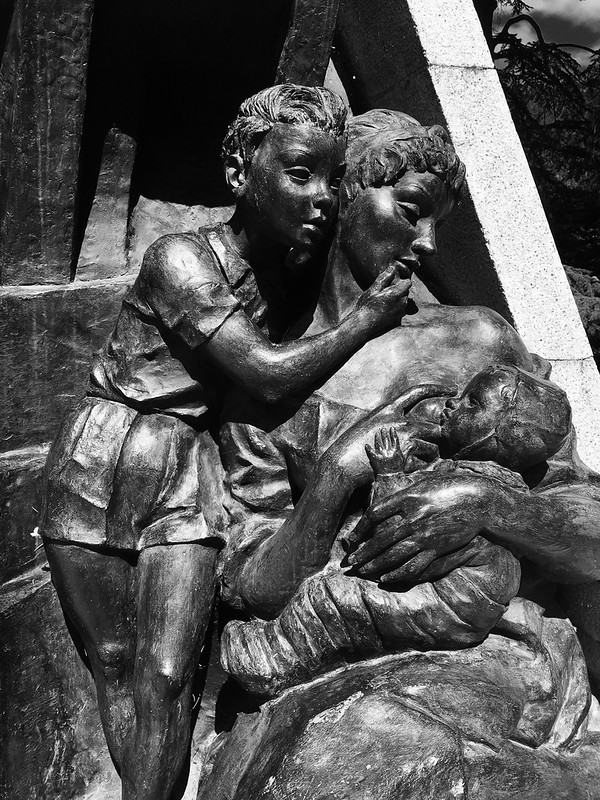 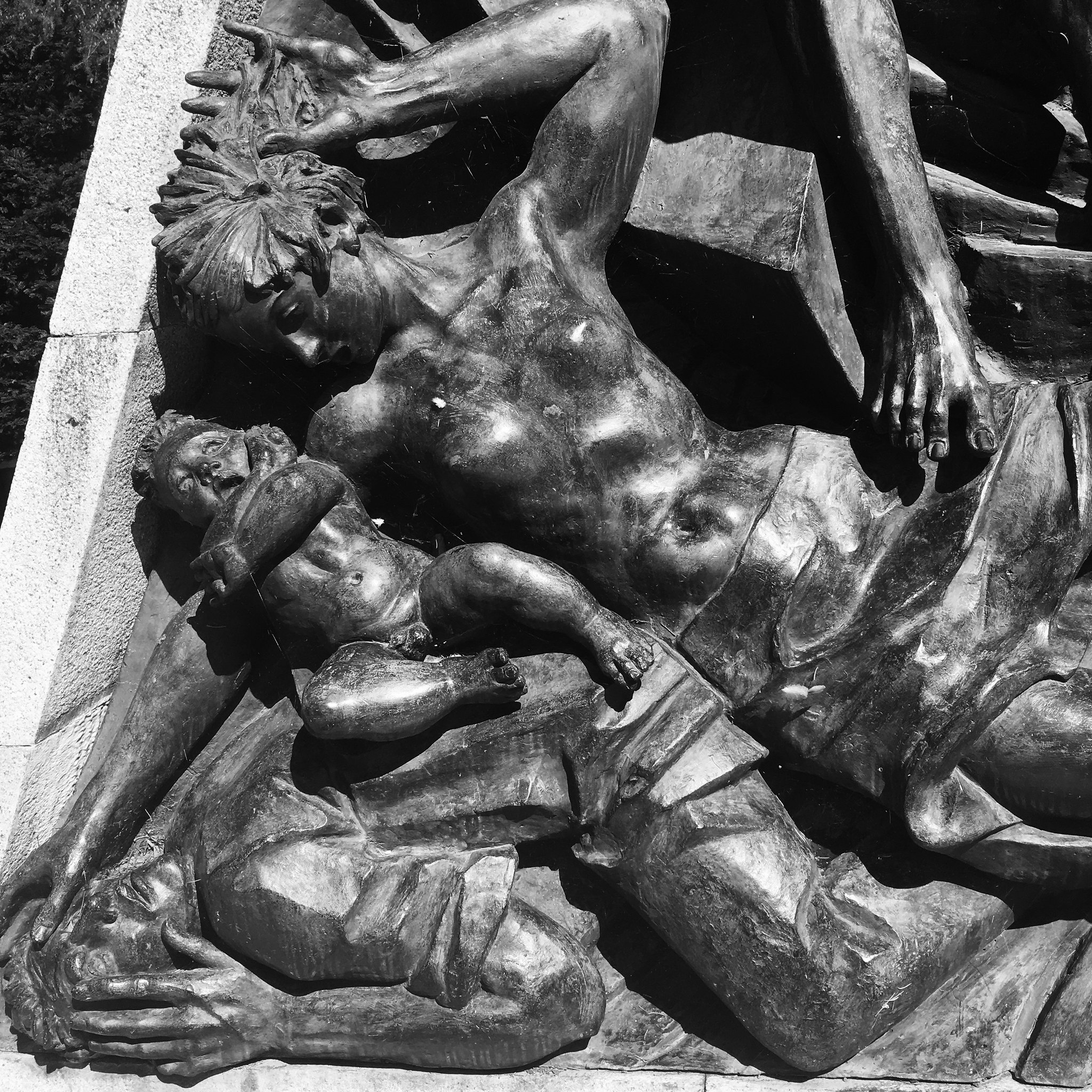 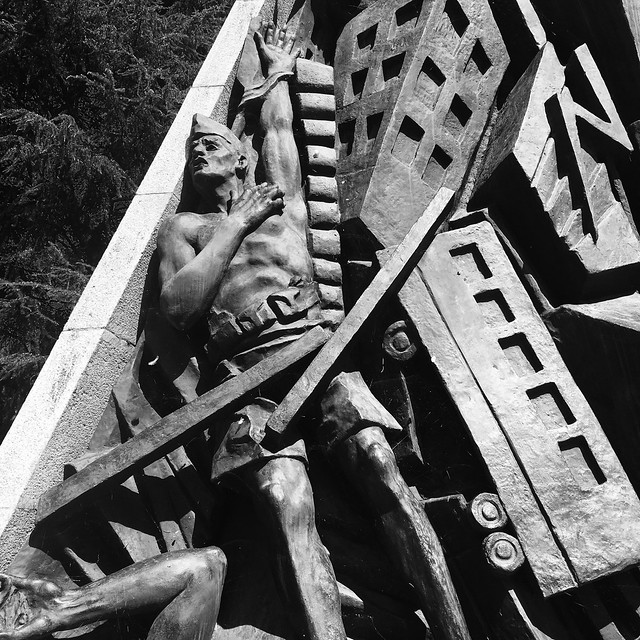 I can’t tell you how many times the last year I walked by this monument and never noticed the allegory of Italy during and after World War II. This is one of the things I really enjoy about Italy, the way in which there are stories written all over the built environment that span centuries of civilization. This one is fairly obvious, I just wasn’t looking very closely. But it is a good place to start reading the history of  these spaces all around. It’s both intimidating and exhilarating when I think of the expanses of time and experience all around me.

1 Response to A Monument to Trentino’s Founding Father