I like quoting movies (often butchering the lines) and repeating stupid sayings ad nauseam, things like “On a scale of 1 to 10,” “Big Fan,” “#4life,” etc. I tend to denature these terms. None of them are really unique to me, I just repeat them so often in every possible context that they become oddly funny-at least to me. I have been working intensely the last few days at Coventry—9 workshops to 72 faculty* in 3 days (not counting other meetings, lunches, etc.). I never presented about domains to that many faculty in such a focused way before, and I have no doubt Coventry is going to have some seriously interesting folks pushing on their Domains project. Major kudos to Daniel Villar-Onrubio, he got the folks there, tolerated my nonsense, and we made a pretty solid team delivering the good word of domains to  the people. And they were listening!

Been an absolute pleasure spending time w/ the reverend @jimgroom again at @disrupt_learn 11 outta 10 for the Domain of One's Own workshop!! pic.twitter.com/SLG4TmtkYB

I like to talk (especially to talk shit!) and I like to convince folks that they should take an active role in using the open web for their teaching and learning agendas. The last 3 days was just that, non-stop. One of the things that starts to happen to me when I get sucked into a process like this is that I become manic. I start getting giddy and feeling high and I want to joke even more. That’s what started happening late yesterday and all of today. My talks began to incorporate a kind of fake tension between Daniel and I that started to make folks laugh uncomfortably and be like, “Wait, what?” I love that feeling of something being just a bit off, and while it doesn’t always work, it makes things more fun (again, at least for me). What’s more, Daniel started talking shit right back at me today suggesting I am far funnier when I have a partner, someone like, say Brian Lamb. And then it happened, I posed the question to Daniel. On a scale of 1 to 10, how would you rate my presentation performance so far…. 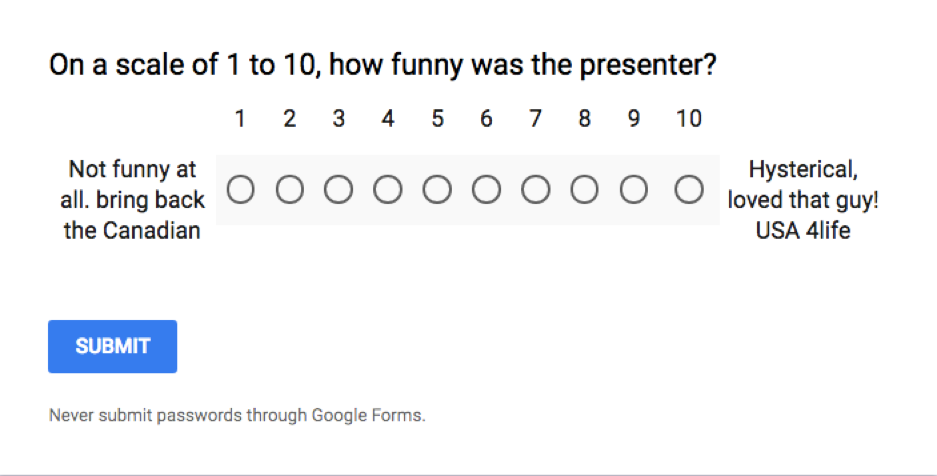 And that’s when Daniel crushed me.

And we had a schtick for the rest of the day that made the last of these sessions a bit funner. What was also interesting, as we began pulling folks from the sessions into the banter, was everyone was like, “8.5, that’s quite a high score!” Turns out a 75/100 (or a 7.5 for the sake of my scale) is basically the highest grade you can get in Britain. So then the fact that I was a grade-inflating American that expected to get 10s and 11s all around became an alternative narrative. It was fun, I laughed and it was a healthy way to channel my manic energy.

I’m not sure what I am really saying in this post other than I really enjoyed working with Daniel on the Domains project at Coventry the last 3 days, and that we both missed Brian dearly. I give Daniel and Coventry a 10 out of 10, even if they think my likert scale promiscuity untoward.

*Daniel took attendance and he did a final tally, so we introduced Domains to 72 faculty in 3 days. Eat your heart our Rick Wakeman!

This entry was posted in Domain of One's Own and tagged Coventry, domains, Scale of 1 to 10. Bookmark the permalink.