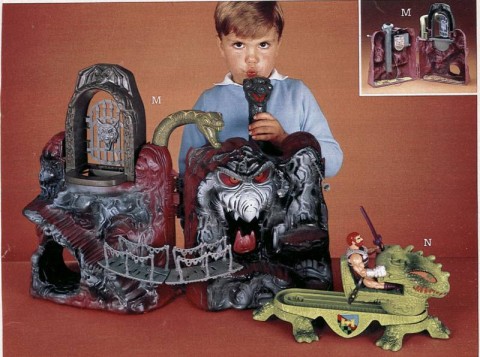 Mattel’s Snake Mountain had pretty impressive design in terms of the facade, the rotating snake and laughing mountain mouth were pretty wild.  And while the backside of the toy was pretty lackluster at best (no comparison to the Fisher Price Castle, that’s for sure) which suggests the lack of attention to detail for many of the mainstream toys during the 80s, it was the electronic echo microphone of wolf’s head that distorts your voice into a demonic cackle that really made this set memorable for me. I used to chase around my little sister and her friends with this and pretend I was a monster—and it was a blast. The Masters of the Universe figures played a significant role in my collection of early 80s toys, so I imagine I’ll have more to talk about from this line of toys over the course of the series. What I wouldn’t do for a wolf’s head microphone right now to raise the level of my playing monster with my kids, it would change the game.

The commercial for Snake Mountain gives a quick overview of this set, and check out the wolf’s head microphone, genius!

This entry was posted in 1102xmaS and tagged 1102xmaS, He-Man, Masters of the Universe, toys. Bookmark the permalink.