DIY Video Games at the V&A

Last weekend the whole family spent a few days in London and it was a blast. I’ve been to London a few times over the last two years, and I’m a big fan. We did a bunch of things, but I’ve been unable to shake the Video Games Exhibit at the Victoria & Albert Museum, so I figured I would blog a bit about it.

It basically focused on a number of fairly recent games (last 10 years or so): Journey, The Last of Us, Bloodborne, Splatoon 2, Consume Me, Kentucky Route Zero, and No Man’s Sky (I may be missing one or two). The vignettes explored various design elements that make the selected games unique, essentially arguing that the last 10-15 years has been a particularly fecund period for video game narrative and design. For example, with the The Last of Us the focus on the AAA (mean big budget) approach to The Last of Us with hired actors, extensive green screening, and the robust character development of the main character Tess (a name near and dear to my heart). 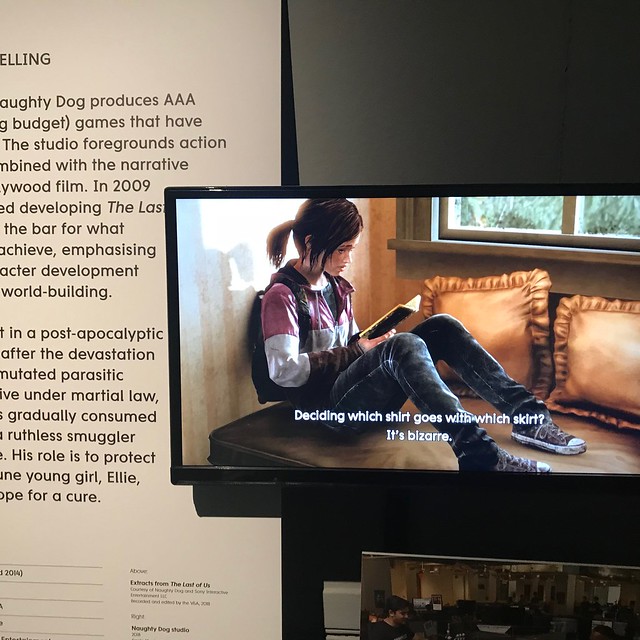 The also had the very analog approach to the game narrative that I really enjoyed. Seeing the game development outside the screen was quite compelling (and the same was true with Journey). 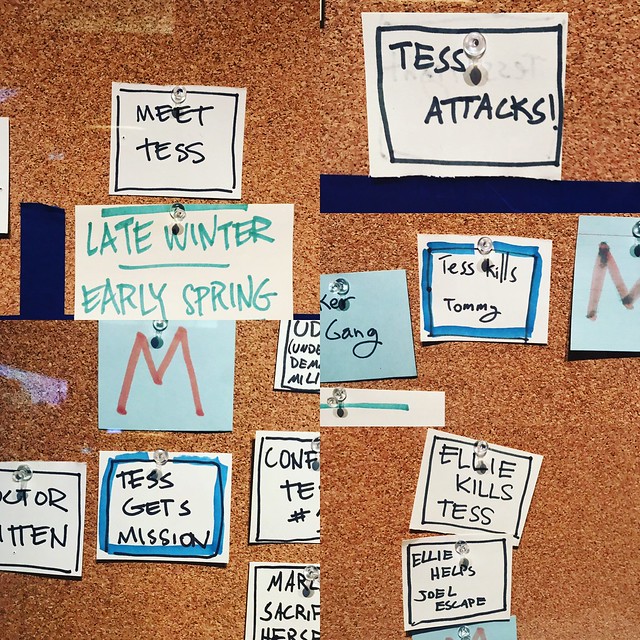 The concept art for the grown over infrastructure that defines the world of The Last of Us  was powerful, it’s work we can come to take for granted in the artistic process—but this exhibit laid it bare again. I appreciated the way in which the exhibit integrated the various complex components of acting, art, design, and narrative that frame a game before it even get to the programming stage. 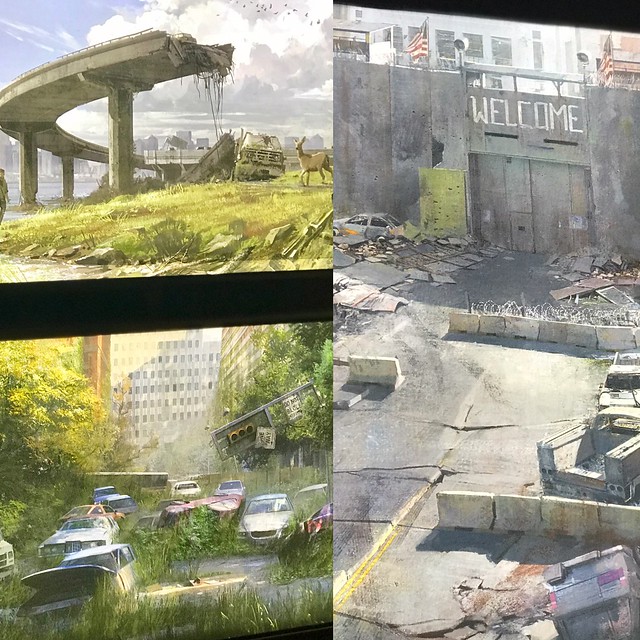 And the exploration of narrative continued with the discussion of a game I had not heard about before seeing the exhibit, namely Kentucky Route Zero. This is an Interactive Literature game that framed its relationship to a wide range of literature, experimental films, surrealist artists and the history of computing and technology. I have not played this game, but after the discussion of the various influences and plays through I am planning on it. 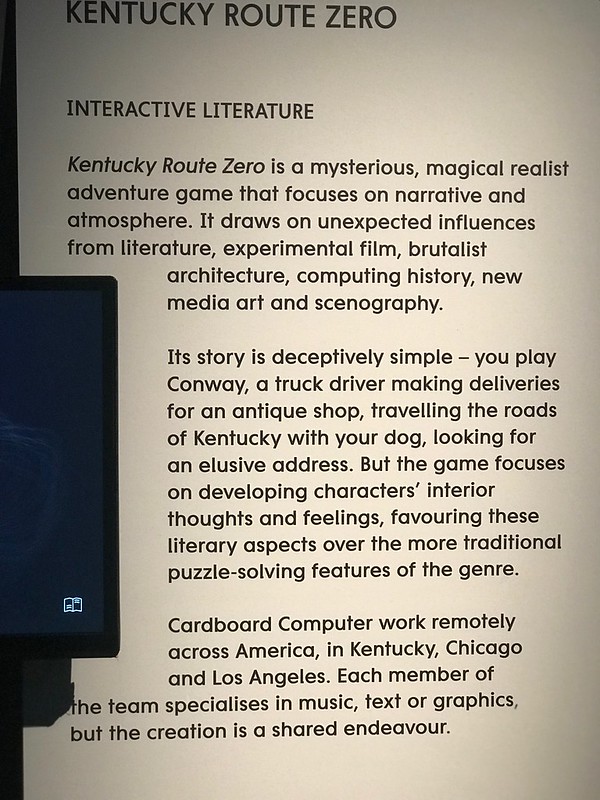 The following screenshoted moment from the videogame is playing on the painting Le Blanc Seing by René Magritte. 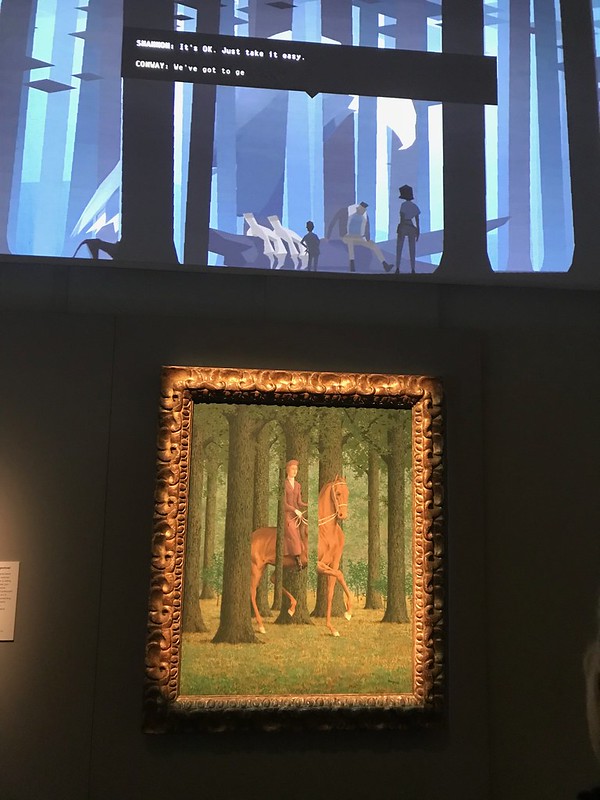 An another influence was Jane Veeder’s 1982 video art piece Montana, the first of its kind, and a brave new world of early 8-bit video graphic art for me.

There was also an interesting breakdown of the mobile game Consume Me by Jenny Jiao Hsia, a puzzle game that frame questions around body image through her compelling imagery. 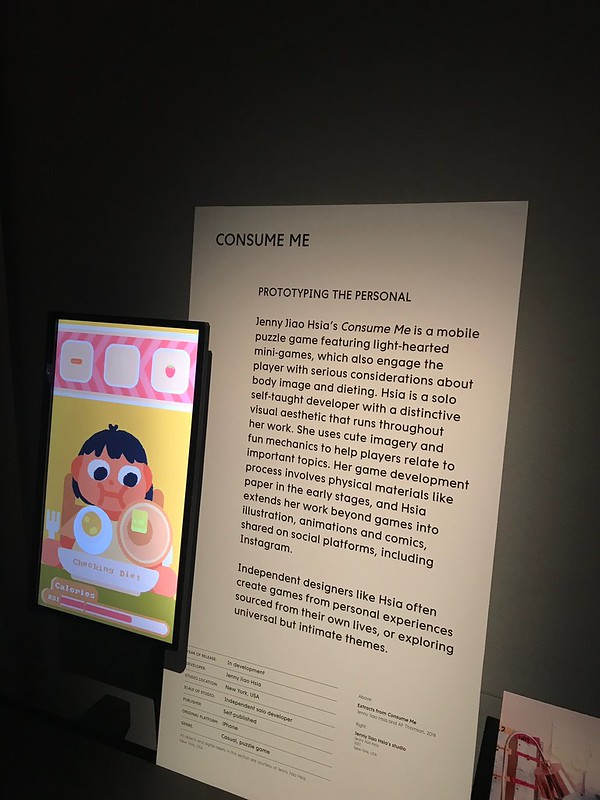 You could play the game, and it was fascinating how consumed those who did became, almost a double entendre of the game’s name. 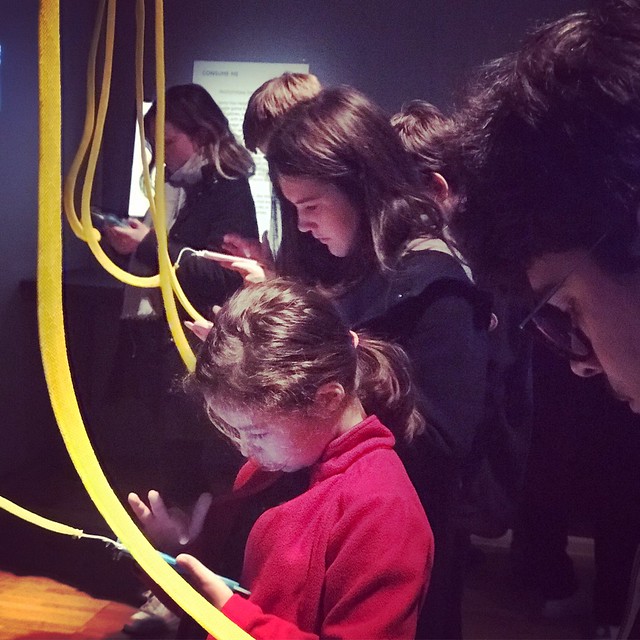 Another game I need to explore is No Man’s Sky, the aesthetic is deeply rooted in the 1970s scifi aesthetic I have found myself drawn to more and more these days.

The game features a procedurally generated, open world universe, which includes over 18 quintillion planets. I have no idea what that means, but the screenshots are quite compelling. Miles warned me it’s not that good, but I want to cruise around it for the aesthetic experience more than the gameplay. 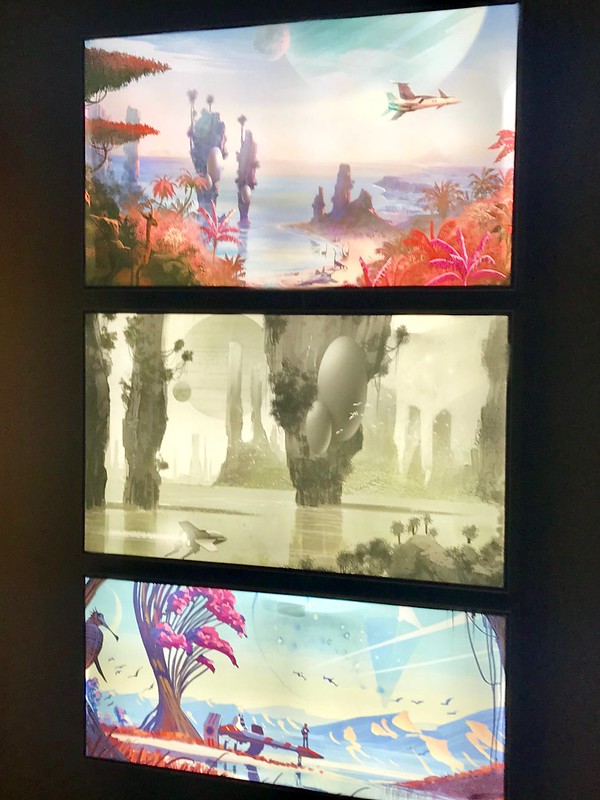 But the thing that most compelled me by the exhibit was the final room which featured a bunch of DIY arcade cabinets. 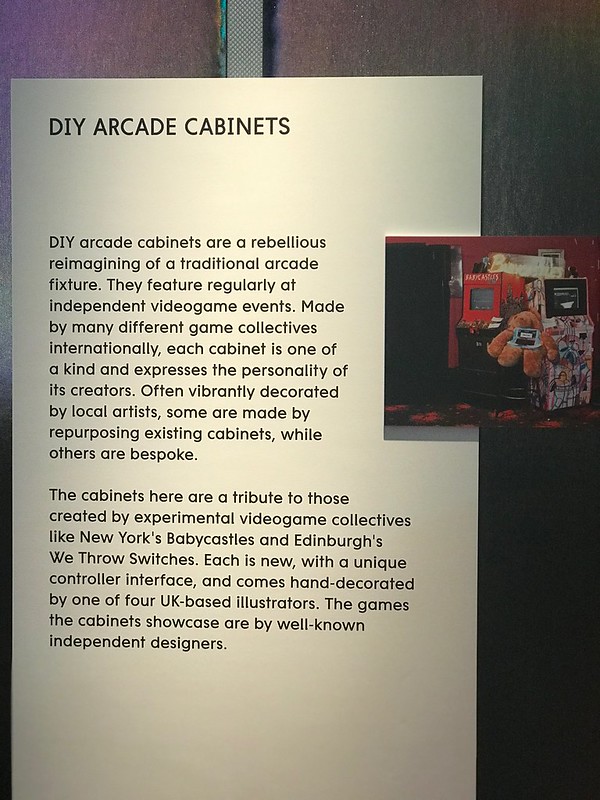 Much of which is linked to a “players_offline” idea, wherein folks go to a place to both create and play these games, and they are quite awesome—and according to the following placard define a “punk scene” within the gaming culture where anything is possible and nothing predictable. 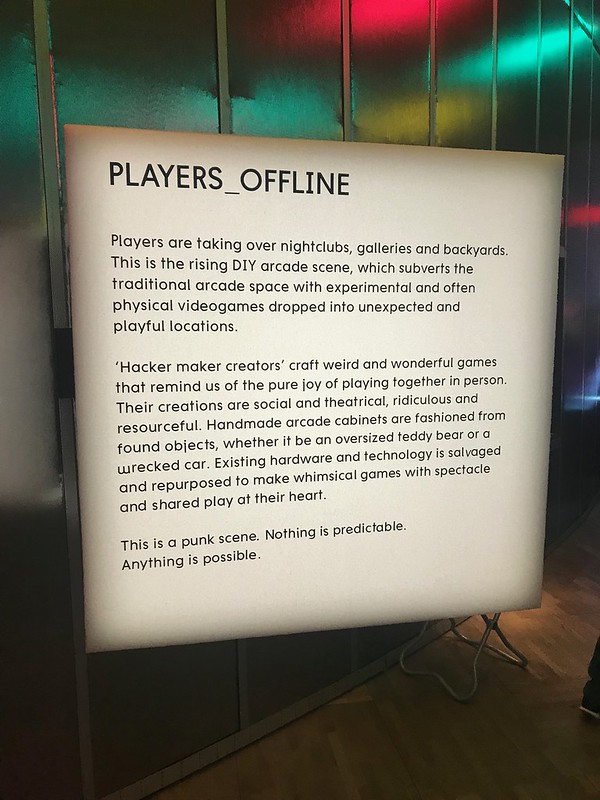 That’s all fine and good, but were the games any good? Actually, they were damn good. The Queers In Love at the End of the World cabinet is a crazy game wherein you have like a split second to make a choice as the world is ending. it is all text-based, and remarkably compelling and compassionate at once. It all happens so fas you don’t know what hit you, and I think that’s kind of the point. 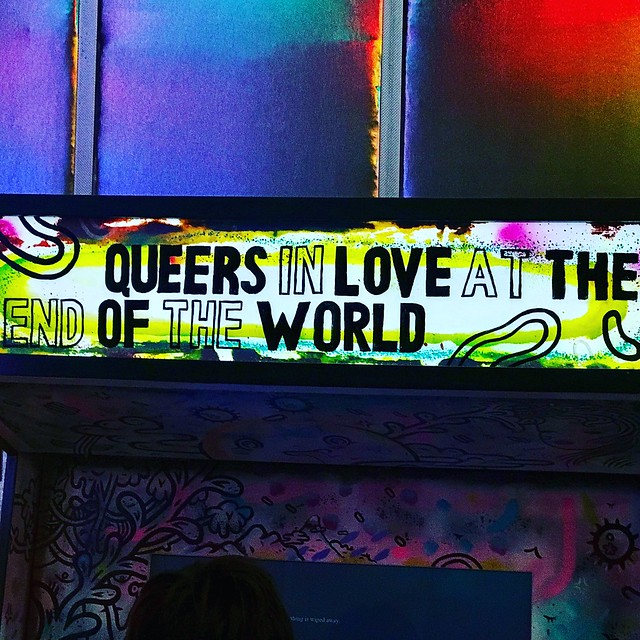 The Bush Bash is a DIY cabinet from Australia made out of half a car. The car is cut in half and you sit in the driver’s seat and shoot other cars, almost like a full scale Spy Hunter. The gear shift is the joystick and the steering wheel controls the car, while the road is projected on the wall. It is an awesome thing to behold, I want to try and make one of these. 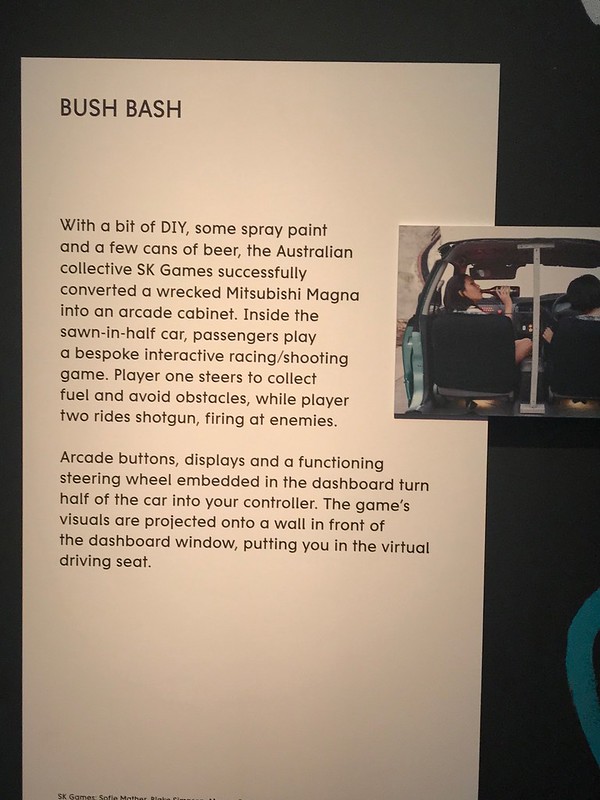 You can see Tess playing it in the videos below to get a better sense of what I am talking about:

And then there was the Line Wobbler, which blew my mind. It is essentially a full blown dungeon video game programmed on an LED strip. I was absolutely mesmerized; I could not stop looking. 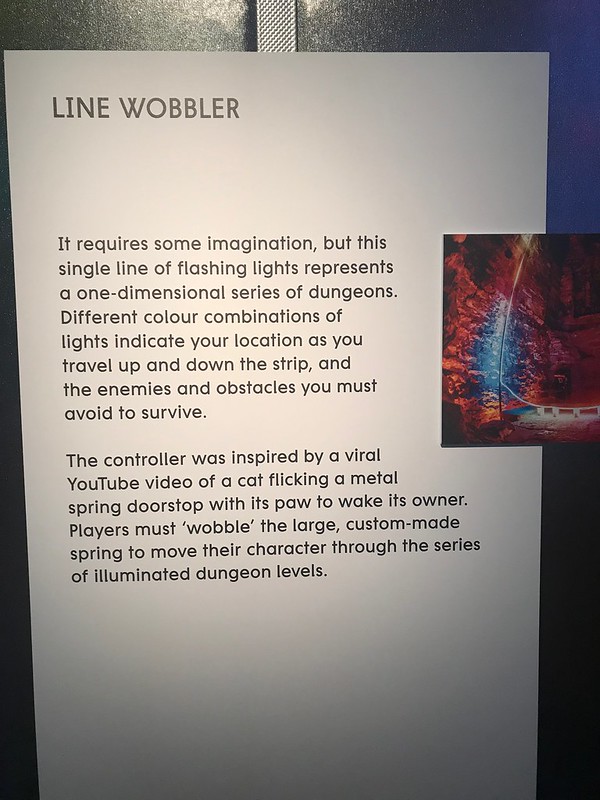 The sheer simplicity and brilliantly evocative and tangible nature of the design and execution of the Line Wobbler was so powerful for me that I could not stop thinking about it since. So much so that I decided to try and make one, and with Tim Owen’s help we did thanks to this clone (I love the internet), but that is fodder for my next post wherein I give a play-by-play for anyone wanting to give it a shot.

I came out of this exhibit wanting to turn transform Reclaim Hosting headquarters into a space to both make and play such video games (amongst other things). An excuse to return to the idea of making part of CoWork a maker space that can feed my growing DIY arcade obsession 🙂 Now to go cut a car n half and figure out how to re-create Bush Bash!

Oh yeah, and my kids had fun too 🙂

3 Responses to DIY Video Games at the V&A