“Domains in the Cloud” at Vanderbilt

The Reclaim Hosting team has our first get together since 2019 (the Domains 2019 conference) after any such travel possibilities were impossible since the pandemic. It’s been over two years since we have met up in physical space, and this time we choose to converge as a team in Music City. Reclaim is soon to be 11 people strong, 7 of which were able to make it to Nashville in person. Lauren Hanks, Pilot Irwin, and myself came in a day earlier to get a campus visit in at Vanderbilt University before the team “retreat” got going. 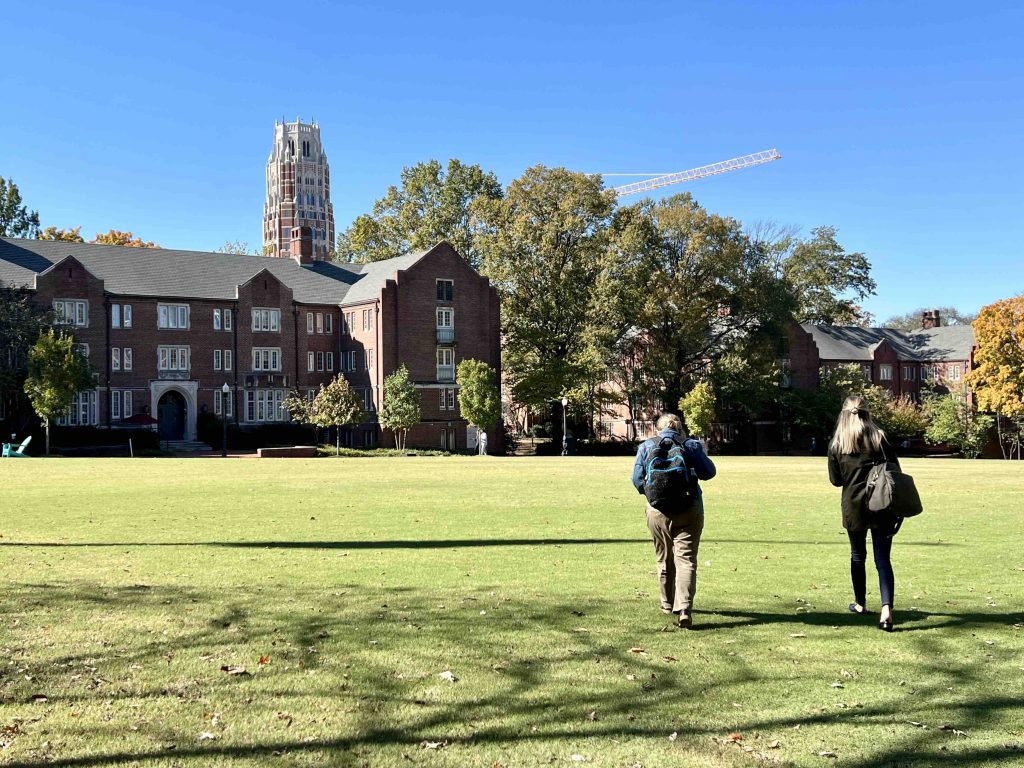 The occasion to visit Vanderbilt was fortunate happenstance given I have been in discussions with Mickey Casad, Executive Director of the Vanderbilt Center for Digital Humanities, around a project she is working on and I was wondering if it might make sense to meet up. Admittedly, part of this was selfish given Lauren and I love to visit campuses given it helps reconnect and ground the work we do at Reclaim. What’s more, I am a sucker for a beautiful campus, and Vanderbilt is just that: gorgeous quad with rarefied buildings smack down in the middle of a happening city. Not a bad re-entry into the campus visiting circuit.

The great ?@brumface? in full-swing at Vanderbilt and it tells good to be back on a campus! ?@ReclaimHosting? #rocknotrot pic.twitter.com/5mo65Y3wky

After talking with Mickey it turns out the folks at Vanderbilt were in much the same mindset, having foregone any on-campus events like this since Spring 2020, so it was a shared return, and like I imagine many post-pandemic meet-ups will be—it was both face-to-face and virtual given an entire contingent joined via Zoom. It was good to be back!

A couple of other things I relished from the visit were catching up with Derek Bruff, who now adds Assistant Provost to his list of titles at Vanderbilt. I met him last at an ALT Lab conference in 2015, so it was super cool to find him in the room, and online tweeting!

Jim Groom, channeling Tim Owens: There is no cloud, it's just someone else's computer.

Another highlight was getting to hear Lauren Hanks present about Domain of One’s Own to this group. She’s been with Reclaim for a while, and with every year takes on a bigger role in our organization and its success. An absolute honor to work beside here, and I have to say COVID-19 to not dull her presentation chops. She was as good as I have seen her yesterday, and it is really cool to see how comfortable, thoughtful, and personally-targeted her talk about the simple experience of exploring your own domain on the web. She captured brilliantly how much the magic of the web is a personal journey of intellectual discovery.

What’s more, it was cool to have one of our recent hires, Pilot Irwin (who was a Domains admin at Carleton College), on the ground taking it all in and fact-checking my ass given I am not to be trusted with acronyms and code base discussions 🙂

That’s right, the final highlight would be my taking yet another crack and trying to pull together a cogent discussions of cloud computing and the shift of computing resources to a utility model, the rise of next-generation applications beyond the LAMP stack, and the shift to container-based infrastructure that should revolutionize the idea of a sandbox for higher ed’s edtech, libraries IT, and digital humanities groups—to name just a few.

I tried to use a quick clip from Stephen Fry’s illustrated explanation of Cloud Computing from 2013, but I messed up the audio setup, my bad. That said, This is the first time I returned to this topic in earnest for a while. I first tried something like this at the University of Oklahoma in 2015, and it failed given I was getting too technical and was not entirely clear what I was arguing. I took another shot at it in 2016 with a Networked Learning virtual event, but that was not satisfying either. Since then I’ve been pretty much heads-down, full-time helping to keep the growing ship that is Reclaim Hosting floating along smoothly, making exploratory presentations less and less a focus. I do miss presenting to folks in-person, and it is the closest I will ever get to being a performer, which is something I enjoy. What’s more, using these occasions to try and connect and explain things that have eluded me for years is invaluable.

So anyway, I do thinking I was able to get some of these things across yesterday, and I actually jotted down the entire talk in text first, and then filled with images and presented on the fly. But the text as a frame to work from was really useful, so I will copy the slides and text below, and hopefully get to re-visit and refine this talk and take it on the road to start getting out in front of Reclaim Cloud—my new Reclaim love affair 🙂 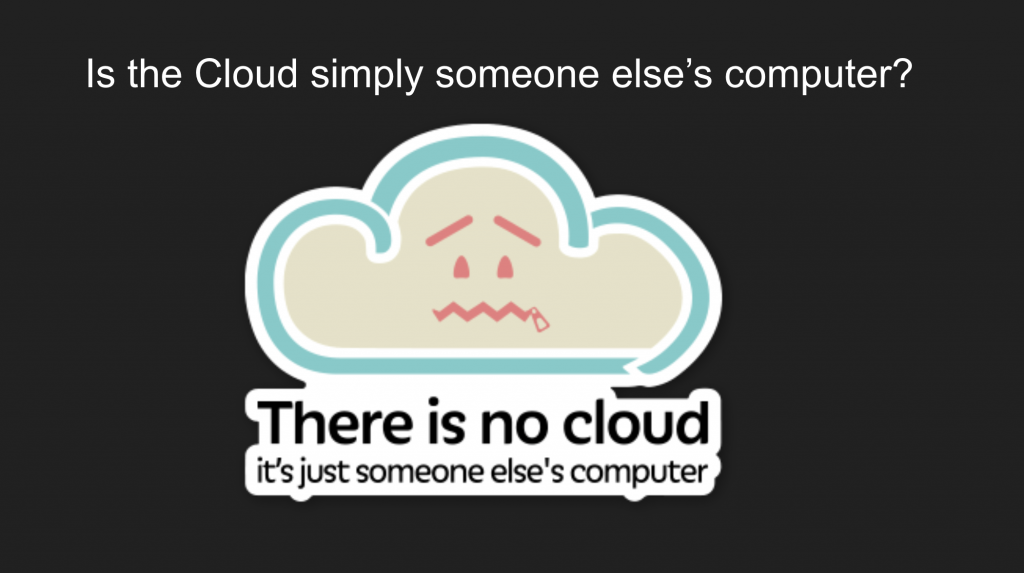 I starting by quoting Tim who often notes “There is no cloud, it’s just someone else’s computer.” While true, I think the idea here was to try and make a deeper dive to try and explain Reclaim Cloud in regards to the idea of usage-based computing, or computing as utility. So this is when I moved to the minute long clip from Stephen Fry’s Cloud Computing explanation:

From there I noted that the utility nature of cloud is no longer anything new to higher education institutions, noting that most IT organizations in higher ed are already using services like AWS, Digital Ocean, Google Cloud, and/or Azure in some fashion. In fact, the predominance of infrastructure like AWS is no longer simply rarefied IT. Noting that just recently Kathleen Fitzpatrick of MSU’s MESH are looking for an AWS administrator to run their Humanity Commons project, underscoring this is not an IT department position and is also an exploratory position for the group.

The Humanities Commons team is searching for an AWS systems administrator! This position will be joint with the @CALMSU research technology team, and will focus on designing and supporting infrastructure for a range of projects. https://t.co/oHEm6J8ceb

My assertion is that this increasingly become a norm for edtech, digital humanities and other academic computing groups around higher ed. 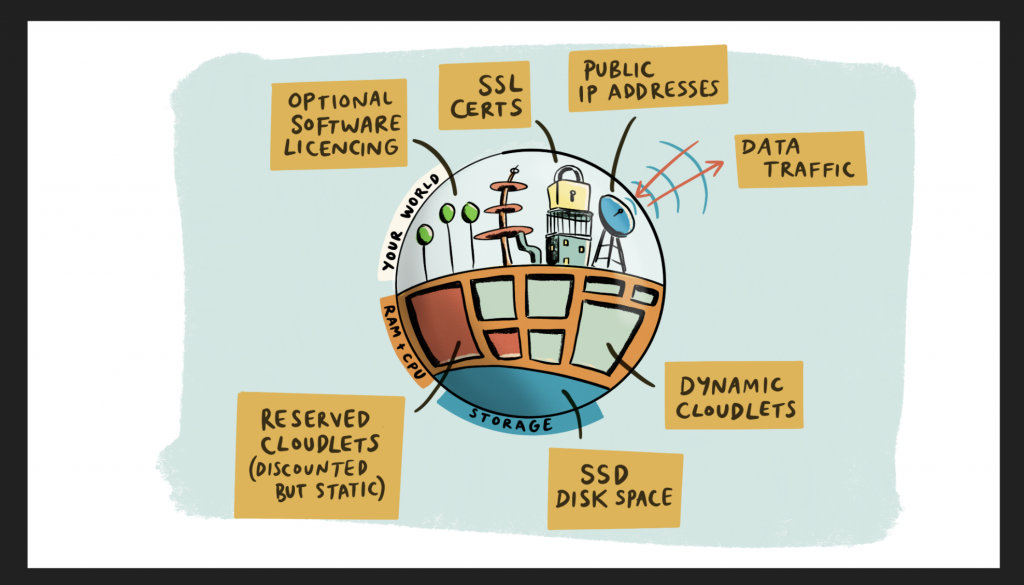 I think tried to dig in on how cloudlets and reserved computing resources work in Reclaim Cloud, but after talking with Lauren and Pilot this might have been the weakest part given I was keeping things conceptual and did not need to jump into a cloudlet explanation at this point, should maybe have waited for the demo, or not at all.

After that I asked the question “Why Reclaim Cloud?” To which I said:

Reclaim Cloud was born out of us not being able to meet the needs of our community beyond the LAMP stack, which was (and arguably still is) the most popular open source stack behind PHP applications like WordPress, MediaWiki, Drupal, Omeka, etc.

At the same time, programming languages like Node.js, Ruby, Java, Go, and many others were becoming increasingly more popular and they depend on entirely different technology stacks, making hosting applications like Jupyter, Ghost, Minecraft, Discourse, R Studio, ShinyApps, Etherpad, a hard no from Reclaim. We were cPanel shop almost exclusively, and while the power it provides is apparent, as you saw in Lauren’s presentation, the demand for applications that ran on different infrastructure was not going away.

What’s more, the cloud is not so much someone else’s computer as it is their container 🙂

The virtualization that enables containers allows for the provisioning of numerous, variegated and bespoke technology stacks almost instantly and all on the same server. The shipping container metaphor is apt, the ship (the server) carries independent, self-contained applications that all function independently within a unique tech stack-but share a common set of protocols that allows them co-exist. 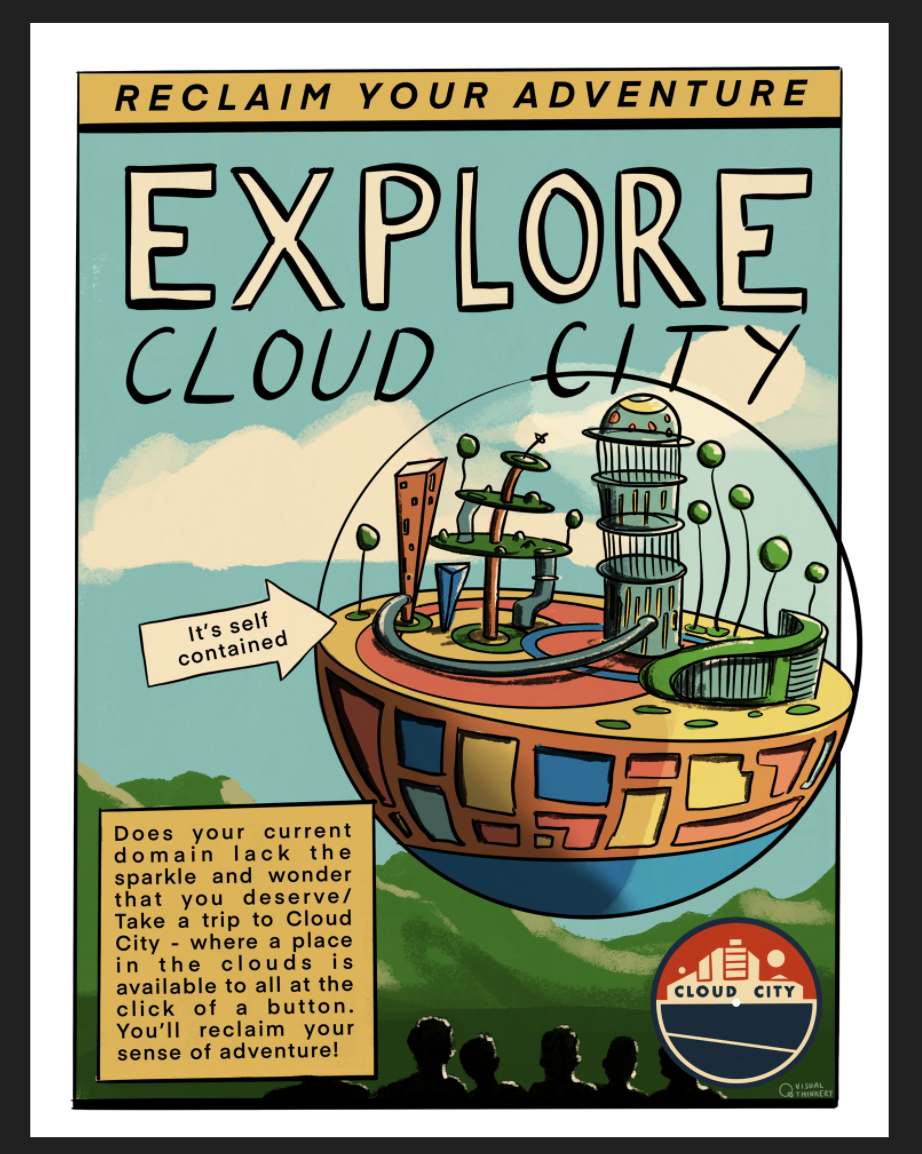 After that it was time to explore the Reclaim Cloud with a quick demo, and I show off the marketplace installers and used the Docker Hub link to find and install OwnCast on the fly, so that was awesome. Below are the points I wanted to hit, but only covered a few, but think this is a good template for any upcoming presentations cause blogging is #4life!

I also wanted to speak to how MSU uses Reclaim Cloud as a sandbox, but that did not come up until the following discussion, but here are my points there:

Look at how MSU uses Reclaim Cloud as a next-generation sandbox to explore applications they might recommend MSU’s IT department host for the broader community:

And that is a fairly solid template for future talks on Reclaim Cloud, I do think it is starting to come together, but I need to do some more research and reading to make it even tighter, but it does finally feel like progress after 6 years of trying to communicate an idea.