ds106tv: the Vertical and the Horizontal

As you might have guessed from the bava recently, there’s something in the air besides COVID-19, namely the #ds106 reunion tour 10 years on! I’m not entirely sure how or why, but I am glad it’s happening, and I am going to unapologetically ride the wave for as long as it lasts.

Taking Over the Means of Connected Production

Oddly enough, while searching for an animated GIF from The Outer Limits to capture the spirit of “the vertical and horizontal” bit I have been riffing on when discussing the awesome combination of ds106radio and ds106tv since as long ago as 2011 I found the above post from 2014. It was one of the over 3300 posts I’ve written in almost 15 years, and it is crazy to me how my own messages in a bottle on the internet float back to me at the most opportune times. It also reminds me that I don’t write like I used to, check out this bit:

But the real reason to do it [ds106] doesn’t have nearly as much to do with laying bear the materialism of the web or raging against institutional siloes [sic] or building your network—though all of those would get you a passing grade on the test. The real reason is there’s possibility of magic in such an approach. There’s a point where the time, energy, and faith in a seed of networked learning could transform into an experience of taking over the means of cultural production for even a moment—creating a networked space where you’re course transforms into a community of people become producers, distributors, and consumers simulataneosuly [sic]. The vertical and the horizontal. That’s become the high watermark of online, open, connected learning for me, and my paltry contribution to Connected Courses is trying to share and model how a group of us built the infrastrcuture [sic], communtiy [sic], and ethos around ds106.

That’s pretty damn awesome, typos and all. And while I don’t have any recollection of writing it, it was just the message in a bottle to the internet that I needed to float ashore these days. It’s perfect timing.

I think the culture that emerged from #ds106 remains the high watermark for open online learning, at least for me (though I’m obviously biased), but I wonder if some others out there agreed with their feet. Is that why they’ve come back for more and brought some new folks along with them? I’m not sure, but I still believe in that possibility of magic to transform learning, and the toolbox we have been given to fashion it on the web seemingly knows no bounds, which is the perfect transition to ds106.tv.

In addition to the 25 vinylcasts on the ds106radio I have done over the last 40 days or so, I’ve also been experimenting with broadcasting to a live video stream that Tim setup to revive the idea of ds106tv. In the above video I am talking through how I was able to pull in my Atari 2600 Flashback to OBS using the RCA-input Elgato Video Capture card. The following Youtube video helped me figure this out:

I also talked a bit about how I was able to add a virtual audio device in Loopback to OBS, which was as simple as adding a new audio input device. After that I played the 1982 Atari 2600 game Haunted House for the remaining 10 minutes 🙂

But all of this to say I have been deep in the weeds of ds106tv and it feels good. I was originally play with Streamlabs OBS, which is a fully featured fork of the open source OBS software geared towards gamers. In fact, Tim did a walk-though video of the software that was really useful for me to get up and running, and luckily OBS and Streamlabs OBS are almost identical:

The video is 55 minutes long, and if you have the patience it gives you everything you need to get up and running with OBS, whats more there are more details around using ds106tv specifically here: https://ds106.tv/howto/

I spent some time over the last week moving from Streamlabs OBS to OBS because I was finding Streamlabs was harder on my computer, it was demanding more CPU than my 2015 Macbook Pro wanted to give and once I did the resource issues have gone away.

Below are a few screenshots I took of my OBS setup, you notice this is the Living Room scene that includes my laptop webcam, a ds106tv text-based logo, and a background image of the UMW Console Living. 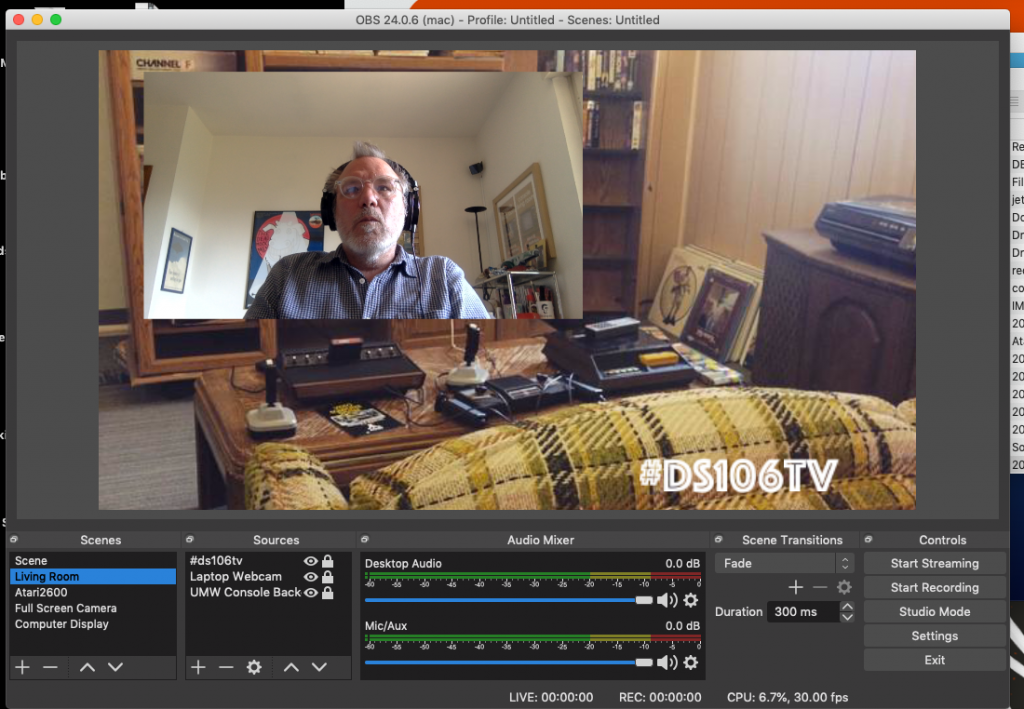 The next scene is the Atari 2600, wherein I bring in the ds106tv text, my webcam, and also a window with the elgato video capture card. 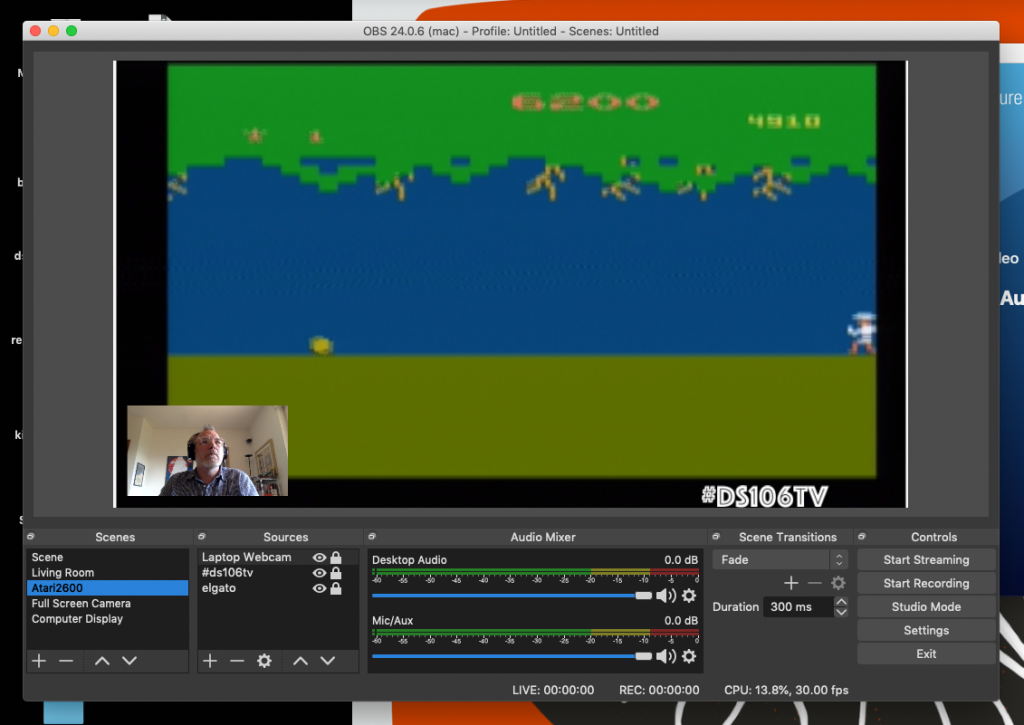 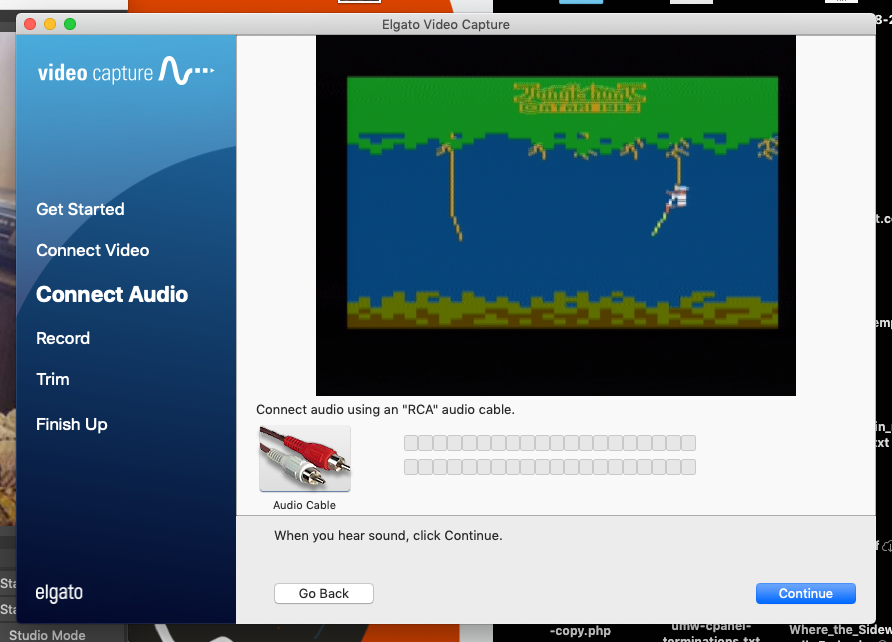 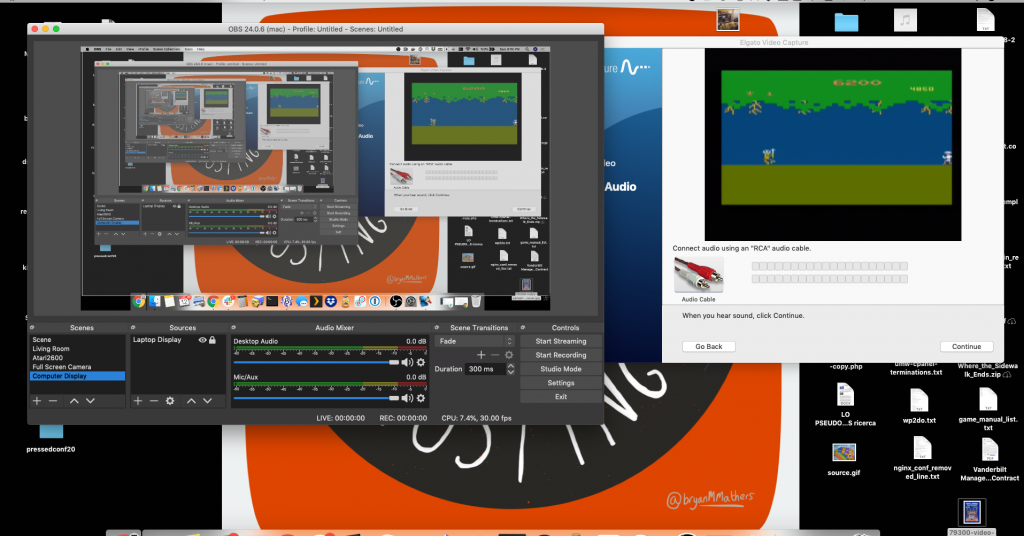 The problem with the video capture card window was that capturing video through a window is sketchy at best. Frames skip and the live stream looks terrible. I figured this out after testing with Tim, and that’s why I’m now pulling in the Atari 2600 games using the Full Display input for a second monitor that is running the Elgato Video Capture application full screen. There is some tweaking you need to do around display resolution if you are capturing low-resolution content like I am, but I think the next test will be to run a VHS tape through this device and see how that looks through ds106tv. 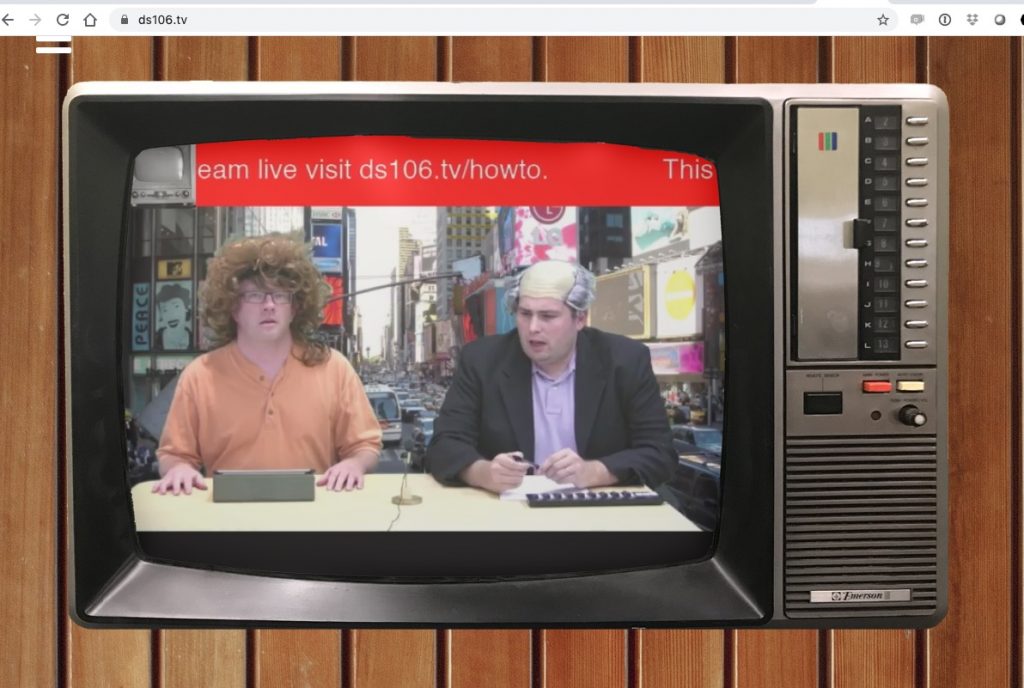 But that is just the tip of the iceburg, Tim has been experimenting wildly and right now we are capturing an archive of all live streams as well as building randomly automated loops of shows so the TV is never static. It’s crazy, just the other day I was taken back to 2012 or 2013 when Tina and Timmy were broadcasting from New York City’s Times Square in search of their big toe! 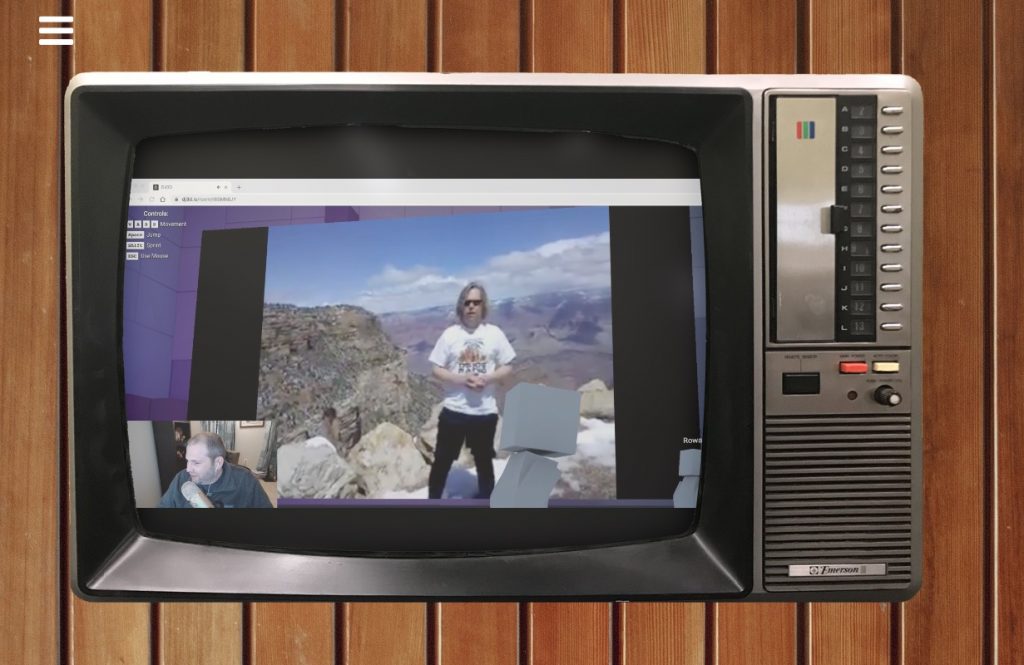 And then Tim was using Dj3D which let’s you DJ Youtube videos on the fly, and folks can join you in what is akin to virtual movie theater filled with Minecraft-esque avatars. You can get a bit of a sense of this from the screenshot above featuring Todd Conaway at the Grand Canyon in 2011 during the first wave of ds106tv. 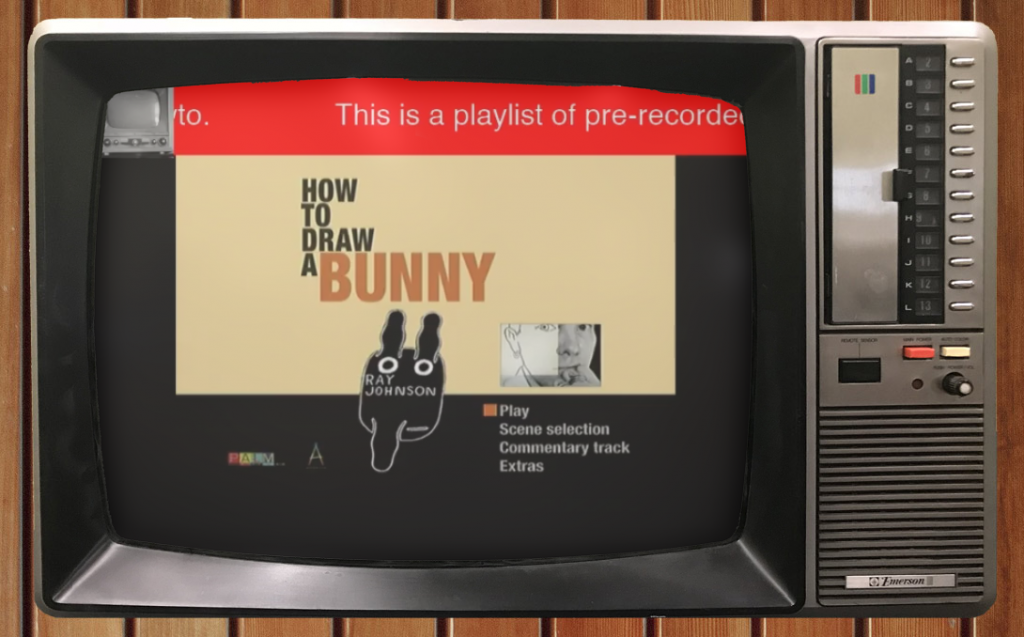 But crazier then that was once the shenanigans of Tim’s live stream were over I was kicked out to ds106tv to discover a documentary video playing about the life of collage artist Ray Johnson called How to Draw a Bunny and it was absolutely amazing. Turns out that documentary had been live streamed previously and was now part of the random playlist that you might find when you go to ds106tv. Amazing, I spent the next 90 minutes glued to the screen. It’s that magic of the unexpected that is what so many of us love most about the web in action. I know there is much more to come on the TV front, and it is cool to see the playground of Reclaim Video’s stream be so quickly grafted on top of ds106.tv. It always seems that the playing is never in vain, and while the ideas we come up with seem crazy at the time, in retrospect it seems like we have always been paving the way for a return to that thing which brought us together and made us happy.

This entry was posted in digital storytelling, ds106tv and tagged ds106, ds106tv. Bookmark the permalink.