A site that I have been working on with professor Marie McAllister in the English, Linguistics, and Speech department here at UMW has me extremely excited these days. And I decided to blog it early so that my co-workers don’t have to suffer through me talking about it ad nauseum. The site is still very much a work-in-progress and Marie will introduce it to her students next semester and the real work will start then, but I just wanted to talk a bit about how she imagined the site and how we then built it out on UMW Blogs. I think we have the rudimentary beginnings of the closest thing to a WordPress social site (no real trace of a blog) that I have yet to help create: Eighteenth-Century Audio. 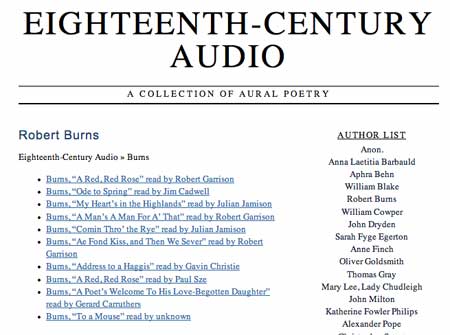 Marie and I have been talking about this project for a few months informally, but it wasn’t until early this semester that we sat down for an hour or so and went through the specifics of how she conceptualized the project and what specifically she wanted it to do. Marie specializes in 18th and 19th century British literature and one of her concerns as a professor (please correct me if I am wrong Marie) is the dislocation between the students analysis of the poems of the eighteenth century when simply read silently on the printed page versus an actual reading that exemplifies and models the means through which any given poet of that time is exploring issues of meaning through pronunciation, meter, rhythm, rhyme, etc. The idea was to create a resource that featured a variety of poems from the eighteenth century read in a manner that would give a more compelling sense of some of these poetic elements that may get overlooked when silently read rather than actively listened to.

But these audio poems are not being thought of as static resources in a repository that Marie and i would have to upload. Rather they would come from a variety of different sources already available online in the public domain (through sites like Librivox) that could be brought seamlessly into this site. Additionally, students would have to listen, examine, and rate these various readings. This interactive element of rating the readings would allow poems that are considered superior by users to be featured prominently on the homepage in the sidebar.

The other issues were usability, a space for discussion, an easy way to browse the different poems, and a mechanism whereby students could submit there own readings of poems to the site easily. This was beginning to sound a lot more like a social site than a blog and I started to feel WordPress slipping away from me, and I was scared 🙂 Luckily I read numerous edubloggers often, and this post on Bionic Teaching featuring some excellent WordPress tutorials also linked out to this project which helped me imagine how we might approach the Eighteenth-Century Audio site. Never underestimate the power of a distributed network and special thanks go to Tom Woodward for sharing his very cool work. Tom talks about the elements used to create the Byrd Book project in this video tutorial, and I’ll briefly detail a similar process I used in WPMu below.

Creating Eighteenth-Century Audio was in many ways a conceptual rather than a programming issue (particularly because I am not a programmer!). The biggest obstacle with WordPress when creating a site rather than a blog is page navigation. WordPress has no sophisticated mechanism for dealing with navigating between posts and pages, or even pages and pages, making this site in many ways a custom job that, once hacked, makes the actual posting of audio simple.

So what was the hack, it is more like a plguin cheat that I think I will be using again very soon. Here’s how we did it.

There will be no blog!: Imagining WordPress without a blog
This site has no centralized blog that collects posts, rather there are a series of author pages that aggregate the posts that have audio of that particular author using the category RSS feeds in WordPress. For example, the Robert Burns page is effectively empty, there is no text in it at all. Yet if you go to it you’ll see there is a list of links to various posts that contain audio, a rating bar, and space for comments. How did we do this voodoo, you ask? Simple, we made sure that every post that had a Robert Burns audio file was placed in the category titled “burns” (no quotes). We then used the aggr plugin (a fork of the aggregate plugin) to pull the RSS feed containing all the posts in the category “burns” into this page. This was accomplished with one simple line of code:

And that’s it. For every new author page Marie created, she just took that little piece of code, placed it in the code editor for the new page and changed the category to match the appropriate author. For example, a page with links to Jonathan Swift’s audio poems would have this in the code editor…

The genius of this is once you create an author page you don;t ever have to update it again, it is all done through posts and categories making an a new entry to an existing author page a one step process.

After that, everything else is a layup:

Post-Ratings
The ratings are based on Lester Chan’s plugin Post-Ratings (along with the sidebar widget), which is easily integrated into the post template with a quick theme hack accomplished quite easily on WPMu using the capabilities of Userthemes 1.1. The benefit of Userthemes is that once copy to her own directory this is a theme that she can change accordingly and will be the only person with access to it, so that any hacks don’t impact the system theme for all users.

Anarchy Media Player
The actual audio player is the Anarchy Media Player for WPMu which takes any url of any mp3 file openly available online and embeds it a post so that users can access the audio right from the site 9while at the same time including a link to the audio source). This is the real coup in my opinion, for we don;t have to waste time downloading, organizing, and re-uploading audio, we are essentially using this blog to organize audio already online in manner useful for a particular course dealing with a specific set of authors.

However, we still have one larger challenge: allowing any user to sign-up and add an audio file. The adding of audio for pre-existing pages will be easy for UMW students because they can sign-up for a username and add themselves as authors to the sidebar using the Sidebar User Registration plugin for WPMu. Yet, the challenge of how to let users outside of this UMW Blogs community also become authors and upload audio remains tricky with WPMu. I am always up for good suggestions or tips, but for now we have a very basic, but highly functional social site that will allow the professor, class members, and anyone in the UMW community to post an audio file featuring a reading of eighteenth-century poetry to this site. Groovy, no?