Screenshot from the screwball comedy His Girl Friday,
a film which is freely available though the Internet Archive

I watched His Girl Friday for the first time this evening and it was quite impressive -I am still recovering from the barrage of piercing dialogue shot at me, as if with a machine gun, for over an hour. Much to my surprise, the film is much darker and political than most screwball comedies I have seen. But I am not posting a review of this movie, but rather to direct you to the unbelievable film resource that is the Internet Archive.

After finishing this film I wanted to find out what the idiomatic expression “His Girl Friday” means, or meant. I had heard a few people use it in my childhood, and when my wife asked me if I could explain its meaning – I froze. Such a moment is not easy for one who takes great pride in being well-versed in all things slang. So, in a state of resignation, I turned to the internet but alas with no luck (so another alternative is Gardner, for some reason I think he’ll know this). However, all is not lost for I did serendipitously stumble upon a far greater prize that the signification of an idiomatic expressions from the 40s: the public domain film collection of the Internet Archive.

Recently I published some thoughts on horror movies, wherein I noted that The Night of the Living Dead is in the public domain and freely available through the Internet Archive to anyone with an internet connection. During my stunted search for slang this evening, I realized that there are many, many more great films made available by the Internet Archive -it is truly the site that just keeps on giving!

The site provides smaller versions of these films that are a quick download (and readily compatible with a video iPod as mp4s which I am well aware is sacrilege for many purists) as well as larger, higher-resolution versions (around 3-4 gigs). And while the transfer quality on the larger versions may not match that of a digitally mastered DVD, there are some useful tools that would allow you to quickly and easily edit and compile clips from these movies for entertainment, intellectual, instructional, and/or creative (i.e.mash-ups) purposes. And all this joy is made available to us (the John & Jane Q. Publics of the world) gratis.

I have listed some highlights from the collection below (interesting that one could take a trip through the cinema of German Expressionism without ever using Netflix!): 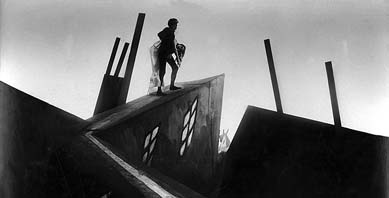 Screenshot from The Cabinet of Dr Caligari a tour de force of German
Expressionism that has the craziest filmsets you’ll ever see!
This entry was posted in Uncategorized and tagged Movie Lists. Bookmark the permalink.