Filmfax, my connection to another world

As much as I love the internet, I have to be frank, it has never really come close to the magic that is reading the b-movie rag that is Filmfax. I may be wrong here (but I’m not), there is really no comparing the articles, black and white images, and endless ads (that are often as enjoyable as the articles themselves) in Filmfax with the b-movie blogs and websites I have come across on the internet.

This may seem counter-intuitive, or just plain nostalgic (guilty as charged), given that on the internet you can embed clips from YouTube, emblazon your posts with screen shots in technicolor, or even link to a million and one resources on any given movie or personality. But for me all the internet’s power pales in comparison when it comes to a well imagined and executed issue of Filmfax, just like the most recent one I received in the mail.

The cover image says it all… 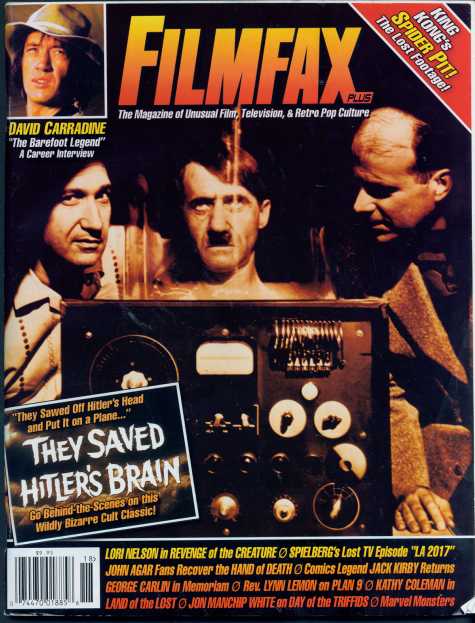 For a while now I have had two dreams: the first is to have my own movie rental store that kicks ass and brings back the old gold of the early 80s movie stores, and the second was to create a space online that is as thoughtful and engaging around movies, tv, and retro-culture as Filmfax. But I get the feeling sometimes that neither may be possible any more. I mean look at that issue of Filmfax above, it has a four page article about They Saved Hitler’s Brain, which is based on a 60s low-budget film that was re-edited with footage added in the early 70s when it was released on television. Add to that another article that catches up with Holly Marshall (Kathleen Coleman in real life), the young girl from the 1970s TV series Land of the Lost. Which brings back some amazing memories of sitting in front of the television at 4 pm on school days waiting for the Sleestaks to emerge from the depths of the endless caves, creatures who were simultaneously cheesy and deeply creepy. And where else can you get a page full of Italian Sword & Sandal b-movies? How do you compete with this kind of genius? So, just like last year, this year I have one, and only one, thing on my list for my birthday: a year long subscription to Filmfax. It’s gonna be another good year!

This entry was posted in Uncategorized and tagged b-movies, film, filmfax, movie, television, They Saved Hitler's Brain. Bookmark the permalink.

1 Response to Filmfax, my connection to another world