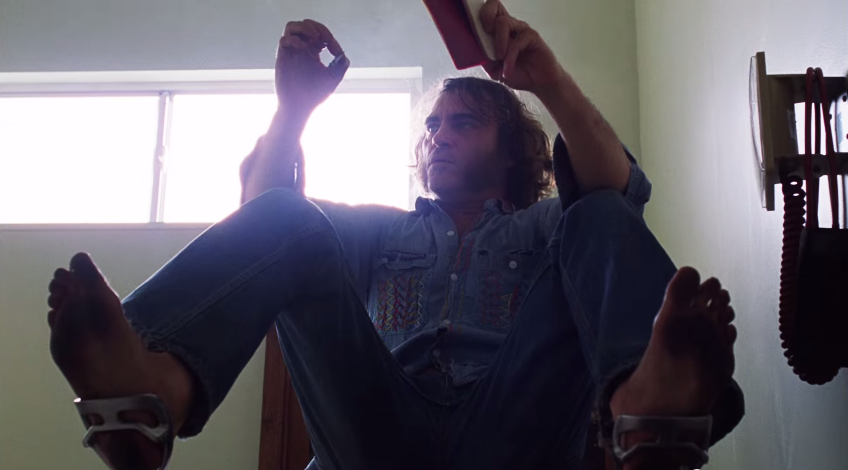 I saw Paul Thomas Anderson’s Inherent Vice (2014) last night. I enjoyed it. I just ordered Thomas Pynchon’s novel it was based on because I’m interested in how he adapted the original. I haven’t really been interested in Pynchon since undergrad. The Crying of Lot 49 is said to be one of his more accessible works, and it turned me off (not enough car chases and explosions 🙂 ). So the idea of struggling through works like Vineland,  V., and Gravity’s Rainbow back in the 1990s wasn’t all that interesting to me. What’s more, I’ve been pretty tepid on Anderson’s work as well. I enjoyed Boogie Nights (1997) enough, but had no particular love for Magnolia (1999), hated Punch-Drunk Love (2002), couldn’t finish There Will Be Blood (2007) and found The Master (2012) moderately interesting, if a bit long and lacking tempo (something a number of his films suffer from in my opinion, including Inherent Vice).

But I come to Inherent Vice in a historical desert of good U.S. films, so I’m probably more forgiving than ever before. But beyond that, I’m co-teaching a noir-themed version of #ds106 this semester, so my interest in all kinds of noir is at a peak. And that’s part of what I liked about Inherent Vice, it was playing with all kinds of noir—drawing on neo-noirs like Robert Altman’s The Long Goodbye (1973), Roman Polanksi’s Chinatown and the Coen Brothers‘ The Big Lebowski (1997) as the canonical foundation of the genre, much more so than iconic classics like Double Indemnity (1944) and The Maltese Falcon (1941).

Does this make Inherent Vice somehow a neo-neo noir? You can see Larry “Doc” Sportello (Joaquin Phoenix) overtly channeling Jeff Bridges’ brilliant performance as the not-as-dirty hippie “The Dude” in The Big Lebowski. Sportello travels the same rehabs and 1970s L.A. haunts as Elliot Gould’s Marlowe in The Long Goodbye. He also investigates shady real estate deals, shadowy drug cartels, and the vertical integration of consumer dependence upon the monied elite, reminiscent of the untouchable corruption  Jack Nicholson’s J.J. Gittes comes up against in Chinatown.

It doesn’t seem like you really need to go back to the older noir 40s and 50s noir. The focus of Anderson’s film—and I’m guessing Pynchon’s novel—on more recent noir suggests a kind of historical repositioning of the film genre. Paul Schrader’s “Notes on Noir” argues style is a more accurate definition of noir than genre, but in Inherent Vice the story is a historical container of the genre more broadly—working through so many of the tropes from which it derives meaning. It seems much more than a style in this regard. As Scott Leslie notes on Twitter earlier today:

@jimgroom yeah felt bad for people going to see it without a lot of background context, either film, literary or historical. Really needs it

Inherent Vice provide an excellent reminder of just how much all narratives are intertextual, and constantly alluding, citing, and responding to one another. In many ways noir is a form of cultural literacy, and to understand noir over the last 90 years, is to learn about U.S. culture from within and without—it’s no coincidence the genre was most clearly articulated by a bunch of French cinephiles.

During the Depression in the U.S., a kind of cosmic fatalism seemed to have worked its way into the literature and film. You can see this in James M. Caine’s 1934 novella The Postman Always Rings Twice (which we’re reading this week in #noir106), as well as Billy Wilder’s Double Indemnity (1944), based on another of Caine’s classic noir novellas. Interestingly enough, Wilder was an Austrian Jew who emigrated to France and then the U.S. during the 1930s as Hitler came to power. His mother, grandmother, and step-father all died in the Holocaust. James Naremore, in his book More than Night, argues the “discovery” of film noir in post-war Paris is no coincidence. It was a city engulfed by the horror of World War II—a kind of existential ground-zero for Western Civilization. And many of the European emigres were the visionaries behind these Hollywood stories. From the very beginning noir was geopolitical.

That omnipresent fatalism in film noir turns its eye on new horrors in the later noir. Chinatown takes aim at power and capital,  the 1930s water scandal it unearths provides an analog for the more contemporary corruption of Watergate and the Vietnam War. And by the time we get to the 1990s, the Iraq war is a media event, one which shapes how Lebowski understands his own world. He echoes Bush’s “this aggression will not stand”—which he watches while buying milk at Ralph’s grocery store—when he draws a line in the sand with the carpet pissers. The whole of Western Civilizations’ geo-political struggles (which we are still very much in the clutches of currently) are reduced to the lazy, ironic hero Jeff Lebowski who is truly “the man for his time and place.”

And this idea of a particular time and place through which noir continues to frame both the specificity of a moment, as well as the broader existential questions concerning our relationship to truth, power, and meaning is why I love it. This is why noir has increasingly become the preeminent genre for storytelling over the last eighty years. When it comes to dealing with the dark uncertainties where individuals and society interface, few genres  do it better—as much as we love zombie films, they pale by comparison. In this regard Scott Leslie is right on, it takes some context to make sense of all this. Making noir the perfect frame for a #ds106 class. Why? Because #ds106 can’t simply be about learning particular technologies without a context, it must be about the context of technology in a particular time and place. In fact, technology is one of our darkest uncertainties as a culture right now: paranoia, surveillance, control, unilateral power, eroding rights, monied elite—need I go on? And originally I wanted this version of #ds106 to be about technoir, but that’s not enough. The net needs to be cast wider for the true creative capacity of a genre like noir to make sense.

Noir represents the spaces where individual agents (private investigators, detectives, and insurance agents) become at once representative of and estranged from institutional power over individual fate. By the time we get to Inherent Vice there seem to be no illusions that institutional corruption can be curbed. In fact, the LAPD detective, Big Foot (played brilliantly by Josh Brolin),  has become paralyzed by the corruption of the institutional structure he works within. Whereas noir detectives and PIs were traditionally the human face of, and moral compass of institutions—in Inherent Vice they’ve become caricatures—militarized and extreme—with none of the complexity of James Ellroy’s boys in blue.

It’s as if the advice given to J.J. Gittes at the end of Chinatown has become noir gospel, “Forget it Jack, it’s Chinatown,” there’s not a damned thing you can do about it. But, in Inherent Vice, maybe you can do one small thing. Like salvage a relationship; rekindle a love affair. Sow some unassuming seeds of hope and compassion in a world gone awry. As noir it’s extremely modest in its aspirations—and that’s a sign of our times when it comes to power, money, and the like. We live in times where we waged global war for oil, we know the NSA is spying on us, we know the distribution of wealth is unjust, we known our politicians are lying to us. We know all this, and we don’t seem particularly concerned. It’s a distressing time for just that. And Inherent Vice provides no solutions. In fact, now that I think about it, it returns us to some of the more fatalistic noir of the 1930s and 40s. This is nowhere more apparent the when Sauncho Smilax (Benicio Del Toro) defines the title of the film in legal terms. Inherent vice is…

the tendency in physical objects to deteriorate because of the fundamental instability of the components of which they are made, as opposed to deterioration caused by external forces. All objects have some kind of inherent vice as a result of the baseline law of entropy.

So rather than a looking out to struggle with the external forces which characterize noirs like Chinatown, The Long Goodbye, and The Big Lebowski, this film is a turning inwards. A solipsism that obsessed with the fragile, unstable things we all are within this fatalistic cosmos of deep uncertainty. I guess this would explain all the gym subscriptions, yoga pants, and zealous faith. At the same time, in the face of the instability of the cosmos one small thing is accomplished by filthy-footed protagonist. A family is saved. A relationship is tenuous, but possible. In many ways it’s a film that embraces the macro-fatalism of noir and challenges it with a few moments of micro-hope 🙂 By no means a great noir, but when taken within the broader context of the genre it gives you some things to consider. Noir, it’s #4life