I have been meaning to write about just how easy it was to include the eight Flickr images I used for the In Jim’s Chair post. Tan Tan Noodles’ Flickr Photo Gallery plugin for WordPress (and WPMu) is often associated with the awesome Photo Gallery it can integrate into your WordPress site, see an example of this here.

But another sick feature of this plugin that I rarely use, but now know I should, is the seamless integration it offers for bringing both your own images on Flickr, as well as everyone else’s, easily into your blog posts. In order to get the eight images tagged with “jimschair” on the UMW DTLT Flickr site into said post, I simply added the tag “jimschair” and clicked on the everyone’s photo radio button, viola, below are the results and placing them in the post is as easy as a click, which gives you all the size options you could ever want. 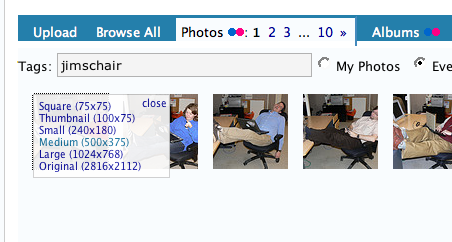 Andy Rush has a nice tutorial that takes you through the features of this plugin in less than three minutes, because he’s a professional.

Now, add to this the slick, Creative Commons friendly plugin PhotoDropper that CogDog blogged about a little while ago, and you have a pretty compelling argument for recommending Flickr and WordPress as small pieces not too loosely joined.