Trying to play a bit of catch-up on my bavacade given I have made some significant strides towards getting fully operational. One of the recent highlights was finally getting the Gyruss multigame mod-kit installed so that it can also allow you to play Time Pilot and Pooyan. This mod-kit was by far the most complex yet with the need to desolder 5 chips and install as many daughter boards, and that was just on the main board. There is an additional daughter board for the auxiliary/sound board as well, bringing the gran total to 6 additional boards on the boards.

Here is a look at the Gyruss boards before the mod-kit was installed: 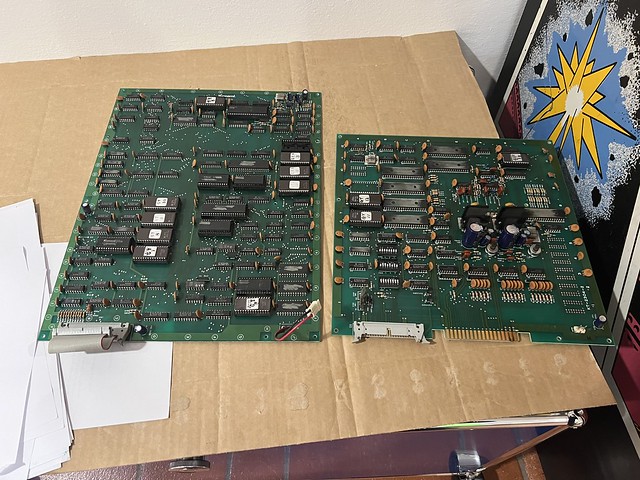 And here is an image after the installation: 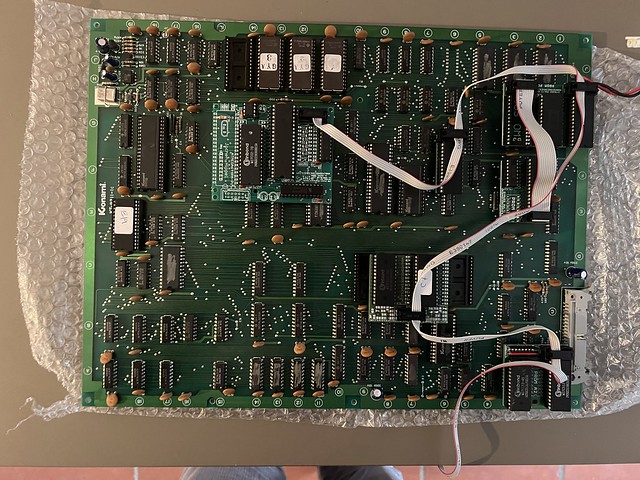 The A6/A7 daughter board in the image above (you can identify it by the white stick with writing) has a socket for connecting to the main board, which gives you a sense of the Frankenstein creation of the whole thing 🙂 If you want more details images of the game board chips there is a Flickr album here. 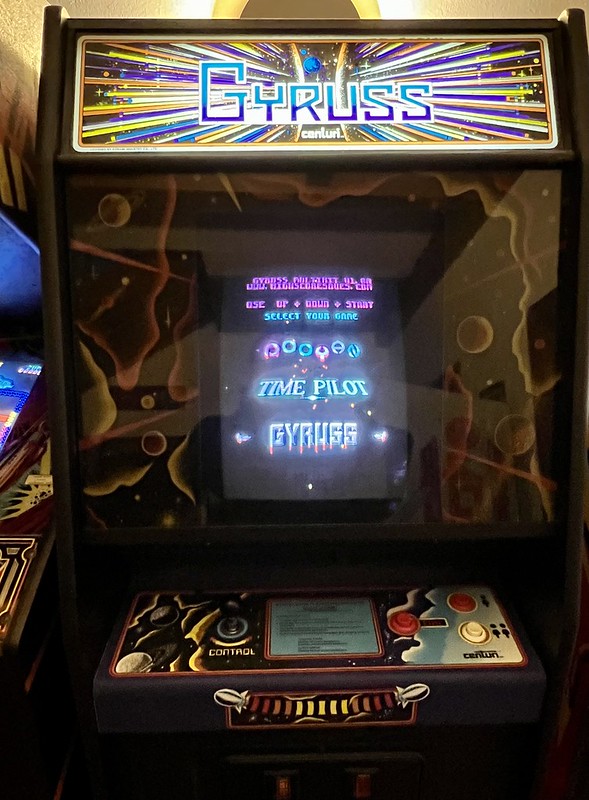 I love having Pooyan and Time Pilot easily accessible on Gyruss by simply pressing down the player 1 button for 5 seconds and being brought to the selector screen to choose my game of choice.  I particularly love Pooyan, so that is a total treat for me—it’s the three little pigs fairy tale come to video games: 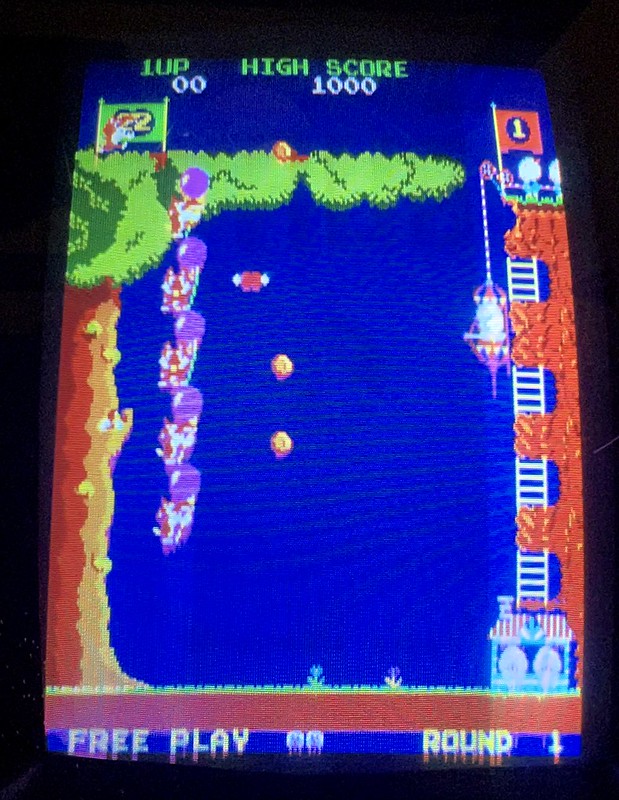 Although one thing you might notice here, and also on the Time Pilot screen below is that there is a bit of bleeding in the graphics under Free Play, Round One, and the momma pig’s elevator. 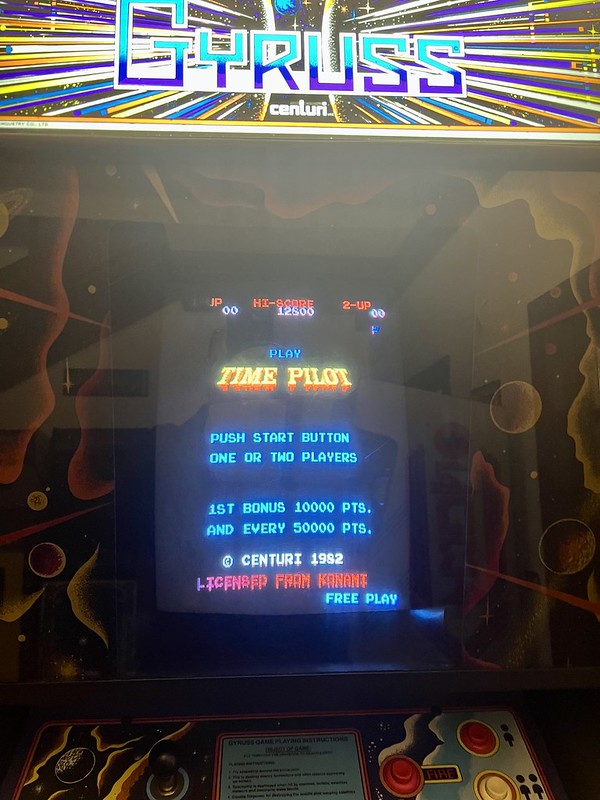 You can see the bleeding pretty starkly against the black background of Time Pilot’s opening screen, particularly underneath the red “LICENSED FROM KONAMI.” Not a deal breaker per se, but I would like to know if that is an issue with the mod-kit, or something else. The strange bit is Gyruss shows no signs of that bleeding, so I am thinking—perhaps mistakenly—it’s the mod kit. 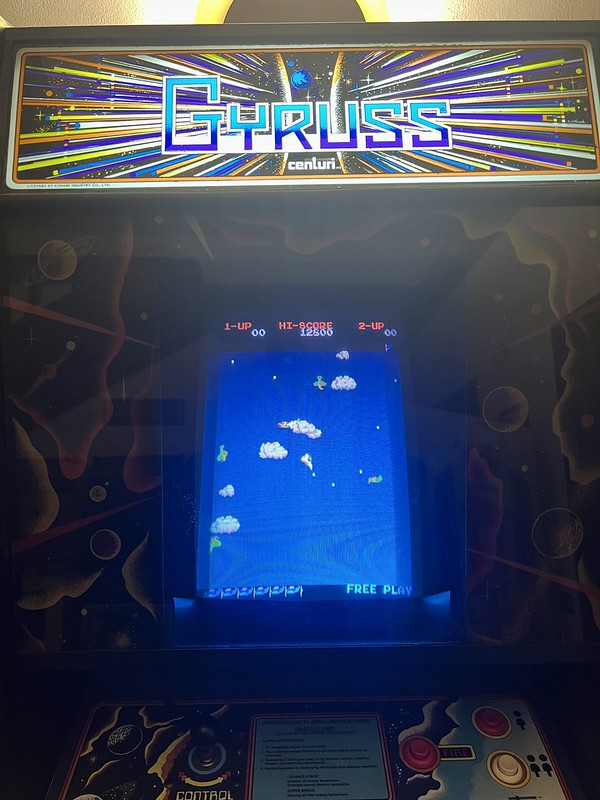 That said, the actual game play of Time Pilot shows no bleeding at all, so it is bizarre. 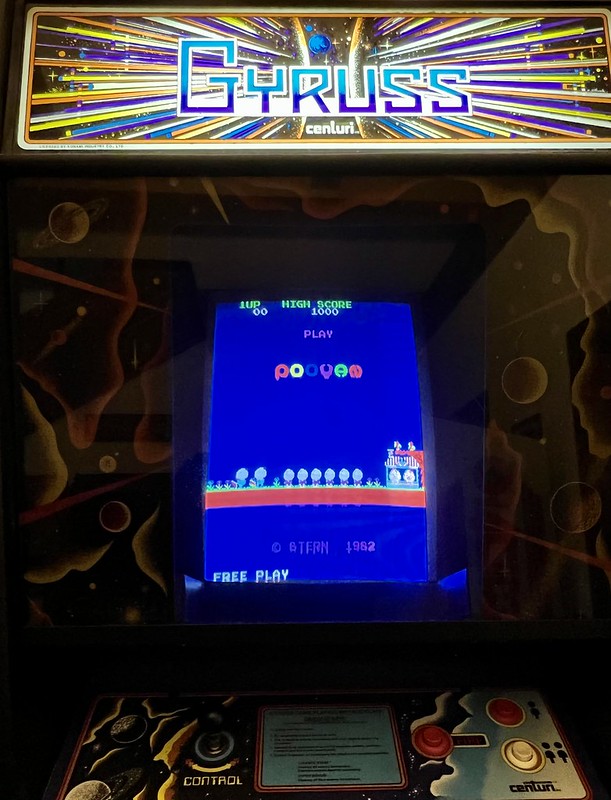 One of the things I learned after trying to desolder and socket chips on the Stargate board which resulted in breaking a trace was that using a desoldering gun on these boards may not be the best approach for a newbie like me. I gave this board to Roberto, a local game repair guru, and he desoldered the five chips and added sockets for me. He recommended as much after seeing my early attempts on the A2 chip on this board, but luckily I knew I was heading into troubled waters and swam back to shore immediately. I guess desoldering a pristine board like this Gyruss with hot air rather than a gun that touches the board is both a cleaner and safer way to go. 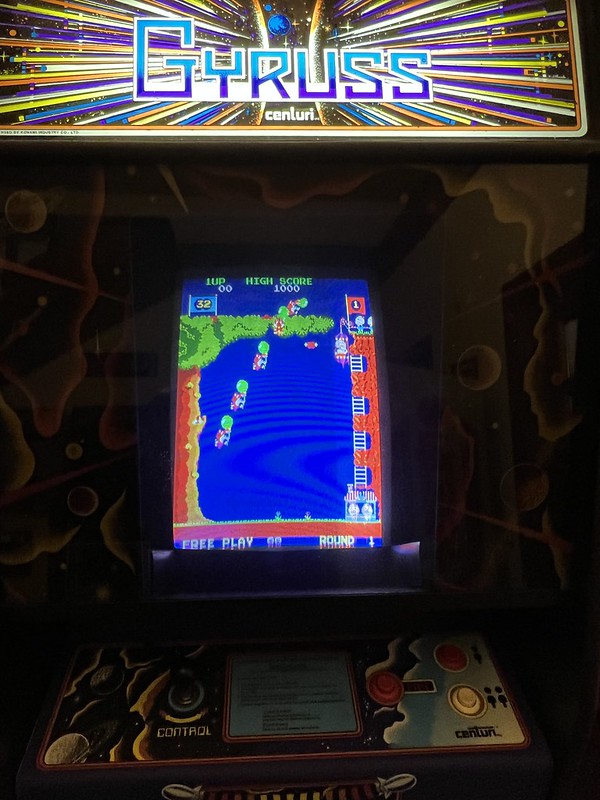 This was the last of the multigame mod-kits I had to install in the cabinets I have here in Italy. And it feels good to have gotten that done because as of today I officially have 14 more games on the way to the bavacade, and I have a few mod-kits on-hand to install on those games when they arrive, most excitedly Pac-man and Elevator Action! What’s more, I have to figure out where I’m going to put the 30+ games I have amassed!

This entry was posted in bavacade and tagged bavacade, gyruss, Pooyan, Time Pilot. Bookmark the permalink.