How the Web was Ghettoized for Teaching and Learning in Higher Ed?

The above title was something I tweeted out last night when I finsihed the presentation I delivered yesterday at the Digital Media Learning 2014 conference.

Maybe title of 15 minute presentation tomorrow should be “How did the Web become Ghettoized for Teaching & Learning in Higher Ed?” #DML2014

I’ve been working on a broader narrative for contextualizing the work we’re doing at University of Mary Washington with Domain of One’s Own. This initiative offers students and faculty a domain and web hosting so that they can more deeply inhabit and interrogate the web. For some, it’s most easily explained as an eportfolio, but for me that explanation is far too short-sighted. What’s more, it ignores higher education’s ongoing over-dependence on learning management systems (or siloed teaching and learning) for well over a decade.

Martha Burtis has been on a blog tear as of late framing our expeirence with Domain of One’s Own six months on, how we are building out community through community.umwdomains.com, as well as how faculty and students are using UMW Domains. I recommend reading Martha’s trifecta of awesome posts for a detailed account of where we are with Domains of One’s Own to date. 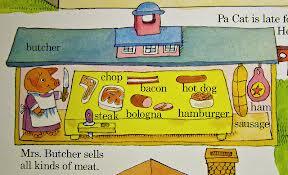 In terms of the DML presentation, after briefly explaining Domain of One’s Own and blowing the audience’s collective mind 🙂 with the greatest Richard Scarry cannibalistic pig analogy ever used for explaining how domains/web hosting work based on this post (which accounts for the first 14 slides) I moved into the core of the presentation, at least for me,  “A Brief and Incomplete History of Personal Web Spaces” starting at slide fifteen (see slide deck at bottom of post).

I’ve talked about tilde spaces (~/spaces) in relationship to Domain of One’s Own in a cursory manner before, and the idea of tilde spaces as a precursor to UMW Domains is something I’ve continued to return to in my mind. In an attempt to more concretely frame the history of web publishing at universities I started doing some initial digging since. I hope to get deeper into this reseach in the coming months because it’ a total blast, but until then, let me share out some initial discoveries.

I got back an impressive stream of responses—more than 75 in all! I’ve embedded some of them below to give yiu an indicator of the range of dates and universities.

@rushaw @jimgroom When we installed HTTPD under VMS. Not sure year, six months or so after we installed our first VAX… say 1995? — Jim Greenberg (@greenbjb) February 10, 2014

@jimgroom Tilde space was available to grad students when I attended NIU in 94/95. You did have to fill out a form and give a reason. — Mike Caulfield (@holden) February 10, 2014

@jimgroom When I was still an undergrad, my SLAC made space available to faculty & students in the 1995 to 1996 time period. — Jason Parkhill (@JasonParkhill) February 10, 2014

While some of these personal web spaces were available as early as 1993, from this informal poll it seems that 1995 was the most common date for the collective memory on Twitter. And thanks to Tim Owens taking a spin on the Wayback Machine, we discovered the earliest recorded date for personal home pages at Mary Washington College (we didn’t become a University until 2004) was Fall 1996. That’s right, Domain of One’s Own is hearkening back to a tradition almost twenty years old. There was even a “community” page offering an index of all the staff and student home pages. There’s even a link for the howto.

A real pleasant surpise was that thanks to the awesomeness that is the Wayback Machine the links to these personal pages were archived. So we could see the various home pages of faculty and students linked to. And lo and behold Gardner Campbell‘s personal home page was right there-front and center. 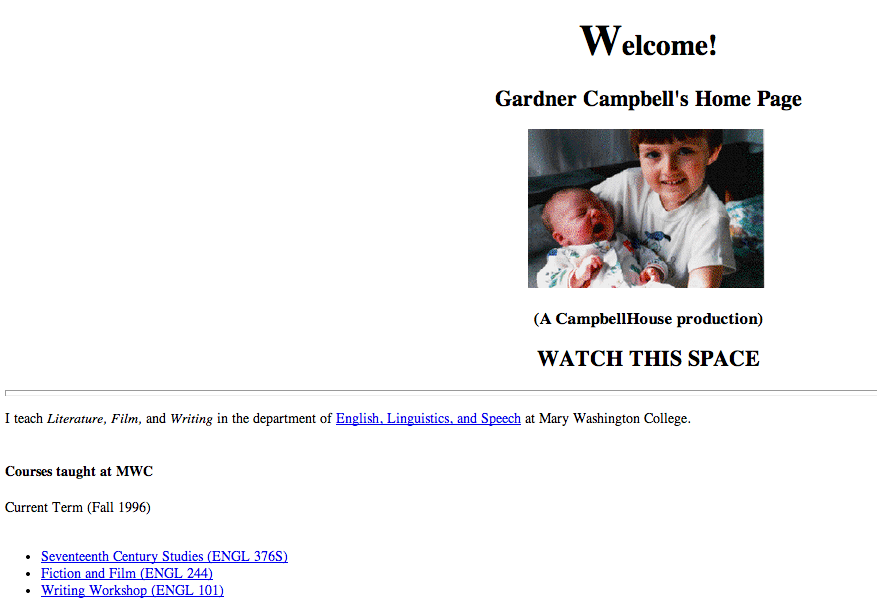 The page links to his various courses for that semester, has an image of his kids as the header, and a whole series of relevant, scholarly and personal sources below. Hell, I was even able to listen to a recording of “My Favorite Town” (a song he wrote, produced, and perfomed) on his bio page. The genre of the personal home page was in full effect already in 1996.

And this genre was not limited to faculty, below is a screenshot of Molly Barber’s  home page from Fall 1996. 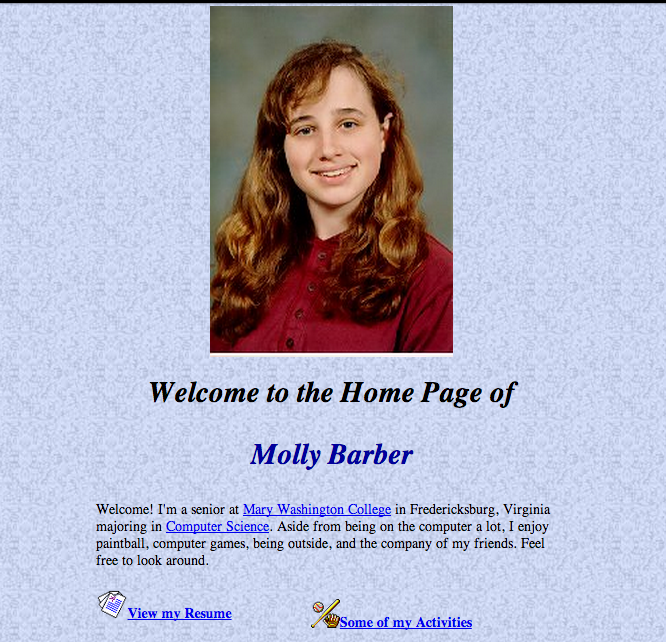 Molly Barber’s homepage at MWC circa 1996

The following image is a scan of a tutorial (which I got from Andy Rush who started me down this rabbit hole) Jim Greenberg  wrote about creating personal web pages at SUNY Oneonta. If you read it, you’ll notice users had to create the www directory, change permissions, FTP files, write HTML, etc. In other words, creating and managing a personal webpage on universities servers back in the mid-90s wasn’t simple. 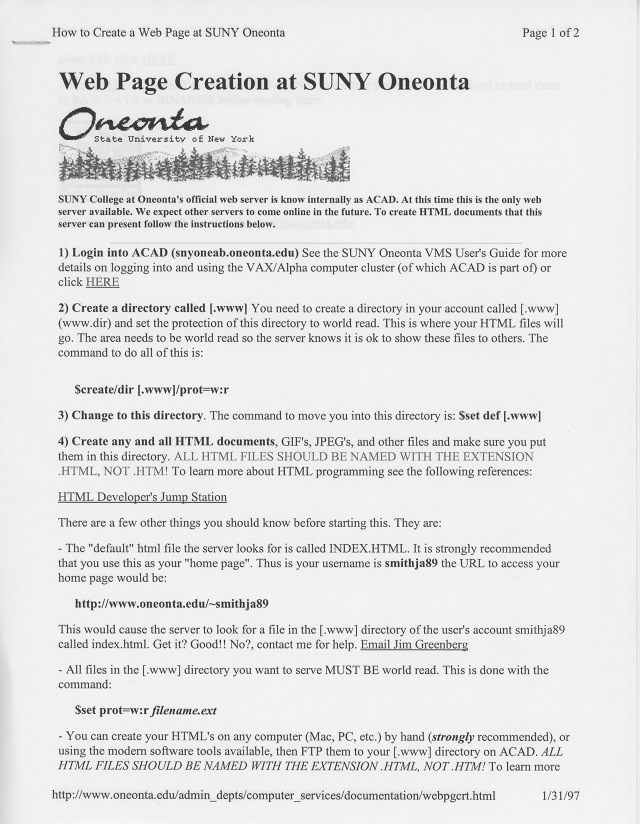 But, at the same time, it was an option that was empowering. A larger number of schools from small liberal arts colleges to big universities provided their students and faculty with personal web space. This was on par with the cutting edge services of the time like GeoCities—which also emerged in 1995. What GeoCities did well (and universities did not) was to use frontier and other spatial metaphors to link the folks exploring and writing on the web with “homesteaders” and pioneers that were building the virutal cities and neighborhoods of tomorrow. They featured their work and designed the entire site to promote community. To my knowledge, I don’t know of any universities that tried this out with their personal web spaces. Does anyone out there have any examples of something like this? 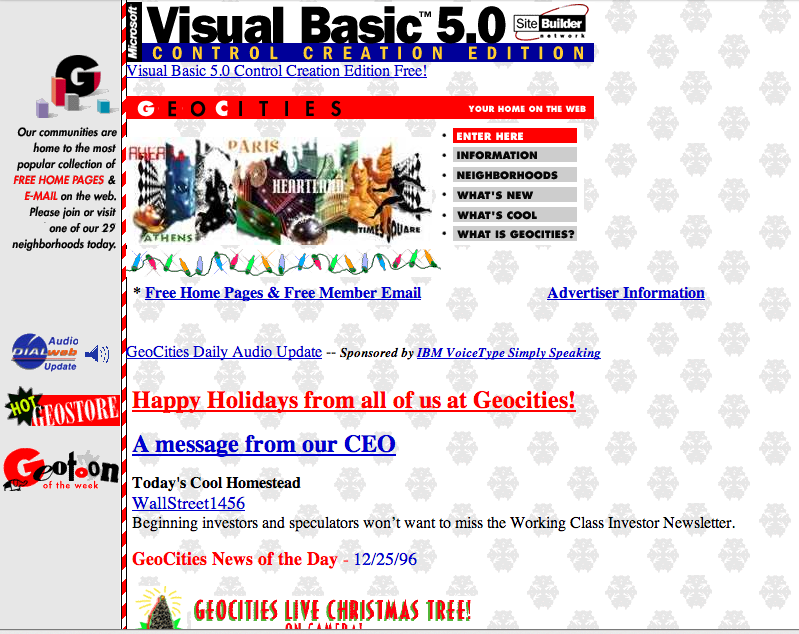 Here is a my personal favorite webpage on GeoCities from 1996. 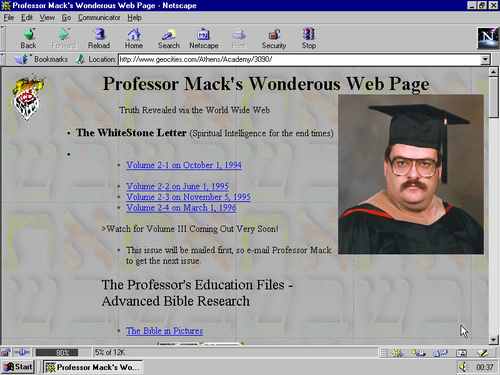 Another thing GeoCities figured out that universities didn’t was how to make creating personal web pages as easy as possible. They created a GUI interface for uploading files, managing those files, and editing HTML—not dissimilar from something like a streamlined CPanel. 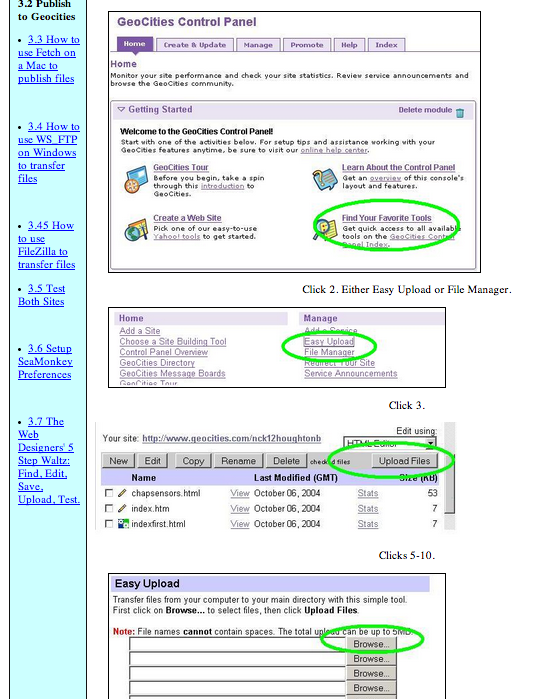 As a result, by 1999 when it was sold to Yahoo! for $3.7 billion, GeoCities was the third most popular site on the internet behind AOL and Yahoo! The dot.com boom was in full effect, and GeoCities was a model of social space on the web. The rest is history, a decade later Yahoo! closed Geocities and effectively trashed a whole swath of internet history. 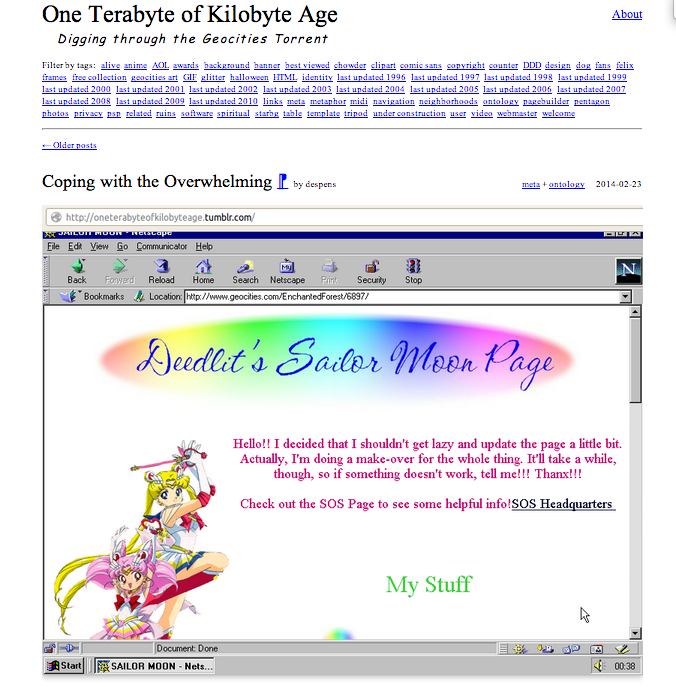 Thanks to the Archive Team‘s Herculean efforts, much of the GeoCities community was preserved and made available for free download a year after the shutdown. One terrabyte of data from the kilobyte age as Olia Lialina and Dragan Espenschied describe it as part of the cultural study/art project they’re designed around the terrabyte dump of more than a decade of web culture. Their work is truly inspiring and as Dragan recently posted:

The tumblr blog One Terabyte Of Kilobyte Age Photo Oppresents one way to make it all accessible, by transforming it into an exciting soap opera of screen shots.

With the Geocities Research Institute’s latest effort, categorizing the home pages can go as easily as checking tumblr: When accessed through the Geocities proxy server, each post is connected with the local database, widgets to view and modify the displayed home page’s metadata are inserted into tumblr.

It’s pretty awesome to think that after the corporate apocalypse that leveled GeoCities to internet kipple, a motley band of artists and archivists are picking up the pieces. Sadly, but not surprisingly, universities are nowhere to be found in this work—we’re too busy running conferences and doing digital humanities 🙂

On that note, while going through the Geocities FAQ from 1996 I stumbled upon this gem under the “What is GeoCities all about section?”:

We aspire to be positive contributors to this new culture. We’re committed to developing innovative ways to foster the spirit of community that is so vital to the future success of the Internet and the World Wide Web.

And under the “What is GeoCities hoping to accomplish?” section I found this:

Our homesteading initiative is just the first step in building World Wide Web based communities that are destined to become a vital part of the Net. Please send us an E-Mail if you’re interested in learning more about helping build the societies of the New Frontier.

What?! This is from the GeoCities FAQ? The idealism of the web was at full rhetorical throttle. This doesn’t sound like a business FAQ, this sounds like…like magic. A vision of a web that I would like to believe universities, the guardians of culture, would have taken on the responsibility for fostering. Promoting a generative web by cultivating distributed communities of open publishing at the institutions that helped build and create the culture for the internet more generally.

But, instead we got this…. 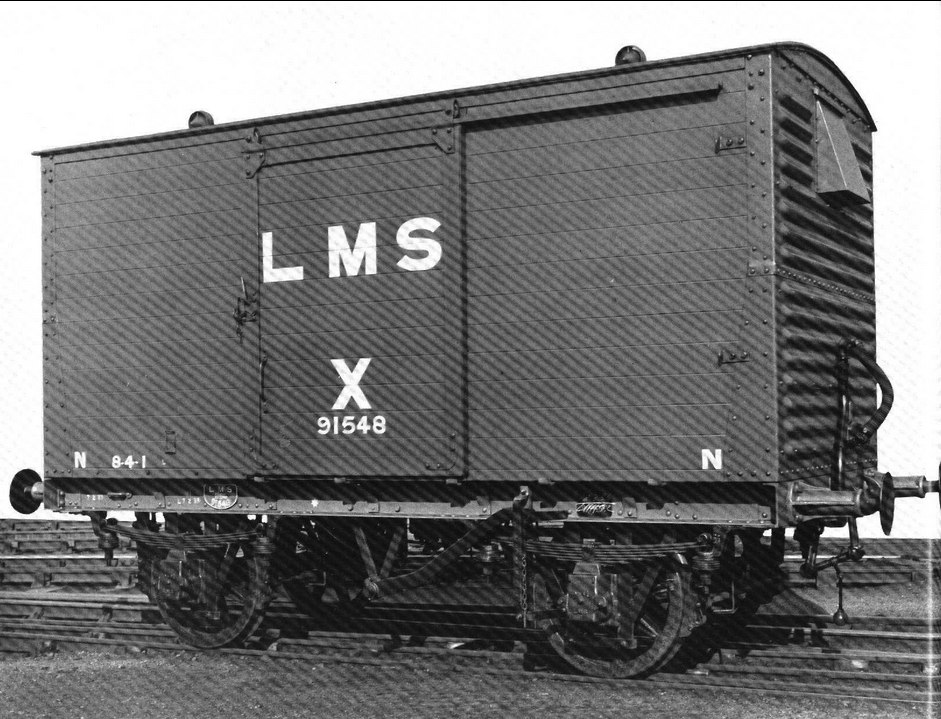 The blackbox for online publishing that was and is the learning management system (LMS). Like the pinetree deodorizers hanging from rearview mirrors, you could find one in every college and university. And as the world of Web 2.0 came around in the early 2000s the LMS became the rationale for dismissing blogs, wikis, and social media out of hand, while at the same time systematically discontinuing these personal web spaces provided on campuses without replacing them with anything else. The last relic of campus publishing spaces that tried, however pathetically at that late stage, to empower students and faculty alike were gone. So as we’re waking up from the hangover of a decade of innvoation lost at the hands of the LMS we are greeted with the corporate MOOC. As Mike Caulfield notes so brilliantly, it’s not Groundhog’s Day it’s Memento.

And where is the web in all this? Why are we surprised that we’re still pulling teeth as instructional technologists to get faculty and students to recognize the value of the open web when it comes to teaching and learning? For more than a decade the web has been systematically ghettoized as a dangerous space where people steal and victims are robbed (not entirely false, but not the whole story either). It’s during the Napster era that these educational safe spaces were introduced to “protect” our communities from the web, insulating us from what was possible at an astronomical cost. The fear and loathing surrounding the internet, copyright, and downloading that enabled universities during the late 90s to shutoff the web for anything beyond basic business operations is best summed up for me in the :38 second GI Joe PSA “Stop All the Downloading.”

And that’s basically the historical frame for the presentation as it relates to edtech. It’s not perfect, and it’s not done, but I will be presenting a few more iterations of this argument at least two or three more times over the next month. So any and all feedback is more than welcome.

I rushed through the final slides about how Domain of One’s Own tries to revisit the idea of web publishing at unviersities that breaks beyond the lip service to social media and the inevitability of the LMS and/or MOOCs. It’s time for universities to integrate the web into their culture across disciplines as a basic ingredient of literacy. But more on that anon, this post is way too long as it is, and I got to get some sleep. Here’s the slides for the presentation if you’re interested, and the video should be here at minute 34:00. That said, if you are short for time watch the presentation before mine by Jonathan Worth, as well as the one after by Kristen Swanson. They were much better than me 🙂

23 Responses to How the Web was Ghettoized for Teaching and Learning in Higher Ed?