When I was in graduate school I took a course about labor and cinema that had a wide range of post-war films coupled with readings from critical film studies, post-structuralist Marxism, etc. —you get the general late 1990s grad school drift (picnic, lightening). Anyway, at the
same time I was also working piecemeal as an adjunct as well as moonlighting with my brother, who was and still is, a floorlayer in New York City. I did pickup jobs as I could, and it paid a lot better than adjunct work. That said, it was brutal labor. (This weekend I was reminded how brutal when I installed 220 square feet of cement board on my kitchen floor in preparation for ceramic tile.) One of the things the films we watched always elided was the actual labor they were commenting on—-the very raison d’être of their politics. It is obviously an issue of narrative timing and all that, but at the same time it seems to have seeped into mass culture as an embarrassingly common visual/narrative reality. Just today whiel waiting in a doctors office I was forced to watch an HGTV show on cable—I spent the whole time hearing annoying rich people talk about their shopping sprees for deluxe amenities while the actual labor of the renovations was relegated to 30 second long clips at 16x the original speed. These are commercials, not DIY shows. They focus on the product of the labor, and sell you that—their is no attention paid to how painstaking it all is. This is exactly what’s happening with the narrative around the labor of teaching and learning right now more generally—talking head videos with venture-backed, profit-driven cures—but I digress. 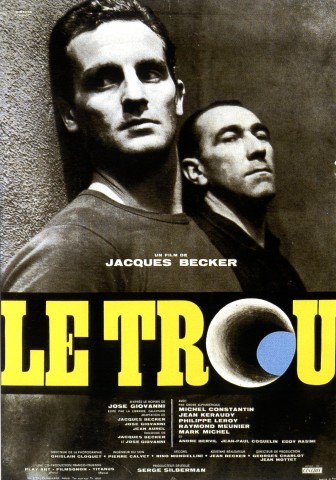 The point of this post was simply to say how blown away I was by Jacques Becker’s 1960 prison break masterpiece Le Trou (translated as The Hole). This is the second film I have seen by him this week (I wrote about Touchez pas au grisbi in my last post) and I can’t get enough. Le Trou puts five prisoners in a room (mostly non-actors) and creates a world within the cell in which the most minute details become elongated cinematic poetry of beauty and possibility. What is interesting to me about Le Trou against the vision of labor that you often see in “representative” films about work is how abject it is abstractly—I’m thinking here of the British kitchen sink dramas like Alan Sillitoe’s Saturday Night, Sunday Morning, or labor movement dramas like Norma Rae in the 70s, and especially Michael Moore’s sentimental Roger and Me in the 1980s—is how the labor is insisted upon as a way out rather than an abject trap. The work of breaking up a cement floor with a bed leg to get beneath the cell is the subject of a 9 minute scene in Le Trou. What’s more, the actors are actually working,  they are taking turns breaking up the cement and for me watching it was insane because breaking up a cement floor with a metal bar is excruciating labor I can clearly imagine. I have a clear sense of how hard it is rip up a floor with hardcore power tools, no less a simple metal bar taken from a cot. I couldn’t help but marvel at this moment of work being documented—it spoke more to me about the intense realities of labor than any of the films I have seen before it. What’s more, it was not abject labor, it was labor with a purpose to escape the abject system of prison—it was unbelievably hopeful  in that regard. What the entire 9 minute scene below, if you dare 😉 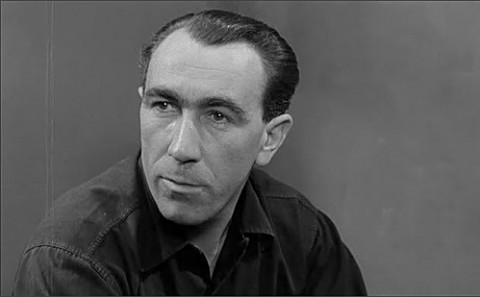 The other thing I loved about Le Trou was how compelling the character Roland  Darban (played by real-life prison escape artist Jean Keraudy) was throughout the film. His exactitude and brilliant improvisation on everyday details to escape from  La Santé Prison kept me riveted. Everythign around him was a tool, and the way Becker focused on how he uses his hands to make amazing tools out of everyday objects throughout the film was nothing short of genius. For example, Darbant makes a periscope for looking out of the prison door peep hole using a broken piece of glass and a tooth brush. The film is no simply focused  on the act of making, but the beautiful the beautiful cinematic shots that result from it having been made. Watch the short 55 second sequence, and check out my experimentation with multi-shot GIFs to reproduce this moment below.

Darban also makes short work of a metal prison bar with a hack saw blade (he also makes a master key with that hacksaw as well). The prolonged focus on the hacking of a prison bar is one of many labor intensive scenes that provides the opportunity to focus in on the film and try and consider its ethos. It’s all about precision, seeing possibility everywhere, doing a lot with nothing, and more than anything work. Hard work! The tools are barebones, they’re everywhere around us, but they make for a beautiful narrative of escape from the systemic logic that has us all cell bound to some degree. It’s a cinematic ethos that Becker establishes in this film, too bad he died soon after making it. It reminds me a lot of the “Internet of Attractions” idea I have written about previously, and I want to return to that concept with Becker’s film in mind. Here’s to cutting through those bars!