Lina Wermuller’s All Screwed Up

Antonella and I watch a lot of movies. We try and watch one every night, although that doesn’t always work out, we tend to get five or six in a week, sometimes more. This week we have been exploring the early career of Italian director Lina Wertmüller, in particular Love and Anarchy (Film d’amore e d’anarchia, ovvero: stamattina alle 10, in via dei Fiori, nella nota casa di tolleranza…) and  All Screwed Up (Tutto a posto e niente in ordine) made in 1973 and 1974 respectively. I really love the free-wheeling, anarchistic energy of her films, and they remind me of Pasolini’s later films  and Almodovar’s earlier work. Nonetheless, her films have their own sensibility that struggle with anarchism, labor struggles, gender inequality, as well as the absurdity of it all. 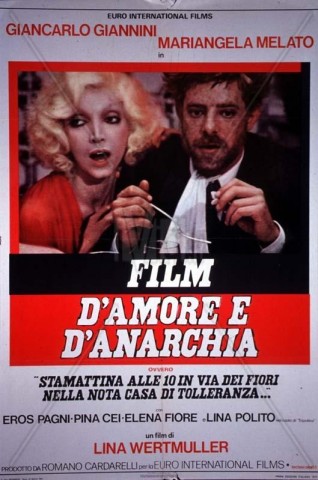 Her films have their own sensibility, and she creates a simultaneously ribald and tragic air to her narratives. Much of Love and Anarchy takes place in a brothel, and it may have some of the most insanely vulgar Italian I’ve heard to date, which is probably fairly useful given I’ll be living there in a few months. The film takes place in Fascist Italy right before World War II and centers around an anarchist (Giancarlo Giannini)  who stays at a brothel in Rome while preparing to assassinate Mussolini. How’s that for drama? There is a scene that takes place amongst all the prostitutes at the dinner table in the brothel that might be one of the irreverent conversations I can remember. Now that I think of it, this film reminds me a lot of Werner Ranier Fassbinder’s The Marriage of Maria Braun given they both focus on prostitution as an allegory for European fascism. 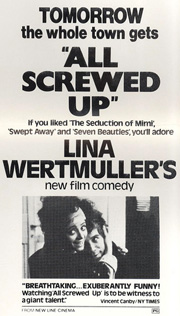 Wertmüller made All Screwed Up a year later, and the film takes place in Milan during the early 1970s. Much of the drama plays out in a tremendous kitchen where several of the film’s central characters work, and it provides an allegory (like the brothel in Love and Anarchy) for the regional and social struggles at work in Italy at the moment. What’s more, the owners of the restaurant are fascists and towards the end of the film employ a group of “demonstrators” (one of whom is an unsuspecting Sicilian who is doing anything and everything he can to support his seven children) that set off a bomb on the streets of Milan that kills several people.  As we hear later on from one of the characters in the kitchen, all because the fascists wanted to prove to the industrialists that they mean business when it comes to standing up to labor. An allegory for the last four decades even?

Additionally, this moment would be powerful for anyone in Italy during the early 70s, a time referred to as the Anni di piombi or the “years of lead” given how much blood was shed between labor groups, fascists, the mafia, the police, and various terrorist organizations representing both the left and right political persuasions. It must have been a crazy moment in Milan—where much of the violence was centered—and one I have been wanting to learn more about for a while now. Like the Poliziotteschi films of this period such as Fernando Di Leo‘s Milan calibro 9 or La mala ordina, All Screwed Up make a mod to the street violence and random acts of terror throughout this film, not to mention the struggle between greedy developers trying to evict an entire working class housing project, a world in which both men and women are forced to prostitute themselves literally and figuratively to capital. It’s a striking and at times difficult movie, but it really blew me away. I’m gonna watch anything I can from her during the 1970s, there’s a truly unique commentary on the moment of 1970s Italy that I find truly fascinating.

Harvard University had a Wertmüller retrospective back in May and June of 2008, and that is a film series I would have loved to have gone to. The site for the retrospective provides a nice overview of nine films from the 60s, 70s, and 80s  that have come to define her career as a great Italian director.