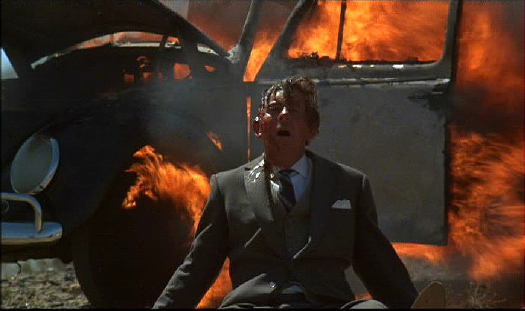 This week has been a long one, the semester starts Monday and I have much to say about my recent experiments with Drupal, MediaWiki, bbpress, Open Journal Systems, and WordPress. But until I muster up the time and energy to discuss this work in more detail, I wanted to share my two cents on a wild movie I saw recently. After asking my wife to tell me what was playing at the Film Forum in New York City (oh, I miss that rotten apple!), I stumbled across a movie that blew my mind: Walkabout (1971).

The New Yorker recently had a brief review of Nicolas Roeg’s Walkabout in which they noted that this film was a generational landmark of the late 60s, early 70s on par with Dennis Hopper’s Easy Rider. After reading this comparison I wondered why I hadn’t seen, no less heard of, this film before. So, I got on Netflix and rented it, and I was not disappointed. The cinemotagraphy is unbelievably beautiful and the story is sparse and powerful. It follows two young children (a brother and sister) abandoned in the Australian outback by there father. Being left for dead in the desert they are unexpectedly rescued by an Aborigine boy who is on his “walkabout” -a ritualistic banishment from his tribe that forces him to survive on his own in the desert wilderness. It seems that much of Terrence Malick’s filmic style -his protracted shots of nature in juxtapostion with humanities estranged space within its majestic order- seems to directly quote much of Roeg’s style in this film. You can fit the amount of dialogue in the script on a napkin. The consistently intelligent and profound shots communicate the author’s argument as effectively as the most finely crafted dialogue ever could. A radically different film that offers a glimpse into the amazing possibilities of transformative visuals during a moment of the late 60s and early 70s. If you like photography, funky desert movies, or just damn good cinema -I highly recommend this gem!

This entry was posted in movies, Uncategorized and tagged general. Bookmark the permalink.