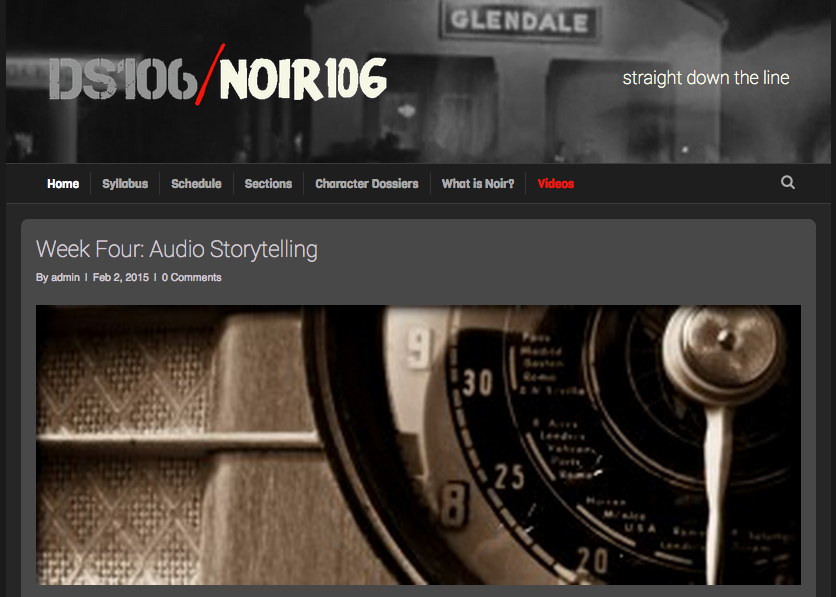 We’re already well into week 4 of Noir 106 and I am just realizing I haven’t officially blogged about this iteration of the multi-faceted cultural chameleon that is ds106 (#4life).  Coming off the focused, intense tour de force that was wire106 (a 15 week exploration of The Wire via digital storytelling), this semester we switched it up a bit. We went broad, and decided to use the theme of noir as the creative catch-all through which we approached the class. The move to noir more generally is born out of some of the classes Paul Bond and I have co-taught over the last three years, namely Hardboiled and True Crime. More importantly though, this class is also the brain child of a former student from wire106 (who will remain nameless at the moment for narrative concerns) who pushed me beyond a narrow focus on 1980s TechNoir, as well as the ever-brilliant Martha Burtis who tied the whole thing together—as she is wont to do.

So, we have three sections of ds106 running at UMW this semester all of which are effectively being taught by all four of us. We are treating the class as a larger noir narrative, and the weekly assignment videos are also the frame for an evolving plot—which is about to get a bit nutty. What I am really enjoying about this class so far is the fact we have a cadre of 70+ UMW students who are taking this course online with four distributed docents—each having both an instructional and narrative role in the course as it unfolds. Very fun! It is yet another example of how collaborative, coordinated teaching has become a given for me these days.

I could go on and on, but let me quickly point out three quick elements of the course right now that I think rule:

1) The work Mariana Funes has been doing with the Daily Creates is amazing. UMW students consistently refer to this part of the course as their favorite. Just take a look at today’s Cute Puppy Alert, and tell me they aren’t having fun. Quick, creative exercises to keep everyone engaged and connected. Mariana wrote a post about her approach and thinking behind all the time and energy she has freely volunteered to this work. She embodies the best of the web: open, thoughtful, and generative. 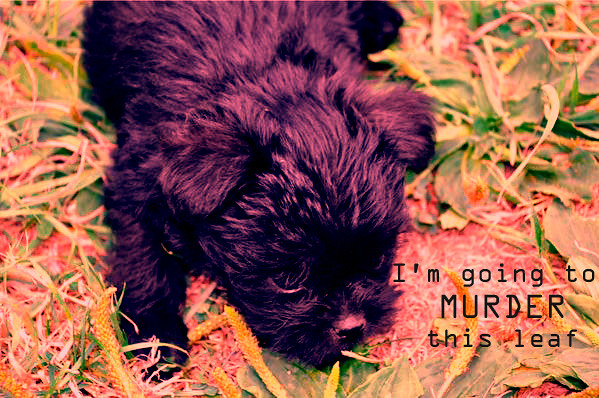 2) The online, distributed approach to communal activities continues to be one of the most compelling elements of ds106. Paul Bond has been scheduling old school noir radio programs on ds106rad.io from 8-9 PM (Eastern Time). The last three nights we have had listen-alongs wherein students are asked to listen and tweet about the show using the #noir106 hashtag on Twitter. I tuned into last night’s show featuring Edward G. Robinson as Sam Spade in the 1943 radio production of The Maltese Falcon. Tonight was Fred MacMurray and Barbara Stanwyck reprising their roles from the 1944 film version of Double Indemnity for Lux Radio in 1950.

The response thus far has been encouraging:

@jimgroom will there be other tweet-alongs during the semester? That was fantastic! #noir106 — July Laszakovits (@JuLaszakovits) February 4, 2015

Paul wrote about the first two listen-alongs here and here. I recommend those two posts for more context and insight to the process. I love that ds106radio continues to provide a space where we can build community as part of an online course in fairly distinct, compelling ways that seem somehow more germane to the web than locked away discussion boards in an LMS. Call me crazy.

3) Last, but certainly not least, is the work Martha Burtis has been doing with UMW’s Digital Knowledge Center (DKC), which has effectively changed the game for teaching ds106. Over the last five months Martha has conceptualized and built out a peer-tutoring center for digital projects. We have been sending our students to these tutors (many of whom are ds106 alumni—all of whom are awesome) for help setting up their domains, using WordPress, editing images, using audacity, and various other tasks as they come up. We can scale ds106 at the level of the individual student in ways that we never could before. And ds106 is just one of the many courses the DKC tutors support. What’s so rad is that we aren’t just saying “Domains are awesome.” “We’re the digital liberal arts.” “I’ll flip your burgers.” We are backing it up.

We have built the capacity to support our community as we continue to rollout an increasingly robust curricular push to integrate some broader vision of digital fluency across the disciplines. As an instructional technologist, consider how different your collaboration with faculty members can be if you’re able to provide targeted support for an entire class of students? It’s changing the way we work, and has the potential to dramatically augment our impact on the academic mission at large. And Martha’s long-held vision and execution of this center has proven to be as precise as poetry.

So, it’s been a good start to the course thus far. And I even haven’t started talking about all the awesome work the #ds106 internauts are doing, but I’ll save that for another post.