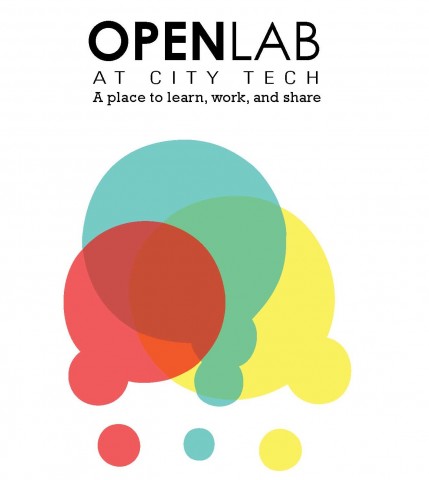 Yesterday I had the honor of both attending and speaking at the launch of CUNY City Tech’s  community publishing platform Open Lab. Built on a WordPress/BuddyPress combo, Open Lab follows in the rich tradition of  similar sites at CUNY like Blogs @ Baruch and the Academic Commons. And well before its launch, Open Lab has already gotten major buy-in from around the campus community.

Why? Well in part because there have been resources put towards the project thanks to a Title V grant secured by Matt Gold and Maura Smale, which reinforces how important resources are not simply to get things, but rather to get good people to do great things. And that’s where the real gold at CUNY is right now, they have an unbelievable group of people at a number of campuses pushing the open education movement from all angles. An Open Lab just brings that many more great folk to the ground swell of open education initiatives  happening at CUNY, people such as Maura Smale, Charlie Edwards, Jody Rosen, Jenna Spevack, Elizabeth Alsop, Boone Gorges, Scott Henkle & Bree Zuckerman—to name just a few. Successful open education platforms are not born at colleges, they are built by people —Open Lab gets this, and they are using their resources intelligently as a result. The funding is being funneled to people to reach out to faculty and students and work directly to shift the culture and shape the future towards open. Open lab is the platform through and on which this cultural shift will all play out, and what’s awesome about that is it will be readily available for all of us to witness. I was honored to be with them on opening day, and I look forward to more and more CUNY folks to collaborate with as we start thinking beyond our institutions.

On another note, I tried out a new presentation geared towards the Open Lab project, but also as a way to try and focus on some of the elements I think make a community like this work. I focused on the importance of integrating pop culture, media, and remix into an online community framework. The idea for me is that a community in the 21st century needs to understand the idea of the viral and embrace it to some degree—basically acknowledging that the visual vernacular of our moment is essential to understanding what makes for compelling cultural interaction on the web. I’m not sure I succeeded, but rather than talking about ds106 I featured work from folks like Nick Antonini, Emily Deane, Emily Del Ross, Andrew Allingham, Ben Rimes, and Jack Mulrey. The idea was to show how ideas are at their best when they are riffed on and played off of , and that the idea of open is always framed around the potentiality of “going viral”—and while that is not necessarily the goal it does add an element of awesome to the whole thing.

This presentation wasn’t perfect by any means, but I love the idea of focusing more on work people have done rather than what ds106 is, especially given I am not always entirely sure what it is depending on the day. After a brief overview of the community, I think the time is better spent demonstrating what people do with it, and how it might speak to the vernacular interrogation of pop culture that fascinates me most about the whole thing. The presentation got a bit crazy when I was talking about Andrew Allingham’s Boatload vs. Buttload vs. Shitload going viral, and I was as loose as I have been in a while which could be good, but sometimes makes the whole thing a bit more unpredictable. A special thanks to the good folks at City Tech for seeming to enjoy it all the same.  There was video taken of the event, and I hope to be able to embed it here soon, but in the mean time here are my slides.

Update: Here is the video, and other than it being nuts there is one small mistake, I said 5 million pageviews daily on UMW Blogs, which is absolutely not true, I meant yearly. My bad 🙂 Thanks to the good folks at OpenLab for publishing it.