Everything is downloadable on UbuWeb. Don't trust the cloud, even UbuWeb's cloud.

Over a week ago Tim got a one-click installer working on Reclaim Cloud for PeerTube. He got the details up on the Reclaim Hosting Community site already, so you can read more there. 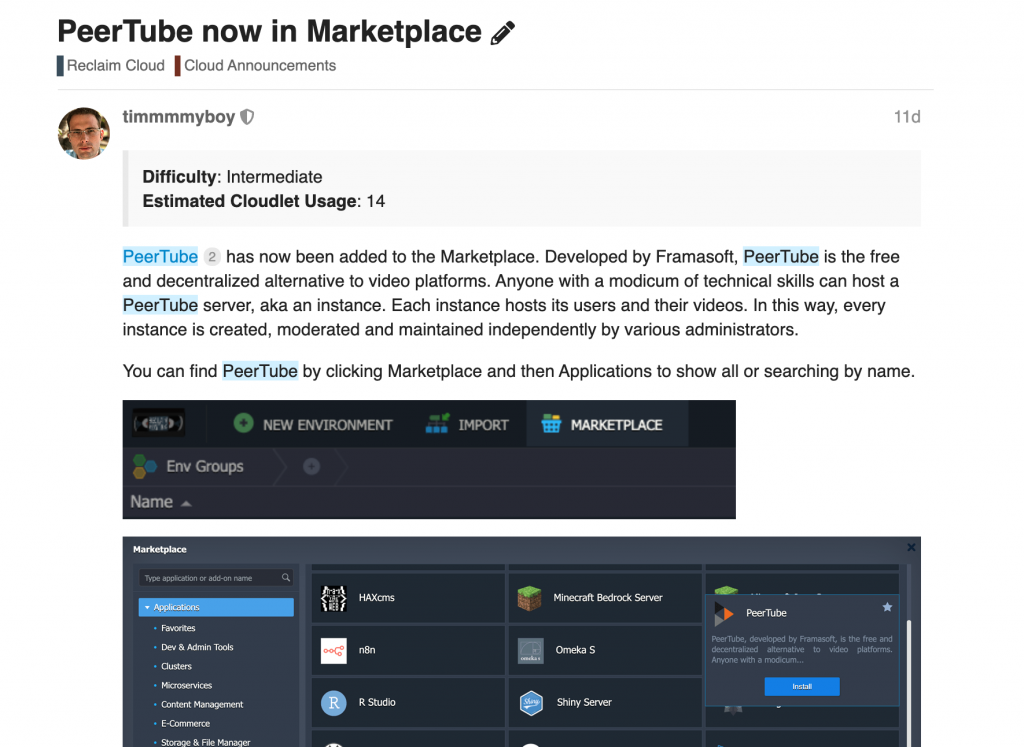 Getting one-click installers working for a wide variety of apps is a big bonus of Reclaim Cloud, and between Azuracast and PeerTube we have the vertical and horizontal pretty well locked-in. I wrote a bit about my explorations with PeerTube already on this blog so feel free to follow that linked rabbit hole for more. But the long and short of this application is that you can upload videos to your own instance of a fairly robust Youtube-like interface. It has a growing peer-to-peer network, and one killer feature is that it can upload and archive just about any video on the web with a URL. I use it regularly to archive videos I watch online given the broken web copyright creates as a result of YouTube take-downs which highlights the worst of the service-centralized internet.

In fact, while Tim and I were working through the PeerTube installer I was watching the 1995 documentary Sonic Outlaws by Craig Baldwin. The copyright bugbear has been with us well before YouTube, and Sonic Outlaws focuses on the fallout of Negativland‘s  decision to parody U2.

Within days after the release of Negativland’s clever parody of U2 and Casey Kasem, recording industry giant Island Records descended upon the band with a battery of lawyers intent on erasing the piece from the history of rock music.

Craig “Tribulation 99” Baldwin follows this and other intellectual property controversies across the contemporary arts scene. Playful and ironic, his cut-and-paste collage-essay surveys the prospects for an “electronic folk culture” in the midst of an increasingly commodified corporate media landscape.

So, long story short, I wanted to see if PeerTube could use the YouTube-dl code to grab and upload the copy of Sonic Outlaws on UbuWeb, and turns out it can, the only thing is the metadata was not included, but that was fairly easy to fill in.

After that I got to thinking about the initial Tweet of this post from UbuWeb about downloading videos and not trusting the cloud.

Everything is downloadable on UbuWeb. Don't trust the cloud, even UbuWeb's cloud.

I wonder if an application like PeerTube might help bridge that gap a bit by re-decentralizing the cloud so that folks could download and share collections like UbuWeb across numerous servers and local machines in order to not only build their own collections, but share them, and hopefully circumvent the copyright trolls that come with the territory of a centralized video service such as YouTube.