Following-up on my previous post about PeerTube as a video archiver, I just remembered that I hadn’t grabbed a copy of the early 1980s documentary Mall City currently making the rounds. It’s the product of a NYU student film crew documenting social life at a mall on Long Island, in particular Roosevelt Field in Garden City. This is of particular interest to me because that was my childhood mall of record. I know the stores; I feel like I know the people; and I definitely sunk more than a few quarters in that arcade. So, anyway, it’s a pretty interesting document of a time and a place, especially now that we seem to be living in a post-Mall America. You can watch it on YouTube at the link below (for as long as that lasts):

But I wanted to use this film as an example of what an import of a video on YouTube (or Vimeo or just about any service) looks like using PeerTube.

I go to the “Import with URL” tab on my PeerTube instance and copy the YouTube URL to my personal channel (http://bava.tv):

After that I should get a screen highlighting all the videos metadata (this did not work with UbuWeb, but there may be the ability to scrape that info): 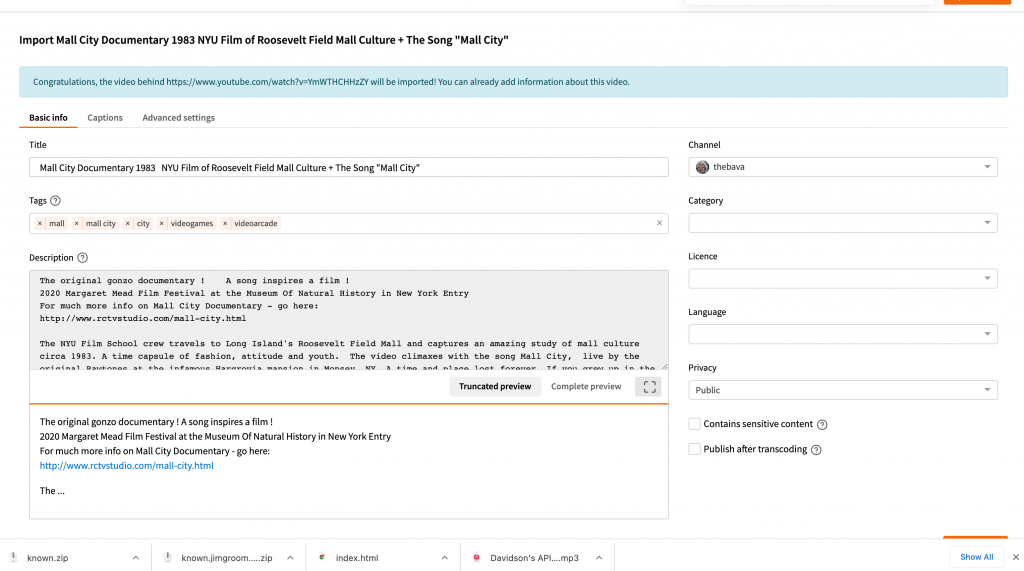 After that you simply click import and the video is on your channel in seconds with all the metadata and the ability to be shared with other PeerTube instances, downloaded, etc:

The embeds also work well with WordPress as just an oEmbed link, but there is embed code as well. The one thing that might be tricky is storage can get heavy for your cloud instance, but turns out that it’s pretty cheap. That said, if you’d rather have the videos on a hard disk Youtube-dl code can also do that using their command line tool for PeerTube, so this app can just be a way station on the path to archival heaven.