Professional Development in the Cloud

I am just coming off  a couple of hours of watching Stephen Downes work his way through some of my Ghost tutorials.

It’s not only quite useful for me to watch someone make heads or tails of my tutorials, but I also find it oddly compelling viewing. I wanna know if he figures things out after all the obstacles I placed in his way, a strange cliffhanger that provides me clues along the way for how I can be clearer and better. Maybe I have found my Youtube genre after all!

But beyond these videos and tutorials, which will have a very limited appeal, the broader push right now for professional development in Reclaim Cloud has been quite rewarding. Just this past Friday Meredith, Taylor, Goutam, and myself jumped on a Slack huddle and tried to figure out how to migrate an outdated Mattermost instance to an updated version in a new environment.* It took us an hour and a half, and we were new to PostgreSQL which was a learning curve, but against my wildest expectations the migration was successful in large part thanks to Taylor and Meredith’s experimenting and riffing off one another, which was so awesome to see.

A 90 minute call figuring out how to migrate Mattermost containers between upgraded versions with @meredithfierro and @TaylorJadin some of the best professional development I've had at @ReclaimHosting yet. We've only just begun!

It reminded me of why I like this forgotten corner of edtech so much. I deeply enjoy continuing to try and wrap my head around the tech, which has never been easy for me, much like the writing I struggle with to explain it. Having folks traveling that road, like Downes in his “Stephen Follows Instructions” series, reminds me how valuable it is for folks to share the work they do to help you grow. That was always the core of blogging for me, professional development with a sense of generosity and hopefully a reciprocating audience. As opposed to all the whining and complaining that has dominated the platform posturing that’s taken over most other spaces like Twitter, Facebook, and Instagram, all of which  leaves me wanting—most especially when I engage in it.

Configuring Email for a Ghost Docker Container on Reclaim Cloud

I think the joy of exploring Ghost as Reclaim’s newsletter over the past two weeks has been the meetings with Taylor, Pilot, and Lauren to chat about what’s possible, while interrogating the tech, and sharing what we we know and what we’ve learned. That’s always been the sweet spot for instructional technology for me, and the idea of doing it afresh for the Cloud with a crew at Reclaim and beyond makes me quite happy. My recent flood of blog posts sharing what I figured out is a testament to that, and I know I’m in the zone when the blog is flowing forth with disposable pearls like this one. 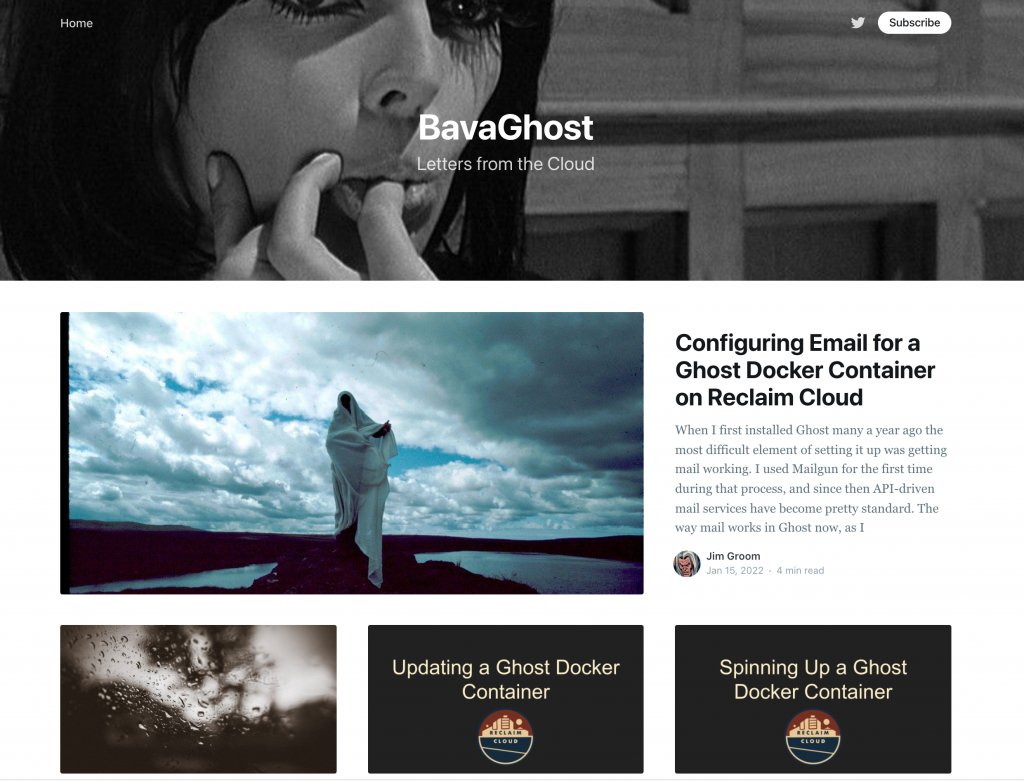 In fact, looking at the Ghost site I’ve been experimenting with since 2014 in many ways tells the tale of this work. Not only in the details, but in the amount of time and energy it takes to try and dig in and understand something beyond empty terminology and speculative conference presentations. Instructional Technologists need to be more than gatekeepers (or even worse apologists) for the campus learning management system; they need to dig in and understand what drives the tech and how it more broadly shapes the work we do—it’s why the wholesale dismissal of Web3 by so many with pithy tweets about it’s emptiness strikes me as hypocritical, especially when coming from recovering Web 2.0 evangelists. I have my deep doubts for sure, but if Web 2.0 has morphed into the concentration of the web into corporate silos like Twitter, Facebook, YouTube, and Google then I’m absolutely ready for alternatives. Nothing replaces doing the work.

*The reason for doing this migration is pretty instructive in how we might want to approach containers in Reclaim Cloud more generally. The Mattermost instance was a one-click installer through Jelastic (our Cloud software provider) that had not been updated for several versions, and when they did update it the existing instances could not be updated that that later version. Hence, we had to do a manual migration. This points to a discussion around trying to limit the marketplace apps to official Docker images rather than custom stack installations via Jelastic given they don’t seem to age well, and the straight-up Docker installs through Docker Hub require fewer Cloudlets, which means they are usually cheaper. In other words, the jumping in and playing has led to some more focused attention to what is going to work in this space for us and our clients.

This entry was posted in Ghost, Instructional Technology and tagged edtech, ghost, reclaimcloud. Bookmark the permalink.

3 Responses to Professional Development in the Cloud