On Wednesday of this week Tim and I caught up on some arcade repairs. Coming into Reclaim Arcade via robot I’m more a cheerleader/annoyance than help, but I learn a ton so at least one of us gets something out of it 🙂 The back room was starting to fill up with non-working games, so it was good to see which ones we could resuscitate fairly easily. Space Invaders and Mouse Trap both have bigger monitor issues we need to address, so those two were left untouched. But I think we got everything else back up and running (even the parted-out Gyruss cocktail), which is damn impressive.

The fixing of these games is a strange affair. Games can be down for a while and once you remove the control panel, readjust a fuse, or wiggle a wire it works again. As Tim noted, those are not very satisfactory fixes when they happen because nine times out of ten the issue returns, but we always play the 10% angle 🙂

Gauntlet was the first game we looked at given it was not booting. We had this issue before and once we swapped out the PCB Rom board it worked again. We got the previous board looked at and there were no issues, so we swapped it again (to the board we originally removed that had no issues) and it worked perfectly. So, the jury is still out on this. It could be an edge connector issue? Not sure, but for now we are playing the quick, yet unsatisfactory, win. Especially given this was the biggest game in the backroom, and getting it back out on the floor freed up working space.

Mortal Kombat had monitor issues wherein it was making a strange noise and the screen was garbled at boot. But when we opened up the control panel and then tried to open the enigmatic back door of this Dynamo cabinet (ultimately to no avail) we realized the game was booting as it should. One of those magical “fixes” that leave you even more unsettled, but we did not need to put it back on the floor so we left well enough alone and moved on.

Next up was Karate Champ, which means we were working on the third of five games in the back room.  This game was having issue with the right player 1 joystick moving to the left (or was it down?). Either way, one of the directions was not registering a move, so the game was not working correctly. We opened up the control panel, which annoyingly uses bolts rather than a latch system, and discovered an easy fix, the contact had been removed. YEAH! That’s 3 for 5! But not a satisfactory fix in the lot yet. 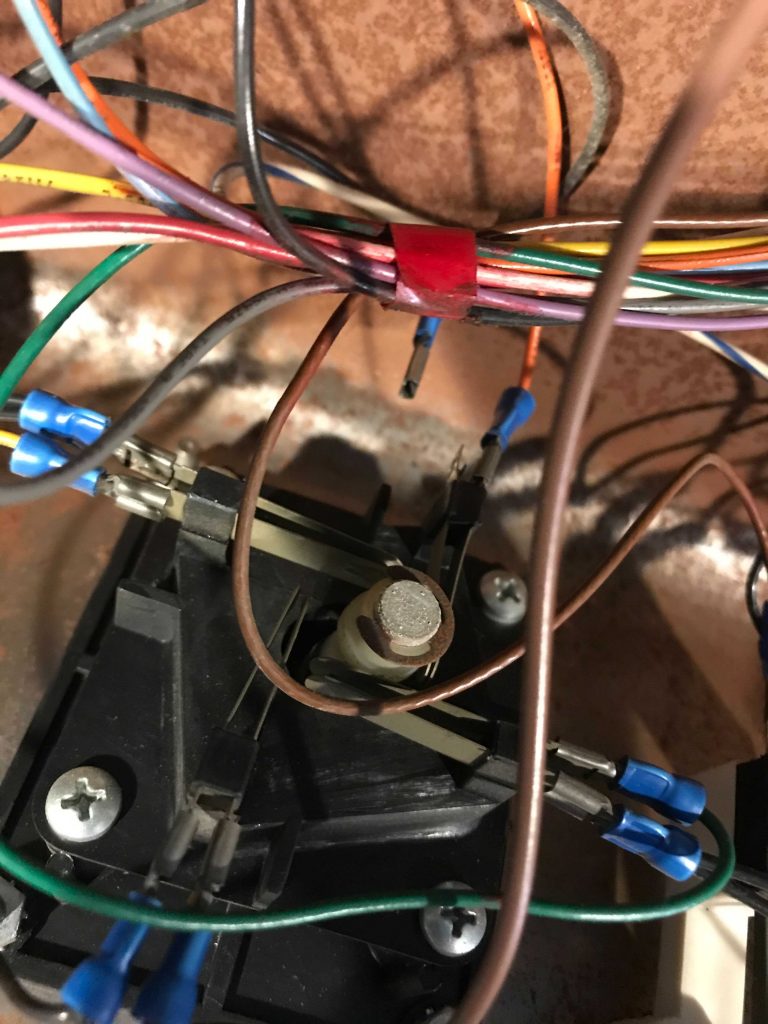 On Karate Champ there is a separated blue contact point right under the red tape holding together wires, once that was plugged back in the back kick worked

We put Karate Champ back on the floor in Q*Bert‘s place because while Q*Bert is working currently, it has been going down consistently blowing fuses, so we ordered a new fuse set and will make sure we have the right fuses in there before trying again. There may be deeper power issues, but only time will tell.* 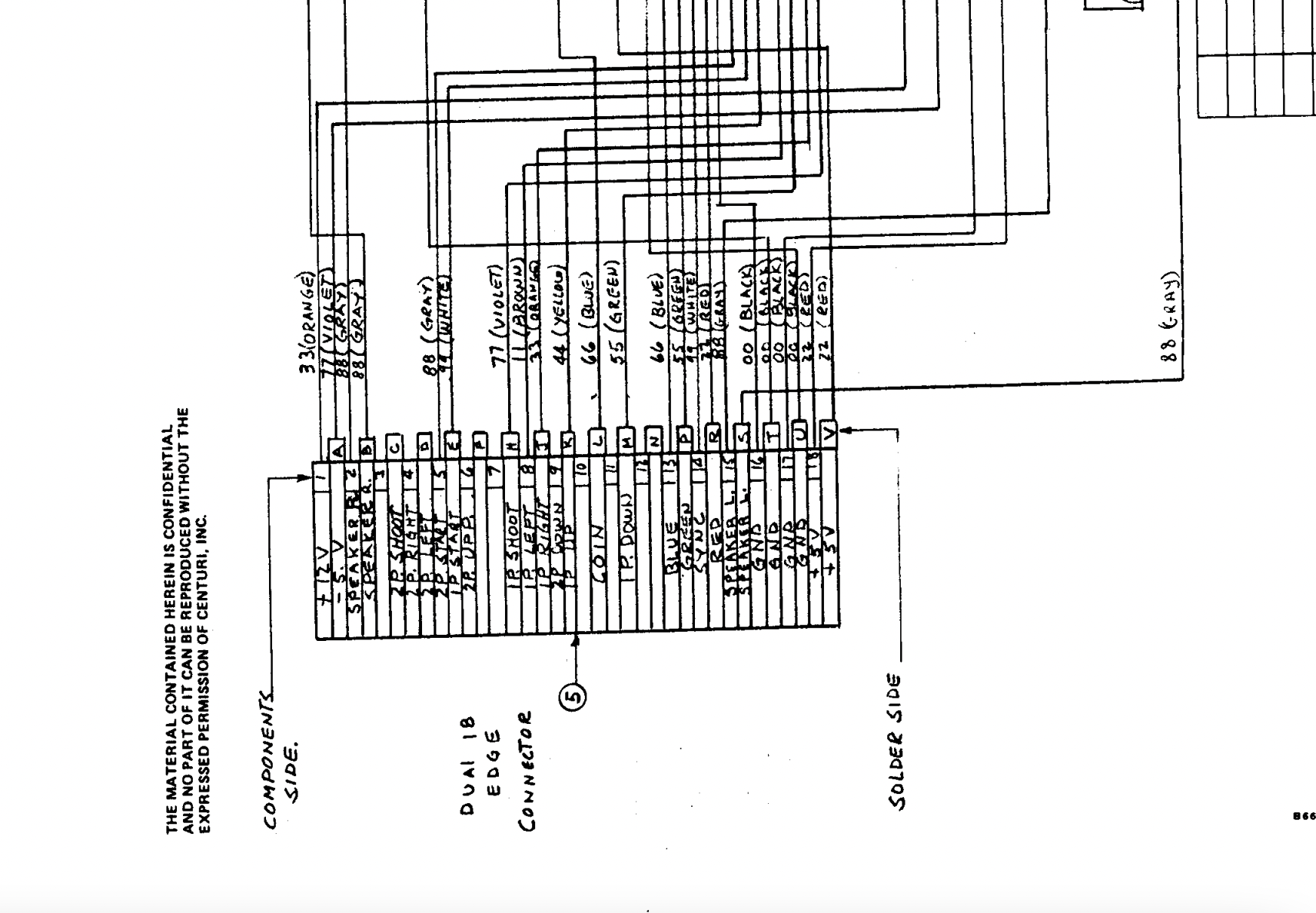 The Make Trax fix was a simple one. We swapped the current board that did not have working sound with the one we had repaired back in February, and that game now has sound. That was a satisfying fix for me, cause the sounds of Make Trax are at least half the game play.

And just yesterday we returned to an old project, the Gyruss cocktail we have currently working as a TV stand in Reclaim Video. This was Tim and I rolling on our good fortune, but it also meant Tim finally got what he asked for, a satisfactory fix. Our Gyruss Cocktail had laid dormant since we got it over a year ago, and while working when Tim picked it up, we never saw it working once we had it back at HQ. We were having issues with the monitor in the stand-up Gyruss cabinet we have out on the floor, and given we have two Gyruss cabinets, there was no rush to get it fixed. That said, we are expanding Reclaim Arcade, so having another cocktail game might be useful, so we wanted to just take a look and see if we could get it back up and running, and if not what parts we needed to order. The first thing up was the monitor. We needed to re-attach the monitor from the stand-up cabinet to a chassis and test that to see if we got that far.† We did as much, but were not getting power, so we looked around and realized the switching power supply was also parted out to another machine, but luckily we had an extra and went about hooking that up. This is where and when I learn a ton because you have to hook the PCB board up to the power supply, and that means understanding which connection goes to which voltage slot–and if you get it wrong you could short out the board. Tim found the above schematic outlining the different connections, and I am slowly understanding how to read these, which is key the deeper I get into repairs. 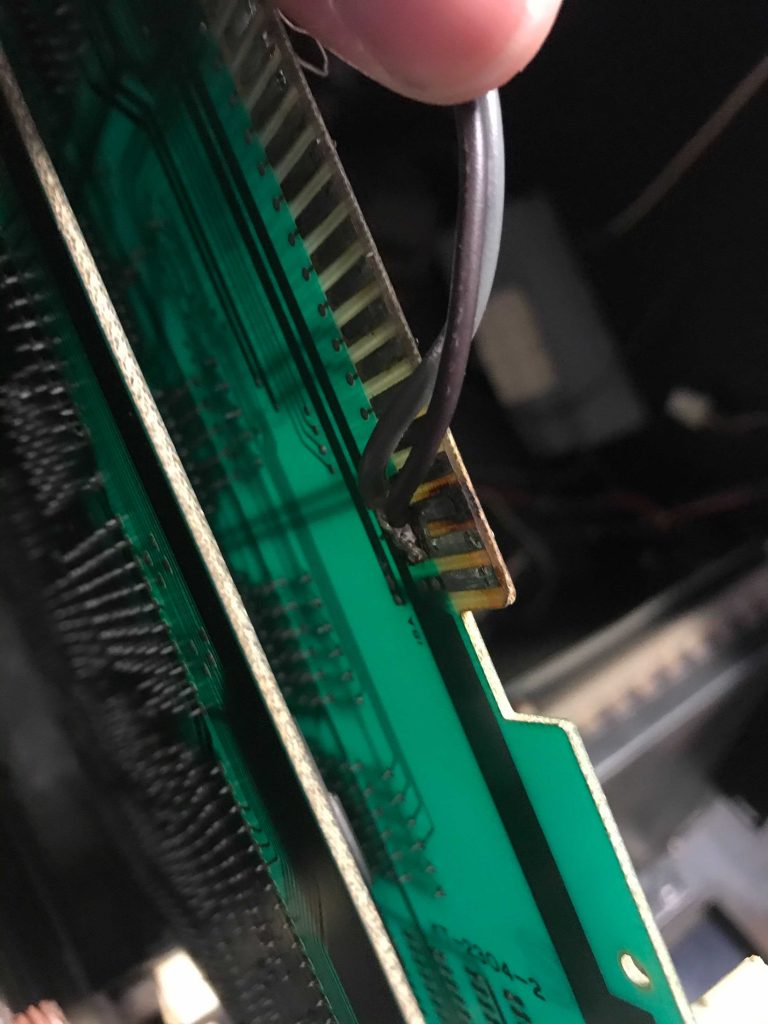 Once we had the power supply working we tested the monitor and realized we had the wrong chassis and swapped that quickly and it worked! The PCB was solid despite the two wires soldered to the edge connectors, wondering if we might want to do some pro-active repair on that one. Also. the monitor with the chassis Buffet repaired was crisp, and the controls worked. It was  so cool to see this game finally working. The last bit, which was testing Tim’s patience, was the monitor had to be removed from the metal harness securing it and rotated 180degrees given there was not room in the cabinet for its current configuration, and those bolts can be stubborn. But, in the end, he got it flipped and installed it on the glass and the game works as it should. I really enjoy shadowing Tim as he does these repairs. He is getting damn good at them, and while they can be trying at times, we have all but two of our 65 video games working, which is downright amazing. And when I get back to Reclaim Arcade we are shipping out the Space Invaders to deal with that monitor collapse and the Mouse trap should be something Buffet can fix, which means we will be pushing towards a temporary state of perfection yet again 🙂

Fixing these things was part of the bargain, and it should be no surprise to anyone that Tim has not only met, but exceeded, his end of the deal. So good.

I think that’s it, and that is just me preparing for the inevitable next fix, but in fact our backroom is stocked with spare PCB boards and an assortment of parts which means we have been in pretty awesome shape. I will be making a run with 10-15 PCB boards for repair, which will continue to keep us honest, and I can say with some assurance we are going into the Summer and our near future plans for expansion in the proverbial catbird seat.

Boards to be repaired as of now:

*We also look at the games I bought for the bavacade, but will save what we found there for a different post, but Tim will be brining at least 3 of 4 of the games I got to a Retro Expo in Fredericksburg next weekend, and we wanted to get out ahead of that making sure they work and that everything was on free play. Short story there, Pac-man, Joust, and Defender looked good, but Galaxian was having monitor issues, so that is a coming project.

†Tim originally attached a G07 chassis to the Wells Gardner 4900 tube to no avail, there was horizontal screen collapse, but once he realized that and swapped out for a WG 4900 we were in business.