Just over two years ago I wrote about spinning up a work experiment called Reclaim Radio using Azuracast. We used it irregularly and eventually it died on the vine a bit, especially given I was so used to broadcasting through ds106radio by default. But recently Lauren Hanks has been exploring ways of keeping our fully remote team connected in some fun ways, and there was mention of a weekly radio day where folks would create the soundtrack for others on that day. There are probably a million ways to do this, but given it is container month at Reclaim Edtech (have a mentioned that recently?), I decided to jump back into Azuracast and get Reclaim Radio back up and running.

A lot has changed in Azuracast in the last two years given it’s vigorously developed and supported, so I made the executive decision to delete the previous instance and start from scratch. This was possible because there were next to no files uploaded to the server. We do have a one-click installer on Reclaim Cloud for Azuracast—and that is ultimately what I ended up using*—but you could also install within Docker Engine using the guide here or explore the custom image on Docker Hub, which I haven’t had luck with.

Anyway, it’s been a while since I started from scratch, and one of the changes is that you can get an SSL certificate from within the web interface, which is nice. The other that threw me off was that by default AutoDJ won’t spin up unless it has something to play…you need to give it a single default track to loop through and that will satisfy that requirement and make sure everything spins up. This had me stumped for a bit, but a trip over to the Azuracast Discord for help solved this one, grazie Buster!

So, after that it was smooth sailing and I had Reclaim Radio up and the custom listen page working cleanly given the domain remained the same. The crazy piece there is that I stole the homepage for our listen/player form Taylor Jadin two years ago, and two years later he’s not only working for Reclaim, but running the Container workshop this month #4life. So, after getting it running I needed to test my simulcasting to two stations using Audio Hijack, and that worked quite well:

If anyone is interested I can break down what you see above in more detail, but quite simply I am running my microphone, Google Chrome, and my turntable (USB Audio Codec), through two broadcast blocks, namely Reclaim Radio and ds106radio, before it records the audio, which I am monitoring through the audio jack in my Elgato Wave microphone. Getting this working was rewarding, and I soon after did a late night broadcast wherein I looped in a third stream, namely a #vinylcam cast through bava.tv so you could both see and hear the record spinning 🙂

That was fun, and the following day in the water cooler Slack channel for Reclaim Pilot Irwin shared some music they are listening to, and that got me super excited about Reclaim Radio, so during the edtech meeting that morning we played with the WebDJ feature of Azuracast, something I have not had luck with previously, but this time it worked. 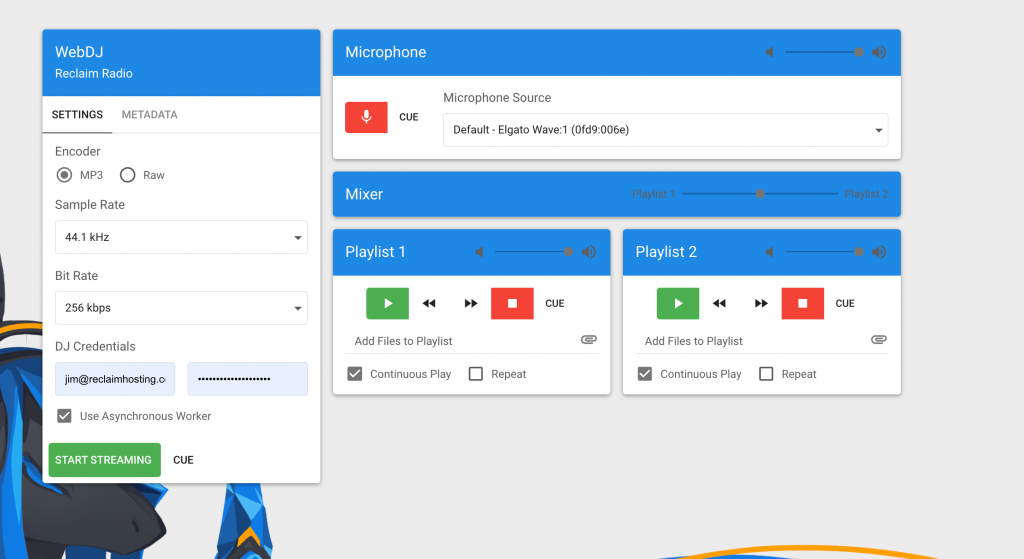 The great Scottlo was/is a fan of the WebDJ given it eliminates a ton of overhead to getting online and broadcasting with apps like Ladiocast, Audio Hijack, Mixxx, etc. All you need are credentials and a mic and you can start uploading songs to playlists and mixing in music and with your audio. And thinking through this yesterday in the edtech meeting, with a tool like Loopback that virtualizes a microphone so you can mix together several applications, you could then use that virtual mic in WebDJ to broadcast Skype calls, Zoom meetings, and just about any other app on your computer you can think of. I am pretty excited about this, and hopefully it will become a regular thing at Reclaim. But if nothing else, it’s always valuable for me to spend time getting comfortable with the ins and outs of Azuracast given ds106radio isn’t going anywhere anytime soon.

*It throws an error during installation that might make you think it did not install correctly, but it did. We do have to fix that.