I’m gonna try and break my posts about the grand opening of Reclaim Arcade up a bit given there’s so much to say one post would just be too imposing and never get written. 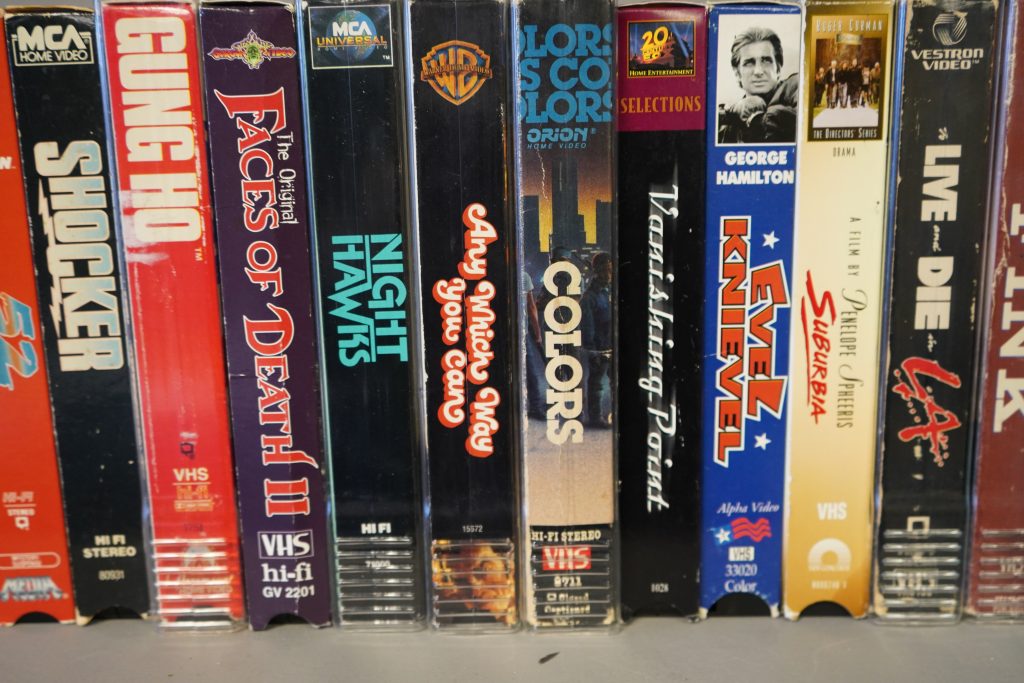 It’s a pretty curated, eclectic collection of VHS and beta tapes I like, and given we needed more desk space for check-ins and merch, we had to box-up close to half the collection, which is stored in the bursting back closet. I decided to cull predominantly 90s films given that was a fairly easy way to cut the collection in half. What’s more, we can use them eventually when we build a 1990s themed arcade that will have to recognize the horrific fate of video rental stores with the onset of the the Blockbuster cancer. I really can’t get behind the current excitement around the whole “last Blockbuster,” I would rather celebrate the long overdue death of the last Blockbuster. That chain was a scourge on mom and pop video stores around the world, much like Facebook and Twitter were (and are) a blight on the blogosphere—none of it was inevitable, it’s just laziness dressed-up as convenience and community.

Anyway, I digress. What I really wanted to talk about were a few of the details in Reclaim Video that I really enjoyed. First up is the Gyruss Cocktail cabinet that is one of two cabinets we bought that never worked. This one was used for parts for our stand-up Gyruss, and it may see life again some time in the future, but for now we needed somewhere to put the 27″ JVC TV in Reclaim Video. Yeah, what’s a video store without a constantly playing video? I mean that’s why I wanted to work at one in the first place, the prospect of watching actual movies while working was everything (another tradition of the small video store Blockbuster killed, for them it was simply an endless ad running non-stop). I like the way the Gyruss cocktail links to the arcade, yet at the same time it’s literally supporting the video store, which in effect is what is also happening figuratively. Reclaim Arcade inspired new life into Reclaim Video, and for that I am really thankful because without the arcade Reclaim Video would have inevitably slipped into oblivion with me on the other side of the Atlantic.

Been a blast keeping the videos playing in @reclaimvideo for our ?@ReclaimArcade? patrons because everyone needs a little VHS in their life pic.twitter.com/y7YvZxubRA

And during the first weekend the TV was on non-stop, we played The 7th Voyage of Sinbad, The Outsiders, Batmania, The Hitcher, Miracle Mile, The Warriors,  The Outlaw Josey Wales, Super Fuzz, and more.

Jennifer Jason Leigh you have a hold on me ?@reclaimvideo? pic.twitter.com/5Ucr6nkIYl

Also, one of our awesome employees Shane decided to dig into the 7-tape Beatles Anthology that Michael Berman sent us just a week or two before opening, and that made for a great watch over the first two weekends, we polished it off in the afternoon hours on Saturday and Sundays.

Thanks to ?@amichaelberman? we have the Beatles Anthology playing in @reclaimvideo on this snowy Sunday morning pic.twitter.com/0XDdMsElN8

So the Gyruss Cocktail cabinet as stand for the JVC TV which is running a fairly recent Sony stereo VHS player was a huge win. You can also see in the image below of The Shining and a WWF Saturday Morning cartoon that there are rabbit ears on the VHS player. Those are not simply decorative.

The inimitable ?@reclaimvideo? picking up morning cartoons and afternoon horror via the rabbit ears while ?@timmmmyboy? does an interview about ?@ReclaimArcade? The Blonder Tongue RF modulator tip from ?@mediarchaeology? worked a treat pic.twitter.com/mQdF00I5nw

Based on a Tweet from the inimitable MediaArchaeology Lab at University of Colorado, Boulder, I got a good tip on using a Blonder Tongue RF Modulator to push out video over a VHF frequency locally.

oh hey wanna see my twitter feed on old TVs thanks to VHF over air transmission? you know, what @rose_alibi and I do in the @mediarchaeology on a Friday afternoon— pic.twitter.com/xIs6NFHzlt

We are doing this using Plex and a Raspberry Pi that we had in Reclaim Video previously, but now it is wirelessly broadcasting from two store fronts down in the Reclaim TV Studio. 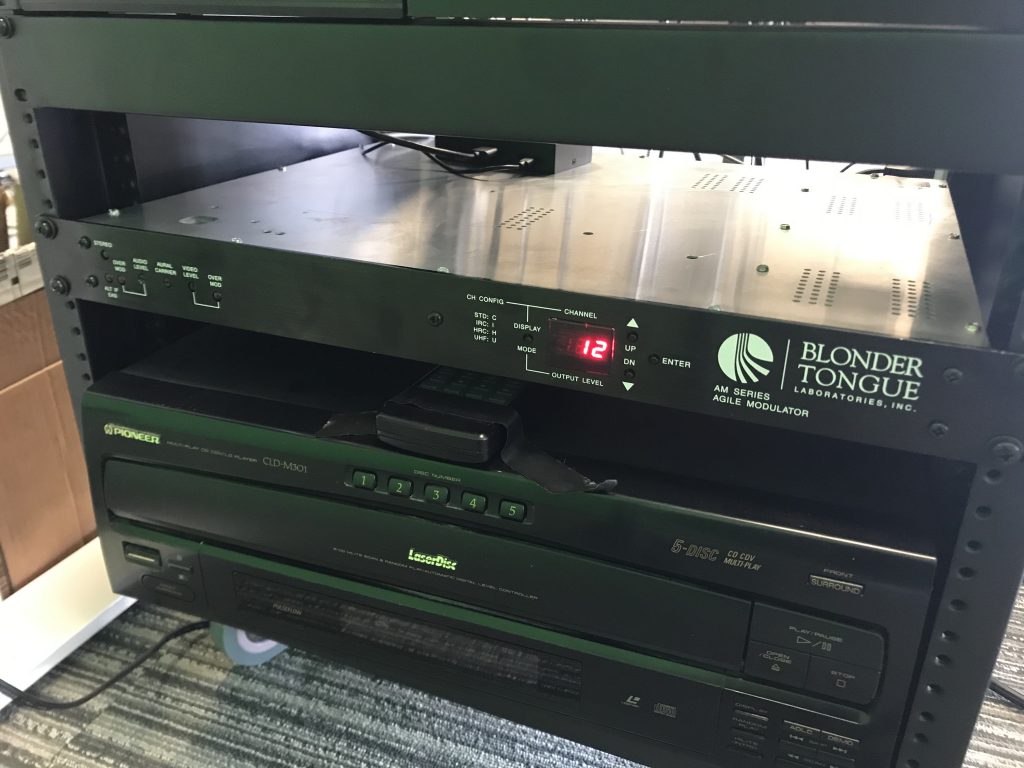 It is broadcasting to channel 12, which means we can pick up anything pushed from the Raspberry Pi to the RF Modulator on that channel, it is pretty cool, and allows us to re-visit the brilliant work Michael Branson Smith did at the UMW Console Living room in the Spring of 2015. What’s more, this means channel 12 of the TV in the living room can also pickup the signal, and we used a strange looking antenna shaped as a white box to get that channel 12 over the air. 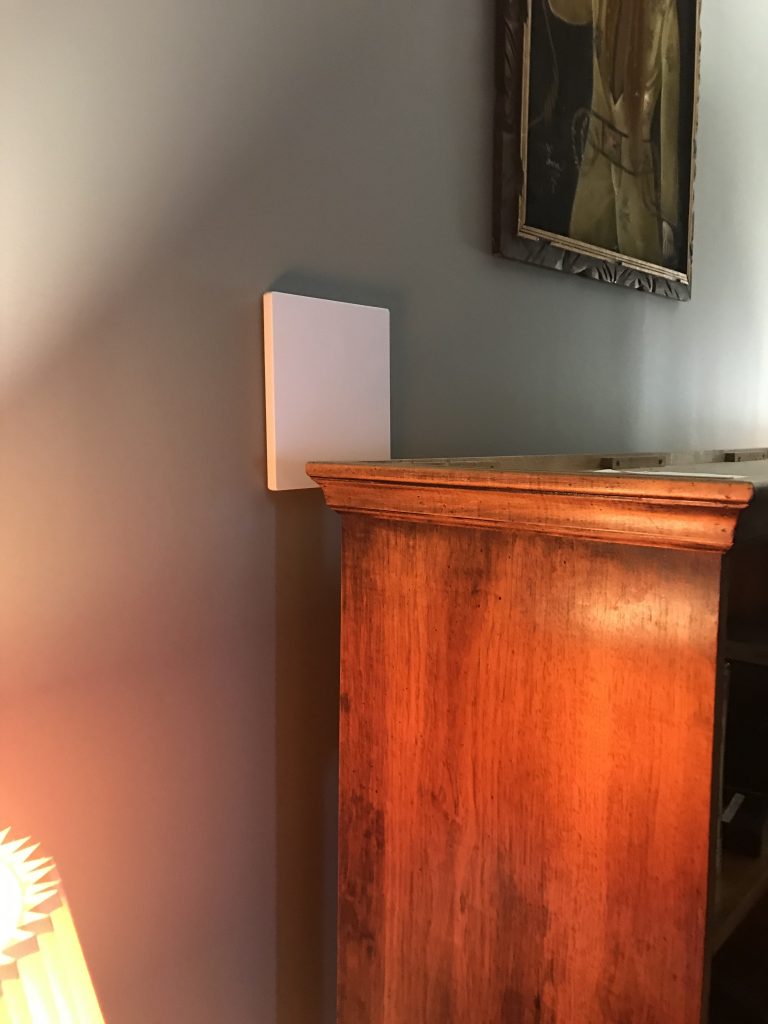 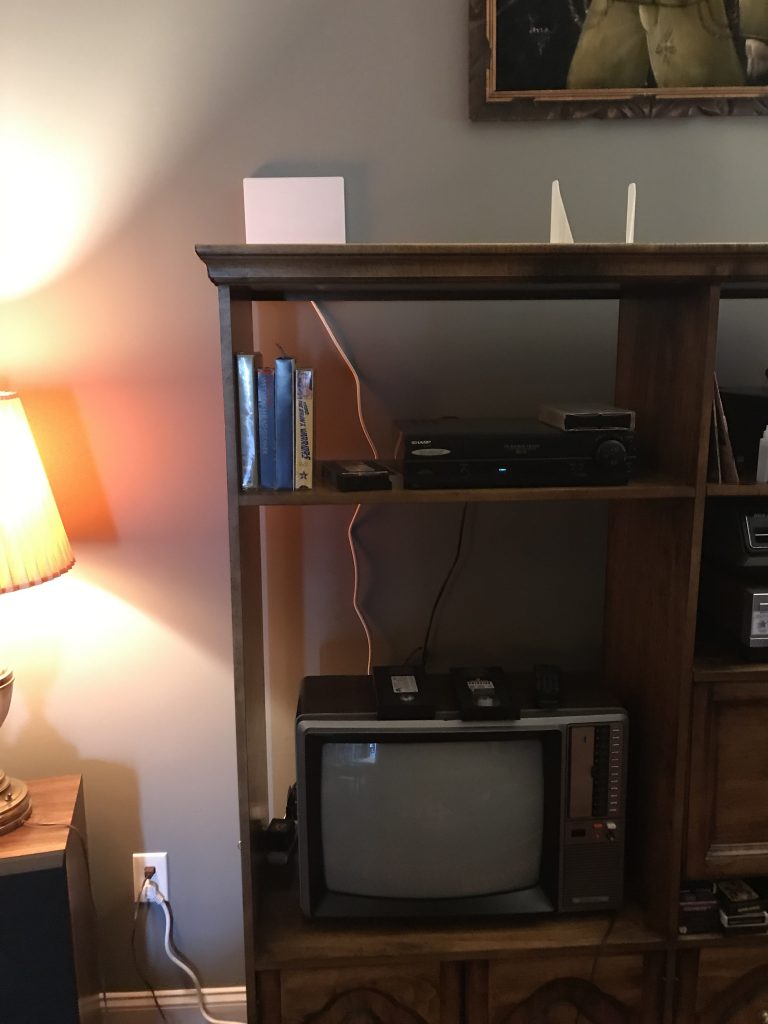 I want to get at least 2 or 3 more RF modulators, but Tim might be right that it is over kill. But I would love the idea of folks figured out there were 3  or 4 full days of programming running one the living room TV on channel 2, 4, and 7 (which would have been CBS, NBC, and ABC for me growing up on Long Island in the late 70s and early 80s).  One can dream, right?

The “Now Showing” and “Coming Soon” posters really wrote themselves for the front window @reclaimvideo in anticipation of the the grand opening of ?@ReclaimArcade? pic.twitter.com/30c5mL3PBP

And finally is the pretty obvious joke on opening Reclaim Arcade during a pandemic, the Now Showing Contagion poster in the front window, which has the Coming Soon complement of Outbreak on the other side which you can see once you enter the store. I thought more folks would pickup on it, but just a few commented, but I like those little stupid details, they make me happy!

Got the Videodrome poster in @ReclaimVideo and the Creepshow 2 poster in @reclaimarcadeI some proper, color-coordinated frames pic.twitter.com/q66BL88ZWz

Another thing about Reclaim Video is I am getting some of our posters so badass frames. For example, we got back our framed posters of Videodrome and Creepshow 2, and they look quite gorgeous. I originally got the Videodrome poster for the UMW Console back in 2015, and the Creepshow 2 poster is an original from the 80s I had as an adolescent, so that one is kinda special. In fact, Creepshow 2 is actually hanging in the arcade, not Reclaim Video, which is all part of trying to link the various spaces, although it’s not that hard in the end, I just love the details and I have developed a frame fetish. 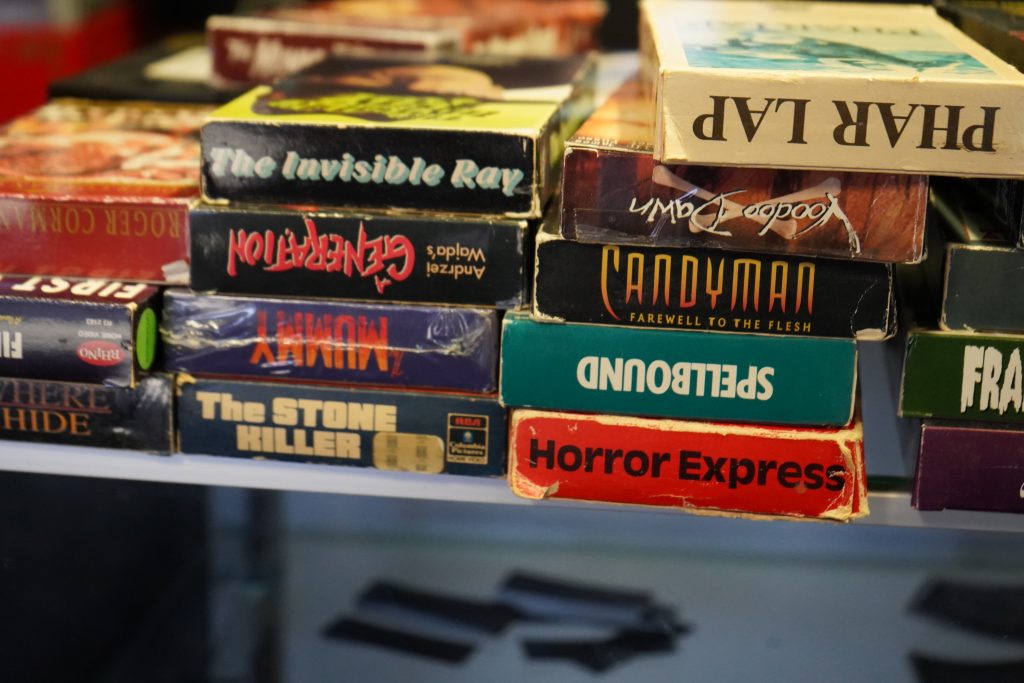 There is much more to talk about, like the 60+ videos I got from a collector that I plan on doing monthly VHS hauling videos about, as well as the tub someone dropped off filled with 100+ tapes and a working VHS player.  The riches! You can now see why I have to break these posts up, don’t you? Suffice to say, Reclaim Video is not only back, but arguably better than ever. It makes for a gorgeous entry to the Arcade experience, and it allows me to continue collecting and watching these anachronistic gems from a time gone by. Long live Reclaim! 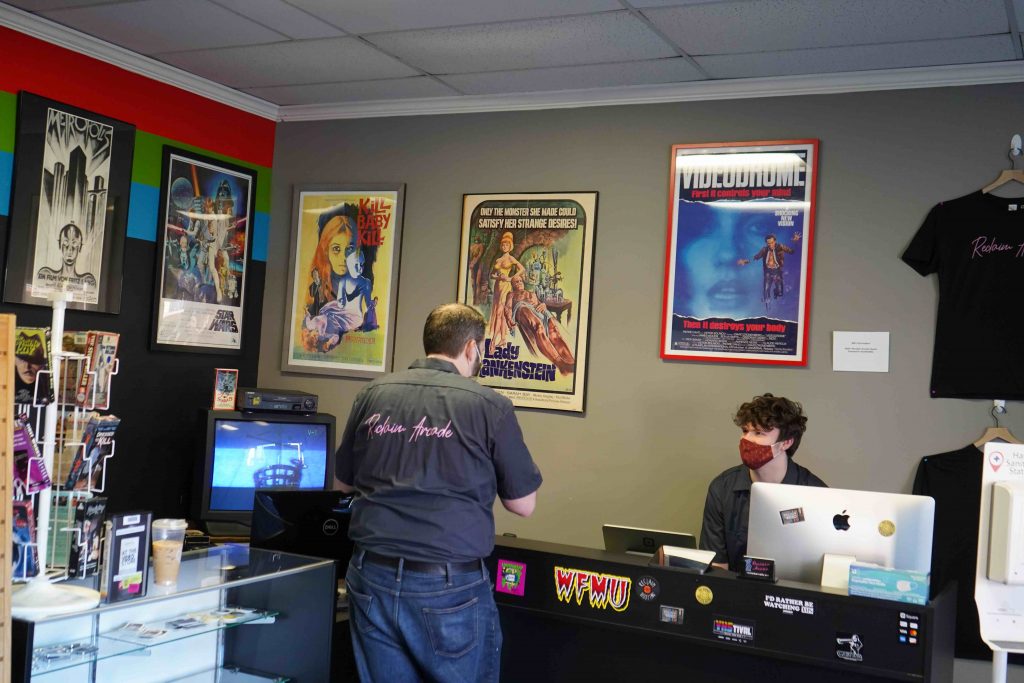