I’m on a bit of a roll capturing some reflections of a recent trip back to the US to open Reclaim Arcade. You can read more about getting the Arcade open in this post or, if outdated media formats is your thing, I wrote a bit about the arcade entry point which is a 1980s VHS rental store in this post. This post will be about another space in Reclaim Arcade, the 1980s living room.

The living room in the arcade is a direct descendent from the UMW Console Living Room Zach Whalen and I created back in the Spring of 2015. None of the furniture was re-used from UMW (I picked most of this furniture up either on Facebook or at a second hand furniture store in Fredericksburg for a grand total of $300), but a ton of the technology was re-used. The Emerson 19″ TV, the Sanyo Betamax, the Fisher component stereo system, the RCA Selectavision, the Atari 2600, and many other pieces that were collecting dust in a storage unit. So Tim had the brilliant idea to re-create the living room as part of the arcade experience over a year ago, and during my trip back in November of 2020 I completed the revival of the living room, and I must say it looks pretty awesome. 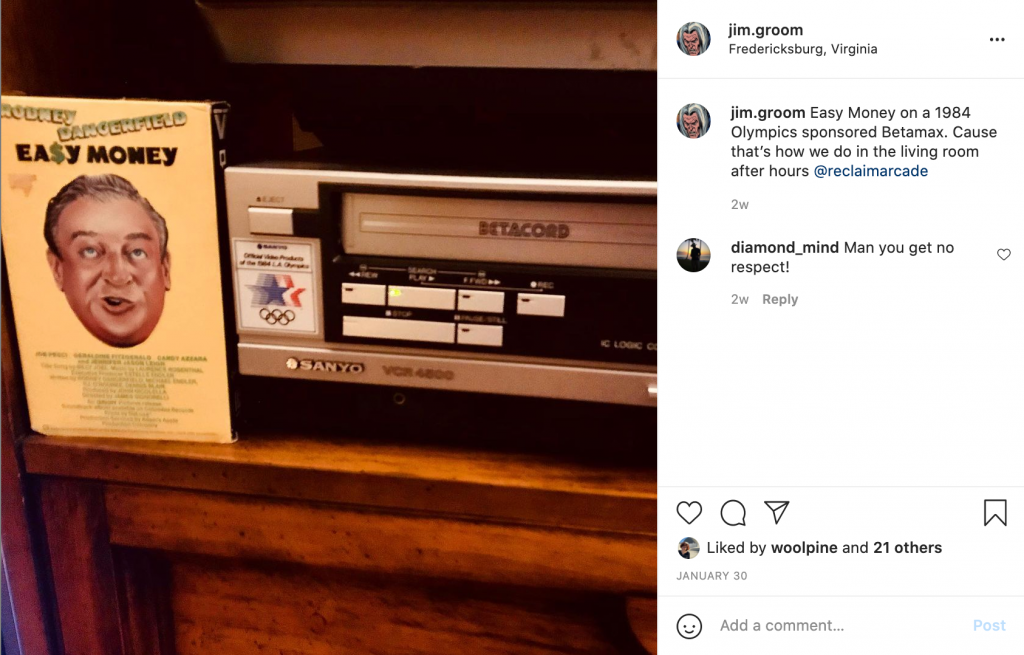 I even printed out more vinyl/laserdisc wall-holder mounts to create a wall of laserdiscs above our  2000+ laserdisc collection, which in many ways is much more at home in the living room than in the video rental store because laserdisc rentals were few and far between. Those cinephiles who had the money for laserdiscs often bought them at places like Tower Records rather than renting them at video stores given they were a niche product. The fact they were more likely to be owned by collectors might account for the excellent condition of almost all of our laserdiscs. 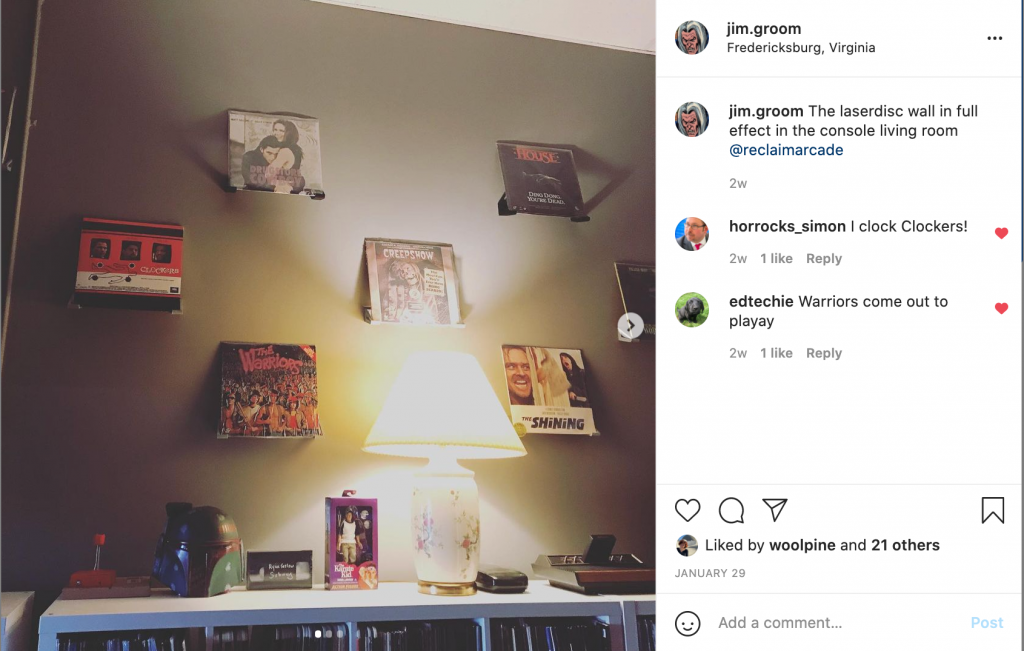 I heard on many occasions folks asking us about our large vinyl collection to see if they were for sale, when they were, in fact, referring to our laserdiscs. Our vinyl collection in the living room is paltry at best, but our laserdisc collection is pretty rocking. I spent an evening actually organizing the laserdiscs into the categories of desirables and undesirables, the movies I want to highlight are all in the top 24 1′ x 1′ squares, and the duplicates and run-of-the-mill films are in the bottom 24. It’s not organized in any other way yet,  save that I isolated our burgeoning karaoke collection. You can also see from the image above that the top of the laserdisc storage area is a showcase for toys, dolls, random VHS paraphernalia and our backup Atari 2600 console, which Tim soldered the split RCA wire back together and it worked beautifully—which was pretty cool. You can also see one of our many VHS rewinder units if you look close enough 🙂

It's a laserdisc night tonight in the living room, all sorts of treasures in @reclaimvideo And some still say laserdisc digital audio is without equal 🙂 pic.twitter.com/pEom492JNY

I had some fun playing with the laserdiscs, and our AV setup allows us to run the laserdisc audio (as well as the VHS and Betamax audio) through the over-sized Fisher speakers that bookend the living room entertainment center. Laserdisc audio is pretty awesome, and we have a fairly good collection of laserdisc music videos that are fun to play. I spent an evening doing just that lest the laserdiscs feel neglected given all the regular VHS love they overhear in Reclaim Video.

Might have to play this on Sunday. Brady probably won the Super Bowl when this was made ?@reclaimvideo? ?@ReclaimArcade? pic.twitter.com/UaWDiMgCf6

I even unearthed some NFL Films laserdiscs, which gave me an idea for the OERxDomains21 conference I’m helping organize this coming April, so that was fun. Plus it was timely given the Super Bowl was just a few short days away, and Tom Brady won it again—which helped me feel young.

The glow is strong with this one pic.twitter.com/WaXHlMelxw

I do love the oddities of some of this older media, like the fact that many of the music video laserdiscs only occupy one side of the disc, so if you put it in the wrong way you get a message something like the one featured above. You can almost feel the glow off the CRT on this one, and there is no question how much an upgrade the quality of laserdisc video is over VHS and Beta.

Another highlight during my time in the living room was sharing more information about the RCA Selectavision with anyone that would listen. I’m intrigued by this format to no end, it uses “a special needle and high-density groove system similar to phonograph records” to playback video discs. Basically vinyl for movies, and it was a total flop because if you so much as touched the disc it would skip and effectively become unusable. The limits of this format are apparent on just about every videodisc we have, and we have about 70-80, but I still love to watch them, if only for the unique visual and audio glitches. I watched The Love Bug, First Blood, and The Eyes of Laura Mars, which I discovered was mistakenly housed in the Godfather Part 1 videodisc holder. It’s effectively impossible to know what disc is in what holder until you play the disc, so there’s that—which is another oddity I love about this format. The covers are truly like protective turtle shells that prevent you from ever actually seeing the disc given how fragile they are—a failed design through-and-through.

But I think my favorite part of the living room was hanging out there during the arcade’s off-hours. I watched The Slumber Party Massacre and Slam Dance during the evenings of the working-week to get my VHS fix, and that was a blast. But most days I simply setup shop in the living room and dis my day job at Reclaim Hosting from the comfort of our faux wood veneer 80s furniture. The living room is comforting to me on an almost primal level; I have fantasies about being buried underneath the coffee table in a glass coffin should I come to an untimely end—is that strange? 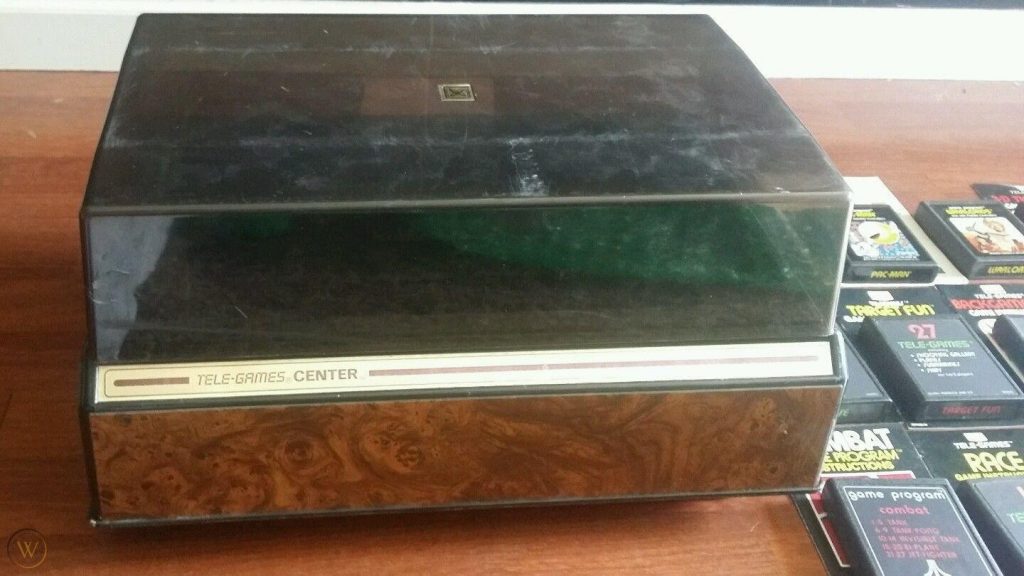 Anyway, there is still more goodies to come. I recently purchased an Atari 2600 storage container, as well as an Atari 2600 Video Game Brain that allows you to switch between 6 cartridges without ever removing a game 🙂 Oh yeah, I just remembered I also picked up an Atari 7800 with quite a few 7800 games, as well as a load of 2600 games given the 7800 console was the first backward compatible gaming console, which is also pretty cool. 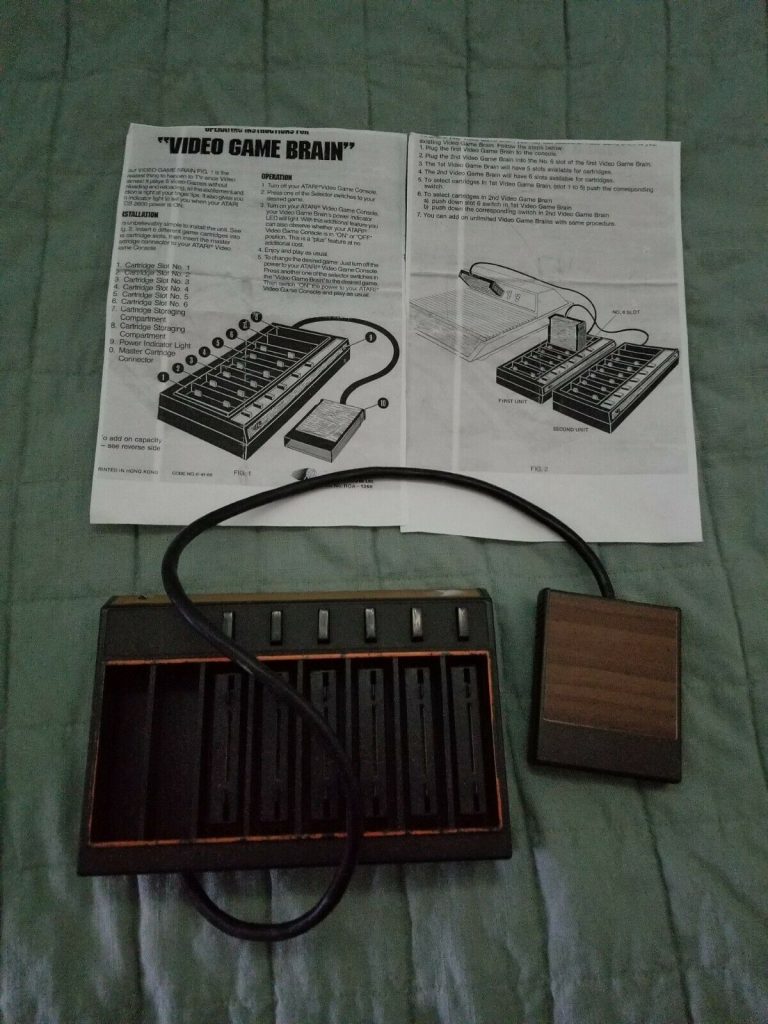 Video Game Brain for the Atari 2600

There was even some suggestions on Twitter for paneling on the wall, which would be the perfect finishing touch, but I’m not gonna lie—I’m shot, and I am sure Tim is doubly so. We resurrected the arcade from what seemed a certain death when COVID ruined most of the world’s best laid plans, and that happened in 4 short months. It’s amazing that it looks as good as it does. Luckily we’ve accumulated so much stuff in our office over the past 4 years, and we’ve been joking while getting the space ready that nothing we’ve gotten has gone to waste. And nowhere has that proven truer than with the arcade games, but more on those in my next post.

You're place would look pretty sweet with some wood paneling, and a fire pole… pic.twitter.com/j3lckW0njl