Reclaim Arcade: Some Notes on the First Few Weeks 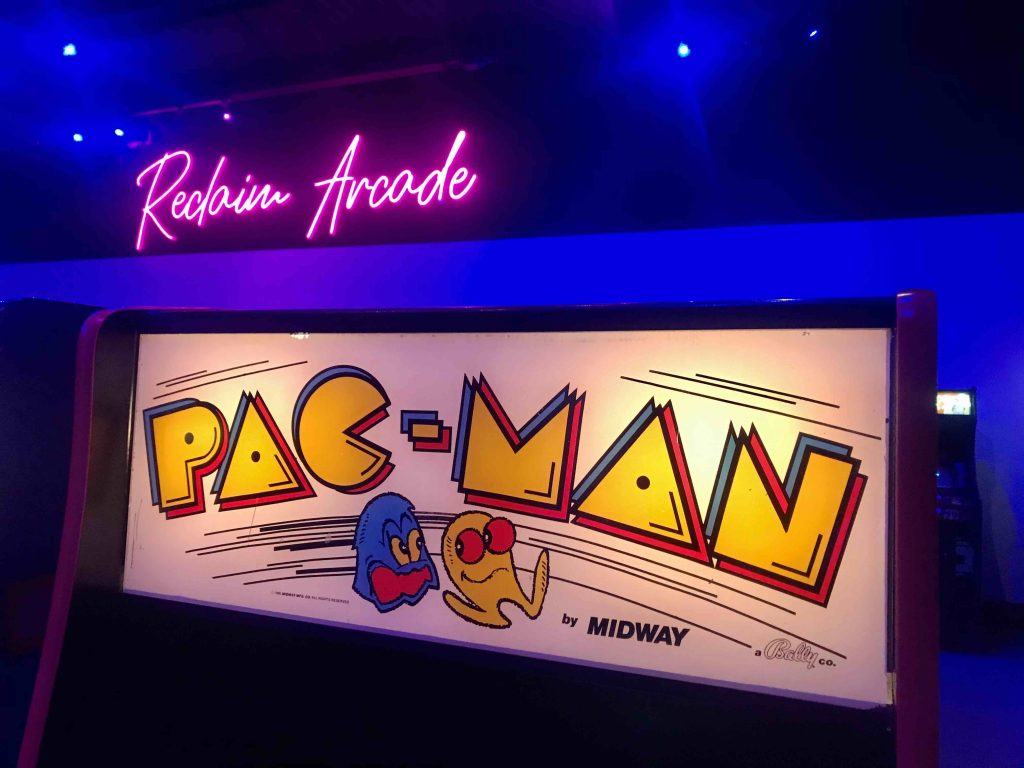 The Reclaim Arcade reviews are coming in!

Last weekend made it three weeks that Reclaim Arcade has been open to the public, and it has been pretty rewarding to have folks appreciating the space and all the thought and detail that went into it. It’s a space that has been in development for more than 4 years now, even if we didn’t know exactly what we were building towards when we started.*  We opened on January 29th, with a sneak preview for friends and colleagues on the 28th, which was the first real taste of how cool it was to have folks in the arcade actually playing the games and enjoying the “awesome vibe.”

The above images highlight scenes from the soft opening wherein we tried to get a sense of what we might have missed in terms of details. It is one thing to imagine an arcade, it’s another to actually run one, and inevitably you will forget things. Turns out we didn’t miss too much, that said we did need a coat rack given it’s winter and folks had nowhere to hang their jackets. The other thing we still need is a slop sink for the mop, but we are working on that. Besides that, I can’t think of too many things we missed, which is truly a testament to Tim’s remarkable ability to both create and operationalize the vision. The opening weekend went quite smoothly, save the fact that we got the first of 3 consecutive snow/ice storms over our first three weekends of being open. The weather gods were not with us.

*Winter Weather Advisory* We are OPEN today from 10-9pm and have snow removal services clearing our parking lot at regular intervals. We are also happy to rebook or refund any customers that aren’t able to make it out today and want to enjoy the arcade at a later date. pic.twitter.com/fKbl6sEsdY

We did have a few last minute cancellations in an otherwise booked-out opening weekend, and we were able to lean on some of our customer support experience at Reclaim Hosting to ensure folks were well taken care of by providing refunds or coupon codes to reschedule a visit at their earliest convenience. Almost everyone took us up on the coupon codes or simply chose to reschedule for an upcoming date, which was cool to see. Probably the coolest thing was to see how quick and able our two hires were at running the space by themselves. One of the things Tim and I wanted to get a sense of right away was how much would the daily operations depend on us being there. As of right now we are only open 3 days a week: Friday from 4 PM to 12 AM; Saturday from 10 AM to 12 AM; and Sunday from 10 AM until 9 PM. What’s more, we have the schedule organized in two hour blocks limited to 20 people with an hour in-between sessions so that we can do a deep cleaning. A few questions we had were:

Those are a few of the questions that we could not answer until we actually opened, and it feels so good to be open! Tim and I make for pretty good partners, and the fun part about Reclaim Arcade is that it is so different from everything else we’ve done together.

I am really proud of what @timmmmyboy and I have been able to accomplish together these last 10 years, and @reclaimarcade is not only art, it's also highly functional as we learned this weekend. #4life pic.twitter.com/kRSVfhWMt1

We’ve had great success with Reclaim Hosting, and a lot of that was tied up with our incredible edtech network. But the arcade is a different beast all together—no one in edtech really cares all that much about an 80s arcade in Fredericksburg, which is entirely understandable. Reclaim Arcade is hyper-local in ways Reclaim Hosting never was, or could have been. It’s also first and foremost a material venture: the main attractions are by-and-large 40 year old cabinets that need constant TLC, so there’s very little that is virtual about this experience, at least so far.

Moon Patrol arrived today, and it is a mint game. It could have been made yesterday. We now have quite a collection of gorgeous Williams games all in a row @reclaimarcade (Defender not pictured) pic.twitter.com/jpQ98OkYyC

I think seeing folks react so favorably to what we built has been some great reward for the focused work we have put into building this space. And it has only gained momentum since opening weekend. We’re now seeing the coming weekends fill-up, and from all reports people are digging the arcade, which is the reason why we did it. So, while still early on, the arcade is already a smashing success in my mind. It can pay for the employees, the strip mall space, utilities, and at least part of our arcade game buying habit. Thankfully, it really only needed to cover one or two of those things—so we’re also feeling vindicated in terms of the arcade as an investment. Not necessarily financially, although also that, but in terms of an investment in Fredericksburg and the surrounding area, the idea that there is hope and possibility in a good, fun idea well-executed: our faith in the seed that was Reclaim Arcade is blooming in the winter of everyone else’s discontent 🙂 And you can’t do that without a local community supporting you, so thanks to everyone who has come out and shared the love!

On that note, it is worth noting that our Facebook page has been crucial to building awareness and support locally for the arcade. We recently passed the 2000 likes/follows threshold, and a lot of folks reference Facebook when letting us know how they discovered the arcade. I’m not a huge Facebook fan for all the reasons, but at the same time it’s hard to argue with its efficacy in this case. People find us there and then come, what’s more Facebook is also where we have found a fair number of old school games that populate the space, so I have had to try and come to terms with my Facebook demons when it comes to the arcade.

Finally, I posted it already, but the above Reclaim Today episode is a 20 minute reflection Tim and I did 10 days or so ago to capture some of our first impressions around opening and operating the arcade. My favorite part about the video is how damn happy we are talking about the arcade. I have more to talk about, in particular specific repairs we did, the evening we spent with Arcade Buffet, the TV antennae we setup, as well as the TV stand we improvised for Reclaim Video, which is amazing, and much more, but this post is already too long and rambling, so I’ll stop here, but know there is much more to come on the Reclaim Arcade front in every way!

*I have a separate post in the works about the metamorphosis of our little bit of strip mall in Fredericksburg since 2016, but that has proven quite an undertaking, but I’ll link back here once it is done. Blogging ain’t no job for the dilettante.

This entry was posted in Reclaim Arcade and tagged reclaimarcade, video games. Bookmark the permalink.

2 Responses to Reclaim Arcade: Some Notes on the First Few Weeks