Seems to me finding an Audrey Watters quote in a ed- tech focused presentation is as common as finding an image of cats. Her work as become synonymous with critical ed-tech, so when Whitney Kilgore suggested creating inspirational quotes based on her work—nothing seemed more natural. There have been some fun ones, but given Paul Bond has started up another instantiation of ds106, I figured I would take the quote prompt as an excuse to ump in the assignment and do one of my all-time favorite assignments: Troll Quotes (or the Triple Troll Quote). It’s dead simple, take a quote, assign it to someone else, and add a picture of a third person just to help feed the fake news ecosystem of the web 🙂 It’s so easy you can do it all in Preview or Microsoft Paint in seconds. 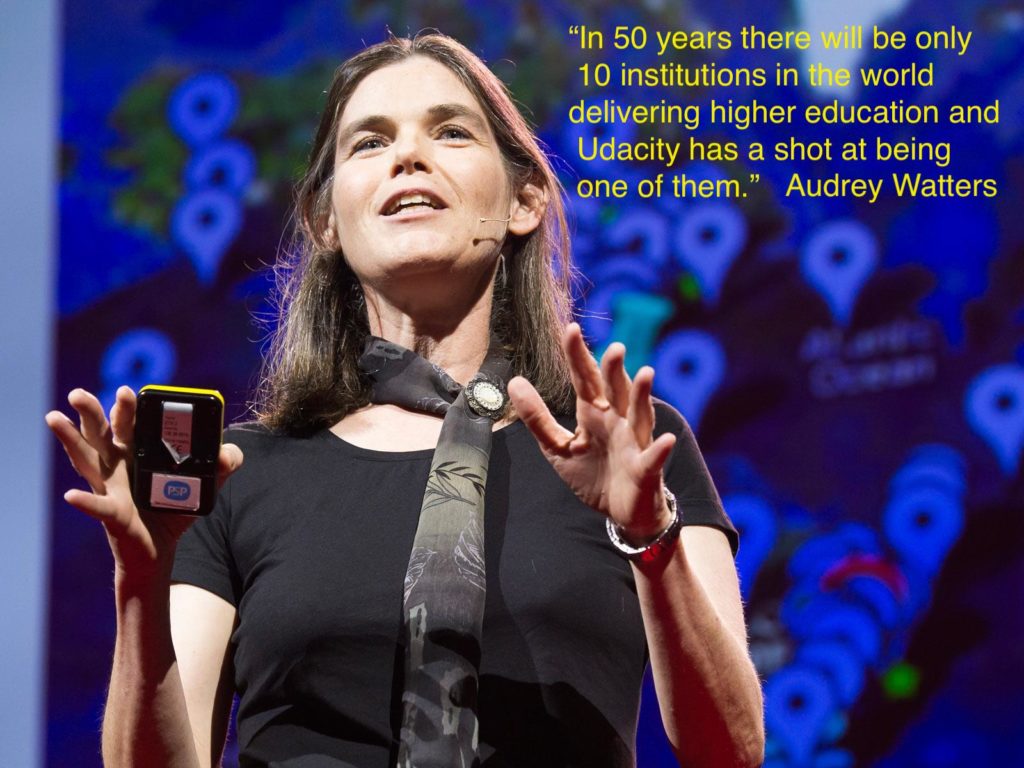 When I got the idea I knew the quote I would use, the 50 years 10 university quote from Sebastian Thrun that would make Audrey’s blood boil, and become that staple critique of  MOOC-mania, and by extension the Silicon Valley narrative, that was fairly rare in ed-tech. In fact, most folks where figuring out how they could jump on the MOOC gravy train in one way or another, but Audrey and Alan Levine did not let up, continually pointing out what a con the whole thing was. Which, I guess, explains the image of Daphne Koller, who founded  Coursera with Andrew Ng, a company that represented for much of higher ed the great disruption we’ve all been waiting for—and the degree to which money was spent, research time was devoted, and ink was shed for video lectures in a scalable LMS will never really add up for me—so much waste.

So anyway, thanks for the Monday morning diversion Whitney, and hopefully Audrey is a good sport about being conflated with the x-MOOC Mafia 🙂