The other day Shenandoah‘s editor, the great R.T. Smith (Rod), reached out to me about preparations for the Spring issue. It struck me then that we have been doing this since the Spring of 2011. Oh how six years flies by.  I track it time-wise in my mind right alongside the semester ds106 went open and online. Martha Burtis helped me code the design for the site, and while it might be high-time for a redesign, I think it’s held up quite well.* It was built on WordPress Multi-Site, and each issue has its own WordPress instance defined by issue issue and number, such as issue 65, volume 2, issue 66, volume 1, etc. The architecture was pretty simple. 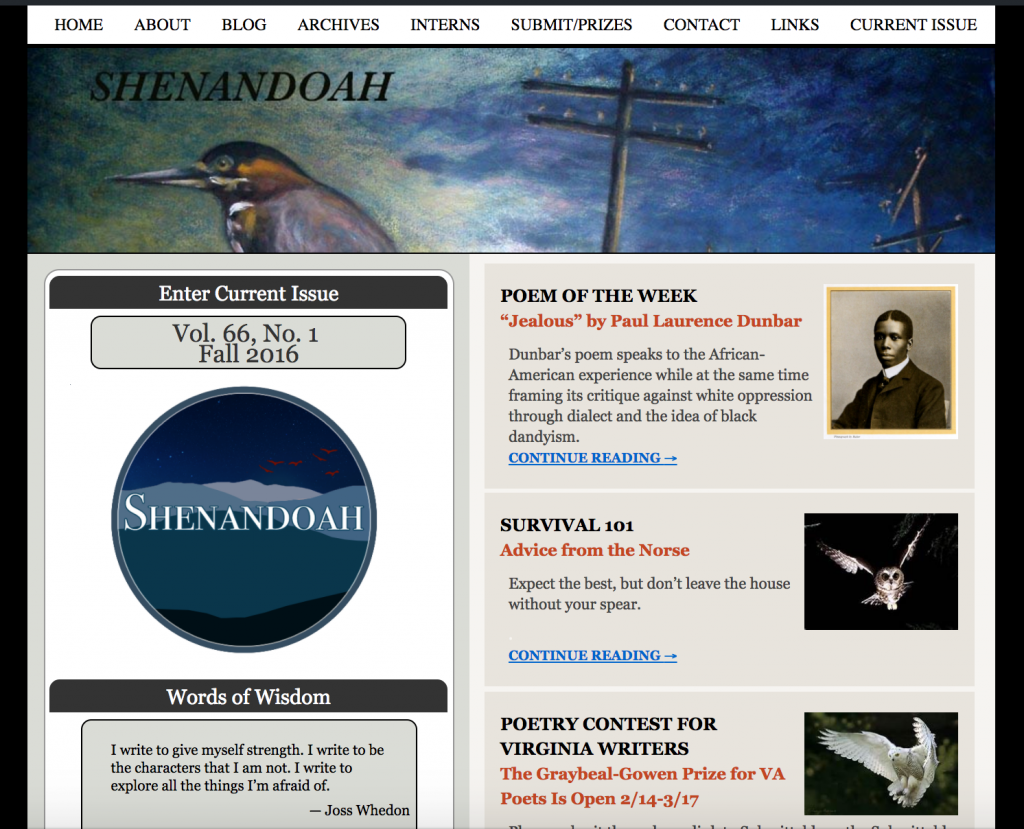 They also got rolling with a blog that has seen, on average, more than 5 posts a month for the last 6 years. Rod has become quite a blogger himself, and the move from print to digital for Shenandoah was quiet and consistent. They regularly produced new issues, blogged about the work, and made the literary offerings from the last 12 issues free and open to anyone with a browser. What’s more, every time I work on Shenandoah it makes me think of Claudia Emerson, the late poet and friend, who got me the gig thanks to the work I did with her literary journals class. Can’t think of too many better people or teachers I have ever met. The recent issue features a powerful reminder how many hearts Claudia lives in.

BEYOND AUTOBIOGRAPHY: Claudia Emerson Through Three Poems on Race

So my work for the Shenandoah gladly continues.  There will be a day when Rod retires and a new crew comes in and rethinks the site, but until then this is one of the projects I’ve been a part of over the last 6 years that has been truly grounding. I am no literary expert, but I like doing my small part to get a little more imaginative thinking and writing out on the web. 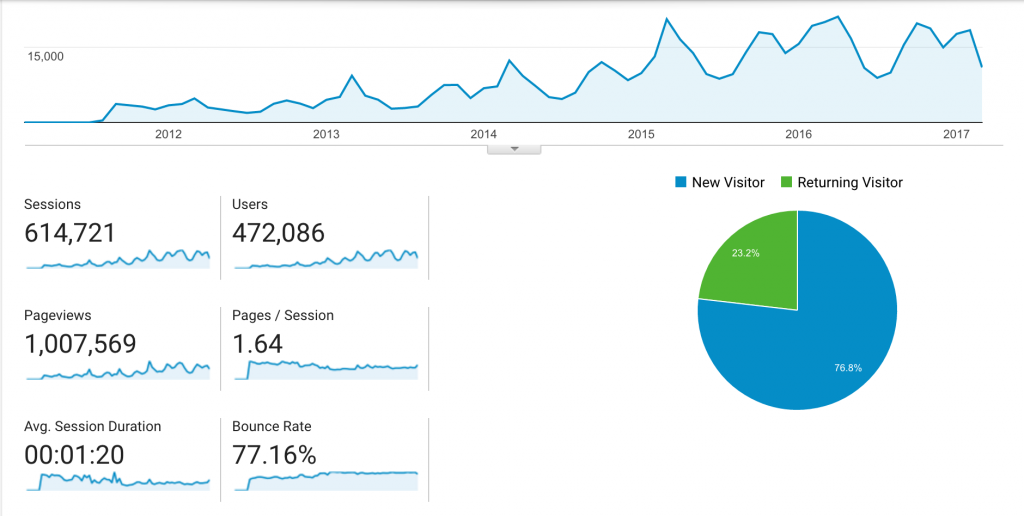 Anyway, after Rod reached out about the upcoming issue I realized this was the sixth year we’ve been doing this, so I got curious about the numbers. I’ve been tracking the site in Google Analytics since the beginning, and just two weeks ago the site hit the 1 million page view mark, with almost half a million visitors, and 600,000 sessions. What’s been most interesting to me about these numbers is the growth over the last two years to get almost 20,000 hits a month during the semester. That is 4x as many as in 2013, and twice as many during 2014. The last half of 2015, all of 2016, and the first few months of 2017 have suggested the journal has grown a pretty significant readership. That said, numbers on the web can be meaningless when you look at how many times Gangham Style was been viewed any given week. But Shenandoah abides, and twice a year you’ll get an outpouring of new literary work to the web, and that’s what I like about it.

This entry was posted in Shenandoah and tagged claudia emerson, shenandoah. Bookmark the permalink.