Tim unveiled his plans to restore a sourced Smash TV cabinet on the Reclaim Arcade blog earlier today, and he made the surprising point that Smash TV is our fourth Williams cabinet after Defender, Joust, and Make Trax. That led me down two separate paths: 1) memory lane to 1990 when I moved to Long Beach, California and my older brother and I would go to an arcade in Fountain Valley and play Smash TV. The other was a vague memory of Williams’ foray into laserdisc games in the early 80s, and that’s when I uncovered a true blast from the past: Star Rider.

This game is wild, and you can get a sense of the gameplay from the video above. The sit down cabinet extends into a motorcycle that you would mount and use to move the space bike on the screen. The background was generated using the laserdisc graphics that were far too complex for a computer of the time to generate, while the foreground overlaid computer graphics. The background visuals reminds me a lot of an early vision of No Man’s Sky:

The game also had a rearview mirror (which was a first) and characters from two other Williams games, Joust and Sinistar, appear fleetingly on occasion as Easter eggs. And while the stand-up cabinet also had the motorcycle steering wheel that pre-dates the more memorable Paperboy by a couple of years, the sit-down, rocket-powered motorcycle cabinet is a thing of beauty. 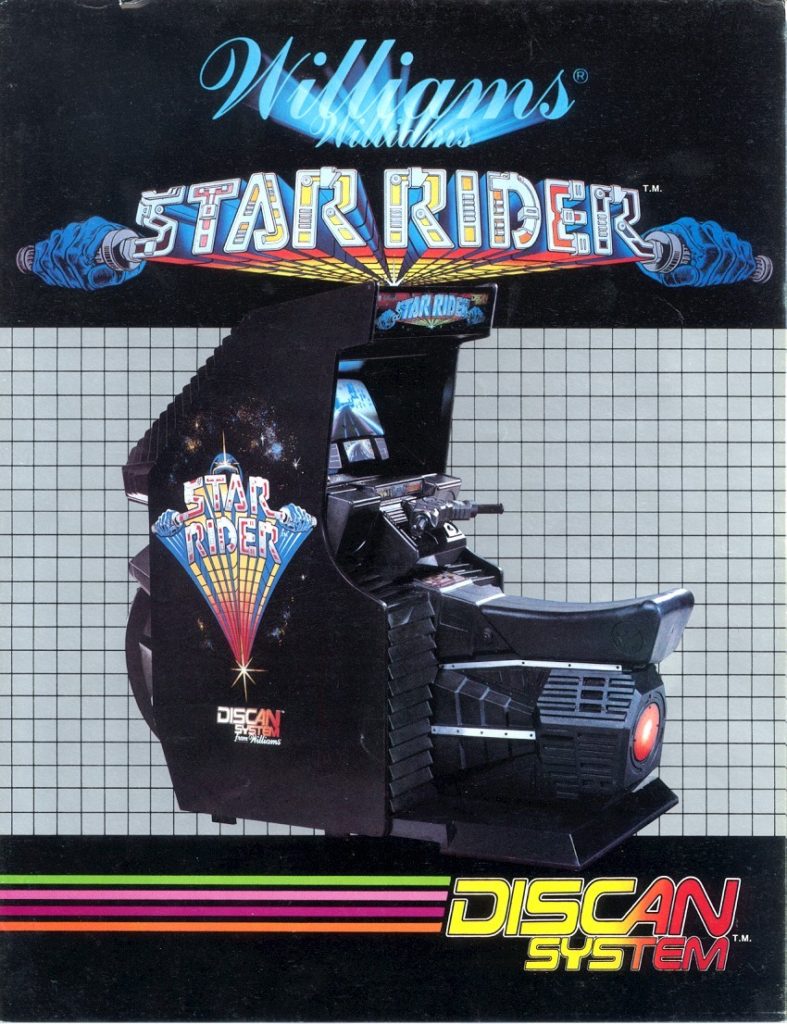 Reading up on it again, the game was hoping to “ride” on the popularity of the laserdisc sensation Dragon’s Lair, but the arcade market was already beginning to turn in 1983 and according to the Wikipedia article it was a “major dog” and resulted in or contributed to a loss of US $50 million[3] for Williams. That’s a big number!

The other hole this led me down was discovering Moon Patrol, another game I really enjoyed, was licensed for distributed by Williams for the U.S. market. I also now have a cool name for the scrolling that both Moon Patrol and Jungle Hunt pioneered in 1982:

Parallax scrolling! And the gameplay in the video has aged quite well, but a mint condition Moon Patrol is not cheap. And finally, looking at the Star Rider cabinet brought this video highlighting an insane collection of rare and prototype cabinets, more than a few of which I had never heard of.

Ok, now back to my day job.