Sunday in the Mountains 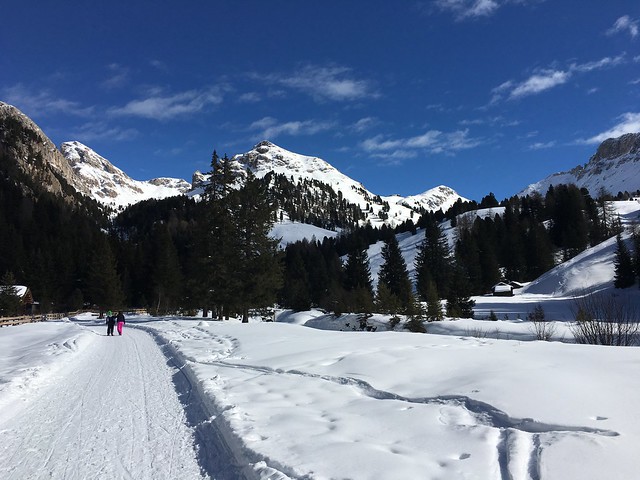 I’ve been in Italy with my family for almost 5 months now. The time has flown by, probably because we’ve been having a blast. I’m really starting to get settled into my life here. In fact, pretty soon it might be hard to get us out of here. Yesterday we went to Val di Funes in Alto Adige, which is part of the Trentino-Alto Adige region. The Alto Adige province is about 20 minutes north of Trento, and Funes is about an hour north. Alto Adige is also known as Sud Tyrol, which is what the Austrians and Germans refer to it as. It’s an interesting border zone of Italy because they predominantly speak German, although the residents are often fluent in both Italian and German. You’ll get a gross got before a buon giorno every time.  The history of the province is fascinating: it was part of the Austrian-Hungarian empire but became part of Italy after World War 1, during the rise of facism Italy did everything it could to suppress the speaking of the German language in the region (the irony!), but during World War II after 1943 when the Allies had taken the Southern part of Italy, the Third Reich annexed the entire region back into Germany, only to return it again to Italy when the War ended. Lotta ins and outs, a very complicated case. 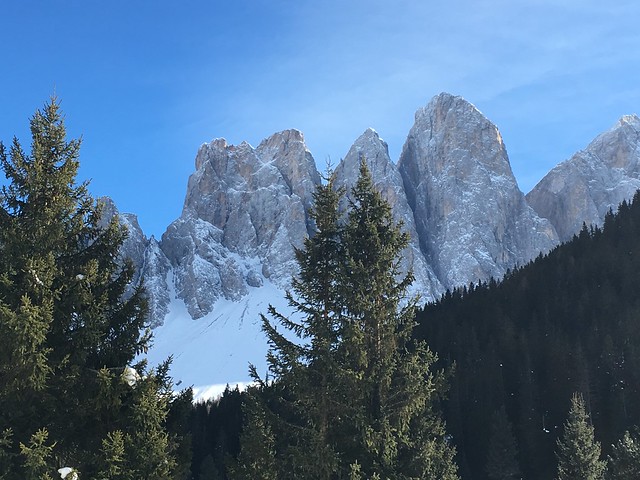 But we weren’t going to Alto Adige on a diplomatic mission, we were going to sled! Like Trentino, this province is famous for it’s mountains, and we headed to a group of Dolomiti mountains (a particular formation of mountains pictured above) called the Odle in Val di Funes. The spot was spectacular, and it caters to sledders which is fairly uncommon given the predominance of skiing. The trick was you had to hike up the mountain to sled down, no small task.

And I couldn’t help but play with the pano feature on the iPhone camera to try and capture and distort the natural beauty of the place:

We even took Daphne dog, who has proven to be a great companion on our hikes in the mountains. 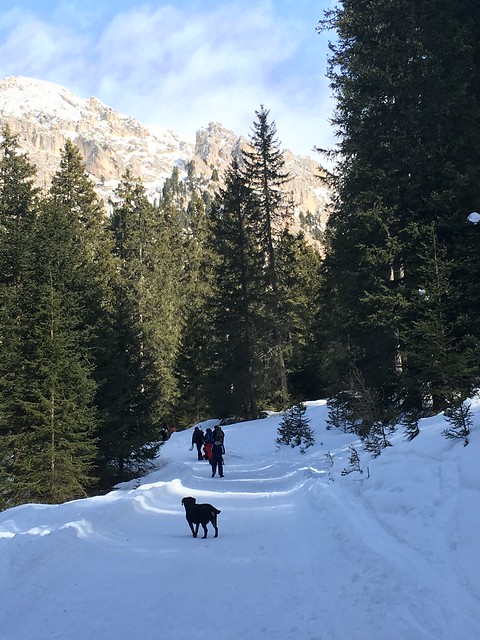 And once we got to the top, we had an awesome lunch at an Alpine hut—called a malga in Italian. 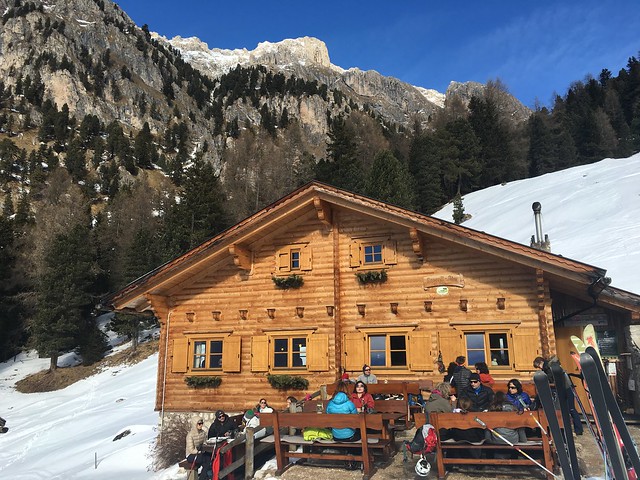 We got hot soups and sandwiches, and I highly recommend the canederli in brodo. It’s similar to Italian Matzoh Ball soup but with the  important difference that it is made with pork. 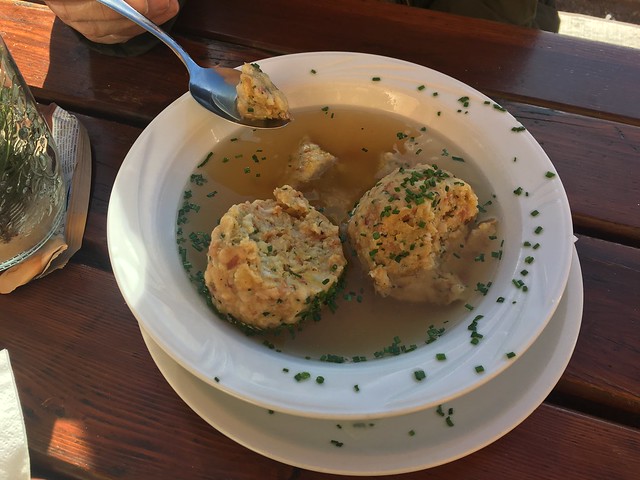 After we enjoyed our meal, the requisite coffee, and a bit of repose—we started down the mountain. We only had two sleds because the $5 rentals were all gone, so we had to improvise. We split the two sleds across the five older kids (there were seven in all) for the first leg of the trip down. Tommaso trekked down with me at least part of the way, but more on that shortly. In a rare moment of faith in my offspring, I let Miles use the iPhone to record his trip down for his friends in America. I produced a sped up and slightly edited version of the video and embedded it below. It gives you a sense of how long and wild the ride down is, and this was only the first of two separate sled runs that are part of this trip—the second was even crazier.

Tommaso was not thrilled that he was left behind, so half way down Anto asked a benevolent stranger on a sled if they would take him down a ways, which this awesome man gladly agreed to. His name was Alessandro, and he and Tommy became fast friends. They even took a selfie with a selfie-stick together when it was all over! 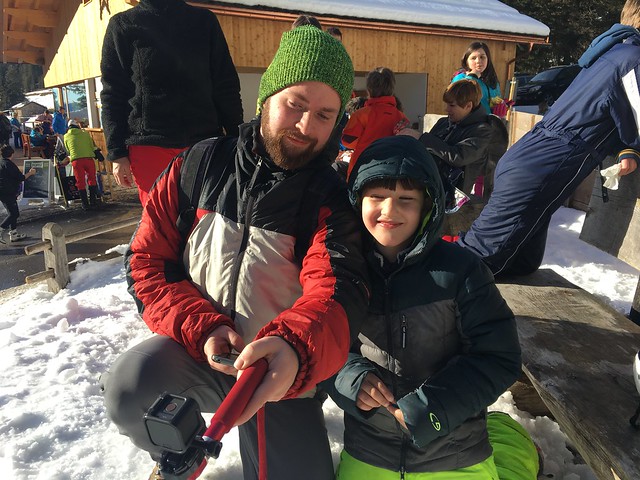 Once we got down to our first stop we hung out for a bit, so Anto could explain the terrain to me.

And the kids and their friends (the greatest part about being in Italy is hanging out with Anto’s friends and family!) could pause for a group photo. 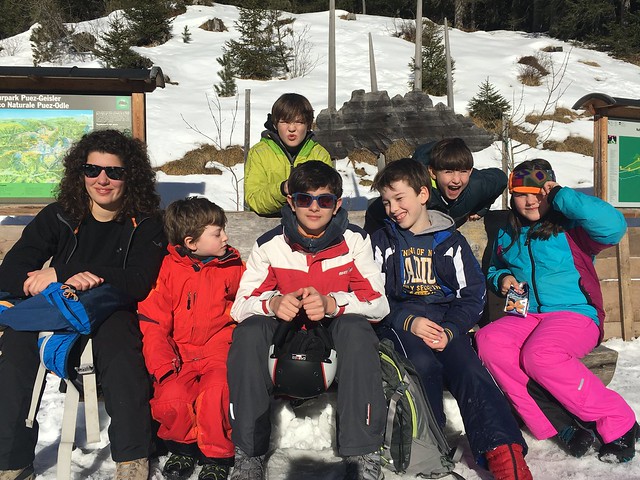 We were now back where we parked the cars and started the hike. But the trail goes on for a while longer, and they now had sleds available for rent again (just 5 euros a sled). So we got another sled and then broke up into pairs: Miles and Ruggiero; Tess and Mathilde; and Tommaso and I. We then proceeded to head down the rest of the mountain on sleds where we would be met at the bottom—and that was freaking awesome. Barreling top speed down the sled trail singing Gangnam style with Tommyboy, I haven’t had that much fun in a long while. Unfortunately I’m not nearly as confident (or mendable) as Miles and Tess, so there’s no video of our ride down. You’ll just have to believe me on the awesome part. I do have some indirect evidence of how much fun it was though, Tommaso fell asleep on Daphne less than 5 minutes into the ride home! 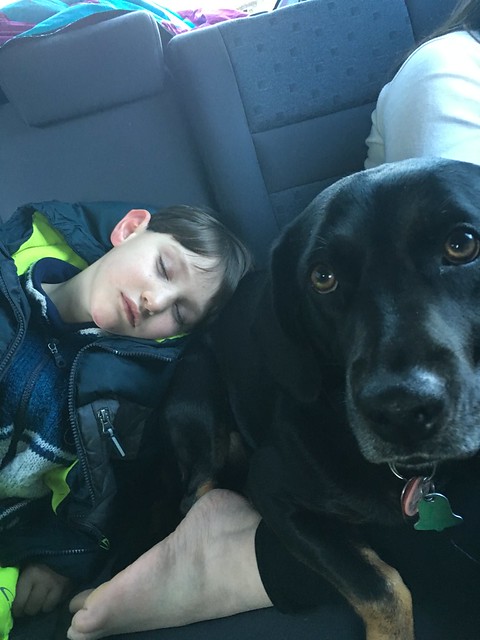 Life’s very, very good in Italy. And nothing like a Sunday in the mountains to bring that fact into strong relief.