Tags are a beautiful thing

Tags on UMW Blogs are divine! 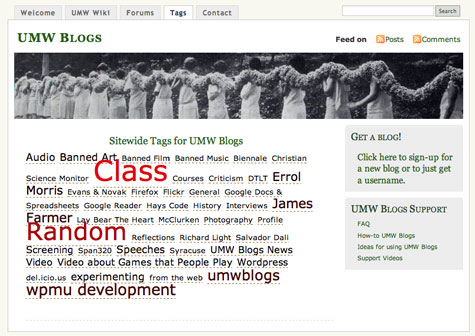 I had labored over the sitwewide tags for well over a month to no avail, today was my first day on the forums in WPMuDev Premium, and within half an hour I had the fix. I feel like UMW already owes James Farmer so much for all the amazing stuff he has so generously brought back to this community. Having joined his service today, within minutes I already feel like I owe both him and Andrew Billits (the founder of WPMuDev) that much more. They’re good, very good! And for those of you who frequent the public WPMu forums, you might have noticed the all too conspicuous absence of Dr. Mike -perhaps the single most prolific and imaginative moderator I have yet to see in the WordPress community. Well, if you join WPMuDev, you might be in for a very pleasant surpise.

The fact that UMW has finally given back a little–and I stress a little given what we receive in return–has me thinking about the innumerable folks in the WordPress community we should be throwing a nominal donation to when possible. Granted we are a poor public school that is about to get poorer with the looming budget cuts. But, as Gardner said to me during my interview for this job almost two years ago, “We don’t have that many resources, but we’re scrappy.” Nothing has proven truer than that statement, and personally I really don’t know if there is any greater resource. And isn’t it usually the poor folks who are more generous with what little they have because they know so intimately what it’s like not to have it? So, in closing, to quote Bill Murray in Rushmore, “Take dead aim on the rich ones, get them in your cross hairs and take them down. Just remember, they can buy anything, but they can’t buy backbone. Don’t let them forget.”