Was the writing on the wall? I’m not a numerologist, nor do I necessarily believe in signs. But I noticed a few years back that there was a strange convergence of political, social, and tragic factors in the opening scene of the greatest of all films from the 1990s, The Big Lebowski (1998). The opening scene frames the dude as the man for his time and place, which is Los Angeles in 1991. Throughout this scene in the supermarket we are continually reminded of the first war in Iraq. The Stranger’s voice over frames the moment by mentioning the “conflict with Saddam and the Iraqis” purely as a way of introducing the character of Lebowski, not as a hero, but as a man who perfectly suits his time and place. The importance of time and place is essential to this film, and I think Lebowski’s persistent place in the popular imagination (well, at least my popular imagination) has so much to do with a vision of an antediluvian nation. An outer body look at a time and a place before the devastating losses of the twin towers. A lazy instant before Bush compounded this international tragedy with a phantom war.

I don’t know precisely why The Big Lebowski has always struck me as the most profound statement upon the events of September 11th, 2001 -intentional or not. This is not to suggest that Bush senior’s stilted declaration that “This aggression will not stand” or the bizarre coincidence that the Dude dates his check for 0.69 cents Sept. 11, 1991 (precisely one decade prior) marks some occult foreshadowing. Rather, more importantly, this scene represents a moment that I lived through (in Los Angeles no less) marking that strange passage of time that movies always do for me. Yet, unlike so many other movies, this movie (well, actually, this scene) has been branded on my mind whenever I think about the even more recent history of New York City during September 11th -and the ongoing political maneuvering for geo-political power that was this government’s feeble attempt towards national solace. Where are we as a culture? Are we capable of dealing with tragedy or loss? What are we doing in Iraq once again? And why, for god’s sakes, are our super markets so shiny while our foreign policy is so messy? 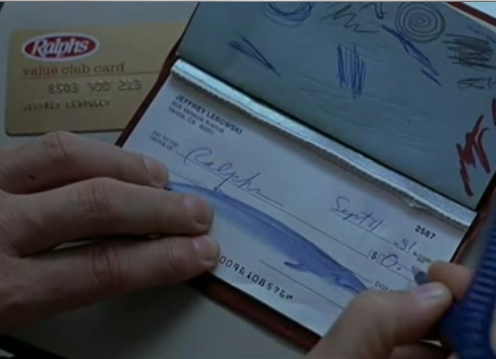 In Don DeLillo’s novel White Noise, Murray Jay Siskind points out that a supermarket “is sealed off, self-contained. It is timeless.” This moment in The Big Lebowski captures this vision, at least for me, of a nation that is endlessly self-referring and finds it almost impossible to position itself in the world in some meaningful relationship to others as well as its citizens. The writing is on the wall -mene, mene…