The Daily Shoot and manic ravings about ds106

And some more art… 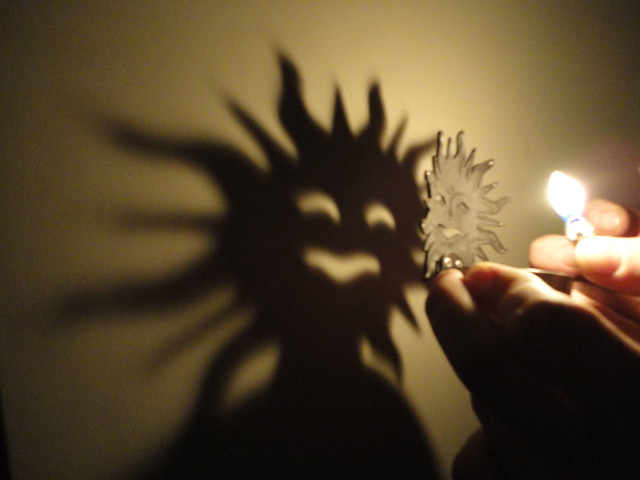 This week is the start of the first hands-on creative section of the course [hahahahah!], but I think we all know what happened to the idea of sections and order in this course. They are blurring and people are creating as the good web deems it their right, and people are talking, coding, creating, mashing, watching, recording, listening, and re-mixing all the while. The #ds106radio station almost seems like it’s always been here, and the class itself is recovering from that meteor and building steam all the while. And Grant is just on fire, his work is legendary at this point, and it is only a week old! I’m in heaven, and I can’t deny it.

(Thank you #ds106radio)
And there is even some excellent reflections (and quite a mashup!), that puts a lot of last weeks events in some perspective for me–while illustrating just how fast, cheap and out of control does have its casualties.

On Tuesday, February 1st, we have D’Arcy Norman coming into our classroom via the airwaves, and he has already given us a rad photography resource (I love the way he presents this, beautiful) to consult as we spend the next two weeks doing daily shoots—amongst other visual assignments (more on them anon). I’m really looking forward to this!!! Piping in folks has been a real highlight this semester, something I picked up from Alec Couros, and finally got my shit together enough to contact and line people up. They’ve been very cool with my late and haphazard notice, and for that I am really appreciative. And I promise there will be many, many more to come!!! What’s more, every relevant class we have on Tuesdays and Thursdays from 6-7:15 for the rest of the semester will be simulcast through ds106 radio if the slot is still available (20 shows already from what I understand).

But here is what I really wanted to say, I am bringing the ds106 daily shoots into the course blog through a plugin called Flickr Tag. Experimented with it today, and it does everything I need, and I am gonna change the blog around a bit come tomorrow afternoon to show them off. But until then, Flickr Tag allows me to pull in up to 100 photos off one (or several) tags of a Flickr photo. So I asked everyone to tag here photos with both ds106 and ds441 (the later being the daily shoot hashtag for that day). I’m also asking everyone to include a third tag that defines their section so I can cut the images yet another way. So, here is an idea what the code is like for Flickr tag

And once I put that in, it automatically adds a link back to Flickr and displays on the blog with litebox. It is a slick plugin and does everything I need it to do. And while I don’t necessarily expect folks to use ds106.us to view each others images (I mean they can use dailyshoot.com, RSS, flickr contacts, etc., just as well, but I like the idea of the visual taking over the blog these next two weeks while we explore photography as well as design (design being a new experiment this semester).

It will be like this in the navbar, and everyday, the new results for the day’s daily shoot will show up: 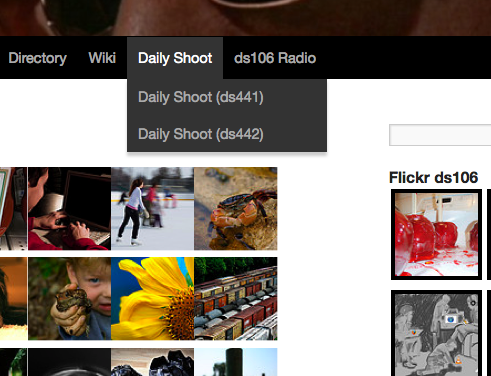 Here is the ds106 tag only (need to figure out why all Bionicteaching‘s photos are pulling on that one). 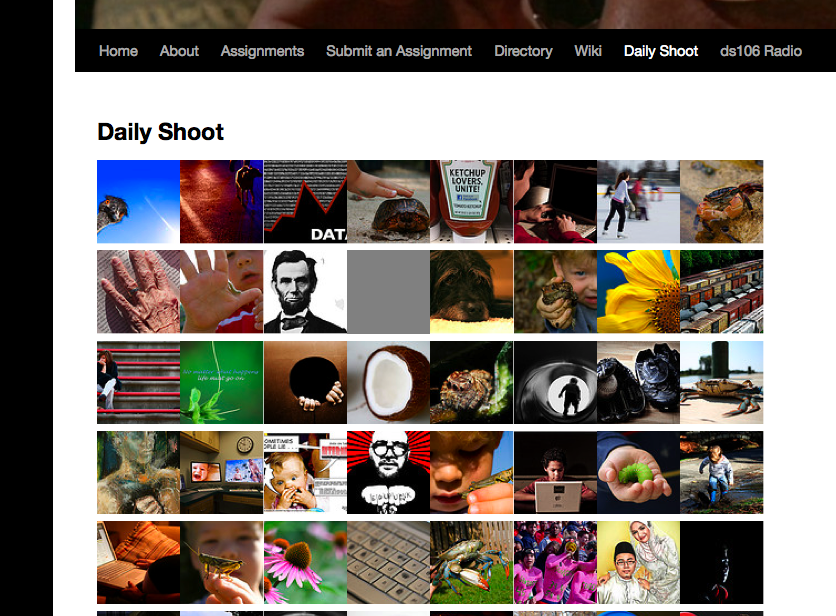 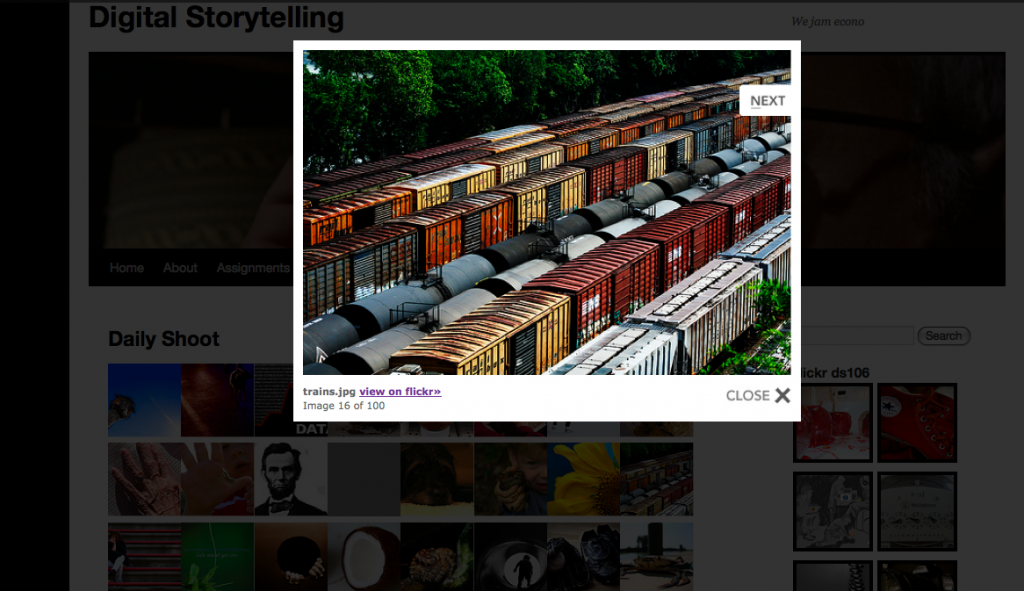 And here is for any given day (this being for today #ds441, and only a test). 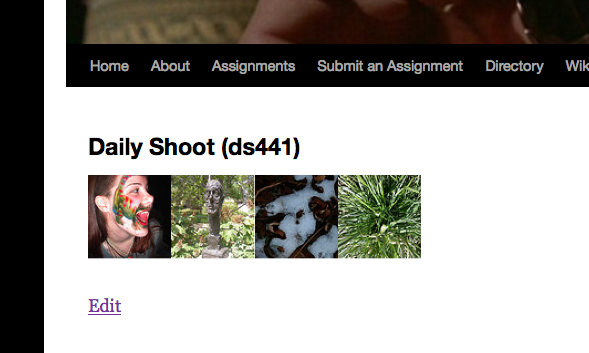 I know a lot of folks could have done better, but this worked easy for me without a lick of programming on my part. Unlike Aaron (@galagonwagon) who coded up the Twitter bot that announces new tracks for #ds106radio–awesome stuff. Show me a class that has their Computer Science students dreaming out in the wild west building stuff that is integral to the class before the end of week 3? That is really building the airplane while it’s flying, in fact this whole course has been that way so far. I mean Martha not only perfected the animated GIF over the weekend, but cracked the aggregated comments syndication nut in two simple parts here and here. Are you kidding me?

Everyday a new wonder to behold, so many of them I’m sure I am missing a ton, so help me see them. I take tweet requests…because I cannot read everything. More than 1000 posts and we are only starting week 4. Insane!!!

Because I can and I will… 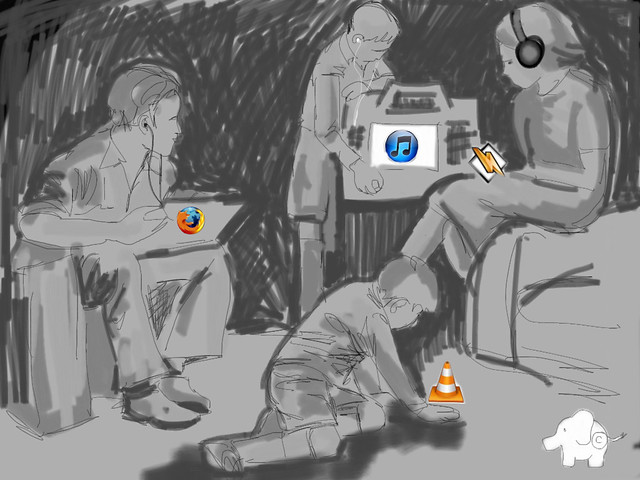 THERE IS SO MUCH GOD DAMNED ART!!!

7 Responses to The Daily Shoot and manic ravings about ds106