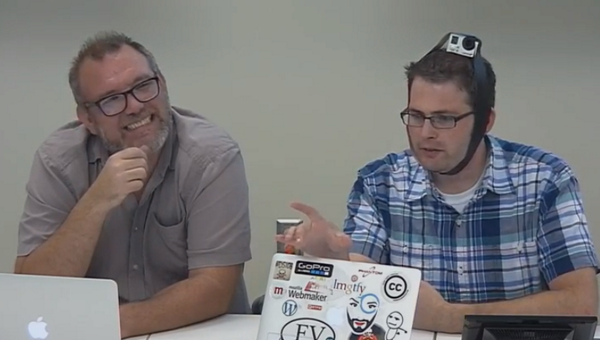 Tim Owens and I had some fun this week in our new incubator classroom that is attached to the DTLT suite in UMW’s new Information and Technology Convergence Center. It’s a completely awesome space, and we haven’t really had the time to experiment with it until the beginning of the semester slowed. Early this week Tim started to get that look in his eye, and soon enough wires were flying, Crestron controls were being dissembled, and music was being made.

The room has all moveable furniture, two remote control cameras, a stationary lecture capture camera, two ceiling mics to capture discussion, a lectern mic, two mains screen projectors, a confidence monitor on the back wall, and four roving monitors. Each of the screens can be projected to by any laptop in the room, and split into quadrants to have as many as four devices on one screen/monitor. So, theoretically, you could have twenty one different screens showing at once. Are you confused yet? Good, I am too.

The room is insane, and I have been teaching The Internet Course in it for the last four weeks alongside Paul Bond, but haven’t really been able to take advantage of the room because it wasn’t done when classes started. This week we played a bit of catch-up, and on Thursday night I had the students presenting on how the internet works broadcasting their laptops to two different screens in the room. What’s more, Paul was at the table with the rest of us over Google Hangouts through a fullscreen roving monitor—you can see an example of this in the image below with Mikhail Gershovich—and we were pulling in the room audio off a couple of table mics (we’re still figuring out how to get an output for the ceiling mics). And we sent a stream of the class back to Paul, as well as what was playing on a given screen/monitor.  All of this voodoo was a result of Tim’s relentless tinkering all week long. 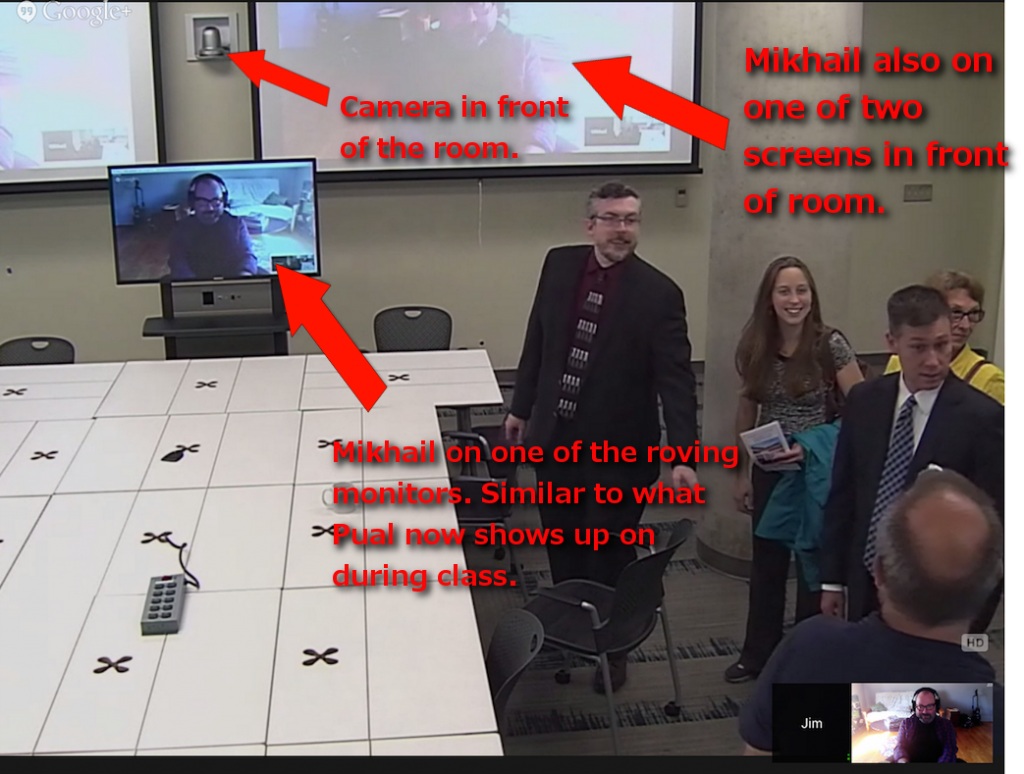 The room is an experiment in a different kind of presence. Not necessarily telepresence, which it can do pretty well, but a sense of networked presence. The idea that the room is itself an IP address—or a series of them—on the web that other can experience and explore. The cameras can record what’s happening, and we can also stream out the course, and have it automatically archive.. I’d could share the IP and code for others to share their screens and audio from afar. And we’ve only just begun, there is much more to be done in here, but major kudos for Timmmyboy locking in this week and getting this all hooked uo

Now, below is a link to the DTLT Today video that’s over an hour. I would start around the 30 minute mark, which is when Tim and I get rolling a bit on the building and more. Also, we are trying to figure out the room while filming this, so the quality and exactitude should be considering with this in mind 🙂

Finally thanks to both Barbara Sawhill and Mikhail Geshovich for sharing there screenshot on Twitter.

2 Responses to The Incubator Classroom