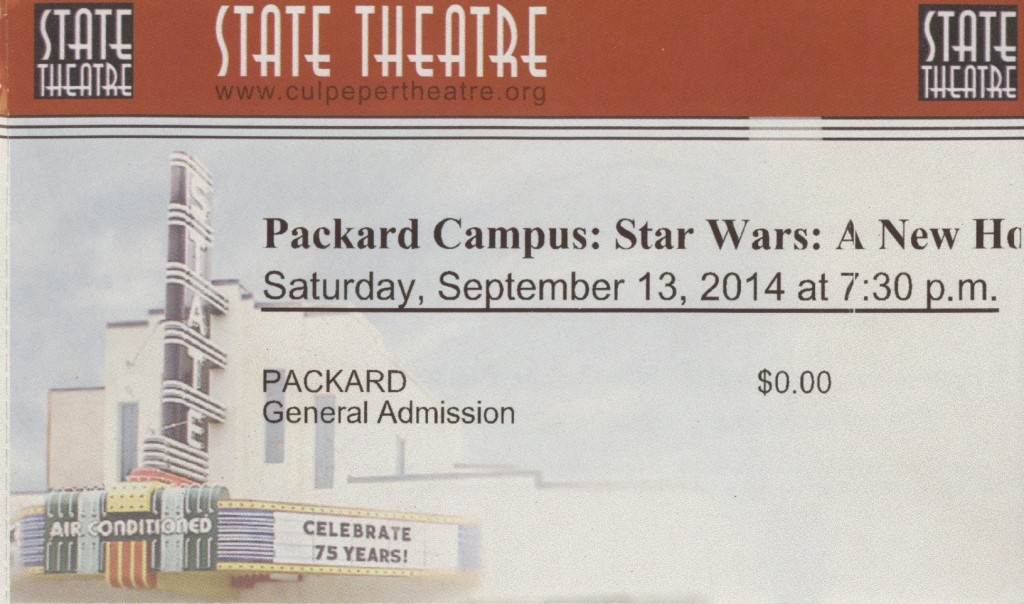 A week ago I went to the Library of Congress, Packard Campus in Culpepper to see Star Wars in 35MM. It was as good as I had hoped. With a remarkably clean print of the 1997 re-mastering, there was no mistaking the beauty of film. Although the addition of Jabba in Mos Eisley still stands out as the single worst alteration of the original.

What was cool is this was the first time I had been to a sold out theater in a very long while. In fact, the last time I was in a sold out house was for the re-release of Star Wars at Mann’s Chinese Theater in Los Angeles in 1997. There was a palpable feeling of excitement, and a few folks even brought their light sabers. The experience was awesome, and it was little Tommy’s first time seeing Star Wars. Tess was right beside me, but unfortunately Miles missed it because he was attending his first sleepover (damn kids growing up and all with their own agendas!).

Couple of things about the movie. It was loud, and I think that’s how I remember it. It’s a straight stereo theater with some big speakers on the side walls. I remember Grant Potter remarking favorably about the sound when we watched The French Connection there a couple of years ago, which makes me think it’s solid.

Also, the scene when Han Solo, Chewbacca, and Luke Skywalker jailbreak Princess Leia from the detention center was gorgeous. Much more brilliant than I ever remembered between the colors and the sound during the extended shootouts.

I was struck by the trivia slideshow that was playing while we waiting with anticipation.A couple of things I thought were interesting:

I would blog more, but I am just about to put the kids in the car to drive out for The Empire Strikes Back in beautiful 35MM 🙂