The Many-Headed Hydra, or a Useful Figure for the Quotidian Revolution

Jon Beasley-Murray recently posted about the political term multitude, the concept itself is rather complex and can be traced through the political texts and philosophical thought of Machiavelli and Spinoza, and more recently the concept has been employed by Michael Hardt and Antonio Negri in their book Empire. After a little digging I realized Jon has an earlier post from 2006 called Multitudes wherein he enumerates some of the different ideas surrounding the term. As one respondent notes about Jon’s discussion, he outlines a particular mode of multitude, “‘an actually existing one’, the multitude which exists in (points of the growth of new) hydra heads”:

A multitude that forms and coalesces along the lines of flight within each and every social formation? A multitude then that is sociological, incarnated in piracy, in everyday life, in Temporary Autonomous Zones, in the quotidian refusals and resistances by which we make our lives bearable. This multitude is actual, rather than simply virtual. We already share in and participate its activity.

Now I won’t pretend to be able to give an adequate overview of all the theoretical implications of this term, for it is an idea I am currently struggling with. Nonetheless, I want to bring it up here because many of the points Jon makes around this idea in his more recent post are quite resonant with the political, social, and relational space in which we find ourselves at this particular moment:

The multitude is common. It is ordinary and everyday, and it is also both the product and the producer of shared resources….The multitude seeks connections based on what we already hold in common; its polyvalent powers of connection open up new bases for commonality….the common and the corrupt often overlap: both are products of informal and unsupervised networks….Again, the multitude is ambivalent and the state has no monopoly on corruption.

Now granted, I am taking Jon’s quotes above out of their original context by placing them in a kind of loosely joined series of impressions of how his thinking about multitudes provides an interesting framework for theorizing loosely joined, heterogeneous networks for production, connection, sharing, and a form of everyday resistance. And while George Siemens’ theory of Connectivism frames the impact of new modes of technology on learning using the figure of the network, the metaphor (for me at least) is tied too closely to a kind of neuroscience model of connections, that while invoking complexity and chaos, seems overdetermined by a series of comparisons that are predominantly technological and scientific. Which, in turn, under emphasizes the relations of power at work in any series of economic, political and social connections (all of which play a key factor in any larger learning theory). What happens when you externalize learning not as a space of power between people, but within “non-human appliances”? That is truly a question, and many of these ideas are what I’ll be interested in tracing during George and Stephen Downes’ course on the topic this Fall, itself a grand experiment in the theory of multitudes given there are already almost 800 people expressing interest. So what if, alternatively, we were to think of learning networks not so much along the metaphorical axis of techno-scientific language (for is learning a science?) or displaces learning theories, but within a more social, historical, economic, and political framework? What if we were to imagine the space of the multitude and its relationship to power in terms of motley crews full of pirates, sailors, commoners, laborers, and slaves? Push that a bit further, what if we were frame the unpredictable processes of learning that occur on the open web (regardless of institutions and their hierarchies) with the metaphor of a many-headed Hydra. The Hydra is a figure for imagining and examining the networked relations in which we currently learn, share, and organize through a series of social relations to power, property, and politics that are often outside of and in tension with the predominant logic of large, centralized educational systems. Many of these struggles are amplified by the constantly changing landscape of information and infrastructures, making the ability for people to connect, share, publish and learn outside of traditional currents of education a potential (if not necessary) threat to an established hierarchy premised on anything but diversity. (Just think of higher education institutions in regards to diversity, they may some of the least diverse institutions on the planet. Think about it, it’s a space where just about everyone with power has a Ph.D. and has been run through a relatively homogeneous intellectual process at a similar institution filled with similar people, is that at all consistent with a commonly touted value system of some kind of excellence through intellectual diversity?) How much would these institutions change if that weren’t the case? And would we see some interesting challenges to the ways in which we approach teaching, learning, and expertise? The resonances for this particular metaphor , at least for my use of it here, comes from Peter Linebaugh and Marcus Rediker’s text on the history of the revolutionary Atlantic titled, you guessed it, The Many-Headed Hydra: Sailors, Slaves, Commoners, and the Hidden History of the Revolutionary Atlantic. Here is a series of cobbled quotes from the introduction that frames how the myth of Hercules versus the Hydra has been employed during the 17th and 18th centuries as a means to both imagine and control loosely connected networks of resistance: 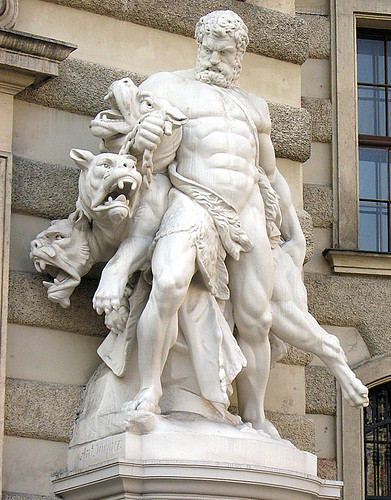 The labors of Hercules symbolized economic development: the clearing of land, the draining of swamps, and the development of agriculture, as well as the domestication of livestock, the establishment of commerce, and the introduction of technology. Rulers placed the image of Hercules on money and seals, in pictures, sculptures, and palaces….these same rulers found in the many-headed hydra an antithetical symbol of resistance and disorder. A powerful threat to the building of state, empire, and capitalism. Hercules’ second labor was the destruction of the venomous hydra of Lerna. The creature born of Typhon (a tempest or hurricane) and Echidna (half woman, half snake), was one in a brood of monsters that included Cerberus, the three headed dog, Chimera, the lion-headed goat with a snake’s tail, Geryon, the triple-bodied Giant, and Sphinx, the woman with a lion’s body. When Hercules lopped off one of the hydra’s heads, two new one’s grew in its place.

From the beginning of English Colonial expansion in the early seventeenth century through the metropolitan industrialization of the early nineteenth, rulers referred to the Hercules-hydra myth to describe the difficulty of imposing order on increasingly global systems of labor. They variously designated dispossessed commoners, transported felons, indentured servants, religious radicals, pirates, urban laborers, soldiers, and African slaves as the numerous, ever-changing heads of the monster. But the heads, though originally brought in to productive combination by the Herculean rulers, soon developed among themselves new forms of cooperation against those rulers, from mutinies and strikes to riots and insurrections and revolutions.

It would be a mistake to see the myth of Hercules and the hydra as merely an ornament of state, a classical trope in speeches, a decoration of ceremonial dress, or a mark of classical learning….the hydra became a means of exploring multiplicity, movement, and connection, the long waves of planetary currents of humanity. The multiplicity was indicated, as it were, in silhouette in the multitudes who gathered at the market, in the fields, on the piers and the ships, on the plantations, upon the battlefields. The power of numbers was expanded by movement, as the hydra journeyed and voyaged or was banished or dispersed in diaspora, carried by the winds and the waves beyond boundaries of the nation-state. (The Many-Headed Hydra, pgs. 2, 3, 4, & 6)

Now I fully understand there may be some conflation here between the early formation of global capitalism and our particular moment—historical specificity is crucial and it is something I will be working towards in the coming weeks, especially while reading Capital, Volume 1—yet this idea of multiplicity, constant movement, and connection as a human space of thought may afford a real opportunity to re-imagine spaces, nation-states, and commonalities beyond the often reactionary logic of national identities. More than that, the currents of our networks afford a cultural exchange and individual empowerment that allows us to work and think amongst distributed connections of people that similarly have a tangential allegiance to their structured workplace, their labor. Now, I’m sure the anti-capitalist language of Redicker and Linebaugh may anger some when talking about something as ‘pure and apolitical as learning,’ nonetheless the social relations in which we operate are always already political and the sooner we start recognizing our institutions and the jobs we do as extensions of a particular kind of politics that are often wrapped in the tattered garments of the humanist tradition, even if hastily patched together by the neo-liberal cliches of “excellence,” “development,” “liberty,” “globalization,” and “productive competition.”

Finally, the many-headed hydra as a figure may seem relatively removed from our moment, given its employment by the “rulers” over the motley organizations of a multi-ethnic class of commoners in the 17th and 18th century. I would argue, however, that in many ways the metaphor has never been more with us, and as one might expect, it can be found in one of the most embattled and politically charged networks on the internet: Peer-to-Peer, and even more specifically bitTorrent. Take, for example, a post last year at this time on the TorrentFreak blog titled “BitTorrent Survival: The Way of the Hydra,” which discusses how too few bitTorrent tracker sites account for more than half of all the traffic and served torrents on the internet:

Although it’s great initially for the mainstream to have visible big ‘brands’ such as The Pirate Bay, Mininova and TorrentSpy [since deceased], it’s a precarious situation to have such a top heavy structure to the BitTorrent community. It’s great having a ‘multi-headed hydra’ but not so great when just one of those heads carries half of all the public torrents. This situation must be addressed. Resources need to be spread around in a manner which ensures that a few ‘big bombs’ are unable to dismantle major parts of the infrastructure.

“So public message to people – start up your own torrent sites, make the internet the hydra it is and needs to be. If there’s hundreds of sites, they can’t all be shut down. And well, if they shut down the few that are today, there will be hundreds of sites, I’m sure, but let’s start them before so we can spread the word of them easier.”

Now while bitTorrent specifically, and P2P more generally, may seem a contentious example to use given it is fraught with questions of copyright, ownership, illegal sharing, and makeshift communities of resistance, but on the contrary I think that makes these networked and politicized communities a perfect example. The many-headed hydra metaphor is already being employed to define the complexity of this massive and decentralized nexus of connections. There is a new notion of multitudes that is networked, constantly changing, ever-adapting, and often premised on bottom-up organizations. They are everyday communities that are constantly changing and always re-imagining their relationship to power, property, and politics through “quotidian refusals and resistances.” The times we live in are about much more than being networked or connected as a way to “add value” to traditional ideas of learning, they are about understanding the potential for change and recognizing the power of possibility such a reality holds for us collectively, as a multitude in the shape of and everyday hydra, with, many, many heads.

This entry was posted in Uncategorized and tagged bitTorrent, many-headed hydra, P2P. Bookmark the permalink.

9 Responses to The Many-Headed Hydra, or a Useful Figure for the Quotidian Revolution