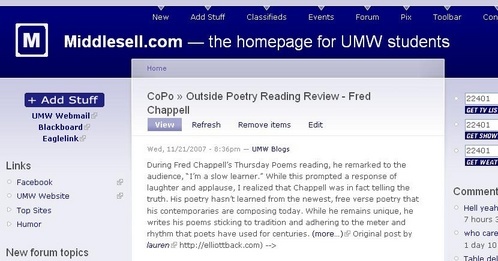 I happened upon Middlesell early this morning (this site is an independent homepage for UMW students established by the inimitable Bobby Durette) only to discover that posts from around UMW Blogs are being fed into this space. How fascinating!

Now it really shouldn’t come as a surprise to me, for Bobby is a remarkable guy who I have had the pleasure of listening to and talking with on several occasions. Here’s a brief tech bio of one of UMW’s finest: he started Middlesell as a hand-coded PHP project in his Freshman year; during his Sophomore year–after a recommendation from Martha Burtis and Cathy Derecki– he decided to use Drupal as the site’s CMS; and now he is currently a Junior and has effectively developed a community site that is a regular online destination for a large part of the UMW campus. Most impressive, Jedi! What I particularly like about Bobby is that he is wise beyond his years and a consummate gentleman, and I say all this in spite of his using Drupal as his CMS of choice mind you 😉

So, when I saw that he was pulling posts from the UMW Blogs sitewide feed into Middlesell I really shouldn’t have been all that surprised. He’s a smart guy and recognizes the value of solid content that is directly targeted to his audience, not to mention that he is intimately familiar with with the wondrous power of RSS aggregation. All of which makes me think about a thread on a post D’Arcy Norman wrote recently about creating a blog directory for WordPress Multi-User wherein Bill Fitzgerald suggested how Drupal could be easily configured with views to offer this functionality, but Drupal disciples always mention the Views Module when they want to discount WordPress (and they usually mention the CCK module soon after this) so I wasn’t taking the bait.

What was most interesting to me, however, was something Mr. Fitzgerald (I’ll appeal to his sense of formality) describes in his second comment on this thread that amounts to a more sophisticated interaction between these two applications that would utilize WPMu as the publishing platform and would run its sitewide feed through Drupal to harness functionality such as searchable aggregation, mapped external tags, and OPML generation. Mr. Fitzgerald says the following in his comment on D’Arcy’s blog:

The more I think about it, though, the more I like the idea of an OPML feed coming out of a blog directory[in this case WPMu], and being fed into a searchable aggregator. Keep in mind that the feedapi allows for mapping of external tags into Drupalâ€™s core taxonomy, and that you can then slice those imported feeds up into new sections via views, and then expose that via an rss feedâ€¦

Yup. I taste some Drupal-Wordpress kool-aid, consumed straight out of the grail

So, if I understand this correctly, and please correct me if I don’t, WPMu remains the individualized publishing platform and Drupal handles the aggregation, searching , and display. Drupal wrapped around WPMu in other words (something the good folks running Arizona State University’s blogs mentioned to me at ELI last year, but I couldn’t fully grasp it).

So, Mr. Fitzgerald, do we have a shared project/vision finally?

If neither of you are interested, I’ll just have to take this silence as a tacit understanding that Drupal sounds great in blog comments and can feed posts into a site like any old aggregator, but just doesn’t have what it takes to push this baby to the next level. No sweat, I just won’t let you forget it for a while is all.

4 Responses to UMW Blogs & Middlesell Sittin’ In a Tree…