Remember when the gas pumps moved from attended to self service? Well, if you’re not from dirty Jersey and you happen to be old enough you might remember this transition, and for me it was a special one.  I always wanted to be able to pump gas into the big blue Suburban my mom drove around in circa 1980 or 1981, but it wasn’t until the mid to late 80s that I got my wish. And I have to say, pumping my own gas remains one of life’s little pleasures, as does cleaning my own windshield with a squeegee. A pleasure right up there with the first time my mom let me use her tellerbeam card in 1982 (a tellerbeam card is what we called ATM cards when they first came out on account of our bank’s nickname for them)—it was nothing short of magic. Pure at utter magic!

So, all this to prepare you for a little bit of modern day magic on UMW Blogs.  Back in January I started to notice a few study abroad blogs on UMW Blogs, so I decided to quietly set up a  UMW Study Abroad aggregating blog space that would actually pull the posts from a couple of the blogs I noticed into a centralized aggregator blog using the FeedWordPress plugin. I emailed the three students whose blogs I had seen and told them my plan. They were cool with it, so off we went. 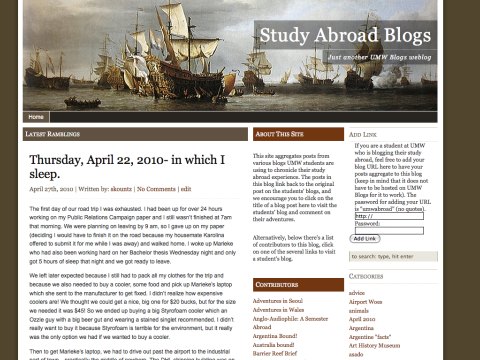 When setting up the space I decided to add UBC OLT’s “Add Link” widget to the sidebar* (a brilliant plugin that allows users to add the URL of their site from the sidebar, which in turn is added to the FeedWordPress syndication queue) with a little blurb telling folks who happened upon the site that anyone at UMW blogging their study abroad experience could feel free to add the URL of their blog.  In fact, here is the actual wording:

If you are a student at UMW who is blogging their study abroad, feel free to add your blog URL here to have your posts aggregate to this blog (keep in mind that it does not have to be hosted on UMW Blogs for it to work). The password for adding your URL is “umwabroad” (no quotes).

Finally, I added a link to the Study Abroad blogs on the frontpage of UMW Blogs, and kinda forgot about it for a little bit. Over the next four or five weeks, the number of blogs aggregating into this space went from three to fourteen. Almost 5x as many students at UMW Blogs found the site and must have been seduced, much like I was as a child, with the novel idea of self service technology. They added their URL, and as a result the Study Abroad aggregated blog site has been one of the most active spaces on UMW Blogs, with over 275 posts from 14 students in less than four months (that’s on average 20 posts per student, and keep in mind this was not only optional—but unofficial and downright obscure). And the posts are long and candid documents about these students experience in countries ranging anywhere from Argentina to Australia to Scotland to South Korea. They are all over the map, and what they are writing and sharing is really quite good.

Which reminds me of another piece of the UMW phenomenon that I really don’t pay as much attention to as I once did when the whole blogs experiment was getting started a few years back: the students. UMW’s students are a special bunch, they are gritty, unpretentious, and they demand a lot from their education—more specifically their professors. I have had literally thousands of interactions with them over the last four or five years, and this semester I am seeing many of whom I “digitally made” getting ready to graduate. It’s a weird experience because for the majority of them I was not their professor, but rather a gadfly who kept invading their classrooms for an hour or so talking about anything from blogs to digital identity to open education to copyright, etc., and not only did they refrain from being rude or outright stoning me, but many of them got excited by the ideas and consistently blew my mind with the work they did, and continue to do.

My ode to this graduating class (many of whom I realized today I’ve made some very solid relationships with) may have to be the next thing I write. I constantly show my love to the professors (even when they fail me), but now it’s student time. And seeing the Study Abroad blog aggregator run over with great stuff and truly remarkable experiences reminds me that there is no one or two people making this thing work, it’s a distributed,  campus wide push for expression and sharing that cannot so easily be located.  All we are doing here is creating the opportunities for those connections, and as has consistently been the case, the students not only rise to the occasion, but exceed just about all expectations.

*I had problems with version 1.1 of the Add Link widget pulling the URL directly into FeedWordPress on UMW Blogs. I need to tell Enej as much. I’m sticking with the 1.01 version for the time being, but please keep in mind this issue could only be cause the UMW Blogs setup is so bizarre.

4 Responses to UMW Study Abroad Blogs: A Case Study in Aggregated Self Service