It is truly amazing what gets unveiled when the copyright laws lapse, the public domain kicks in, and an unbelievable online digital resource like archive.org broadens its library and allows us to access the past in new and exciting ways, but also, at times, in challenging and problematic ways. I was on iTunes recently seeing what’s new and exciting with the videocasts when I came across the Vintage Tooncast. I downloaded about 18 short cartoons (each with red-font type labeled “explicit”) expecting to see new, mashed-up episodes of our familiar animated favorites like Mighty Mouse, Woody Woodpecker, Herman the Mouse, Casper the friendly Ghost and the like.

However, after watching a few episodes I was struck by the fact that these cartoons were neither edited nor re-dubbed at all – so much for my mash-up theory! In fact, they were the originals in all their integrity. “That’s odd,” I wondered, “why the warning then?” After viewing a few more cartoons the explicit tags pasted on these videos became more than clear. The Vintage Tooncasts description in iTunes ( which, by the way, I failed to read in my frenzied search for more things to obsessively collect online) reads as follows: 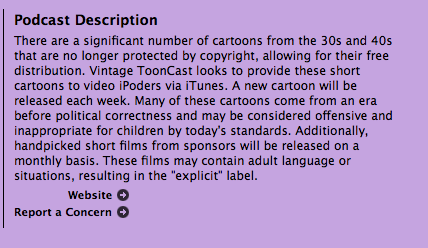 Wow, and then it struck me that this label of “explicit” to define the cartoons that were once like candy during the 1930s and 1940s seems to me to be a very different kind of warning. More than an indicator of foul language, violence (which these cartoons do indeed have), or nudity – these warnings are premised on a shift in our own historical understanding and definition of cultural identities now and then, capturing the powerful (and potentially volatile) impact of visual representations of race at different moments throughout the twentieth century. One cartoon that struck me along these lines in particular was Merrie Melodies’ “The Early Bird Gets the Worm.” This cartoon is very much in the vein of one of Disney’s greatest kept secrets Song of the South (1946), which represents in an “explicit” manner the deep-seated racial stereotypes at work in the media of the early twentieth-century. 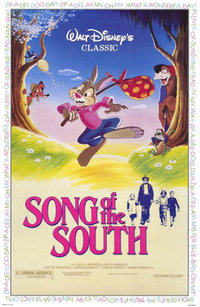 A few years back I took a seminar with Professor Heather Hendershot from Queens College who did a wonderful job examining this medium and relating it to the ways through which the history of animation during the twentieth century traces a complex trajectory of race, class, and gender -framing sharply the role of media in both their codification as well as their subversion. Herein lies the rub, how do we understand the potential uses for the availability of these cartoons which are potentially offensive, yet, at the same time are historically and culturally significant for numerous reasons? This, in my mind, is all primary research material for an important paper or class or seminar or book on the framing of a visual rhetoric of culture during the 1930s and 40s – or an examination of the animated war effort during the 1940s, or a framing of animating race, gender, class, or … well go to vintage tooncast, watch a few movies, and tell me what you think!

This entry was posted in movies, video and tagged animation, copyright, video podcasting. Bookmark the permalink.