Born of the brainstorming conversation Tim Owens and I had on our way to Oklahoma last month, the push-based syndication hub using with Known for Wire106 has come to pass. It’s pretty exciting, and it marks a welcome departure from the hacky hacking that has undergirded all the RSS work we’ve done at UMW with FeedWordPress for over six years now.

When I went to visit Brian Lamb in Kamloops in December of 2012, I lamented how RSS syndication on UWM Blogs and the then pilot of UMW Domains was increasingly becoming untenable to scale across campus—everything was a hack. We needed a better way to syndicate the various posts/media we’re creating in courses—and it needed to be a lot easier for faculty and students alike.

But it wouldn’t be until April of 2013 when I hung out with Audrey Watters and Kin Lane that I got a glimpse of what an alternative future to RSS might look like: push-based APIs! The foundation for Reclaim Your Domain was laid, and over the next fifteen months it’s been driving much of what I’ve been doing at UMW and beyond: the Internet Course, Reclaim Hosting, OpenVA, etc. It’s now come full circle back to the internet’s first feral web course: ds106.

This semester we’ll be experimenting with a course hub built around the open source application Known (although everything will also be feeding into ds106.us via RSS as well). I’ve already referred to Known as an open, distributed Tumblr, and that’s pretty apt. The minimalism and focus on publishing content quickly and easily makes it very compelling. What’s more, developers and co-founders Ben Werdmuller and Erin Jo Richey have been more than willing to help us realize a syndication model with Known that we can experiment with for this semester’s wire106.

The idea at the heart of the whole thing is actually pretty simple. And the more I think about it, the more it’s apparent that Known—or something a lot like it—was the application Audrey, Kin, and I were imagining when we hatched Reclaim Your Domain. The following screenshots of the on-boarding/publishing process might reinforce that.

Known allows you to publish status updates, photos, posts, audio files, videos, etc., through your own space and push them to social media sites like Facebook, Twitter, Flickr, SoundCloud, etc. You hook into these site’s APIs, and rather than RSS, you are directly posting to these services as well as to your own database for the “primary” version. That’s the “own your own data” and “push it to the social media siloes”element of this equation.

Add to that a syndication hub and reader and you now have yourself an application that technically instantiates the ethos of Domain of One’s Own and the ease of UMW Blogs at once, in the context of a specific, streamlined course space. Let me take you through the sign-up on UMW Domains for wire106 just to give you a sense of how this might look. 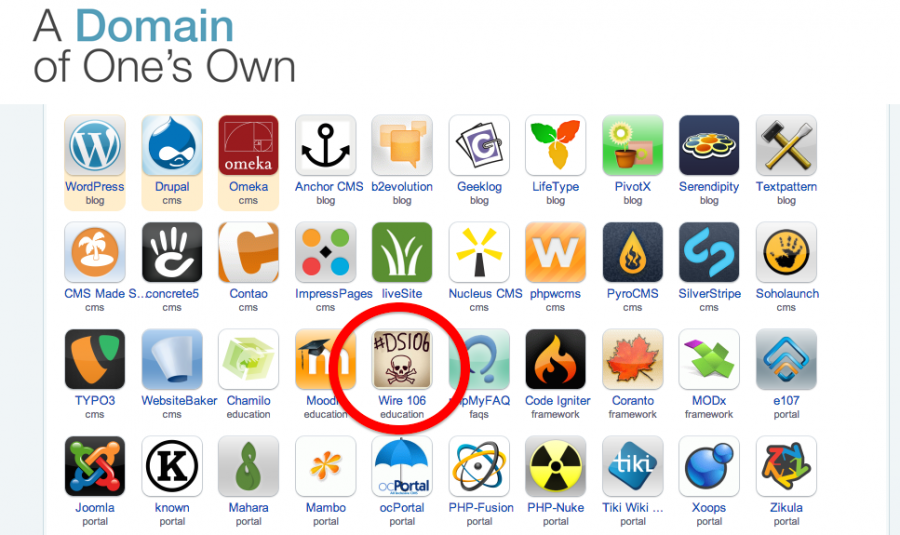 Custom wire106 Known package in Domain of One’s Own

Once students get a domain and web hosting for wire106, they will already have setup a WordPress blog (more on the integration between WordPress and Known in another post). During week 2, they will be asked to setup their Known site. As you can see from the image above, Tim Owens has made a course specific instance on UMW Domains through Installatron that automatically connects the students’ Known instances with the wire106 Known hub. The hub is a centralized Known site that will provide a seamless authentication process for the various social media and blog APIs the class has already set up and will integrate with Known. 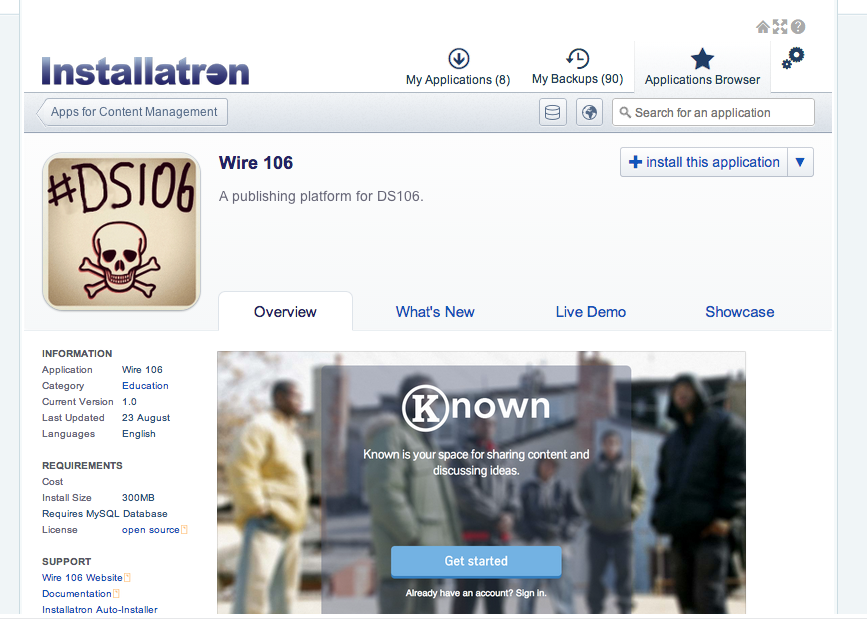 As you might infer, this is one of the sick parts of having UMW Domains happening. We can roll something like this out in moments. What’s more, we can customize Known hubs like this for any interested faculty on campus. This  not only provides us a space for experimenting, but it can scale very quickly for the entire campus if need be. I’m not sure the edtech field has woken up to just how powerful having a platform like UMW Domains can be. They’re still chasing their tail at Davos in the Desert. 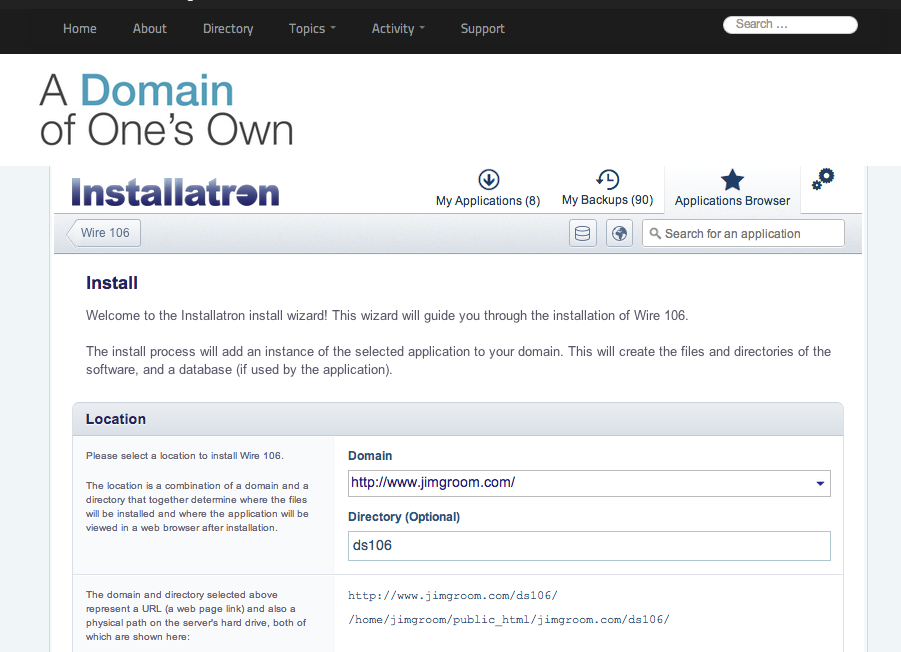 Installing Known in a subdirectory (or subdomain) on UMW Domains

Once it’s installed, you can click on the main URL.

The following splash page gets you started setting up Known, and from here it’s pretty remarkable how slick the setup is. 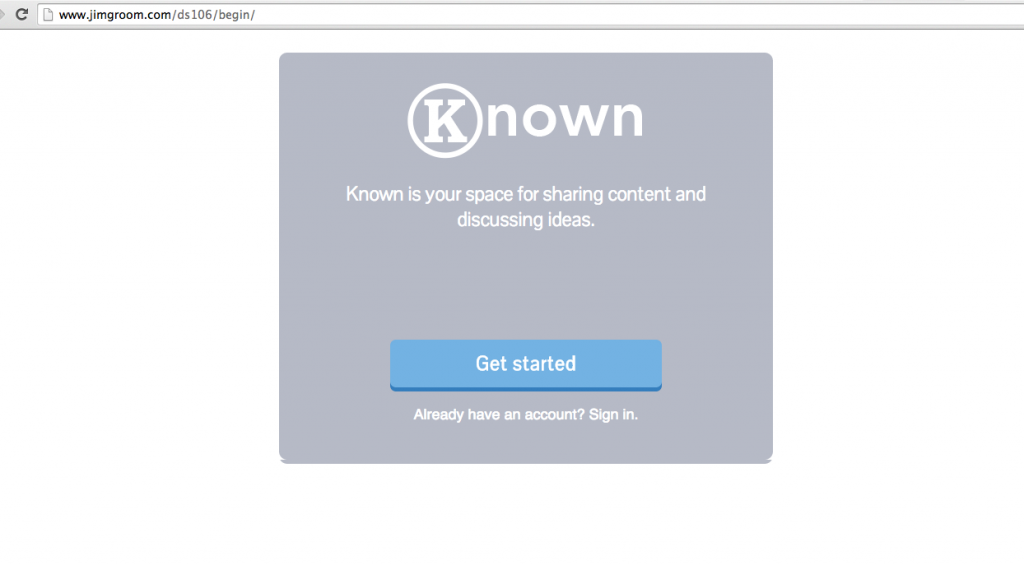 You fill out a profile, add an image, your name, brief bio, and URL. 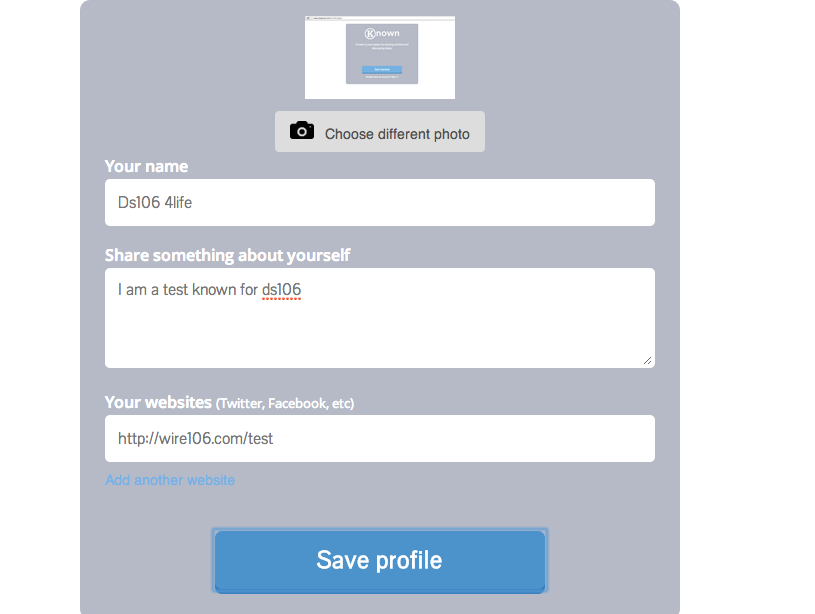 After that, you are given links to four different social media sites: Twitter, Flickr, Facebook, and SoundCloud. What’s amazing is how simple they are to authenticate via OAuth. After that, everything you do on the Known site can be sent to any of these sites. 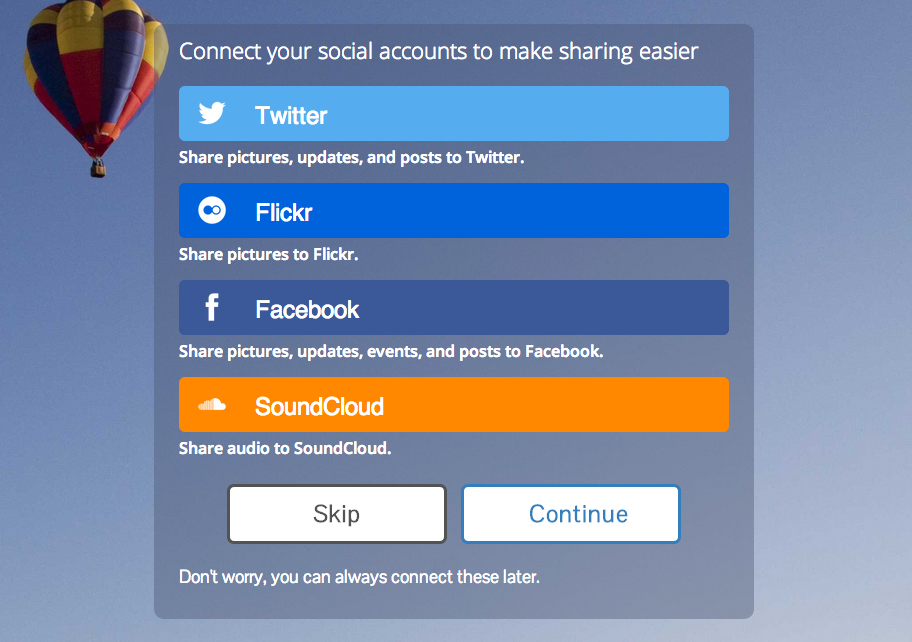 And finally, here is the interface you see after you’ve on-boarded. The icons are for posting updates, photos, posts, audio, etc.

Now, the #wire106 specific Known will have a “Wire 106 Hub” button underneath the status update so students can send it to any combination of Twitter, Facebook, and the wire 106 hub, or none of them.

And, like a good push-based technology, that update syndicates to the Wire106 hub immediately. And without any RSS herding, discovery, or pulling. It’s a brave new world. 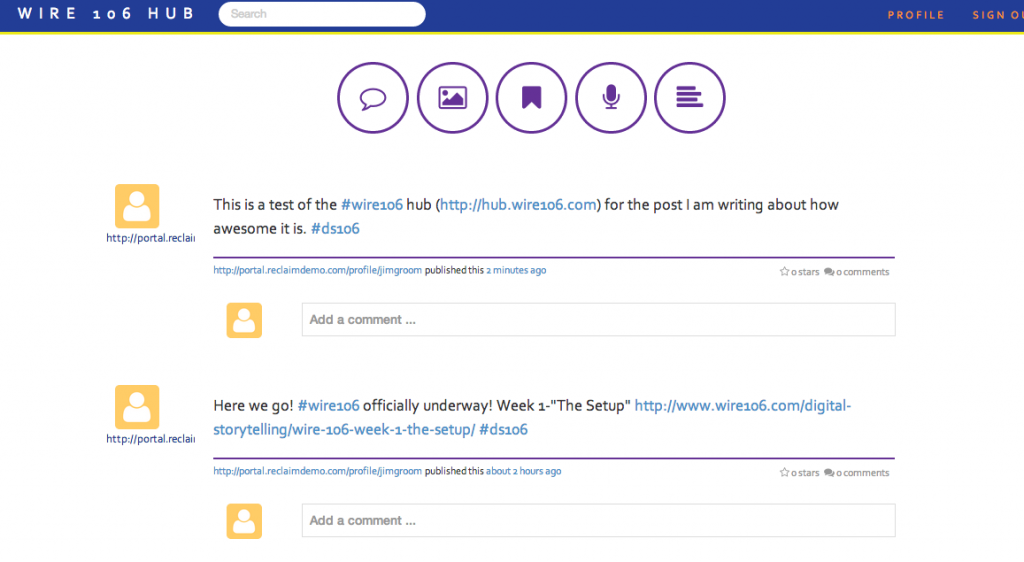 Now, it’s great to have a syndication hub, but even better would be a Tumblr-like reader built-in collecting everything folks have posted for the class, preferably broken down by photos, updates, posts, etc. That’s what Ben and Erin are working on for this week, and below is a mock-up: 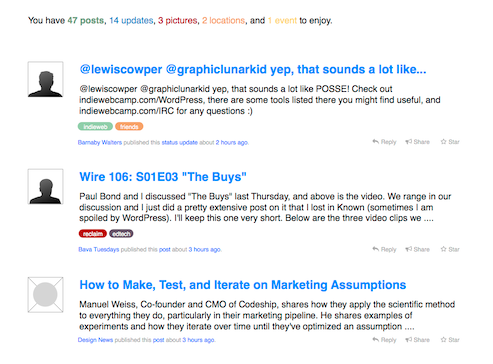 I have to note that Ben and Erin have been amazing working with us to explore what’s possible. They’ve been getting these features developed seemingly overnight. What’s more, Tim has been testing and packaging them up for UMW Domains just as fast as they can send them. It’s so cool to see what we’ve been waiting for for years in terms of clean and easy course syndication come together in days. And, as usual, amazing faculty at UMW like Zach Whalen have already gotten wind and are ready to take the leap this semester. This is going to be fun. We’re instructional technologists, this is the job. Let’s do it.

8 Responses to Pushing the Known Syndication Hub Beyond RSS