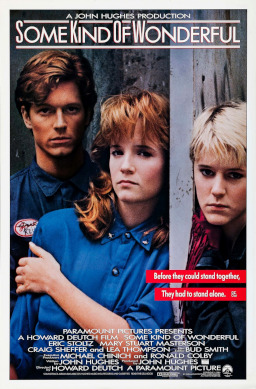 Well, when the clock strikes midnight the New Year will be upon us, and it’s a particular one for me because 20 years ago this year I will have graduated high school. I really don’t have too many high school horror stories. I had my fair share of fun and disappointment in that prison, while managing to watch a ton of movies all the while. In fact, I think my high school years made sense to me because of all those 80s movies I watched on the family VCR.  And when in comes to dealing with high school and the concomitant friends, romantic relationships, sexuality, and identity crises, I think a good amount of teenagers during the 80s in the U.S. did much like me–they turned to John Hughes’s big five: Sixteen Candles, Pretty in Pink, Some Kind of Wonderful, The Breakfast Club, and Ferris Bueller’s Day Off.

In fact, I blame John Hughes for making me a hopeless romantic during those years, for innumerable fashion disasters, and for an unhealthy desire to see my high school start a Saturday detention.  Yet, I’d be remiss if I didn’t acknowledge how important films like Some Kind of Wonderful (my all time favorite high school film, and introduction to Elias Koteas) and Pretty in Pink were for me in the way they articulated and traced the implications of class and wealth in US high schools in ways few other directors have paid such close attention to before or since. But, the fact that these films were so popular brings up some larger questions about the hyper-individuality often associated with the 80s. If so many of us took our cues from the same, limited, mass-mediated cultural pool, how do we even begin to understand the idea of individuality?  I think this might be why music (particularly the splintering and redefining of the punk movement along with the explosion of rap) remains the most important cultural phenomenon of this decade alongside, and as an integral part of, the film industry.

So, as part of an on-going, half-assed commitment on the part of the bava to re-visit the impact of the VCR on 80s culture and directly address the intolerable injustice that haunts the middle class hallways throughout this entrenched nation,  I will take a close look at the history of high school films over this next year, using Hughes’s big 5 of the 80s as a starting point, but then working out from there in an arbitrary, whimsical manner and until September 12th, 2009—or the day of my 20 year high school reunion. I’ll be thinking through high school films as a very specific argument about issues surrounding education, class, gender, music, style and race—which is an absent presence throughout all Hughes’s high school films—during the 1980s. At the same time I’ll be wondering what life might look like as the future of education promises to change dramatically in the 21st century, so half nostalgia, half Nostradamus 🙂

As a primer, here is some required viewing I found on the internets:

A pretty amazing montage of scenes from the big five high films titled “Through the Eyes of John Hughes”:

A great, class-inspired moment of triumph as the poor kids overcome the rich in Some Kind of Wonderful, which may be read as an allegory for the mainstream media versus the bava

And I’ll throw in “Some Kind of Wonderful in a Nutshell” because the music in this one rocks 80s style: