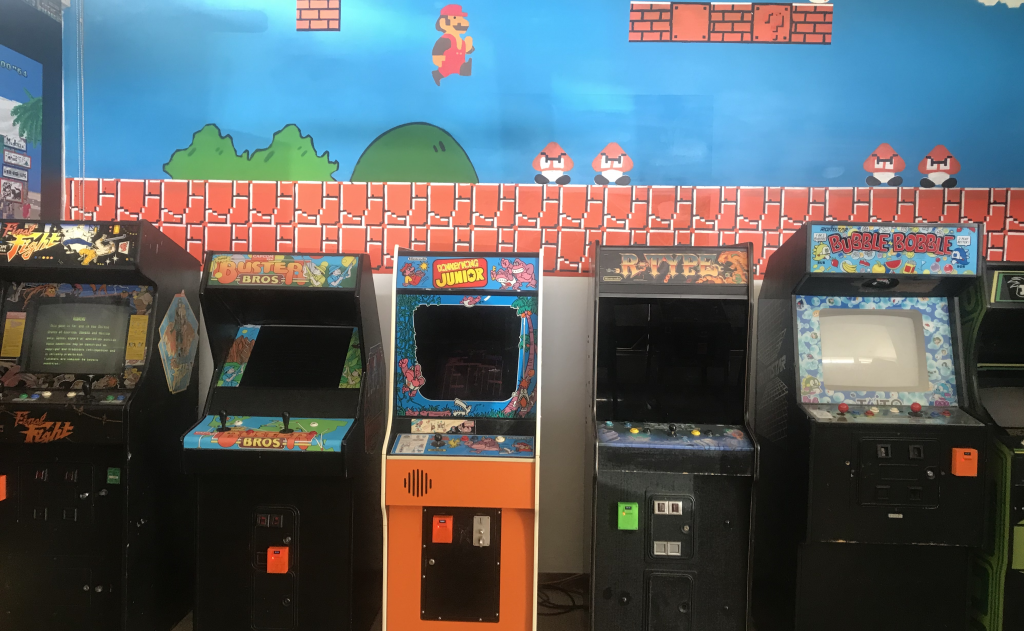 What is it Madonna famously said in the 1980s? Something like “Italians Do it Better”? Well, after visiting Antonio Nati’s Arcade Story just outside of Vicenza, Italy I might have an idea of what she was talking about. Antonio is one of those passionate people it’s hard not to become instantly a fan of, and the fact his passion just happens to be bringing 1980s US-style arcade games to Italy makes me even a bigger one. I discovered Antonio over a year or two ago when Knapp’s Arcade shared a post on Facebook about a pop-up arcade in Trentino.* Turns out Antonio’s mission is to bring the American arcade bar/restaurant mania to Italy with all the original furnishings.

Marquees on the wall at Arcade Story

This discovery coincides nicely with my settling in Italy for the foreseeable future and also purchasing my first game for the Italian arcade, the great Cheyenne, from Roberto in Torino. It became quickly apparent I was getting a different kind of virus, the Italian variant of arcade mania. Reclaim Arcade‘s early success has made me even more bully on exploring arcade options in Trento (even if it’s a private collection for now), so I decided to track down Antonio and find out what I could about customs, local laws, and more importantly start fostering connections. What I learned quickly in the US when building Reclaim Arcade with Tim was that the community around this hobby is crucial, and Antonio is a lynchpin over here in that regard (he has got near-on 40,000 fans/followers on Facebook cheering him along on the regular). Earlier this week I found his website and learned he had one of the games on my must-have list that I haven’t been able to score in the US: Scramble. 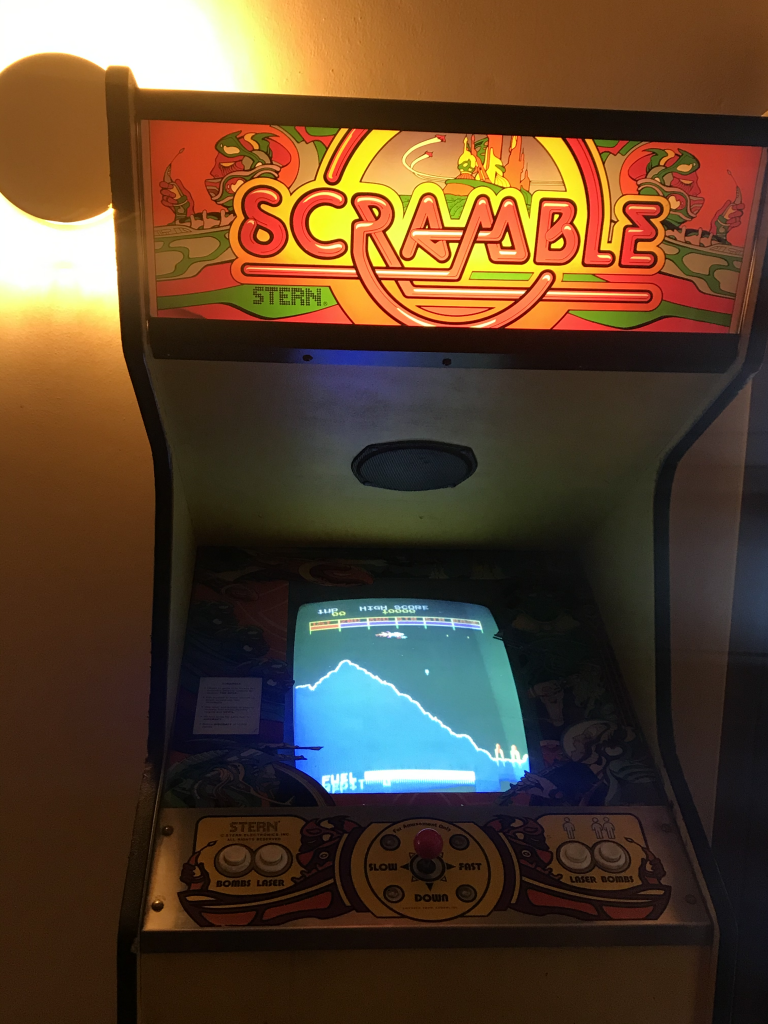 Scramble safe and sound in the foyer of the bavamansion!

So I bought it, dear reader, and as soon as the restrictions were lifted I went to pickup the game as an excuse to get an in-person experience of the warehouse where Antonio stores his games. I got a preview of it in the following video, but it seemed almost too good to be true—turns out it was even better than that.

My friend Andrea and I made the trip, and I spent the afternoon saying “Wow!” or “Amazing!” or “Awesome!” or “You have that game?!” etc. It was like walking into Nunley’s Amusements in Baldwin, Long Island circa 1980 and seeing Galaxian for the first time. Magic! 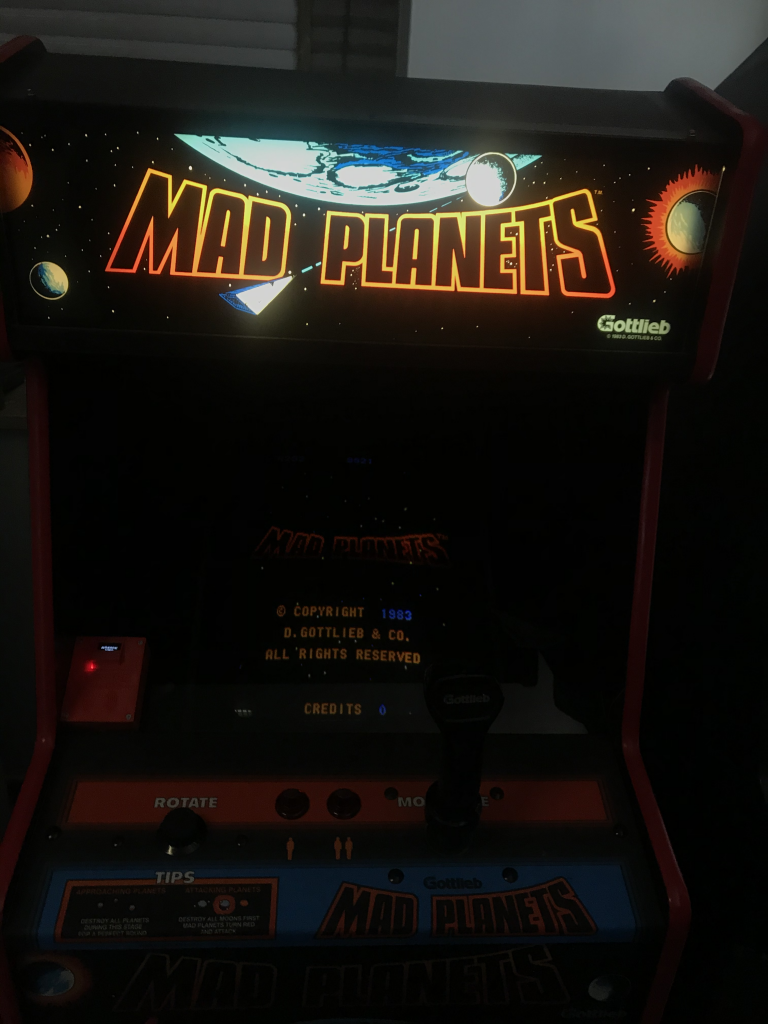 First time I played Mad Planets was in Italy, and now I need one

One of the games there that I heard a lot about but never played before was Mad Planets, and I have to say that is now on the must-have list. Amazing game play and super compelling controls, the other unique ones I played were Atari’s Quantum and Baby Pac-man‘s hybrid pinball/video game. 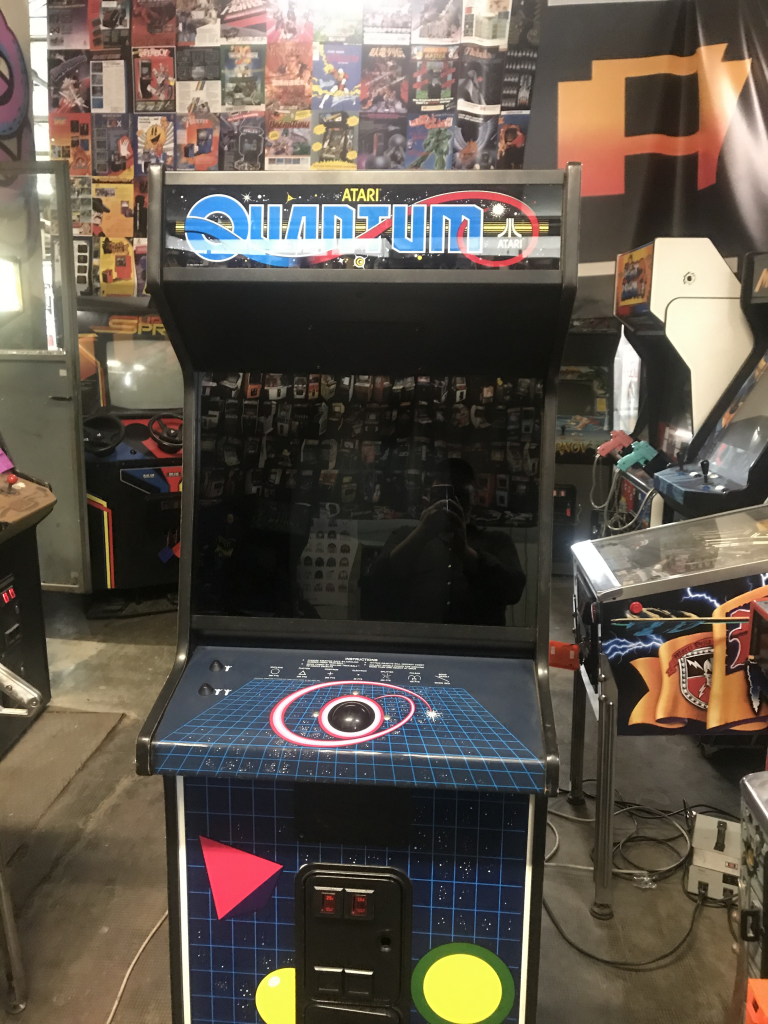 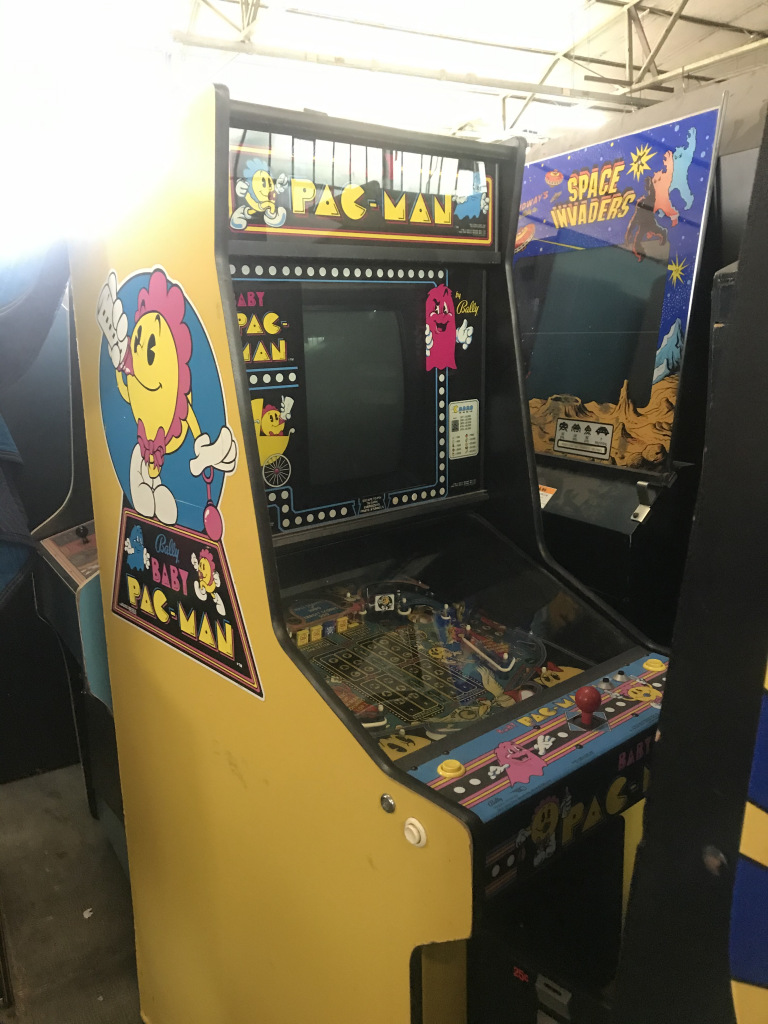 The hybrid pinball/videogame that is baby Pac-Man, that was a trip to play

I even played some OG Pac-man and was doing pretty well, but had to abandon it given Antonio was ready and willing to do a live broadcast of the visit he titled “Americans at the Arcade Story.”

Unfortunately I was the poveraccio stand-in for all Americans in this video, but Italians will take what they can get during a pandemic I guess 🙂 I enjoyed chatting with Antonio, and I tried to speak in Italian as much as possible. I’m somewhat understandable for Italians, and Antonella told me after watching it that if I would just conjugate a verb once in a while I’d be cooking with gas. Nonetheless, my enthusiasm for what Antonio and his team have built will hopefully help folks forgive (or at least ignore) my broken Italian. The video covers a lot of ground, but some highlights for me were the following: 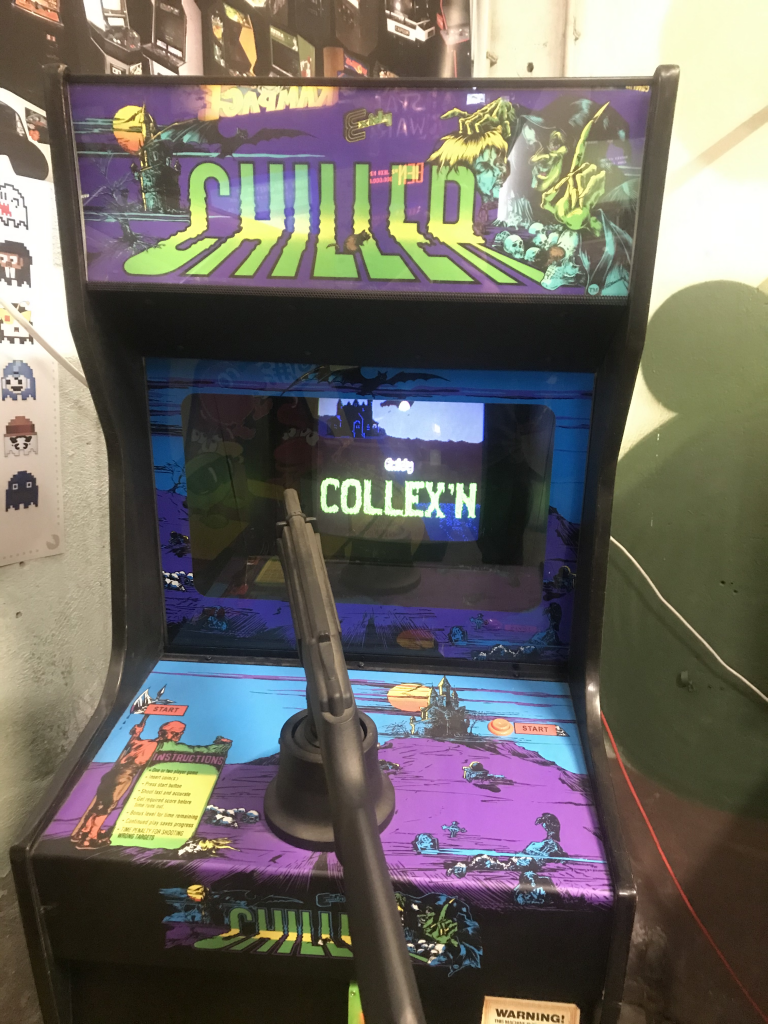 Hearing about someone in the US (possibly from Maine) who created a multi-game ROM extension for an Exidy Cheyenne PCB that allows you to play 8 Exidy games, including Cheyenne, Chiller, and Crossbow to name a few classic Exidy titles. Antonio showed me his Chiller cabinet with this modified PCB and it was just one of really cool things Antonio has been part of. I mean he is all in, and I love folks who are committed! 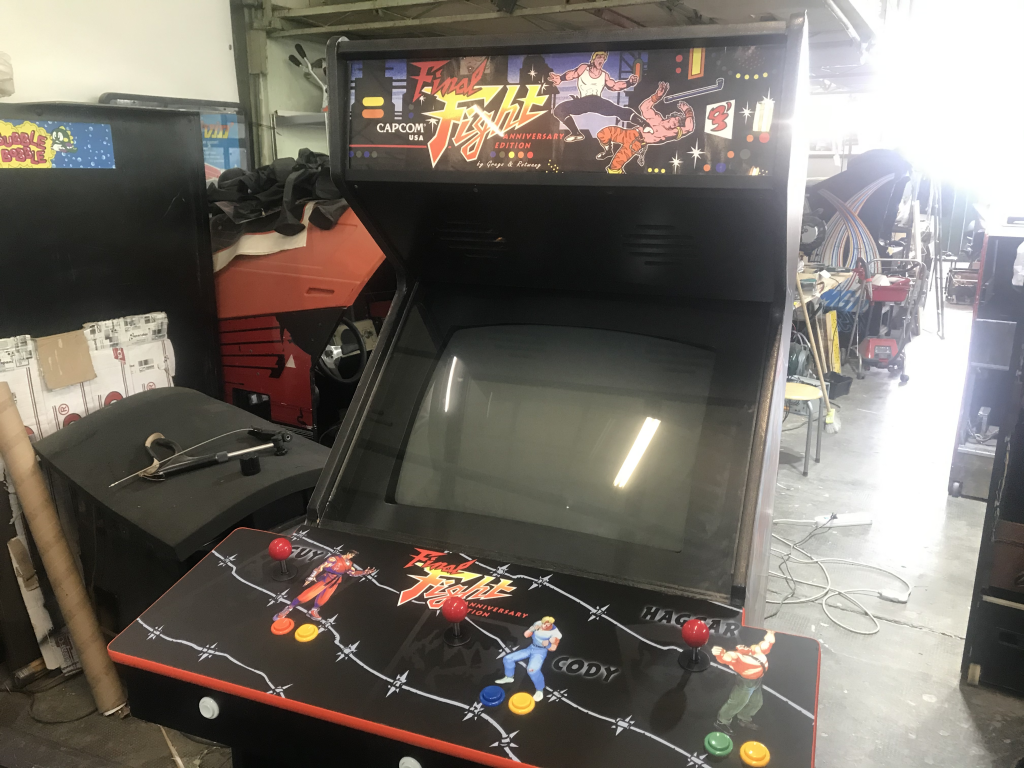 A good example of this was the fact Andrea and Antonio had just finished a 3-player Final Fight game, a modification dreamed up and shared by Grego and Rotwang on the web. Pretty cool stuff, and Arcade Story are the only ones in the world who have this game on a cabinet that is not emulated, but using an original card. I love it cause it’s not a mausoleum for these old games, but rather a place that is actively breathing new life into them viz-a-viz a vibrant online community of hackers and modders who want to build on this rich tradition of video gaming in pretty fascinating ways. 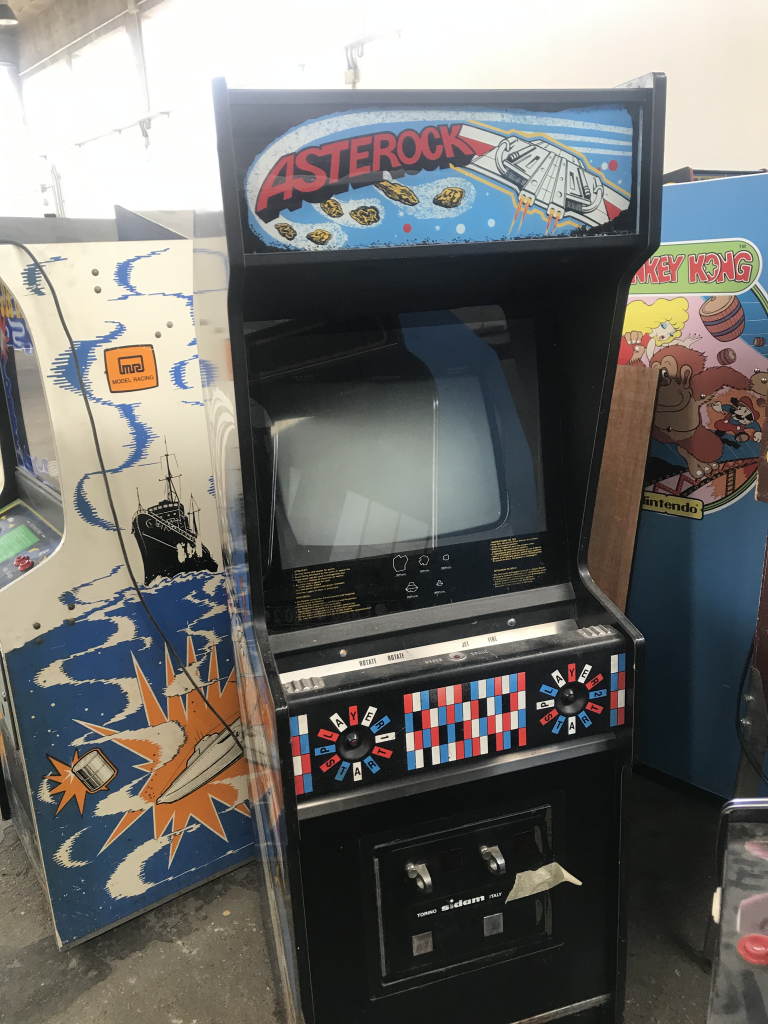 Another highlight was seeing Asterock, an Asteroids bootleg made by Italian game maker Sidam. It’s a straight-up rip-off of Asteroids, and Atari eventually sued the company for copyright infringement. One of the things I dug about this game was the way the controls are sunk and inverted into the control panel. It’s  an interesting design, and I really wanted to test them out to see how they play, maybe next time. 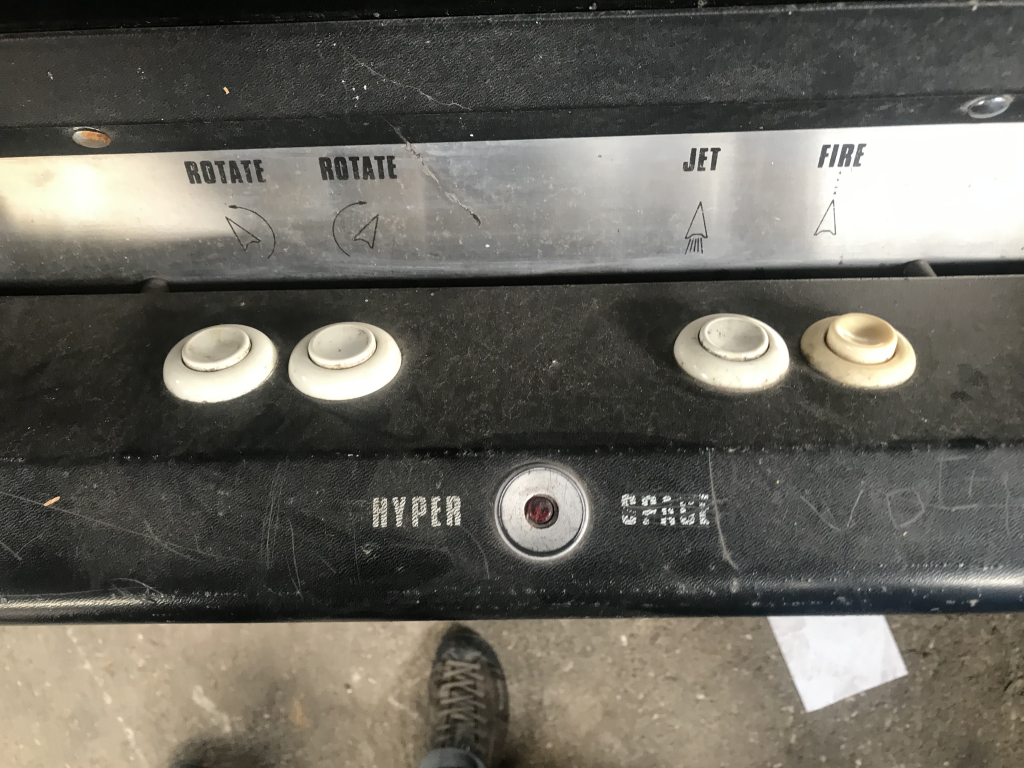 Sidam also worked with Atari to distribute Cinematronics laser disc games such as Dragon’s Lair and Space Ace in Italy. Antonio had quite a few of these cabinets (he said he has over 400 cabinets in total, and I believe it) and I was struck by one particular cabinet that had two monitors. One for the player, and another for the rest of the arcade to watch them play. It points to old school arcade gameplay as a kind of spectator sport since the 1980s, and also highlights the fact like games like Dragon’s Lair were in many ways more art than actual good gameplay. Turns out watching Dirk die in a 1000 creative, animated ways was compelling content. 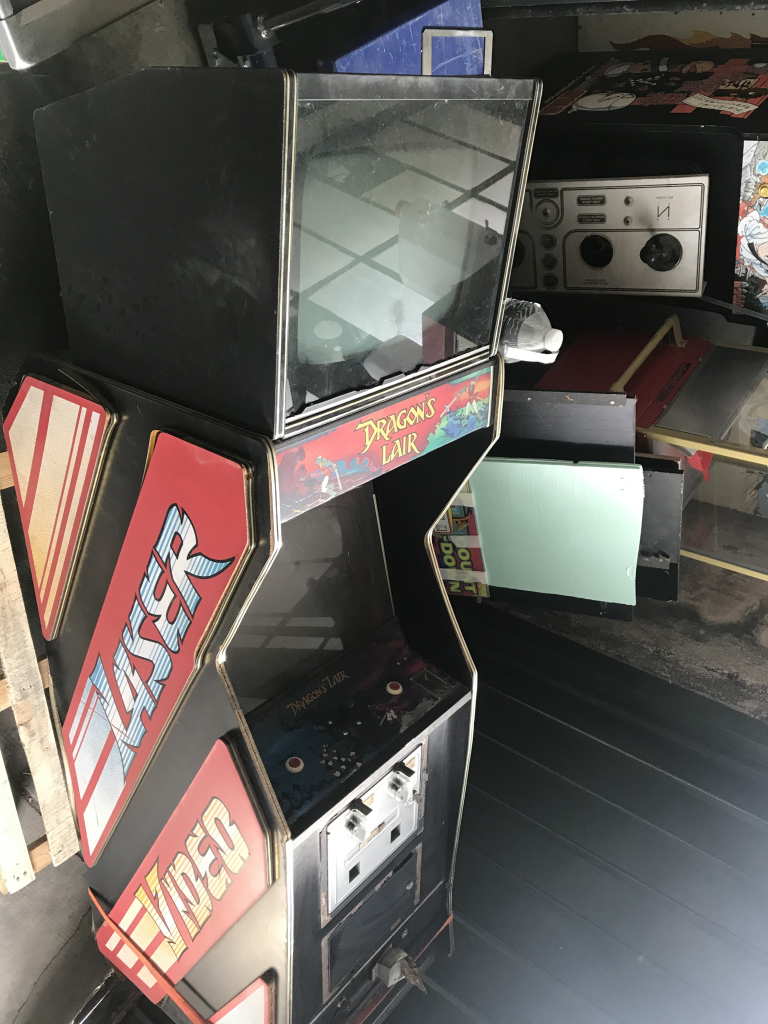 A Sidam distributed Dragon’s Lair with two monitors, one for the player and another up-high for the spectators

And that’s just some of the highlights, to try and list them all would mean this post would never be finished. But, long story short, the Arcade Story rules and the sooner these games get out of the warehouse and into an arcade near you and me the better for everyone

Also, while speaking of collections and arcades, I now have an arcade of two games here in Italy thanks to Antonio selling me Scramble. What’s more, there are now quite a few more back in Virginia waiting to be shipped. In fact, while I was visiting Arcade Story there was a delivery back in Fredericksburg of a Galaxian and Defender I secured to make the long journey back to Italia. 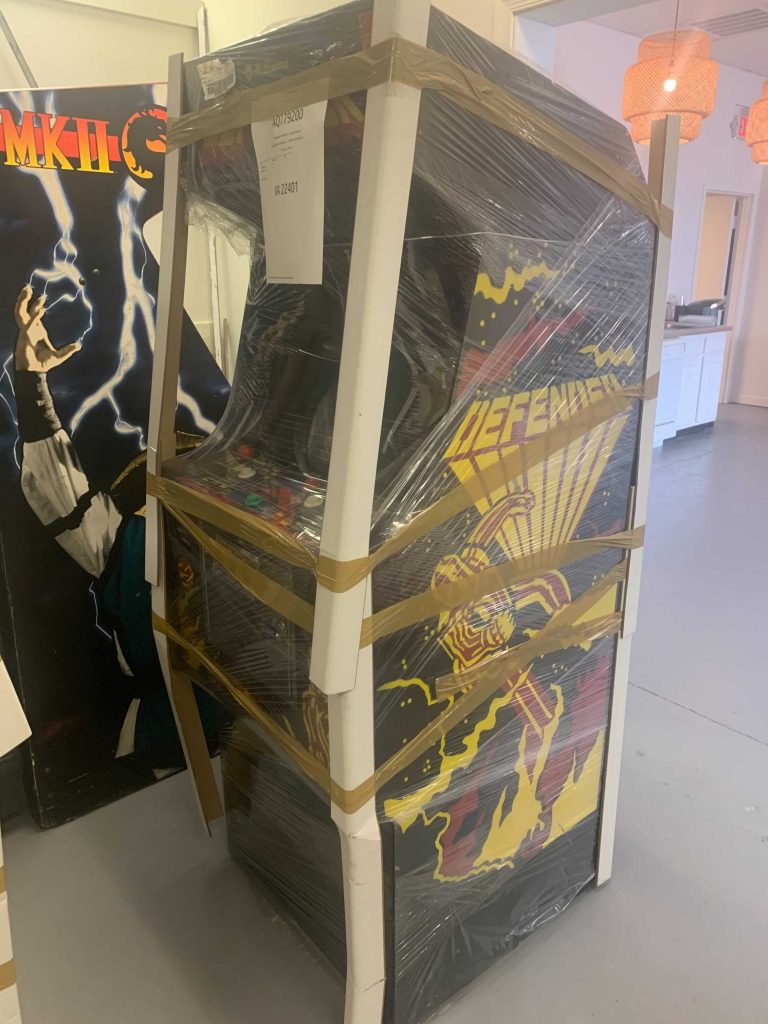 Defender arrived yesterday, making that yet another fine addition to the bavacade in Italy 🙂 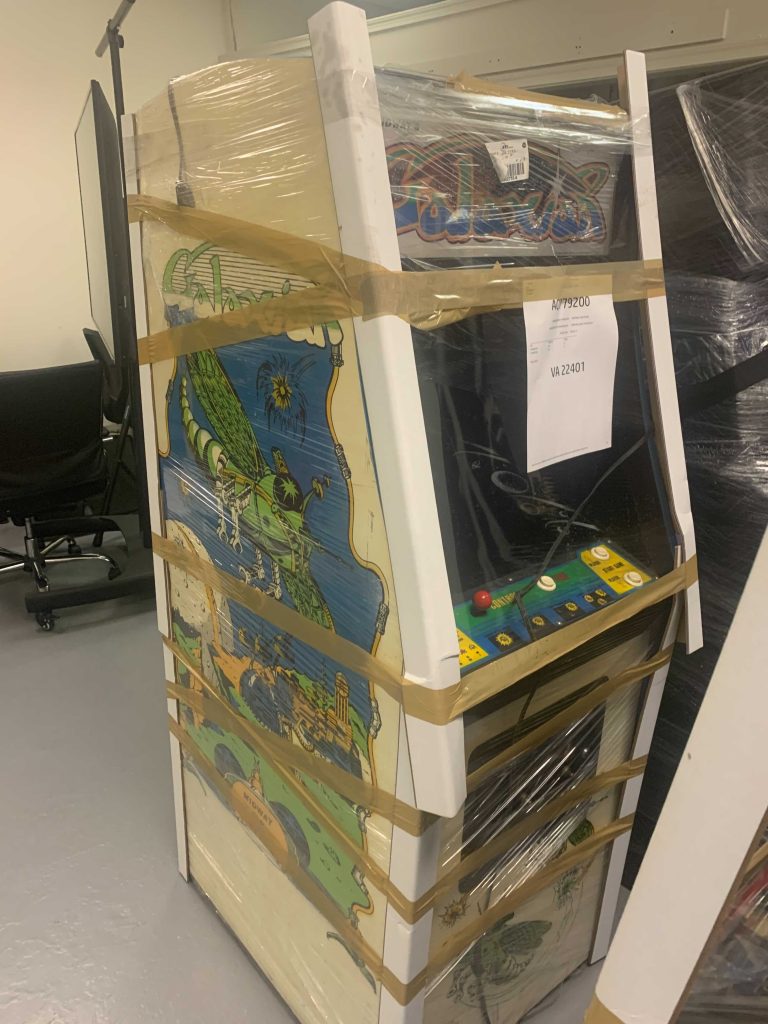 Galaxian brought some real color to the collection, one of the first games for the Reclaim Arcade and bavacade collections

I think at this point the bavacade Italia is approaching 10 titles if we include these two (Defender and Galaxian), the Pac-Man and Joust I bought a few weeks back, the Cheyenne and Scramble already at the house, one of the two Gyruss cabinets at Reclaim Arcade, the Pleiades cocktail still on Long Island, and possibly the Pengo and World of Wor I bought at Xmas time (or a similar combo of games). I’ll have to figure out details with Tim given Reclaim Arcade takes precedence, but the personal collection is coming up on double digits already! And now that there are 400+ cabinets sitting in the Arcade Story warehouse just an hour and a half away, things just got very dangerous here!

*Hat tip to Tim for sharing this with me a while back and then re-finding it more recently when I couldn’t for the life of me. I think his pay dirt search term was for my comment “f**king Italians!” 🙂

2 Responses to An American Arcade in Italy: Arcade Story