An Impressionistic History of Skateboarding, Part 2

Sparked on by encouragement from the great Brad Efford, I decided to finally finish up part 2 of my impressionistic history of Skateboarding series which has been neglected for more than eight months now. If nothing else, I figure part 1 won’t be so lonely anymore and yet another abandoned blog draft will be set free.

Skating in the 1980s was predominated by vert skatng, whether it be pools, half-pipes, quarter pipes, or small launch ramps. And while everyone vaguely recognized that the freestyle stuff Rodney Mullen was doing was re-inventing skating for the street (check this video out see just how amazing he was and is), I’m not sure that many kids at the time were that interested. In fact, street skating (as opposed to freestyle) didn’t really emerge as a popular alternative to ramps and pools until later in the decade. To quote Wikipedia’s Skateboarding article:

Since few skateparks were available to skaters at this time, street skating pushed skaters to seek out shopping centres and public and private property as their “spot” to skate. Public opposition, and the threat of lawsuits, forced businesses and property owners to ban skateboarding on their property. By 1992, only a small fraction of skateboarders remained as a highly technical version of street skating, combined with the decline of vert skating, produced a sport that lacked the mainstream appeal to attract new skaters.

It’s interesting that a series of forces came to re-frame skating in the early 90s as an outlawed, low-profile, and anarchic hobby, returning it in some ways back to the late 70s. The difficulty of accessing ramps or the resources to build your own given the risks of lawsuits meant that skating ultimately returned to the street—and that’s pretty much where it has remained ever since—despite the fact that during the mid-90s skate parks were being funded, built and maintained by local municipalities all over the country (fodder for part 3 of this history). An approach to skating as a community recognized sport that is a 180 degree shift from the vilified local response of towns and cities to skateboarders during most of the 80s. 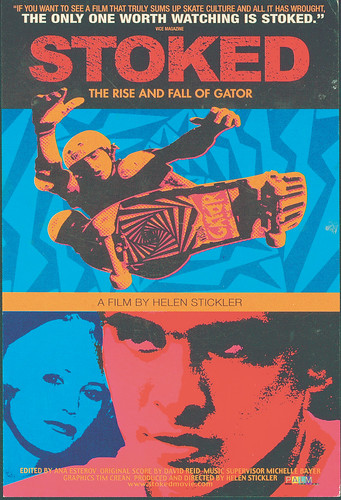 Peralta’s documentary Dogtown and Z-Boyz (2001) nails how skateboarding during the 70s was re-imagined by writers like C.R. Stecyk as an expression of a disenfranchised generation that transformed the existing urban spaces they inhabited into a canvas for the aggressive, momentary art they performed. As we move into the 1980s, we might be able to trace another shift that is framed powerfully in yet another documentary: Helen Stickler’s Stoked: The Rise and Fall of Gator (2004). This film examines the way in which the popular and commercialized era of vert skating transformed skateboarding from a kind of disorganized, anarchic collective of urban youth skating in backyards to a relatively organized, popular sport of cult celebrity. Stickler’s documentary examines Mark “Gator” Rogowski’s rise to cult stardom followed by his quick descent punctuated by a brutal murder. The film is an allegory that provides an interesting “sequel” to Dogtown and the Z-Boyz with a focus on the darker forces at work in the popularization and commercialization of skating. The clip below includes the first eight minutes of this documentary, featuring Gator on the phone from prison apologizing for the murder while examining the impact of skateboarding on his identity.

From Stoked: The Rise and Fall of Gator Rogowski

The documentary goes on to talk about the importance of image during the rise of the vert skating scene during the 80s. And for many this is most powerfully exemplified by Vision Street Wear, a subsidiary company of Vision Skateboards that mass marketed and mainstreamed the “alternative” qualities of skating which helped to turn it into more of a fad and popular trend than a transgressive youth movement (as John Hogan notes in the clip below, skating became somehow more palatable when it could be bought on the racks of Nordstroms). And during the mid to late 80s on just about every street corner you could see a white, red, and black Vision Street Wear shirt which was not only ugly, but all too often a sure fire sign of who was and wasn’t a skater. 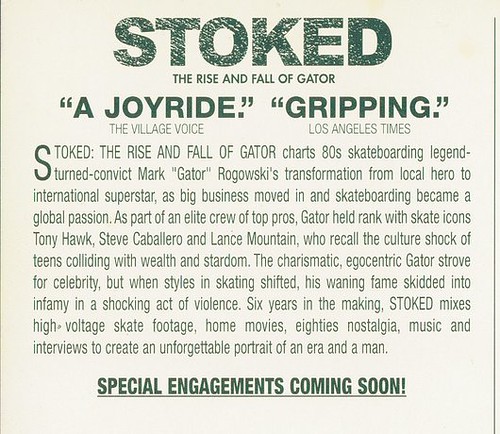 Stoked frames the commercialization of skating in the 80s and the exploitation of style and the cult of personality. The clip from the documentary below traces a commodification of the dissent during the mid to late 80s that had distinguished skating during the late 70s and early 80s. As the great Steve Cabellero notes in this clip: the Vision skate team had money, backing, and success, but provided its skaters will little or no guidance. A telling remark that Vision was a parasitic enterprise that was more concerned with exploiting the sport for money than fostering the people that where making it for them.

From Stoked: The Rise and Fall of Gator

And as an added bonus, here is a Vision Street Wear TV Commercial from the mid to late 80s, I include it just so that you can get the full effect 🙂

But it would be unfair to focus entirely on Vision and Gator here to characterize skate teams and skaters during the 80s. For teams like the Bones Brigade, under the tutelage and direction of Stacy Peralta, was the most important and exciting group of skaters during this period. And Peralta himself was not only one of the sports earlier heroes, but he moved smoothly into the position of championing the sport while at the same time carefully documenting its history. In fact, my own history of skateboarding might be traced alongside Peralta’s early use of low-budget videos to popularize the sport. During the early 80s (circa 81 or 82) my brother and I built or first half-pipe, which was terrible but fun nonetheless. Yet, we didn’t really start skating until we starting building our second half-pipe which we finished in 1983, right around the time we got our first VCR, which immediately introduced us to the world of skate videos. These low budget videos, often no more than 30 minutes, opened up a powerful lens on the world and art of skating for us.

While we regularly read Thrasher and Transworld, video opened up some new possibilities for seeing and studying the tricks and getting a sense of each skaters individual style. In this regard, the VHS tape was truly amazing. We lived on Long Island, far, far away from the skating center of the world in Southern California. The skate scene in New York was somewhat smaller and quieter, even though there were local spots in the city like the Brooklyn Banks that were relatively famous and made all the better when kids started telling stories about NYC legend Harry Jumonji (who back in the day was said to be able to ollie a trash can, which was nothing short of amazing to me). Nonetheless, there was no infrastructure of skate parks and ramps like they had in California with the likes of Del Mar and Upland, or even in place like Virginia Beach with Mt Trashmore or the metal half-pipe in Texas (can’t remember the name). So video was our way of living vicariously though that scene, and we would watch them over and over to see how they did the tricks. So, like any good piece of nostalgia worth its salt, by memory of skating is deeply dependent on videos, and the video that has stuck with me more than any other is the Bones Brigade Video Show (1984), which encapsulates the best elements of skating during the 80s, and makes for a great 30 minutes history.

The logic of the video is simple, it follows Lance Mountain around the streets of Los Angeles for a day. He travels around Santa Monica and Venice on his skateboard and his peregrinations give way to features all the Bones Brigade skaters as well as the popular forms of skating at the time. What’s most memorable about the video for me is Lance Mountain’s street skating journey, which is probably what is most laughable or forgettable for anyone who came to skating much later.

Part 1 of The Bones Brigade Video Show featuring Stacy Peralta taking a skateboard from a TV, and lance Mountain skating the streets and pools of LA:

For Mountain’s tricks would be considered basic by today’s standards, yet his aggressive style and fluid grace are what make him and Steve Caballero (along with Neil Blender) my favorite skaters of the period. And while Tony Hawk’s technical genius is undeniable (particularly at Del Mar in the end of part 3 and the beginning of part 4 of the videos below), his style back then was somewhat robotic (compare it with the grinding fluidity of Steve Steadham, who is the other skater in this scene).

Watching Steve Caballero, Mike McGill and Lance Mountain skate a half pipe in this video, particularly Caballero (see part 6), was certainly the highlight for me because they were teaching me how to skate my ramp. The focus was more about grinding the space and aestheticizing the tricks with power and style, rather than becoming too focused on the technical acrobatics that came to dominate the logic of vert skating throughout the decade with trick like the 540 and 720 aerials, which kinda of equated skating with high diving twists.

Now that scene may be four minutes of the best skateboarding ever: honest, aggro, and beautiful all at once. And more than that, it highlights the modest reality of a few skaters in their backyard (albeit these guys are professionals) skating within a communal space trying to encourage one another, push the envelope, and generally have fun. It was a scene and a moment I deeply identified with and tried to reproduce again and again in my own backyard (and on a few occasions with some moderate success).

If you skated during the 80s, then Chris Miller’s slam at Upland might be one of those terrible memories you keep with you.

7 Responses to An Impressionistic History of Skateboarding, Part 2