Last week I had the privilege of writing a recommendation for Michael Branson Smith to gain admission to the masters program in Interactive Data Visualization at the CUNY Graduate Center. And while I’m confident he will get into the program with or without my recommendation, I used the occasion to try and capture in some detail our collaborations over the last 10+ years because I think it captures some of the coolest work I have been involved with. I have said it before and I will say it again, collaborations have been everything since I saw the light with ds106, and they continue to be the magic that makes so many fun, cool things happen. While writing this I realized just how MBS’s vision has enriched so many of my projects, and how I kept coming back for more. Keep your enemies close, and keep the artists even closer! So, here is a record of my letter of recommendation for MBS, who I have no doubt will continue to do amazing things with or without me or a degree, but why not both anyway? 🙂

To the admissions committee:

I think the hardest thing about writing this recommendation will be trying to reign in the endless superlatives that come to mind when discussing Michael Branson Smith’s (MBS) seemingly endless stream of creative genius—there I go already—in the more than ten years I have had the privilege to collaborate with him on a wide range of projects. Given this is a recommendation for a graduate-level course of study, I will try and touch on numerous projects to not only give you a sense of the breath of MBS’s work, but also reinforce how much it has consistently been building towards the project he will be focusing on as a part of your program.

It was during my time as Executive Director of Teaching and Learning Technologies at the University of Mary Washington (UMW) when I first came into contact with MBS. It was the Spring of 2011 and the open, online course Digital Storytelling 106, often referred to as ds106 (http://ds106.us), was being taught at UMW as a possible vision of a forward-thinking model for online learning premised on networked communities of practice and learning. As founding faculty member of the Communication Technologies program at York College, MBS integrated his introductory level courses into this distributed network of digital storytelling as a means to rethink the ways in which the students grappled with the emerging realities of digital literacy and identity, placing him at the forefront of an avante garde of educational technologists and educators attempting to grapple with the impact these emergent web forms are having on teaching and learning.

His work in ds106 led to a string of generative projects wherein he was learning and building right alongside his students—arguably the most honorable of pedagogical traits. His art training in many ways defined the aesthetic of ds106 when it came to the emergent reclamation of the GIF as web artform. I very much consider MBS a GIF artist, amongst other things, and his Hitchcock Animated Movie Posters speak to that more precisely than I ever could (https://www.michaelbransonsmith.net/blog/alfred-hitchcock-film-posters-animated/). But beyond his early vision for the GIF as art, he also understood the form as integral to a deeper appreciation and study of film as medium. He saw the GIF as a tool that could be used by faculty and students alike to capture and linger on certain moments of film that can be read more closely as a result of the technology, and in many ways this attribute might be what is most remarkable to me about MBS, namely his ability to simultaneously fuse his art, pedagogy, and research.

In the Spring of 2015 our creative collaborations continued, but this time moving from the future of teaching and learning with virtual communities like ds106 to the past in the form of a 1980s Console Living Room exhibit (http://consolelivingroom.net) at UMW. This reproduction of a 1980s living room, replete with period-specific furniture and technology, placed within the context of a newly opened, state-of-the-art Technology Convergence Center as a way to connect the technology of the early 21st century with that of a particular moment in the rise of game consoles, video home entertainment systems, and network television. MBS’s contribution to the exhibit was both the vision and expertise to program an entire day’s worth of network television (importantly including period specific commercials) that would then, using a combination of Raspberry Pi savvy and short range television frequency know-how, broadcast over-the-air to numerous televisions in the exhibit space simultaneously.

It was the finishing touch that truly brought the entire exhibit to life by underscoring the dominance of network television in the living room of the mid 1980s as well as reminding us of the power of wifi analog broadcasting spectrums that have all but been converted to digital. MBS wrote extensively about his development of this project on his blog, and it is well worth a read for a deeper looking into both his creative and technical process: https://www.michaelbransonsmith.net/blog/an-mbs-special-presentation/

Our next collaboration in 2018 on the Reclaim Video (http://reclaimvideo.com) site was interesting because it captures MBS’s transition towards deeply sharpening his programming skills in HTML, CSS, and Javascript (HTML/CSS/JS), which was in line with his shifting focus from teaching ds106 to building the core coding competencies for the Communication Technologies program at York College. This project was in many ways an extension of the Console Living Room, but this time a re-creation of a 1980s video rental store called Reclaim Video. We enlisted MBS to design the site and his work at this time foreshadows the time-based/scheduling work he would do with the Youtube API for the OERxDomains21 conference site, but more on that soon.

I think this example is important not only because it highlights his ridiculously gorgeous animated movie posters as well as  his brilliant sense of design, but also a moment wherein he starts to dig deeper into the coding which would be a multi-year odyssey to not only make the academic program at York College that much better, but also to prepare for the work that would ultimately lead him to applying to the Grad Center. In fact, I wrote extensively about this project in a post titled “A MBS Special presentation at Reclaim Video” (https://bavatuesdays.com/a-mbs-special-presentation-at-reclaim-video/), and it might be of note here given it is also the first time I heard MBS discuss his broader vision for the subtitle, dialogue analysis project he hopes to work on as part of the Interactive Data Visualization program.

MBS’s deep dive into HTML/CSS/JS would result in an interesting return to his animated movie posters from many years earlier with a remarkable twist: shifting the animation from the format of the GIF image to the underlying code of the website, namely CSS. It’s both a literal and metaphoric transition of MBS’s art from primarily that of the image to that of the underlying code that makes the image possible. It is a journey to the center of an aesthetic, and I have to say his code-based animated movie posters are some of the most brilliant examples of CSS-based popular media art I have seen on the web. Take a look for yourself at his strictly CSS-based animated rendition of the Dr. Strangelove poster, and tell me I’m wrong: https://mbs.nyc/posters/dr-strangelove/ And if you want to hear more about the process, we recorded a video in 2020 wherein he discusses the detailed process of creating these posters purely from code: https://today.reclaimhosting.com/podcast/026-anatomy-of-css-animated-movie-posters/

Again, I point this out to highlight the amount of focused, self-taught design and programming skill that he has picked up during the more than 10 years I have had the privilege of working with him. 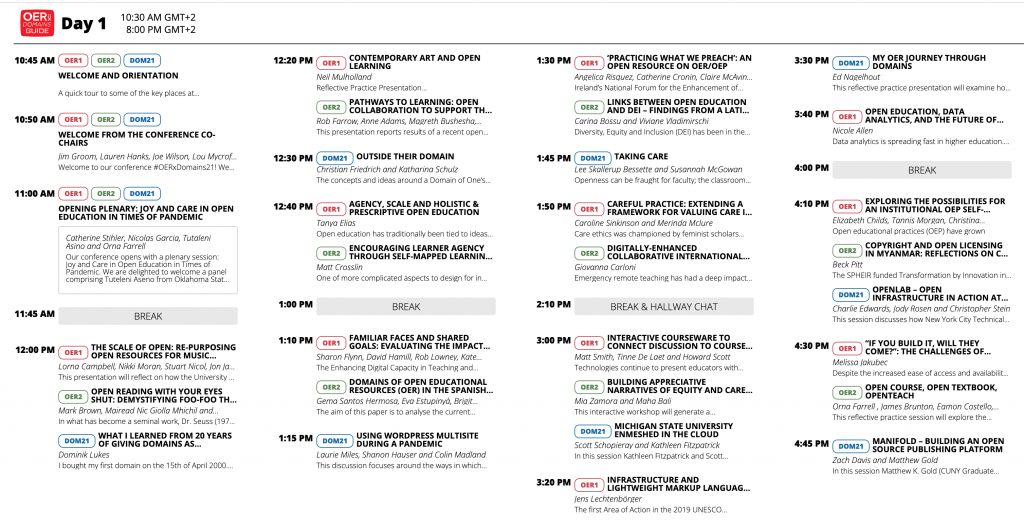 And while all of these projects speak volumes towards MBS’s qualifications for your program, I do think his work on the OERxDomains21 conference (https://oerxdomains21.org/day1.html, https://oerxdomains21.org/day2.html) highlights a unique synthesis of both his design and coding expertise in one innovative, elegant, and highly functional site—not to mention all accomplished under the duress of a ridiculously short deadline. The OERxDomains21 site was essentially the conference platform that used a TV Guide-inspired layout to drive a time-based program for integrating and playing both live and pre-recorded YouTube videos. And while all the data is entered using a WordPress site for session details, time, tracks, participants, video ID, etc., that information is being pulled in an HTML/CSS/JS frontend separate from WordPress (referred to as Headless WordPress) so that it could take advantage of a more sophisticated design that would allow for working with the YouTube API to ensure three separate channels of videos are playing across that platform simultaneously while ensuring that everyone is always able to sync at the same time to keep a consistent sense of “live” presence. It is effectively trying to realize the physical work of the Console Living Room project virtually for a conference site that is built around the idea of network television from another age. MBS describes his process with wrangling the YouTube API as well as wrapping his head around the challenges of temporality and timezones in order to build this platform in this post (https://www.michaelbransonsmith.net/blog/2021/04/29/this-is-temporal-experiment-number-one/), and to be honest it’s all quite complex to me, but what I can attest to as one of the conference organizers is that the experience was truly transformative as a means for delivering a simultaneously live and asynchronous event across multi-channels over the course of two days. So much so that both Reclaim Hosting, my humble organization, and the Association for Learning Technologists professional organization in the United Kingdom have continued to use this platform to deliver events since. 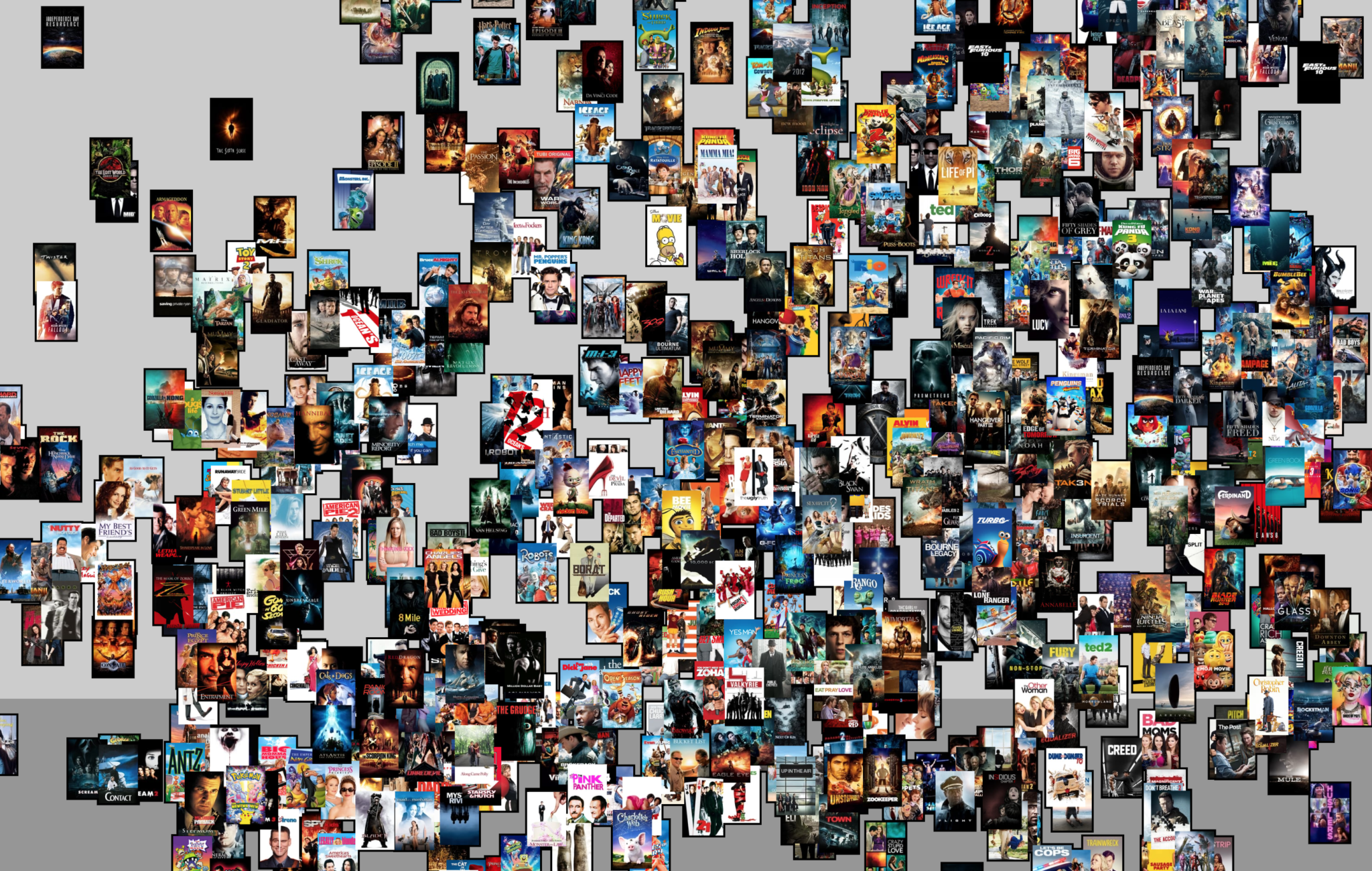 Last, but not least, I was thrilled to learn that MBS’s idea for building a tool for visualizing word diversity in top-grossing films found an outlet thanks to his participation in an Interactive Data Visualization course at the Graduate Center this Spring. It’s a project many years in the conceiving, and the fact MBS is further diving into javascript libraries and learning how to program in Python points to the further maturation and sharpening of an already remarkable set of skills. I’m sure your familiarity with this most recent work will be grounds enough for admission given his detailed and eminently achievable plans to further fine-tune his work to facet search by speaker and leverage existing tools to build a queryable API for searching dialogue represents an invaluable resource for visual media researchers. 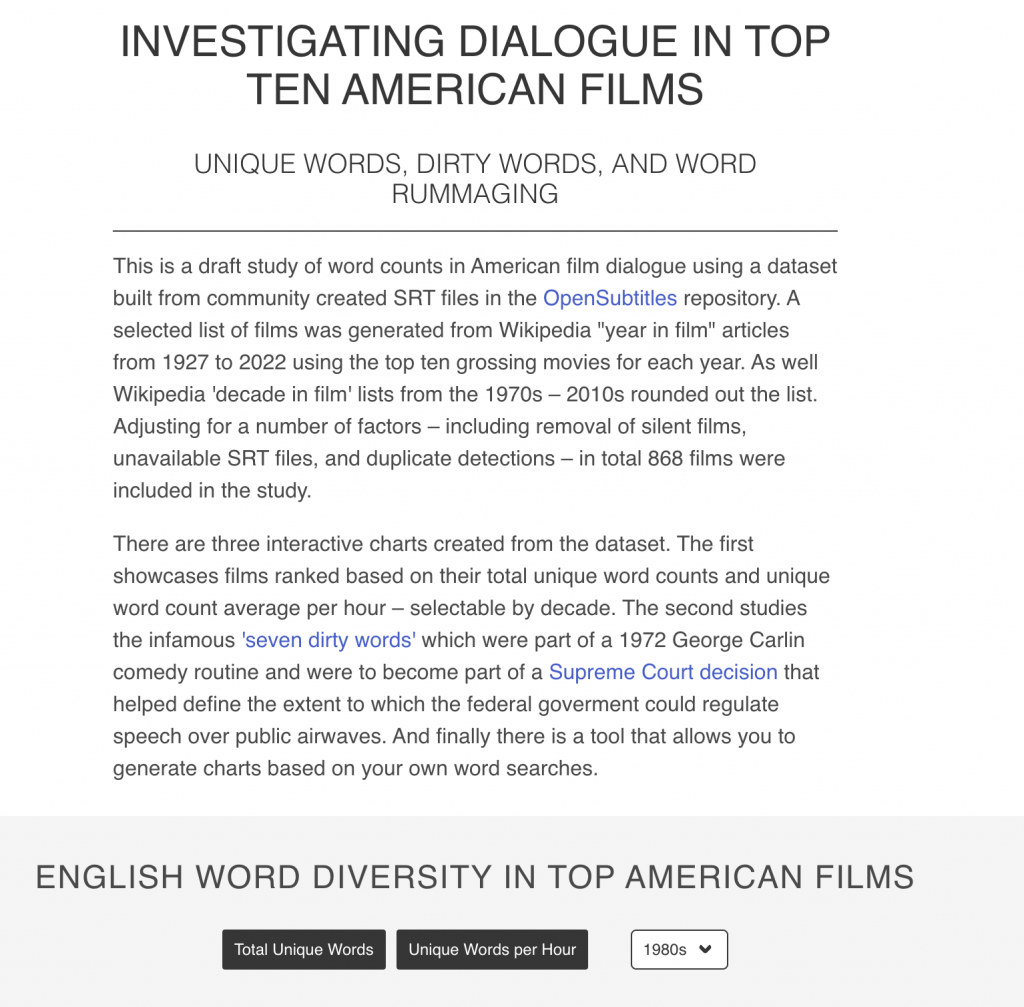 But for me the real reason to accept MBS into your program is his ongoing demonstration of marrying a strong will to learn the complex technical frameworks to build creative and compelling experiences in service of a broader vision of exploring the power of popular media to shape how we understand the particular “channel” of the world we are watching. I cannot recommend MBS for your program strongly enough, he is not only a talented artist, designer, and programmer, but also an absolute joy to collaborate with in every sense of that word. The Interactive Data Visualization program will be richer in every way as a result of his acceptance and matriculation.

4 Responses to A MBS Recommendation