Does 15 cabinets make an arcade?

I’ve been slow with the updates on the Reclaim Arcade collection, but that’s just because Tim’s acquisitions are outpacing my ability to blog them all. We are officially at 15 cabinets (counting Tim’s overhaul of Smash TV) which begs the question, do we have an arcade yet? I’m not sure what that magic number is precisely, but we are just about out of space in CoWork for the cabinets we have, which are as follows (in order of acquistition): 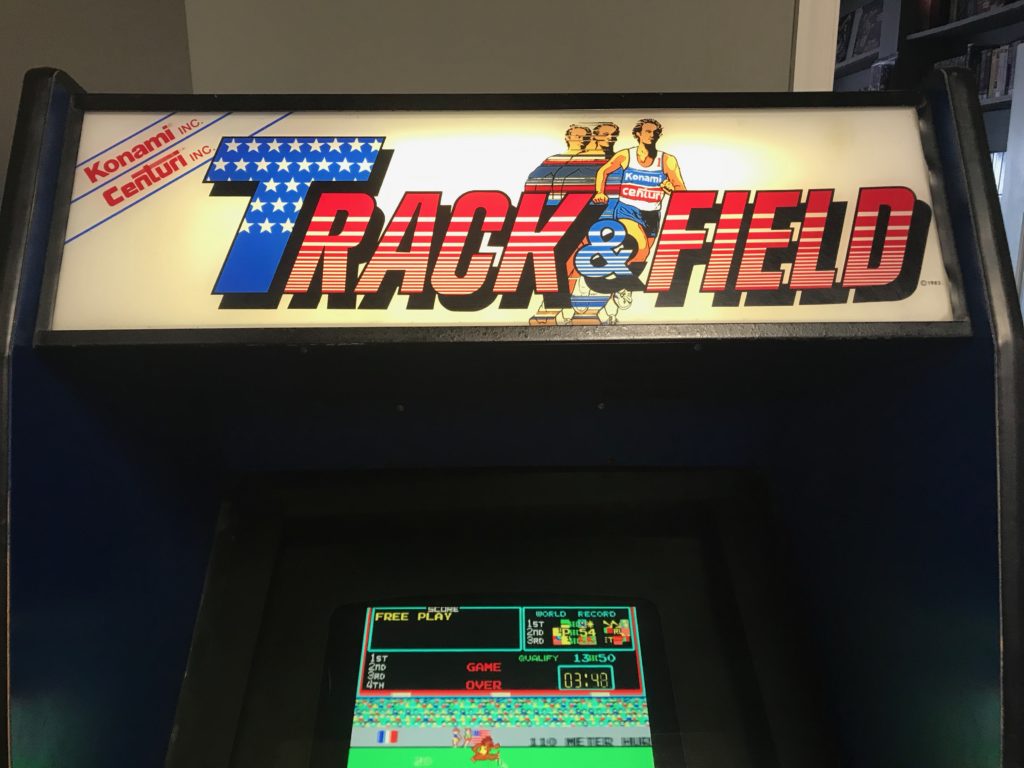 Track & Field is a 1983 video game that was leveraging the 1984 Summer Olympics in Los Angeles for its popularity. It is a fun, if not super hard, game wherein you have to mash buttons to run and then time the jump/throw degree which can be a real pain in the ass. 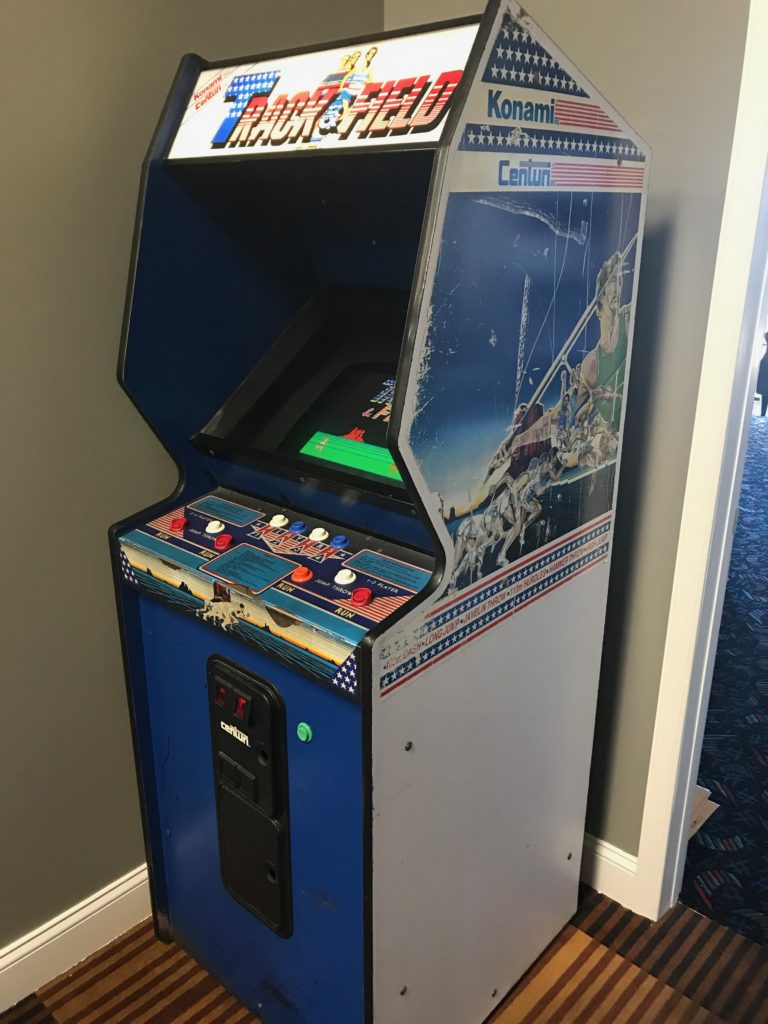 One of the run buttons has a kind of shield to make it that much harder, and it can be a game you walk away from in frustration if you are not careful. It is one of the games Tim and I playing in Oklahoma at Domains17 that kind of jump-started the arcade madness at Reclaim, and I do love it so. It will be forever connected with Grand Bald Pizzeria in Baldwin, Long Island for me, given I spent many a day trying to figure out the pole vault, which I can’t even get to anymore 🙁 This is the only game we have with an LCD monitor instead of a CRT. The price was right and it looks pretty good, but at some point this should be rectified. 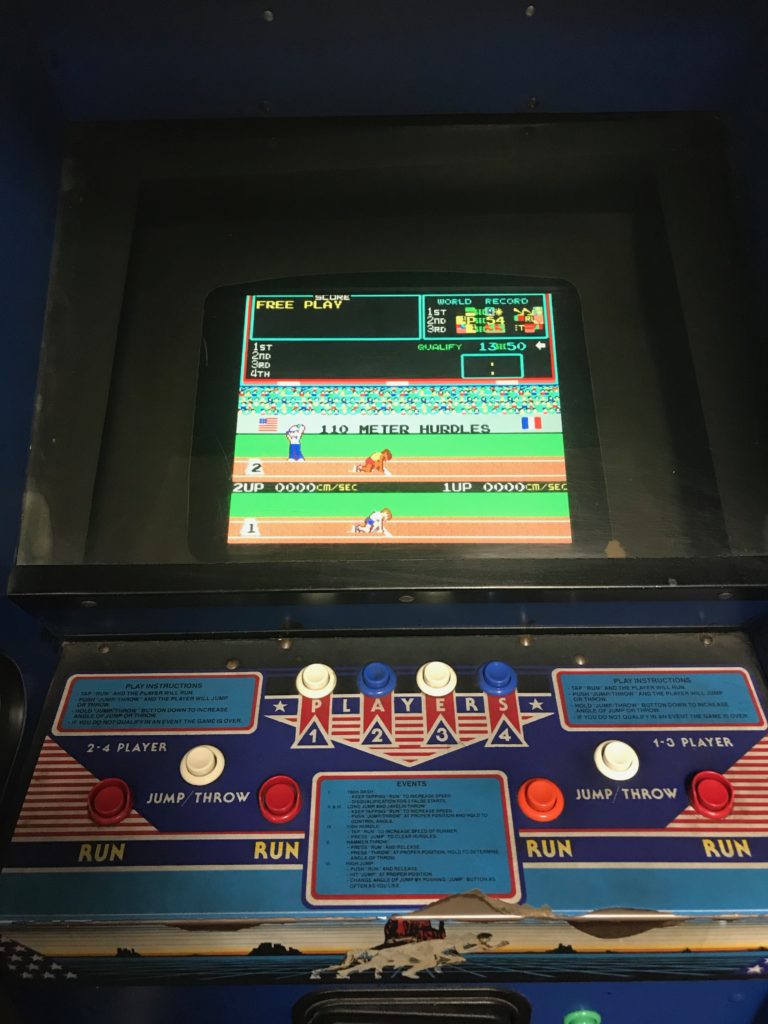 Just this past weekend Tim got his hands on a 1982 classic, Q*Bert. The cursing monster straight out of a Dr. Suess book that was a mainstay of any self-respecting arcade. The pyramid maze was unique, and the simplicity of the game play as well as the unique riffing on Pac-man was impressive. It was created by Gottlieb, a pinball manufacturer, that made just a couple of video arcade cabinets. 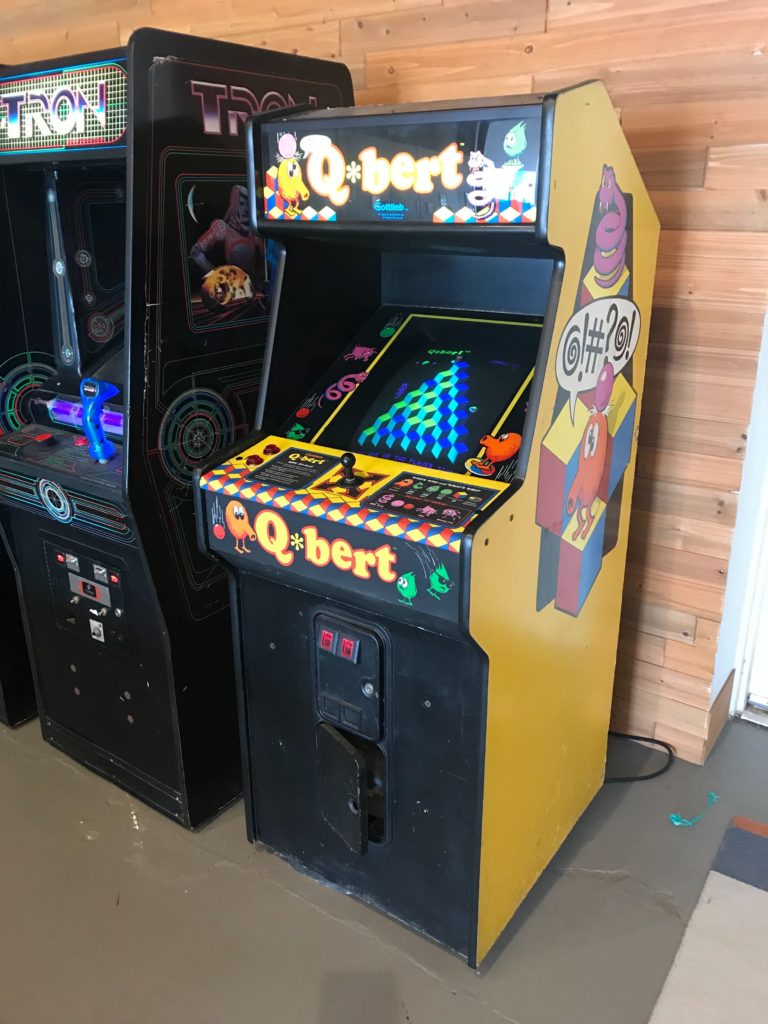 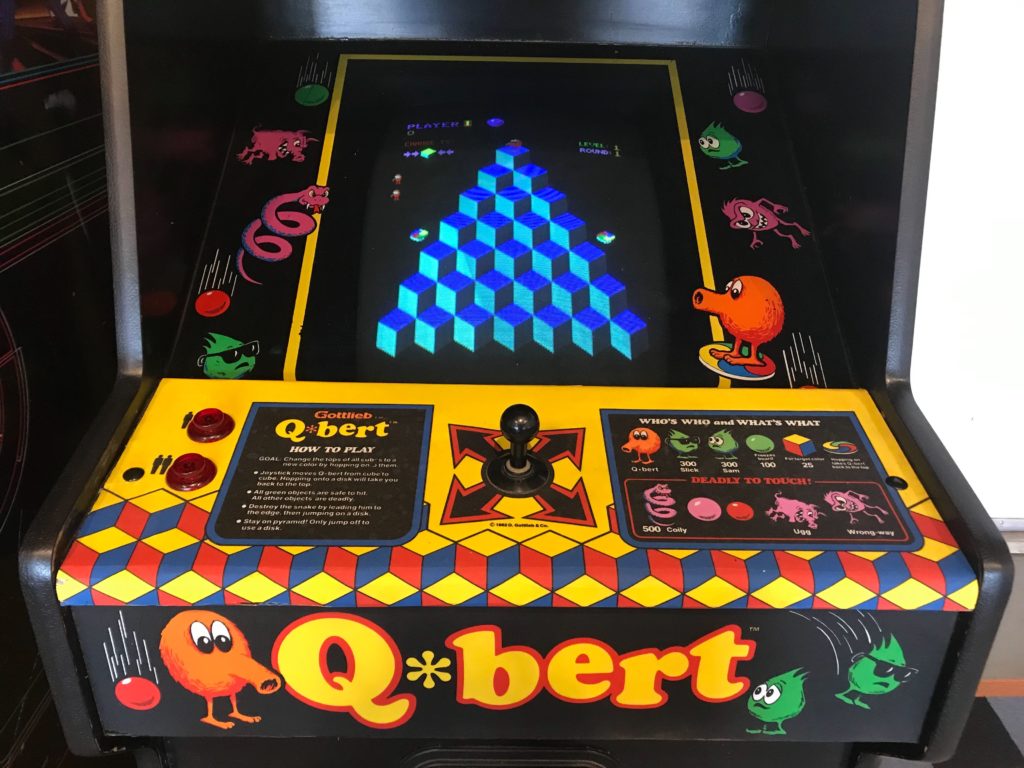 As you can see from the images the cabinet is mint, and is a fine addition to Reclaim Arcade. 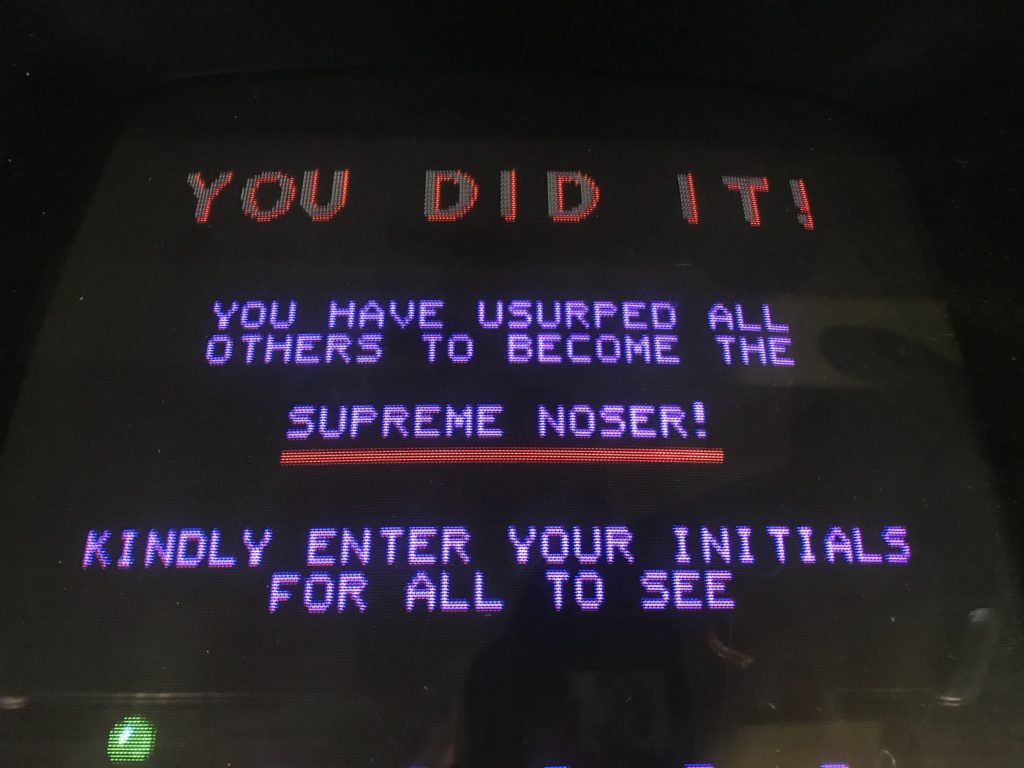 And not to be outdone by himself in one weekend, Tim picked up a second game this weekend, namely Ninetendo’s Popeye (1982). Popeye is unqiue in that the player cannot jump, but only punch, and for me it was one of the better ports for Atari 2600. I was a big fan of this game, and despite it being a Donkey Kong knock-off (in fact Donkey Kong and Pac-man were influenced by the Popeye cartoon—the power-ups in both Pac-man and Donkey-Kong akin to a spinach infusion) because I loved who well drawn the cartoon characters were in the game. Not to mention the fact you would run around collecting music notes and hearts being thrown by Olive Oil. As the pictures below will attest, like Q*bert, this cabinet is in pristine shape, and what started as a simple purchase of Centipede has become something of an addition, though Tim cleaims he can stop at any point 🙂 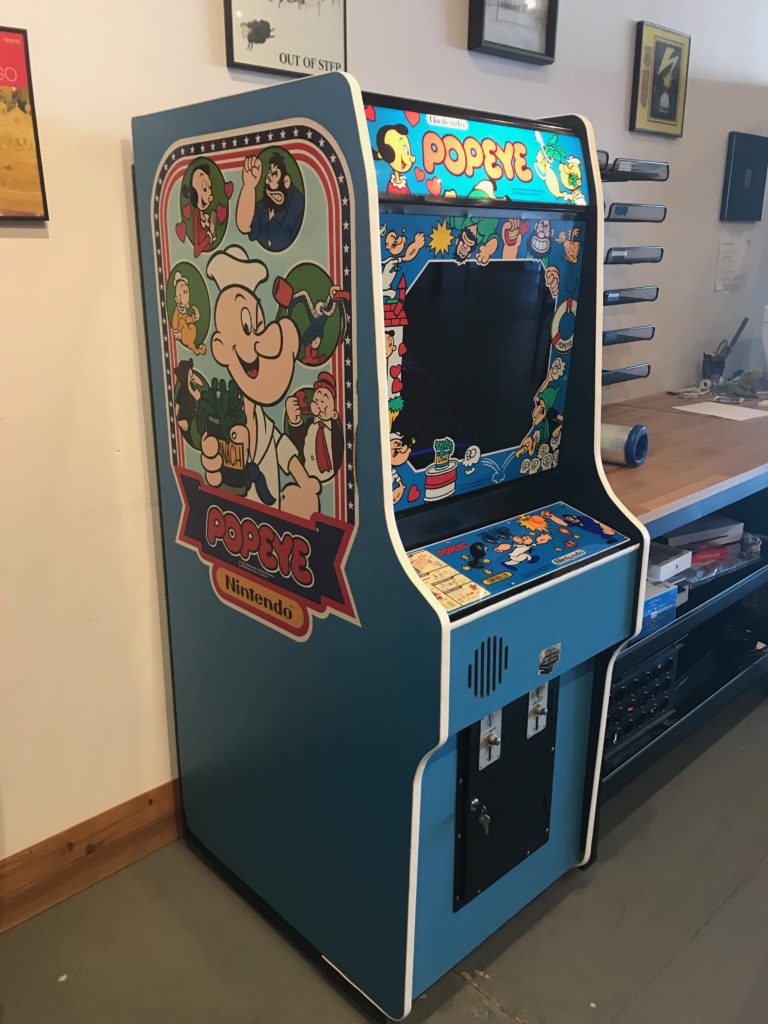 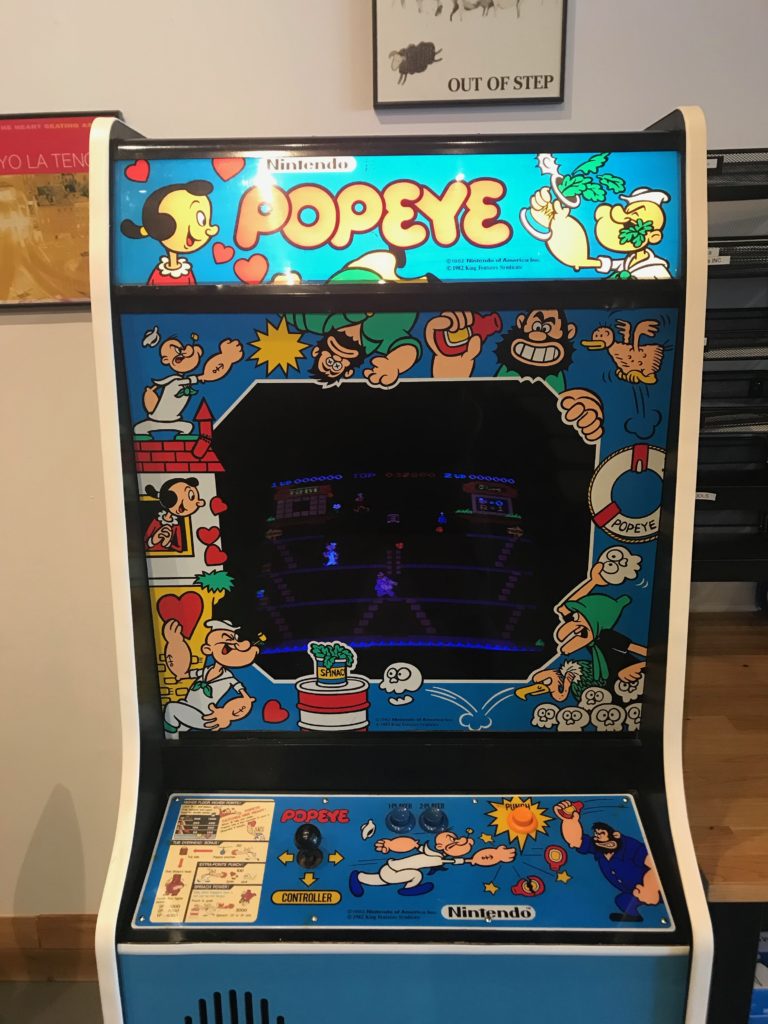 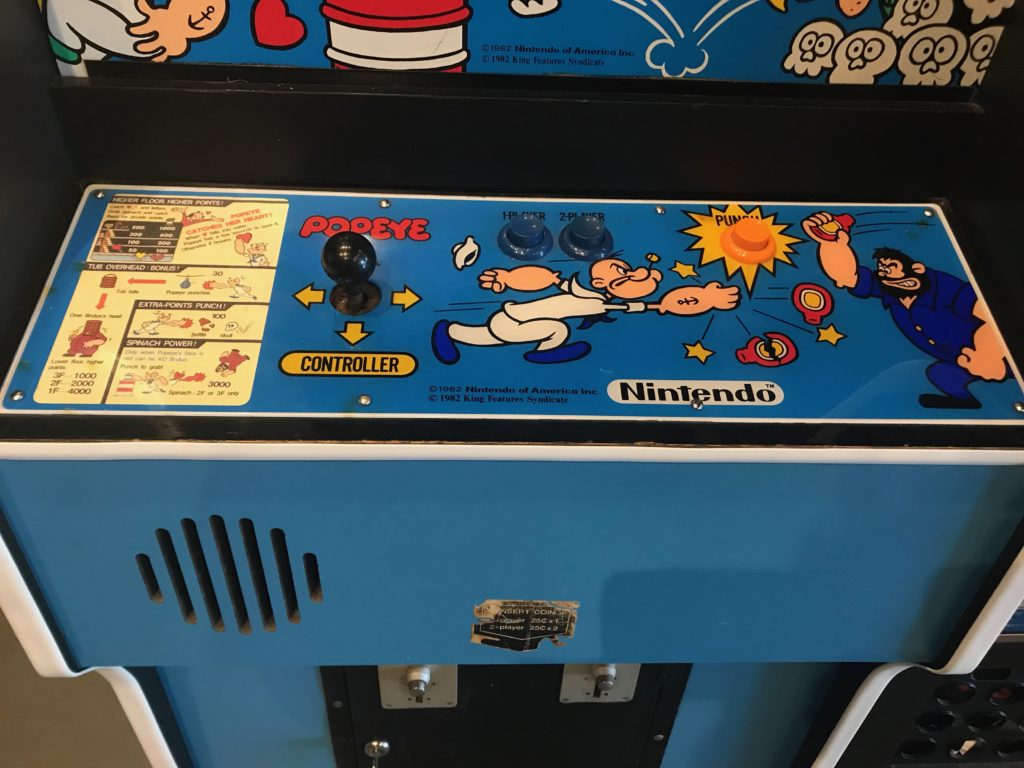 All of this begs the point what to do with these cabinets, and the obvious answer is to create an arcade. We are currently looking at some space and I do think the next logical step for us is to get even more cabinets and open up a full blown arcade in Fredericksburg. We are not necessarily in a rush, we need a place to put them more than a business model at the moment, but the idea of having a fully functional arcade to complement our VHS store would be pretty freaking amazing, if I have to be honest.

This entry was posted in Reclaim Arcade and tagged CoWork, reclaimarcade, video games. Bookmark the permalink.

10 Responses to Does 15 cabinets make an arcade?