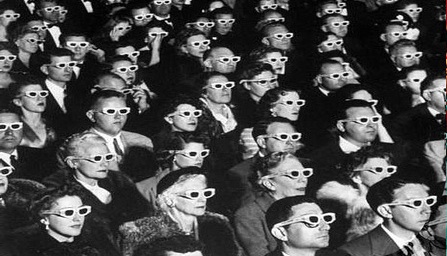 I’m getting deeper and deeper into this issue of Filmfax, and I have to say it’s a gem. I just finished the first installment of Vincent Di Fate’s “3-D Cinema: Yesterday, Today, and Tomorrow” which gave a nice overview of the technical details behind the emergence of 3-D cinema during the 1950s. I love this kind of stuff, replete with cool sidebars detailing the history of stereoscopic film-making pre-1952 as well as the time capsules listing the significant historical events of 1952—the year 3-D broke wide open. (Did you know 1952 was the year news of (Christine Jorgenson)’s “sex-change” in Copenhagen, Denmark took the US media by storm? This will be my next post 🙂 ) And the article ends with a comprehensive list of the 28 3-D films that were released from December 1952 through December 1953. I love films lists, and this one backs a bunch I would have loved to have seen in cinematic 3-D: Bwana Devil, the John Wayne vehicle Hondo, House of Wax, It Came from Outer Space, and I, the Jury, and truth be told I would have seen every last one, but the the 1954 Creature from the Black Lagoon would be highest on the list—those underwater shots remain some of the most magic in all of film for me.

And it’s the magic of film where this post is trying to go. As you can tell this article is the whole enchilada, historical overview, technical detail, film list, historical time capsule, etc., but what utterly blew my mind in this article was the four or five paragraphs of pure poetry which the author stuck right in the middle when trying to explain how the already dream-like state of sitting in a cinema watching a film is further augmented by the experience of 3-D, and while framing his discussion he captures and articulates the real power of watching film in a real theater on a real screen in real 3-D:

But there was another dimension to all of it [3-D cinema], if you’ll pardon the expression; something surreal and deeply rooted in the human psyche…..a lucid dream is most unlike a common dream, for it is an experience wherein the dreamer is self-aware, is conscious of the fact that she or he is dreaming, and in which the dreamer often has the power to control the events of the dreaming experience. Film passes through the “gate” of a motion picture projector at a rate of 24 frames per second. With video, this frame rate is 30 frames per second. Thus, watching a film in a movie theater, as opposed to viewing it on a TV Screen or a computer monitor, allows the view to see more “black”—or more correctly—to see less image….In the particular case of a 3-D film, however, if polarizing filters are added at two locations to the projection process—at the exit point of the projector, and at the polarizing lenses of the glasses one wears while viewing 3-D film—the viewer has seen even more “black” than when watching a conventional film. To my point, watching a movie in a theater is more like being asleep and dreaming, thus creating a deeper, more intimate, and more involving experience. And watching a 3-D movie, because of its vivid, though not entirely natural simulation of the three-dimensional universe, is more unusual and dreamlike still….the many tip-offs that this is real yet not real is another way in which 3-D movies are like lucid dreams that we fully recognize as dreams while we’re dreaming them, even though we are asleep.

This is an abusively long and hacked quote I know, and it doesn’t do the original justice to be sure, but I had to write it here because it so beautifully nails so many of the most powerfully seductive elements of cinema, in the true sense of that word, as an almost immediate slip into another state of being. A space between consciousness and unconsciousness, this in-between and fecund ( 😉 ) space of visual and mental immersion in a narrative that you are constantly aware is both real and unreal—so akin to that dreamlike state, and 3-D just heightens that whole experience.

Now I know so many film theorists have written about film and dreams, and the idea is nothing new per se. But what I love about this article, and Filmfax more generally, is the way these ideas are brought to you from a diversity that is so hard to find amongst film scholars and academics. Rather than a defined and impregnable vocabulary surrounding film and theory (which I admittedly love) this article strikes right at the intersection of our shared experiences with dreams as humans, the material conditions of the technology, as well as—and most importantly—the sheer and utter wonder of watching a film in a movie theater. That is such a unique and powerful was to address this deep and continued nostalgia I have for the single screen, movie houses that shotgunned light through celluloid in a cavernous auditorium. There is no real theory for that feeling, there is no real way one way or vocabulary hrough which we understand dreams, or film for that matter.

1 Response to Dreaming in 3-D