Erland Van Lidth is in my mind the b-movie equivalent to a John Cazale. Cazale has one of the most remarkable, and tragically short, film careers in history. He was in five films before his untimely death, all of which were nominated for the Academy Award for Best Picture, and three of which won. Those films in order: That is an insane list, and I will leave Godfather III out of that list because he had no say whether or not he could be recut into that mess. Cazale in many ways embodies everything great about 1970s Hollywood, an emotionally reactive force tied up in slender, intense frame—a character actor for the ages and one whose short career rivals the longest and most accomplished of any actor of his time.

Cazale is in a place by himself in my mind, right up there with Harry Dean Stanton. So it might seem odd that I always associate Erland Van Lidth, a relative unknown to many, to Cazale, who by all accounts was an artist of the first order. But van Lidth is an interesting story in his own right, and he in many ways stumbled into acting on account of his rather unique physique. Van Lidth studied computer science at MIT during the 1970s, was a world-class heavyweight wrestler, and all the while was working towards becoming a heldenbaritone (or an opera singer whose particular voice is associated with the works of Wagner). How do you like that crazy combination of abilities and talents? What’s more, Van Lidth was discovered by a casting director in NYC during the late 70s, and started his own very short, but at the same time quite remarkable, movie career, becoming the face of some of my favorite films of the late 70s and early 80s. 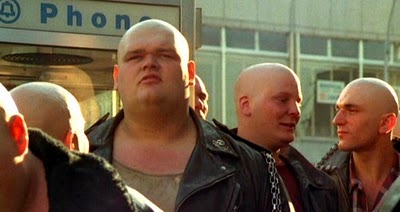 His first film was Philip Kaufman’s The Wanderers (1979), and he played one of the most memorable characters I have yet to encounter in all of film: “Terror” —the leader of the Fordham Baldies.  And when you watch the following clips (both of which feature Terror towards the end—the first shows him inhaling a slice of pizza and the second features him in a gang faceoff) you’ll now exactly why I feel this way about him.

The visage of Terror was forever burnt on my mind after watching The Wanderers for the first time, and it is a face I still can’t shake—not unlike Jaws from Moonraker (1979). He is one of the wildest looking cats ever! 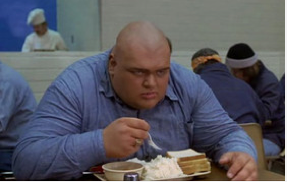 Soon after I saw Van Lidth as Terror in Wanderers he showed up again in one of my favorite movies of the early 80s, Stir Crazy (1980). How can you help but love the comic pairing of Gene Wilder and Richard Pryor? Add to that the character actor Van Lidth as the golden voiced homicidal maniac Grossberger, and you have one of the most memorable, but all too forgotten, comic scenes from 80s film:

After Stir Crazy Van Lidth teamed up with what might be the greatest cast 80s slasher film of all time, acting alongside Jack Palance, Martin Landou, and Donald Pleasance in a little known gem of a movie called Alone in the Dark (1982). It is one of the most underrated slasher films of the 80s, but has a solid cult following amongst b-slasher fans, and this one is up there with the original Halloween in my mind. Not only that, but it is absolutely hysterical at the same time, take for example this scene with Martin Landou (that also features Van Lidth and Jack Palance) going nuts over stealing a mailman’s hat.

This is 80s direct to VHS cinema at its finest!

And last, but not least, Van Lidth starred as Dynamo, the electrically charged opera-singing stalker in the Schwarzenegger vehicle The Running Man (1985). He actually does the opera singing—which is the second time his voice talent is featured on film—but he, like everyone else in the film, is a victim of one of the coolest ideas from a King novella sacrificed to a terrible adaptation. But with all that said, it was his film swan song, and being an electrocuting opera singer that zooms around in a miniaturized bat mobile is pretty cool gig no matter how you cut it. 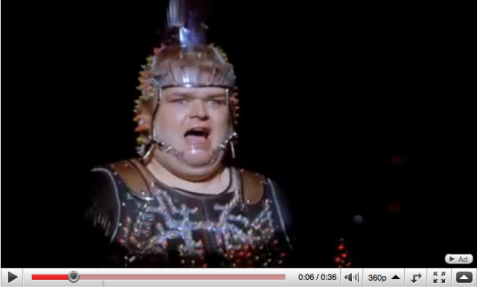 And there Van Lidth’s career is tragically foreshortened by heart failure at the age of 34, leaving behind a wife and newly born child. I don’t know why this actor speaks so deeply to me about the idea of a career, being many things at once, and leaving some kind of record of ones very being—but he does, not unlike the great John Cazale.

25 Responses to Erland Van Lidth, a.k.a Terror, Grossberger, and Dynamo