Freud, der unheimlich, and the importance of aesthetics 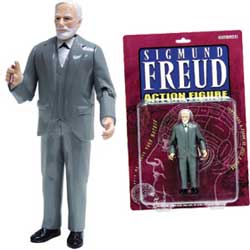 I have been following twitter as a late night activity these days because I just haven’t had time to play along -to my great detriment. Gardner posted a really interesting question: “what if we approached pedagogy as a design problem?” (I believe he was referring to (or quoting?) a book he referenced titled Emotional Design: Why We Love (Or Hate) Everyday Things by Donald A. Norman. I saw this, silently del.icio.us’d it my brain, and then headed over to Abject Learning so I could read the comments (see, when I read a blog -and admittedly do not read nearly enough- I don’t just RSS it, I drop physically in on a consistently irregular basis -kinda like a parole officer). I had a moment of convergence with one of Brian’s post and was remarking on the fact that he had his finger on the pulse of the web to such a degree that it was uncanny -and for good measure I threw in Freud’s notion of the unheimlich. Brian’s remark about this term made me think about it in relationship to Gardner’s tweet (the circle is complete).

Unheimlich is often translated as the English word uncanny. However, the German term according to Freud has two competing meanings in relationship to its root heimlich, which means homey, comfortable, and friendly and a competing, less common, meaning of the root is concealed, secret, and deceitful. Unheimlich can mean unfamiliar, uncomfortable, and eerie. Or, it can also mean (less commonly) what is supposed to be kept hidden but is inadvertently revealed (take a look at some class notes for a Washington University lecture on Freud’s essay for an interesting framing of this essay here).

Why all this? Well, first to let Brian know I really don’t know exactly what unheimlich means, or if it is even translatable. Second, I think Freud’s reading of this concept as a space where a perceived lack of connection between the discipline of psychoanalysis and the philosophical questions of aesthetics comes together in generative ways, which in turn makes me think of the often distinct relationships between pedagogy and aesthetics that Gardner often refers to (recognizing fully that I am now conflating design with aesthetics here for my own purposes). Here’s is a quote from Freud’s essay on the Unheimlich:

It is only rarely that a psycho-analyst feels impelled to investigate the subject of aesthetics, even when aesthetics is understood to mean not merely the theory of beauty but the theory of the qualities of feeling. He works in other strata of mental life and has little to do with the subdued emotional impulses which, inhibited in their aims and dependent on a host of concurrent factors, usually furnish the material for the study of aesthetics. But it does occasionally happen that he has to interest himself in some particular province of that subject; and this province usually proves to be a rather remote one, and one which has been neglected in the specialist literature of aesthetics.

The subject of the ‘unheimlich’ is a province of this kind. It is undoubtedly related to what is frightening â€” to what arouses dread and horror; equally certainly, too, the word is not always used in a clearly definable sense, so that it tends to coincide with what excites fear in general. Yet we may expect that a special core of feeling is present which justifies the use of a special conceptual term. One is curious to know what this common core is which allows us to distinguish as ‘unheimlich’; certain things which lie within the field of what is frightening.

As good as nothing is to be found upon this subject in comprehensive treatises on aesthetics, which in general prefer to concern themselves with what is beautiful, attractive and sublime; that is, with feelings of a positive nature; and with the circumstances and the objects that call them forth, rather than with the opposite feelings of repulsion and distress. I know of only one attempt in medico-psychological literature, a fertile but not exhaustive paper by Jentsch (1906). But I must confess that I have not made a very thorough examination of the literature, especially the foreign literature, relating to this present modest contribution of mine, for reasons which, as may easily be guessed, lie in the times in which we live; so that my paper is presented to the reader without any claim to priority.

Aesthetics as a theory of “the quality of feeling”? How often is an instructor asked to investigate this subject in relationship to their course design, the built environment for teaching, as well as the framing of the experience that fosters the possibilities for an aesthetic experience. Moreover, might this open up larger questions surrounding an aesthetics of pedagogy that reinvokes the vital importance of the nature by which we feel in relationship to the ideas we are examining in detail. Does this transform the classroom into an opinion-based therapy session? On the contrary, it cultivates the idea of feeling in relationship to this term quality that is important on two crucial levels: first, as a specific, well-articulated kind of feeling, and secondly as a specific, well-defined and articulated examination of the critical relationship between an understanding of feeling and the aesthetic concepts of taste, judgment, and value.

The best part of all of this is that Freud’s work goes on to frame the term unheimlich by offering a close reading of E.T.A. Hoffman’s story “The Sandman” (Der Sandmann). Providing a model for one such approach to reading literature through the aesthetic lens of what was, as evidenced by Freud, an ostensibly disconnected discipline such as psychoanalysis (interesting how students of literary studies might take this way of reading for granted today).

This entry was posted in Uncategorized and tagged aesthetics, design, freud. Bookmark the permalink.

6 Responses to Freud, der unheimlich, and the importance of aesthetics