Got My Head in the Cloud: Udell on Domain of One’s Own 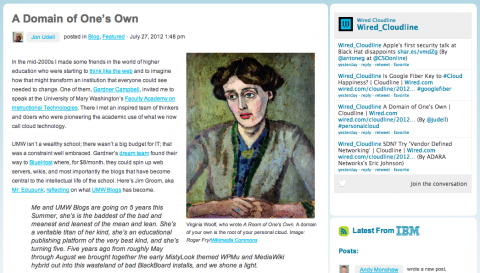 Jon Udell blogged about the history of an experiment that is finally taking root here at UMW. The pilot is the dry run for giving every Freshman their own domain and web hosting space by Fall 2013 in order to embrace and encourage students to becomes master’s of their own spaces, and get in the habit of maintaining their own personal archive of work. It will be built into the curriculum of a number of courses, and it’s a model of that ask students to take responsibility of their digital presence. To manage their online identities and build it so that they can take it with them when they go. Also, it pushes courses to acknowledge and embrace the open web as an integral part of the of the process of teaching and learning in a classroom or online.

What this means is that universities have to start thinking more like the web, but not in the catastrophic terms of MOOCs and the end of institutions, but rather in terms of understanding how networks and networked culture can change our understanding of sharing, transparency, privacy, and building collaborative infrastructure (Jon Udell’s talk back in 2009, The Disruptive Nature of Technology, is a brilliant framework to oeprate from here if you’re looking for more). How can IT organizations like UMW’s DoIT, head up by CIO Justin Webb be on board with something like Domain of One’s Own? I don’t know, but UMW’s IT organization is! This is not a radical, subversive pilot behind IT’s back, this is a pilot the CIO not only sees promise in, but also funded it outright. DTLT and the Department of Information Technologies are partners in  pretty powerful ways—that is an amazing thing to be writing on this blog! It’s actually a great day in that regard. So major kudos to Justin Webb.

What’s more, Tim Owens came to UMW little over a year ago and rebooted the whole pilot (talk about a shot of adrenaline!), got the server up an running, learned how to be a sysadmin for 300-400 people, groked the tech immediately and made it transparent for every one. This is one guy? And moving into this semester—nevermind him blogging on the Makerbot blog about UMW’s Maker Space—he’s got the Domain of One’s Own project well in hand. We are working on documentation and a introductory video as we speak.

I got my head in the clouds right now, Domain of One’s Own is more than a dream and Jon Udell is blogging about it! That’s a good omen, and one that I hope frames the long and distributed life of an idea that UMW’s current perfect storm has been able to make official and legit. This is very good.

What’s more, do a quick google search for Domain of One’s Own (no quotes).  We also are the top 5 out of 47 million possible hits. Google juice. 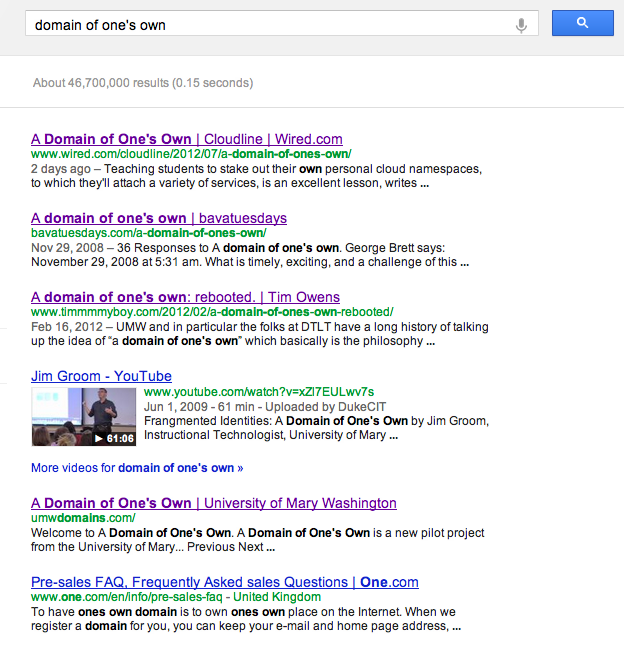